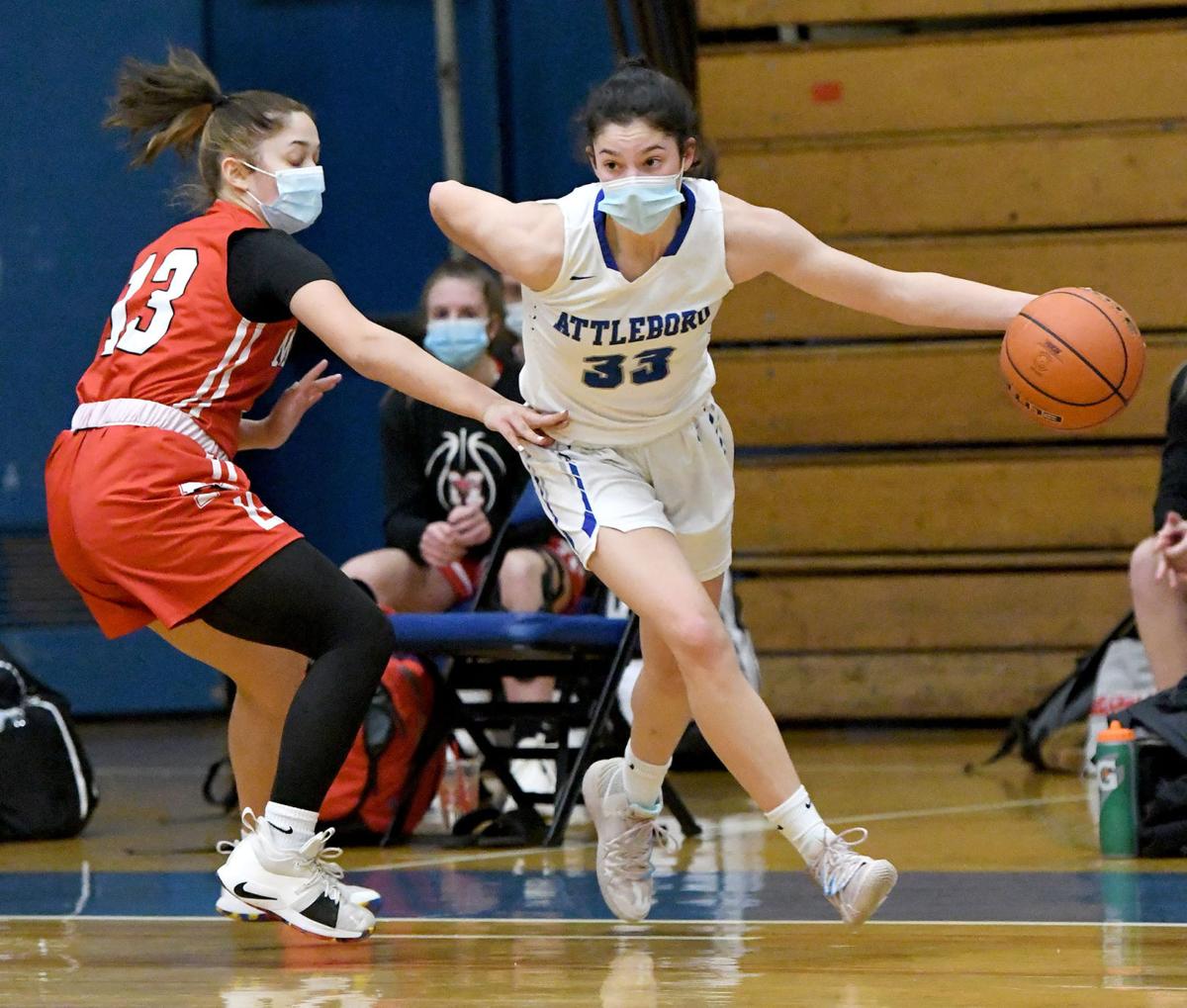 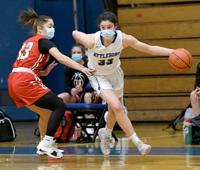 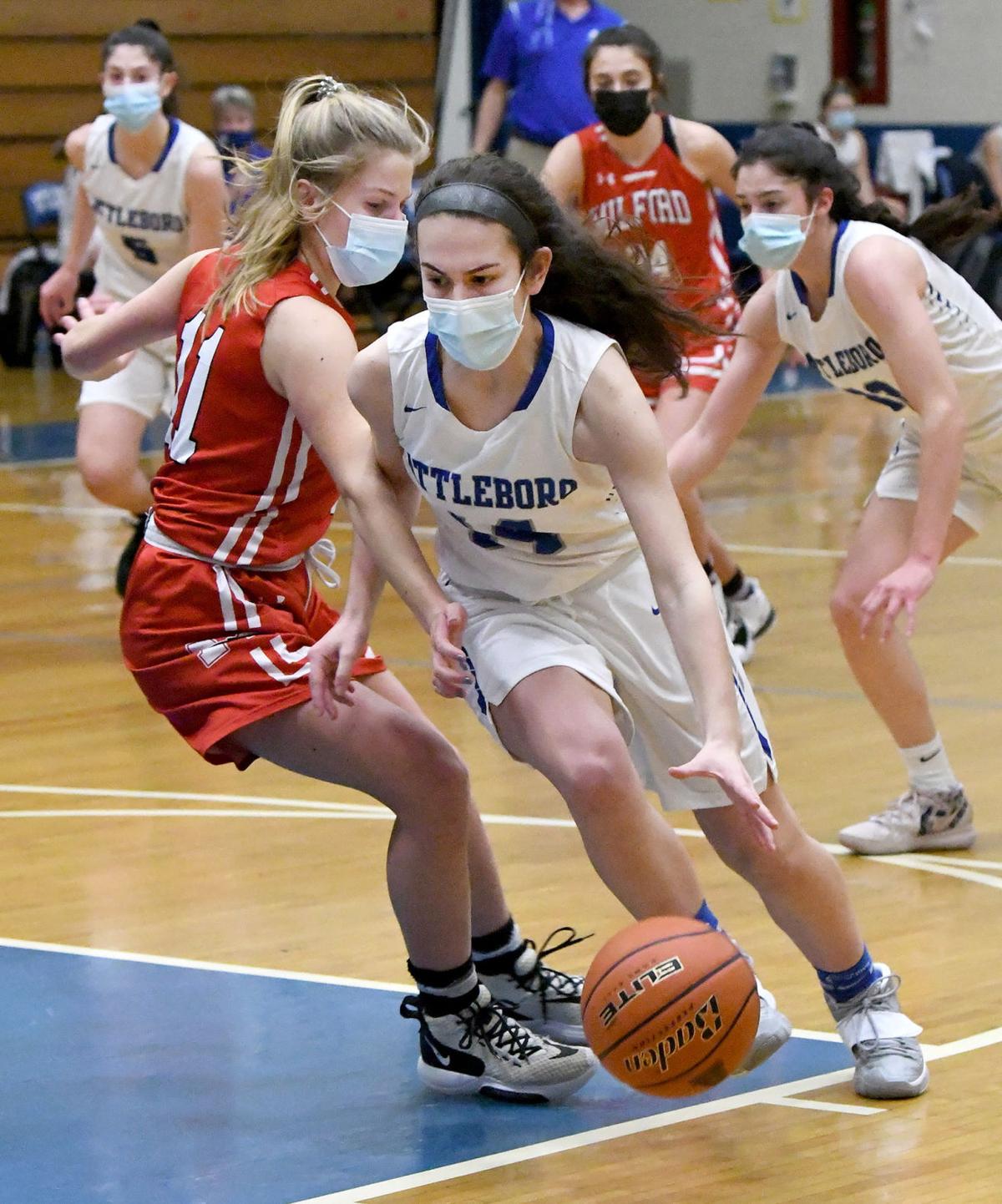 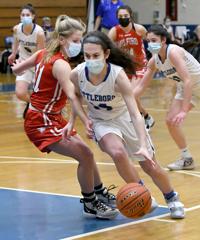 ATTLEBORO — With merely one scrimmage and with an extra week of practice on the calendar, as a pair of Hockomock League contests with Taunton were scratched due to the coronavirus protocol, the Attleboro High girls’ basketball team couldn’t wait to take to the floor to play an actual game.

That energy was exercised all through the lineup, as nine players produced points, guided by a career-best 24 points from junior forward-center Meghan Gordon in a 71-39 season-debut victory over Milford Tuesday.

The Bombardiers, though tied twice within the first four minutes, never trailed, created a 33-19 lead by halftime, and then used a superlative 26-point third quarter to take a 30-point (59-29) lead into the final eight minutes of play.

Gordon scored 10 of her points in that third quarter for AHS, as the Bombardiers hit on 11 of 18 shots from the floor in the contest while converting eight Milford turnovers into 15 points.

“We’re playing to our strengths, this is one of the most athletic groups that I’ve ever coached,” AHS coach Marty Crowley said of the contributions.

The Bombardiers are coming off of a 10-win season in which they qualified for the MIAA Division 1 South Tournament, and a half-dozen veterans from that team return to the floor.

Gordon also took down 11 rebounds for AHS. Freshman Narissa Smith, in her varsity debut, was dazzling in scoring 16 points, hitting six shots from the floor, creating five steals and taking down four rebounds.

AHS was at its best in the third quarter, scoring 13 straight points in one four-minute span, 11 of those coming off of Milford turnovers. Smith scored off of a steal and then drove to the basket for two more points to begin the surge. Gordon scored six points in the span, two at the charity stripe, while Smith hit a trifecta, one of three that Attleboro had in the game.

“Milford is scrappy, they’re tough and every time that they put a run on us, we pulled away,” Crowley added.

AHS took control of its destiny by scoring eight straight points in the first quarter to break a 5-5 tie. Gordon scored in low off of a pass from Narissa Smith. Lindsey Perry (eight points) drained a 16-foot jumper, and Emma Reilly went backdoor for a bucket off of a pass from Perry. Then Perry knocked down a 14-footer from the right side.

Then the Bombardiers scored the first nine points of the second quarter. Ryan Johnson converted an offensive rebound; Gordon fetched a defensive rebound at one end of the floor and scored on a drive through the lane at the other end; senior captain Gabby Bosh finished off a fast break with an assist from Gordon; then Hailey Perry drained a 3-pointer from the right side to build a 22-11 advantage.

AHS finished the first half with a flurry as Smith fired in a trifecta, Hailey Perry hit two free throws and Kayla Goldrick finished off a steal.

The Bombardiers might have had more too. Their man-to-man defensive pressure resulted in 11 first-quarter Milford turnovers, but AHS converted just three of those into points. The Bombardiers limited Milford to just eight shots from the floor over the first eight minutes too, while then reducing the Scarlet Hawks’ accuracy rate to 3-for-11 in the second quarter.

“We scrimmaged Franklin, and we’ve been scrimmaging among ourselves, but you get to a point where you want to play somebody,” Crowley said. “We didn’t have a lot of game experience. Once we got going, we moved the ball well, we shared the ball very well — that’s a lot of points.” AHS has a rematch with the Scarlet Hawks on the road Thursday.