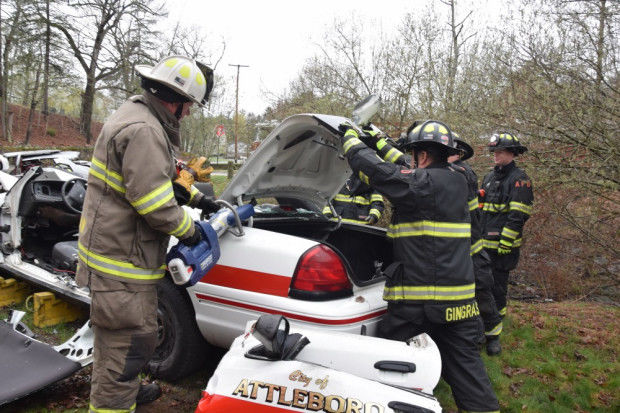 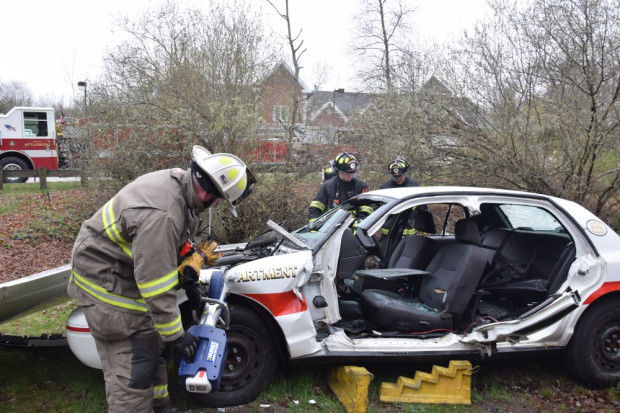 An Attleboro firefighter cut into the wheel well of a car during training on new battery operated cutting tools, Saturday. (Ben Skerker photo)

An Attleboro firefighter cut into the wheel well of a car during training on new battery operated cutting tools, Saturday. (Ben Skerker photo)

aTTLEBORO - The mobility of cordless drills and saws used in the construction industry and for home repairs is now moving to the lifesaving tools used by firefighters.

Attleboro Deputy Fire Chief Scott Jacques said the department has purchased new battery-operated cutting and prying version of the Jaws of Life that will replace the hydraulic cutting tools that have been used for decades.

He said the new tools are more mobile and faster to set up than their hydraulic counterparts.

An entire shift of firefighters trained on the new tools Saturday afternoon at the South Attleboro Fire Station as crews cut apart an old Ford passenger vehicle that is no longer used by the department.

Another shift is expected to train on the equipment Sunday when members cut up another vehicle.

When a fire company arrives on the scene of a car crash where power tools are needed to extricate a victim, firefighters have to pull out a heavy gas-powered powerplant and lengthy hydraulic hoses and then run them to the vehicle that needs to be cut into.

The new tools eliminate the powerplant and the hoses. Jacques did not have figures on the total cost of the new gear.

North Attleboro Deputy Fire Chief Ron Darling said North Attleboro has purchased one battery-operated tool at a cost of almost $10,000. He said the tool that was purchased is a combination cutting and spreading tool-in-one and will be housed on an engine assigned near the Emerald Square mall on Route 1, or the Kelly Boulevard station.

Darling also said North Attleboro is looking to purchase a second tool in the near future so engines assigned to each outlying station are equipped with the tool.

Darling said the battery-operated tool will be very useful if firefighters ever need to use cutting equipment inside a building.

He said the hydraulic equipment will remain housed in an engine at North Attleboro fire headquarters because it's a fairly extensive set of tools, and was purchased in 2012 and can run two sets of tools at once.

Jacques, the Attleboro deputy chief, said that from the moment crews arrive on the scene of a crash, they should be able to pull the new tools and have them operational in less than a minute, compared to four or five minutes with the hydraulic version.

He also said crews are limited by the length of the hoses, so if a vehicle was far in the woods, and beyond the 100-foot range of the current hydraulic hoses, firefighters would have to move the powerplant to get it closer to the vehicle.

The only downside that has been pointed out is the new cutting tools are slightly heavier than the hydraulic version.

Each cutting tool comes with two batteries, each capable of 45 minutes of running time, Jacques said.

The city also purchased new, longer "rams," which are tools used to lift a collapsed dashboard out of the way. The current ram is 31 or 32 inches in length and the new rams are 54 inches long, he said.

He also said for an extended operation, the tools can be connected to electrical extension cords and powered off of portable generators that are stored on each of the city's two ladder trucks.

He said one more shift of firefighters needs to be trained on the new tools, and new brackets have to be installed in each front-line engine, before they can be placed in service.

Jacques said the new tools will be in service very soon.