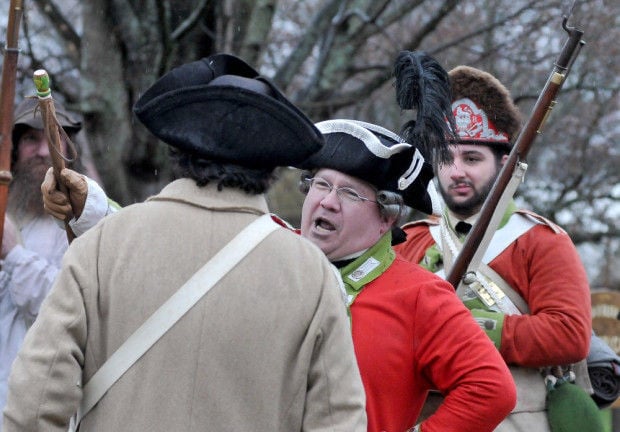 teven Gardner of Mansfield, CT, as captain in His Majesty's 54th Regiment of Foot, confronts the minutemen in North Attleboro Saturday. (Staff photo by Mark Stockwell) 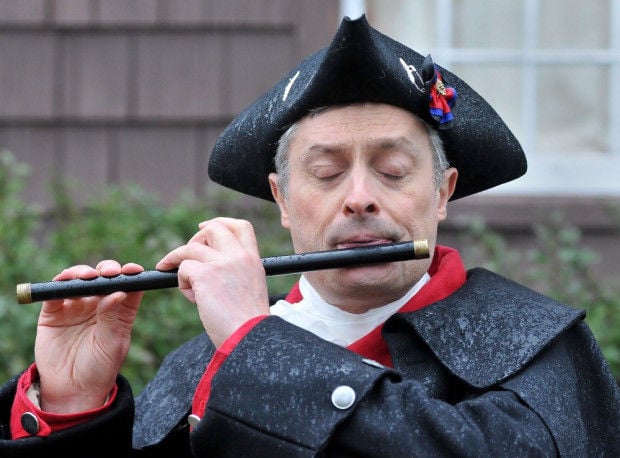 teven Gardner of Mansfield, CT, as captain in His Majesty's 54th Regiment of Foot, confronts the minutemen in North Attleboro Saturday. (Staff photo by Mark Stockwell)

NORTH ATTLEBORO - In the midst of the heavy morning rains that pelted the area, the Rehoboth Minutemen Company, 13th Continental Regiment, negotiated with British troops but declined to join the Loyalists at the Woodcock Garrison House - a clever Revolutionary War reenactment that drew a small but interested crowd of history buffs on Saturday morning.

The 13th Continental Regiment began the 30-minute reenactment from the Baptist Common, where they marched to the Woodcock Garrison House to meet with the British troops under the tent, trying to avoid the steady stream of raindrops that wilted the feather in the hat of "British" Capt. Steven Gardner, commanding the Redcoats, officially a battalion of His Majesty's 54th Regiment of Foot.

"Gentlemen, shall we get out of the rain and discuss this?" Gardner asked.

Capt. John Carr of the Continental Regiment led the negotiation talks, which failed, but both sides shook hands on not firing their muskets or engaging in any other hostile acts.

"I regret to say, sir, that we have to dissolve our friendship," Gardner told Carr.

Many observers watched from the dry safety of their cars pulled over to the side of North Washington Street, but a few in raincoats moved closer to the house's fence to get a better view of the action.

Originally, a larger skirmish had been planned in the reenactment, but the heavy rains forced a change of plans to the negotiation talks under the tent.

Umbrellas would not have fitted with the period costumes very well, but the wool clothing provided some protection from the elements, and Carr, a "student of history," was more than willing to carry on in the rain.

"It's just about stepping back from the modern lifestyle, and getting back to a simpler time," Carr said. "I like this time period - it's a simpler way of life; it's where our country began."

Gardner shared Carr's enthusiasm for the reenactments, which he has been involved with since the country's bicentennial in 1976.

"First and foremost, it's to socialize with my dear friends, and educate the children that come," Gardner, a Mansfield, Conn., resident, said. "It's fun to come here, even under a dismal, dreary, wet day. We make the best of it...there's a kinship and frienship."

North Attleboro resident Andrew McCormack, who had thought the reenactment had been scheduled for the previous weekend, was pleased that he hadn't missed the event.

"I thought it was great," McCormack said. "I didn't realize anyone did anything other than the Civil War...I think they really brought people back to their time period with their speech and the way they interacted with each other."

Anyone interested in joining the reenactments are encouraged to visit brigade.org and continentalline.org.