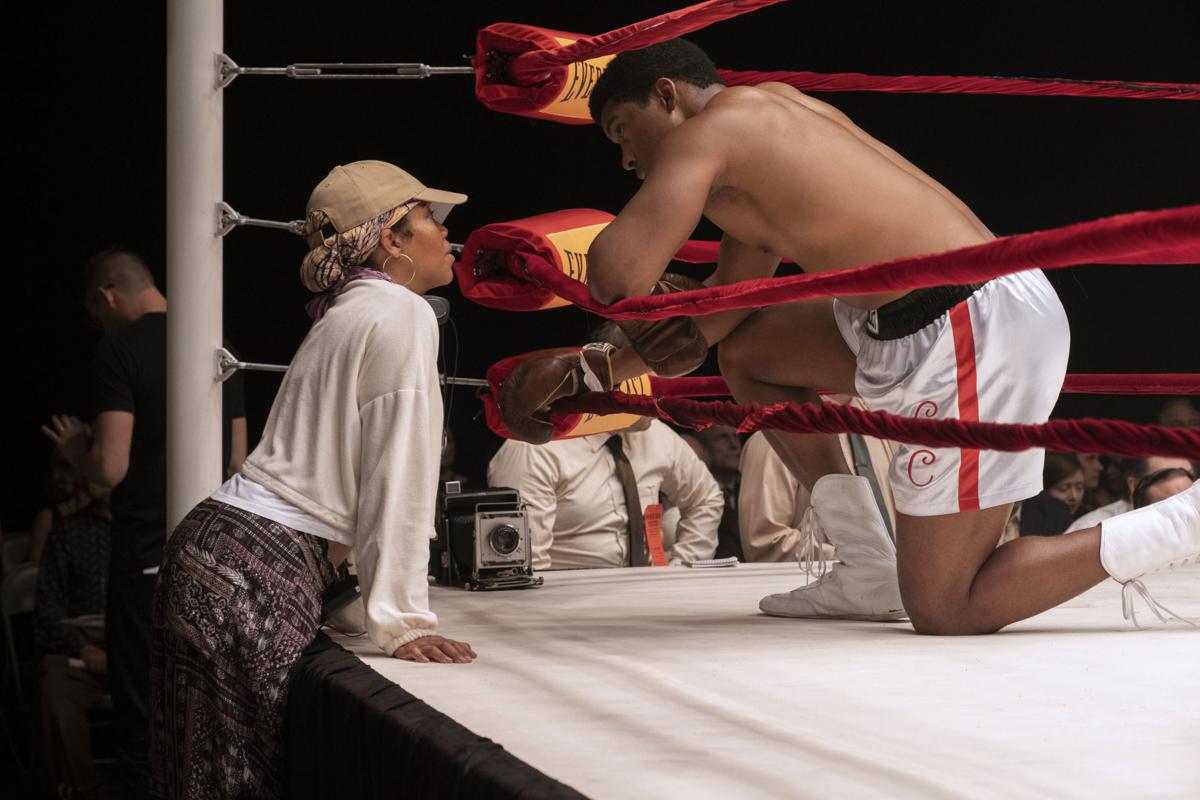 This image released by Amazon Studios shows director Regina King, left, with Eli Goreer on the set of “One Night in Miami.” (Patti Perret/Amazon Studios via AP) 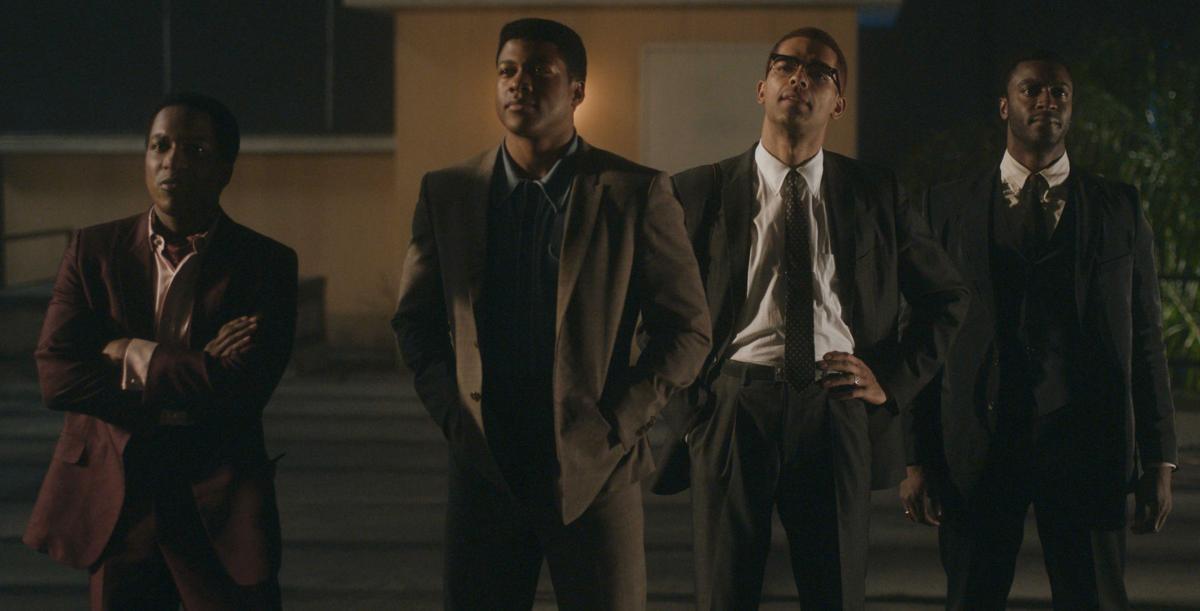 This image released by Amazon Studios shows Leslie Odom Jr., from left, Eli Goree, Kingsley Ben-Adir and Aldis Hodge in a scene from "One Night in Miami." (Amazon Studios via AP) 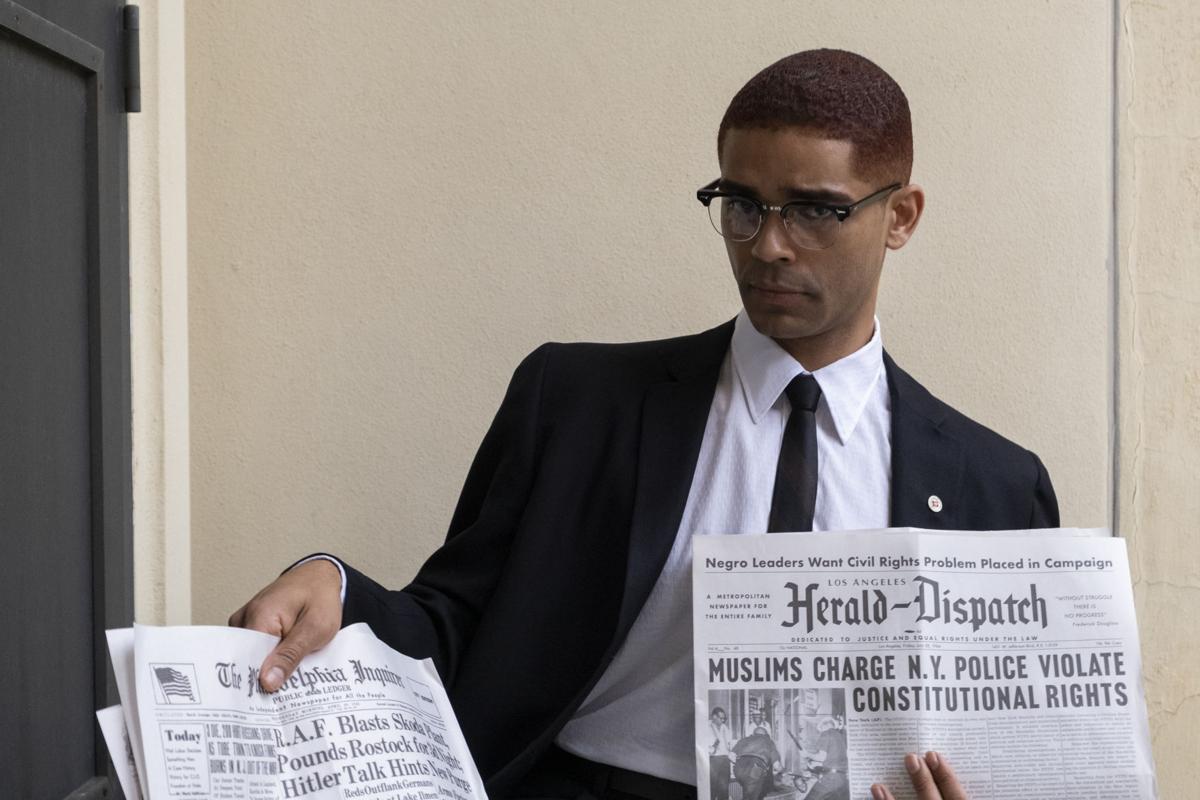 Kingsley Ben-Adir in a scene from “One Night in Miami.” (Amazon Studios) 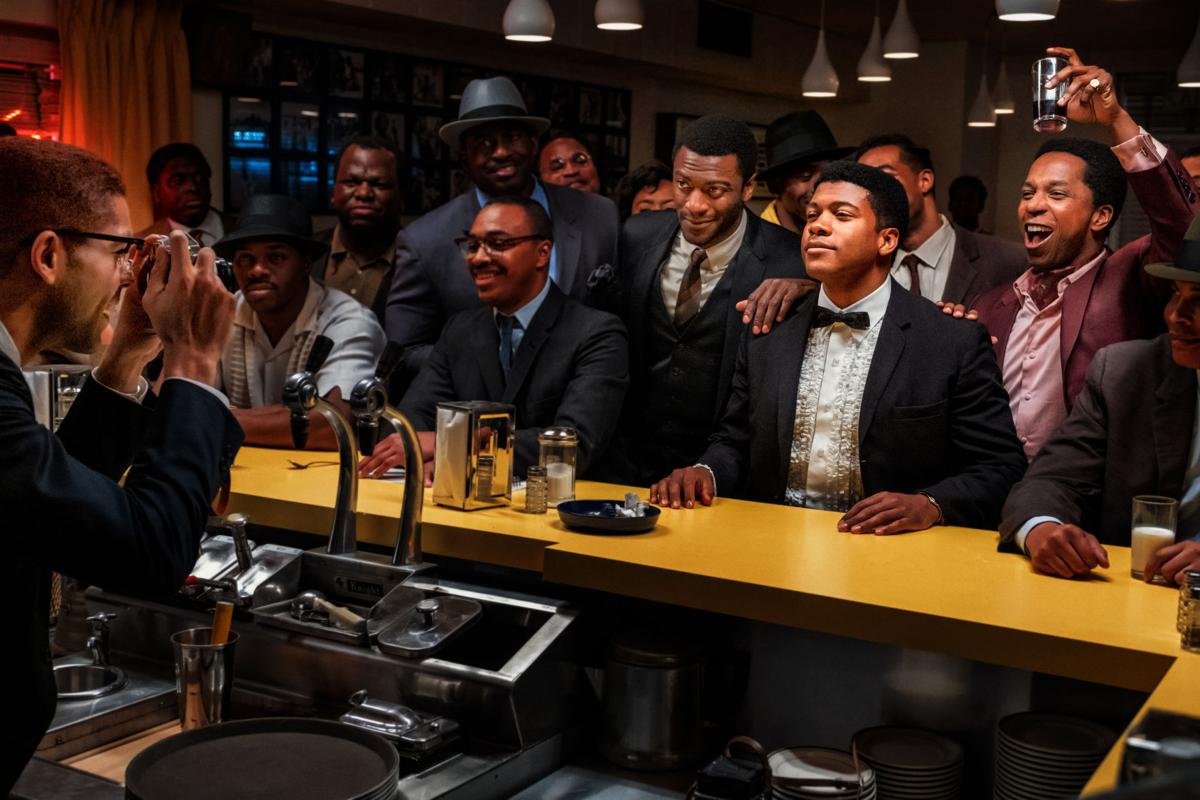 This image released by Amazon Studios shows, from right, Leslie Odom Jr., Eli Goree and Aldis Hodge in a scene from “One Night in Miami.” (Patti Perret/Amazon Studios via AP)

This image released by Amazon Studios shows director Regina King, left, with Eli Goreer on the set of “One Night in Miami.” (Patti Perret/Amazon Studios via AP)

This image released by Amazon Studios shows Leslie Odom Jr., from left, Eli Goree, Kingsley Ben-Adir and Aldis Hodge in a scene from "One Night in Miami." (Amazon Studios via AP)

Kingsley Ben-Adir in a scene from “One Night in Miami.” (Amazon Studios)

This image released by Amazon Studios shows, from right, Leslie Odom Jr., Eli Goree and Aldis Hodge in a scene from “One Night in Miami.” (Patti Perret/Amazon Studios via AP)

These words come from 1965 and from Malcolm X, two days before his political assassination. They appear on screen at the end of director Regina King’s “One Night in Miami”:

“It is a time for martyrs now, and if I am to be one, it will be for the cause of brotherhood. That’s the only thing that can save this country.”

Brotherhood, as the cries of the D.C. insurrectionists last week remind us, means different things to different segments of our citizenry. One of the great satisfactions of King’s film, a fine and fluid adaptation of Kemp Powers’s 2013 play, is its specific place in recent history and the way that place, that moment, speaks in fierce, eloquent opposition to recent tragic events.

From that informal motel-room summit, Powers wrote a fictionalized 85-minute one-act play, tightly confined and widely produced over the last decade. Powers, who co-wrote and co-directed Pixar’s “Soul,” adapted “One Night in Miami” the way so many playwrights do not: with an eye toward intelligent opening-up, without sacrificing the dialogue, the debates and some excellent actors’ prime opportunities.

Most of the movie still unfolds within that motel room. But Powers and King open up with Clay getting KO’d in a 1963 fight, followed by separate examples of what these four men are up against in their various lives and livelihoods.

The sharpest and truest-seeming of these introductions finds Brown, played with exquisitely effective minimalist strokes by Aldis Hodge, visiting a white family friend (cameo by Beau Bridges) on Georgia’s St. Simons Island. It’s just a minute or two of niceties and praise followed by a quick, brutal reminder of the caste system firmly in place. But it’s handled so off-handedly and truthfully, you know right off you’re in sure hands with this project.

The key square-offs among many in Powers’s play involve Malcolm’s eager recruitment of Clay to the Nation of Islam, although there’s a secret behind that, just as everyone has something heavy weighing on their minds.

Malcolm (Kingsley Ben-Adir, tightly coiled yet effortless) and Cooke (”Hamilton”’s Leslie Odom Jr., a vocal and dramatic ace) lock horns on issues ranging from Black Power and the necessity of militancy versus the value of crossover artists eyeing the white mainstream. “It’s not gonna always be the pop charts over here, black music charts over there,” Cooke says. “One day it’s gonna be one chart. One music, for all people.”

Meantime, Brown and Clay — “gladiators,” as Brown says, bitterly, battling on their respective battlefields — find themselves at two different crossroads. Brown has just completed his first movie, a western (unnamed, but it’s “Rio Conchos”), and eyes a career change. Clay is played by Eli Goree, a ringer vocally for the man who would become Muhammad Ali. He may be on top of his world at 22, but as Clay learns Malcolm’s plans … well, that’s one of the late-stage reveals in “One Night in Miami.”

Some of the writing remains explanatory first and dramatic second. But King, making her feature directorial debut, makes so many right decisions. The stakes are important, but the film is carried by a stream of small, acutely observed moments, and the way these actors move, converse, relate and enliven Powers’s best dialogue. It’s a case of getting the best of both worlds: a strong, mellow film of urgent, historically prescient ideas expanded from a juicy theatrical premise.

Visually it’s all of a piece, with the browns and avocado greens of the motel room interior creating a kind of womb for some difficult confrontations. King’s camera favors the slow lateral glide, which quietly energizes the conversation. Terence Blanchard’s score goes for solo jazz piano lines, nimble and expressive. This isn’t a full-orchestra kind of affair; it’s a jazz quartet of a play, and a movie, though there are other performers on the sidelines of the action, notably Lance Reddick as the steely, watchful bodyguard, Brother Kareem.

Powers has said that with “One Night in Miami” he wanted to write a play about “the Black Avengers,” four men championing and exemplifying different realms of Black struggle and achievement, while rallying for a common cause. That’s director King’s movie, too. I don’t know how long she rehearsed with her actors before shooting, but the results are seasoned and absorbing, and it’s as if they had all done the stage version together for years. And that’s high praise.

‘ONE NIGHT IN MIAMI’