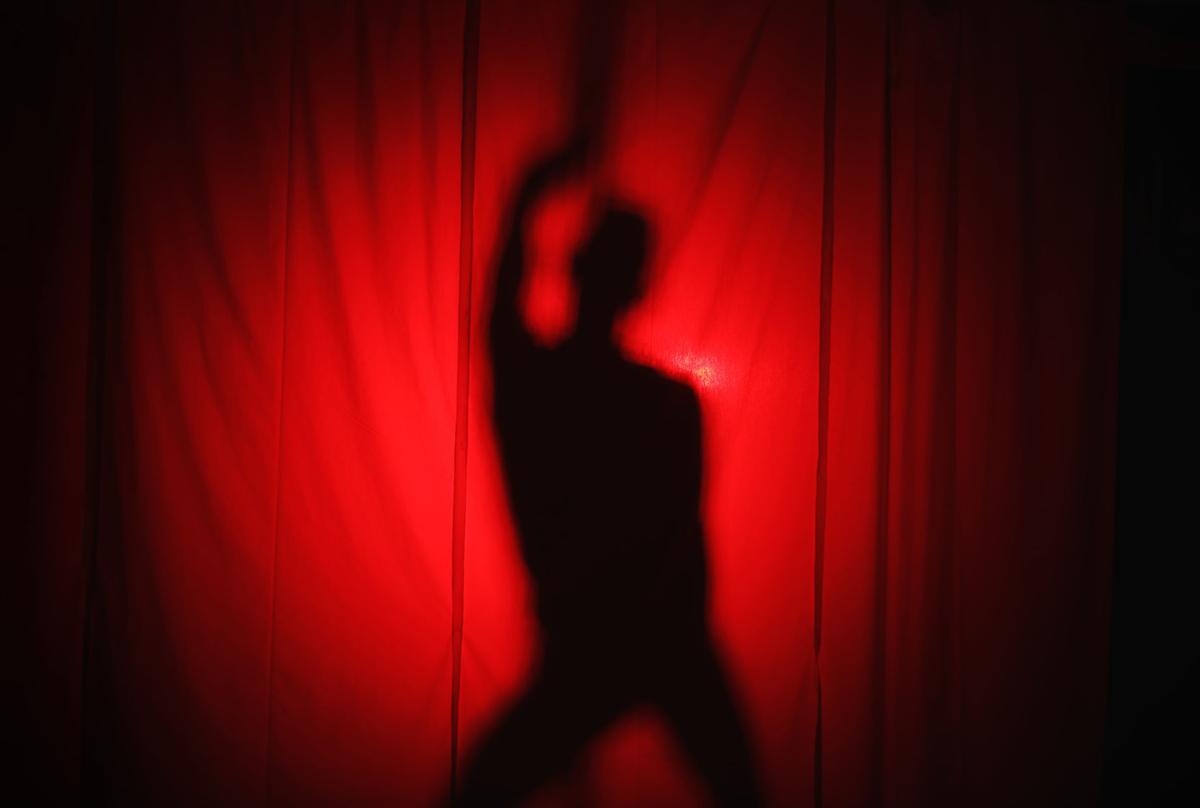 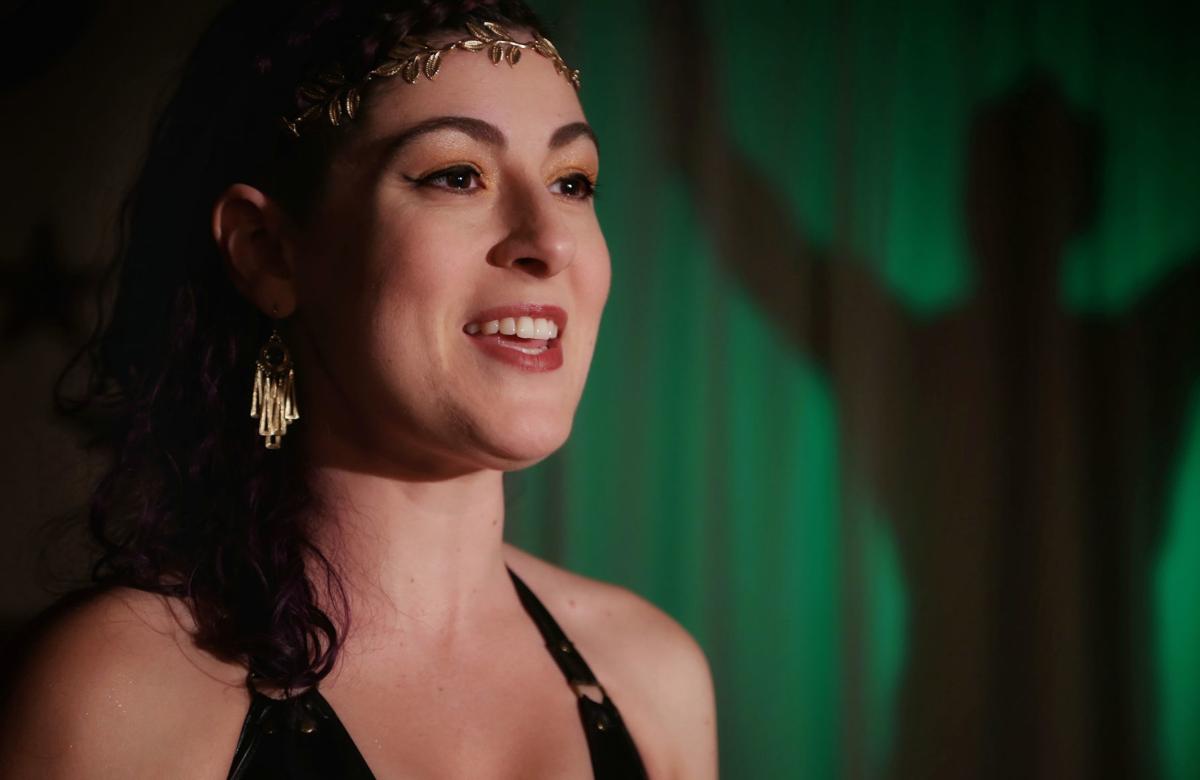 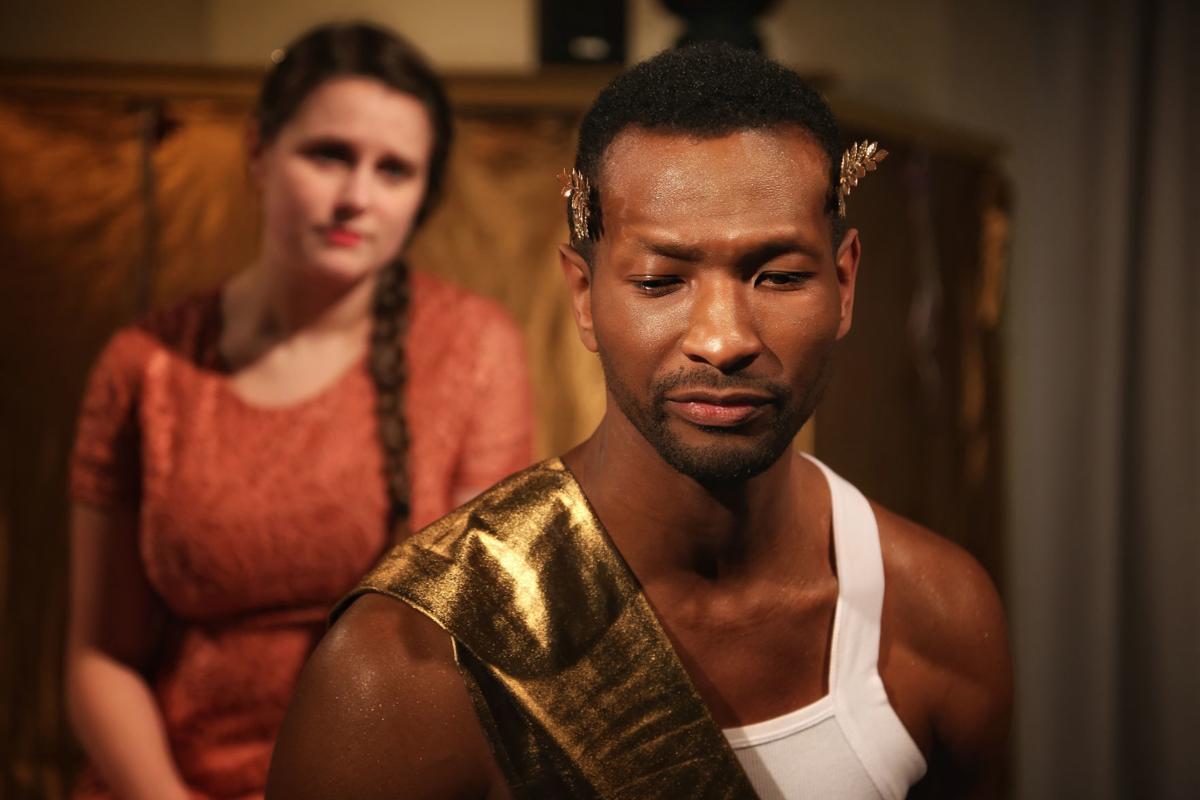 Sarah Quintiliani as Aphrodite and Court Stafford as Apollo in ACT’s production of “American Strippers.” 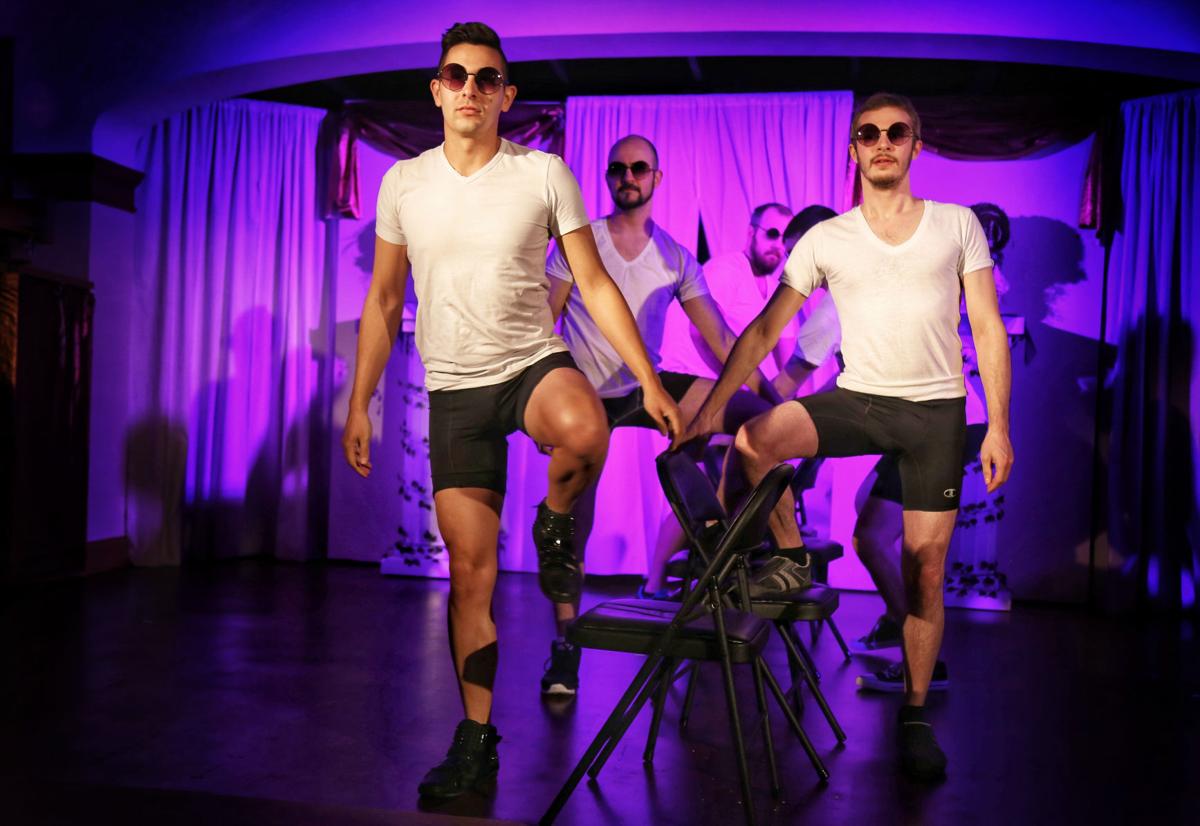 Front to back: Carlos Gutierrez, Jason Karol and Brandon Harrington share a scene.

in ACT’s production of “American Strippers.” (Photo by David Cantelli)

Sarah Quintiliani as Aphrodite and Court Stafford as Apollo in ACT’s production of “American Strippers.”

Front to back: Carlos Gutierrez, Jason Karol and Brandon Harrington share a scene.

in ACT’s production of “American Strippers.” (Photo by David Cantelli)

Ruggiero, of Pawtucket, guides a strong cast of 16 through a fantasy plot punctuated by outrageous strip shows and more, all choreographed with gusto by Gutierrez, of Attleboro. You’ll want a front row seat to catch each nuance and memorable costume choice. Everybody is “all in” in every scene.

The setting is The Americana, a strip club in Texas that is staffed by characters of American legend who are given a miraculous chance to live on as club employees and entertainers. But is everybody happy? Not so much.

Kimberlyn Roche of Attleboro plays Paula, formerly the giant lumberjack, Paul Bunyan. She’s the club’s co-owner and a force to be reckoned with, demanding loyalty and imposing strict rules of engagement. Roche is dynamic and determined as she tries to manage a staff with big egos.

Aaron Preston of Attleboro plays her sidekick, Babe, formerly Babe the Blue Ox, also of Paul Bunyan lore. At the club, Babe is the DJ with a magnificent playlist, two spinning lights, and a furry blue hat with horns. Music choices for the production are right on target, if a little loud.

Along with being the choreographer, Gutierrez plays Tommy, the former Tom Sawyer, who is now the club’s pole dancer and the accomplished leader of the male strippers’ performances. He’s mesmerizing, larger than life and brings out the best in the boys (and girls) for sure. Kudos to the six men who tore up some really nice but flimsy clothing to put on the show.

As the play opens, an unusual bride and her bachelorette party arrive on the night before the wedding. Unusual? The four women are all Greek goddesses, playing hooky from Mount Olympus for a final fling.

Sarah Quintiliano of West Warwick is the bride, Aphrodite, the goddess of love. Her opening monologue is haunting as she wistfully expresses her resignation to a loveless marriage, imposed upon her to avoid another thousand unwed years.

Vivienne Carrette of Providence is Athena, goddess of Athens, both a warrior and the patron of craft and weaving. Carrette’s fiery monologue threatens a crafty, murderous plot to have Aphrodite to herself.

She ensnares an unwitting accomplice to murder the groom and thereby sets up a hilarious dialogue in Act 2 between Courtney Stafford of Providence as Apollo, God of the Sun and the groom to be, and Jay Are Adams of Riverside, as Mr. Henry. Couldn’t be funnier.

Goddess of hunting, Artemis (Kimberly Paine of North Attleboro), and goddess of fertility and the harvest, Demeter (Caitlyn Lively of Attleboro), round out the party. Each brings her own agenda to the mix, with predictable problems and snafus.

Each character has a moment to shine with a monologue that outlines their place in myth or legend. Yes, some drag on, are too “talky” or just plain lame. Some actors talk too fast or simply fail to project. Others deliver interesting and memorable insight, though. Pay attention.

Outstanding monologues include striking truth-telling from Bob Lively of Attleboro as Casey from “Casey at the Bat” fame and the man vs. machine message of steel-driver John Henry by Jay Are Adams.

Club co-owner, the Greek god Dionysus, states that we are fascinated by our own limitations, yet we long to be set free. He’s played by Matthew Moos of Bourne as larger than life and irrepressibly jolly.

Hera, queen of the gods and champion of marriage and family, arrives at the end of Act 1 with a really deafening clap of thunder. The audience is reminded to “buckle your seat belts.” Elizabeth Parent of Albion is a knockout in a glittering gold dress.

In Act 2 she rants that we suffer from “the adversity of non-believers.” Her dance number with the strippers is not to be missed, set to “Take Me to Church” by Hozier. Riveting.

The play is a collection of monologues, scenes, and lively dance numbers that carry the offbeat but intriguing story from start to a satisfying finish. The script includes strong language and adult sexual situations.

“American Strippers” runs through March 4 at the Bates Masonic Lodge, 71 North Main St., Attleboro. Shows are at 8 p.m. Fridays and Saturdays and 2 p.m. Sundays. Tickets are $18 in advance and $15 for seniors/students at squareup.com/market/acttickets; at the door they’re $20 general and $15 for seniors/students. For reservations, call 508-226-8100 or email AttleboroCommunityTheatreACT@gmail.com.