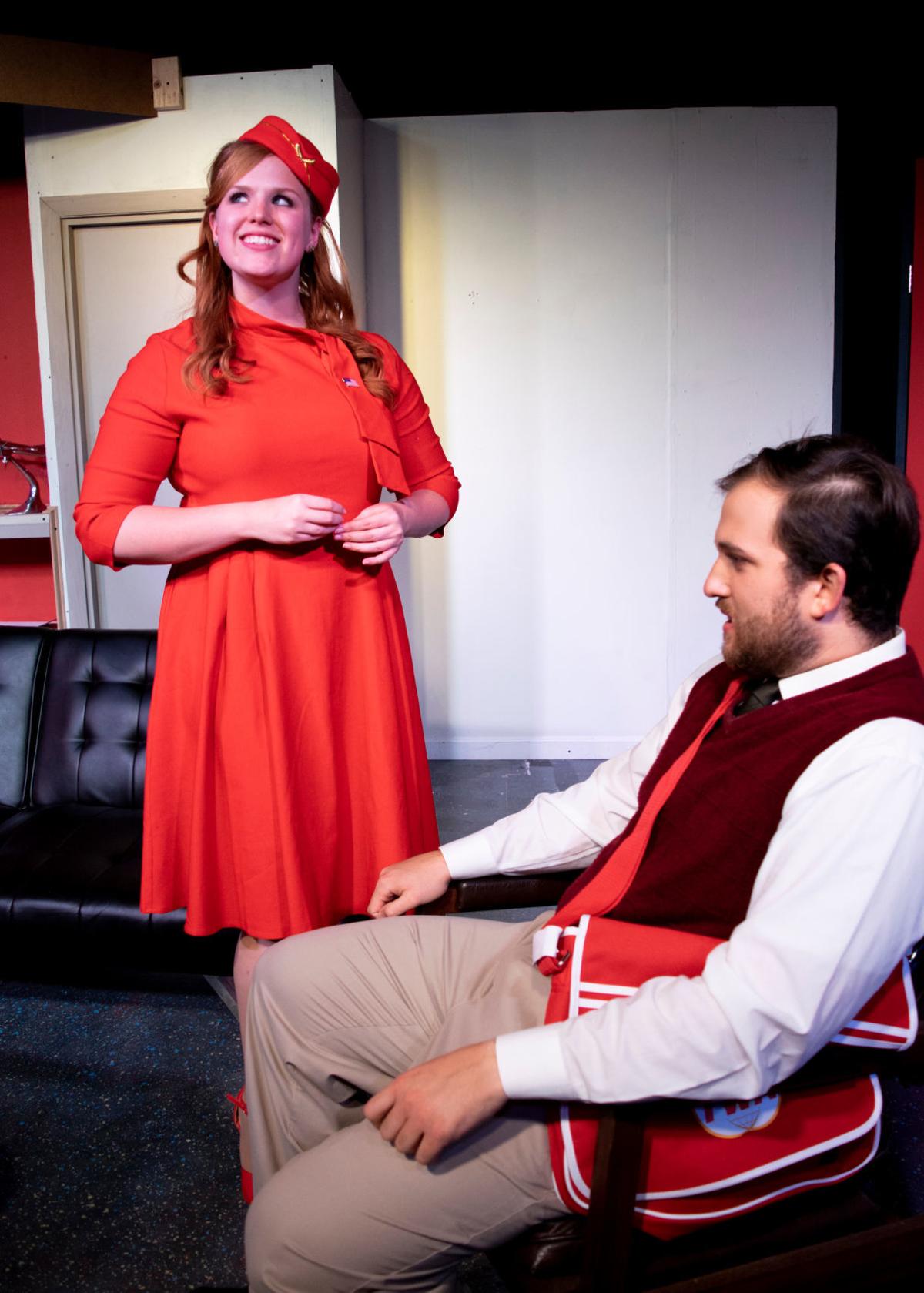 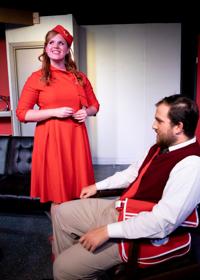 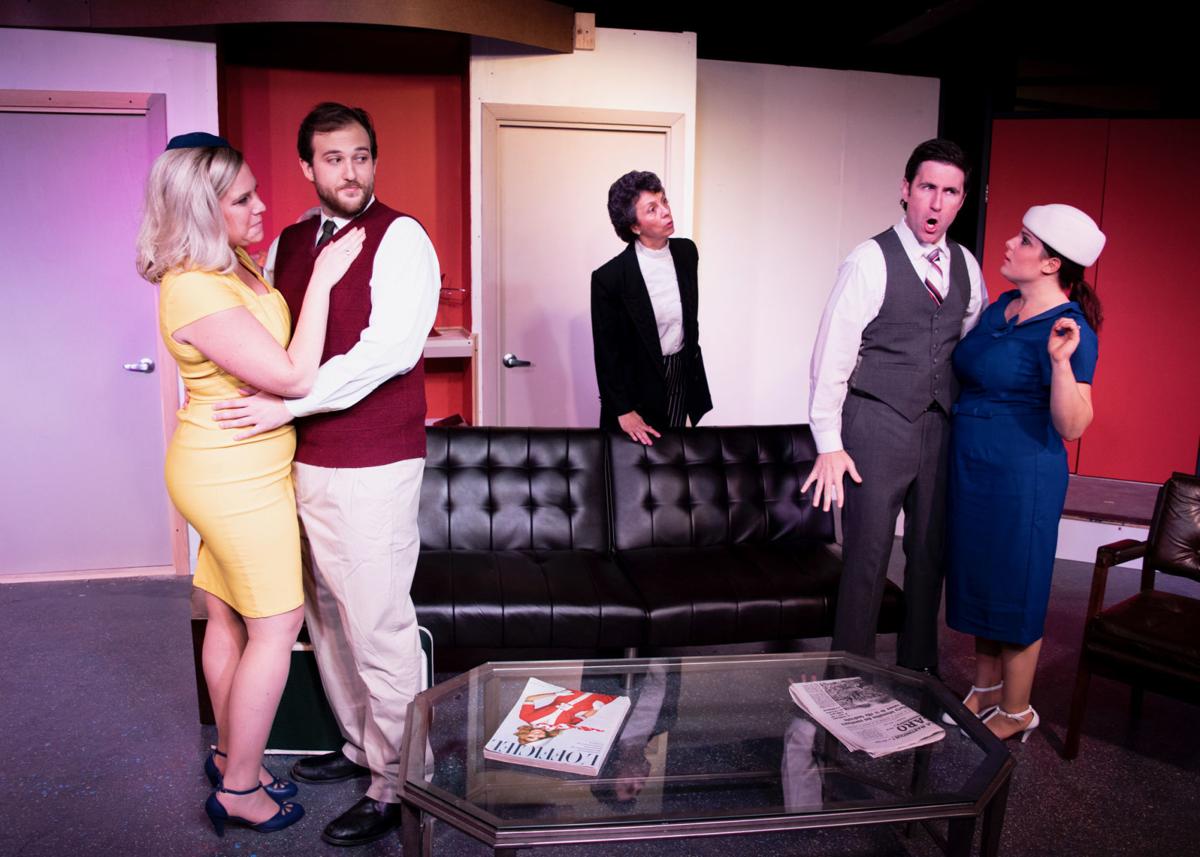 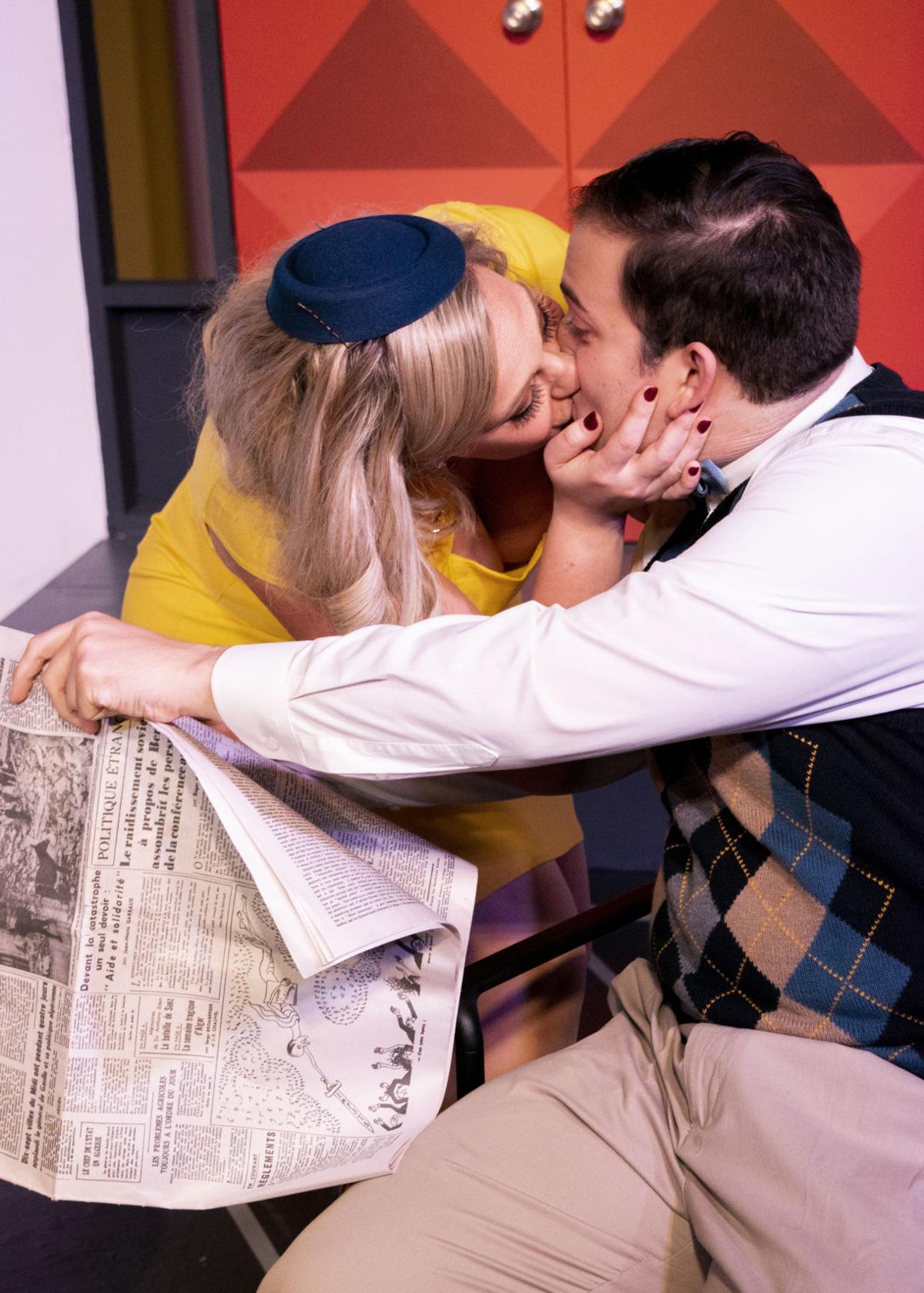 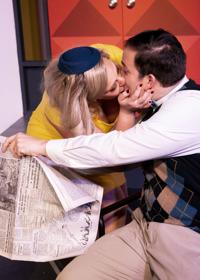 Allison Porter and Joseph Tinianow in the MMAS production of “Boeing Boeing.” (Photo by Laura Gustafson)

Allison Porter and Joseph Tinianow in the MMAS production of “Boeing Boeing.” (Photo by Laura Gustafson)

The setting is an apartment living room in 1960s Paris, decorated in graphic shapes and shades of orange, black, and beige. The apartment is strategically located near Orly international airport. The five doors and a hallway guarantee near-misses and a high level of mayhem on the set.

Laura Steele makes her MMAS debut as the wryly exasperated maid, Berthe. Her attitude of entitlement, spot-on comic timing, and strategic facial expressions carry her through the ensuing chaos with ease. In dialog after dialog, she outfoxes her employer and his guests with finesse.

Her boss is bachelor Bernard, played with panache by Joe Rich. He’s smugly superior as he juggles the days and nights with his three fiancées, all airline stewardesses on opposite schedules who have their own keys to the apartment. Rich is calm and confident at first but becomes a hilariously tormented man in Act 2, on the verge of a nervous breakdown.

The entire plot is glued together by Robert, Bernard’s friend from college, who arrives just in time to see the unraveling of the tightly scheduled fiancées. Played by Joseph Tinianow, Robert jumps right into the fray as he meets one fiancée after another.

Talk about tearing up the stage! Tinianow is a master of inventive innuendo as he dashes around the set, doing his best to prevent disaster. He just takes that script and plays it for all it’s worth in scene after scene. Kudos for an outstanding performance and the finishing touches of director Michael McGarty.

But fasten your seat belts and get ready to be swept away by the three dynamite fiancées. As Berthe warns, “This is going to be a bumpy flight!”

First, we meet red-head Gloria who flies with TWA in a bright red uniform. Catherine Haverkampf plays Gloria as a sweet Southern girl at first. But that velvet glove hides an iron fist when she lays down the law in Act 2. Totally believable in her assertive performance, Haverkampf holds her own in the ensuing events.

Next, we meet brunette Gabriella who flies with Al Italia in a blue uniform. Ashley Harmon is outspoken and loud, with a well-rehearsed Italian accent. She’s sassy and opinionated, always wanting to have the last word.

Lastly, there’s blonde Gretchen, who flies with Lufthansa in a bright yellow uniform and a dramatic black cape. Allison Porter is fierce, confrontational, suspicious, and over-the-top passionate in every scene. She’s trouble with a capital T and persuasive to a fault. It’s a skillful performance.

The ending? It’s not impossible and oddly satisfying.

“Boeing Boeing” ran for seven years and 2,000 performances in London in the ‘60s. The1965 Paramount film starred Jerry Lewis as Robert, Tony Curtis as Bernard, and Thelma Ritter as Berthe.

You are trying to book ve may bay but unknown to order airline tickets online Where? Go to the right Etrip4u to dat ve may bays online is fully automated, fast, simple and saves time. Etrip4u confident will bring satisfaction and contribute a small part to the success of our customers.