You have permission to edit this article.
Edit
News
Sports
Opinion
Obituaries
Classifieds
Subscribe
Share This
1 of 5 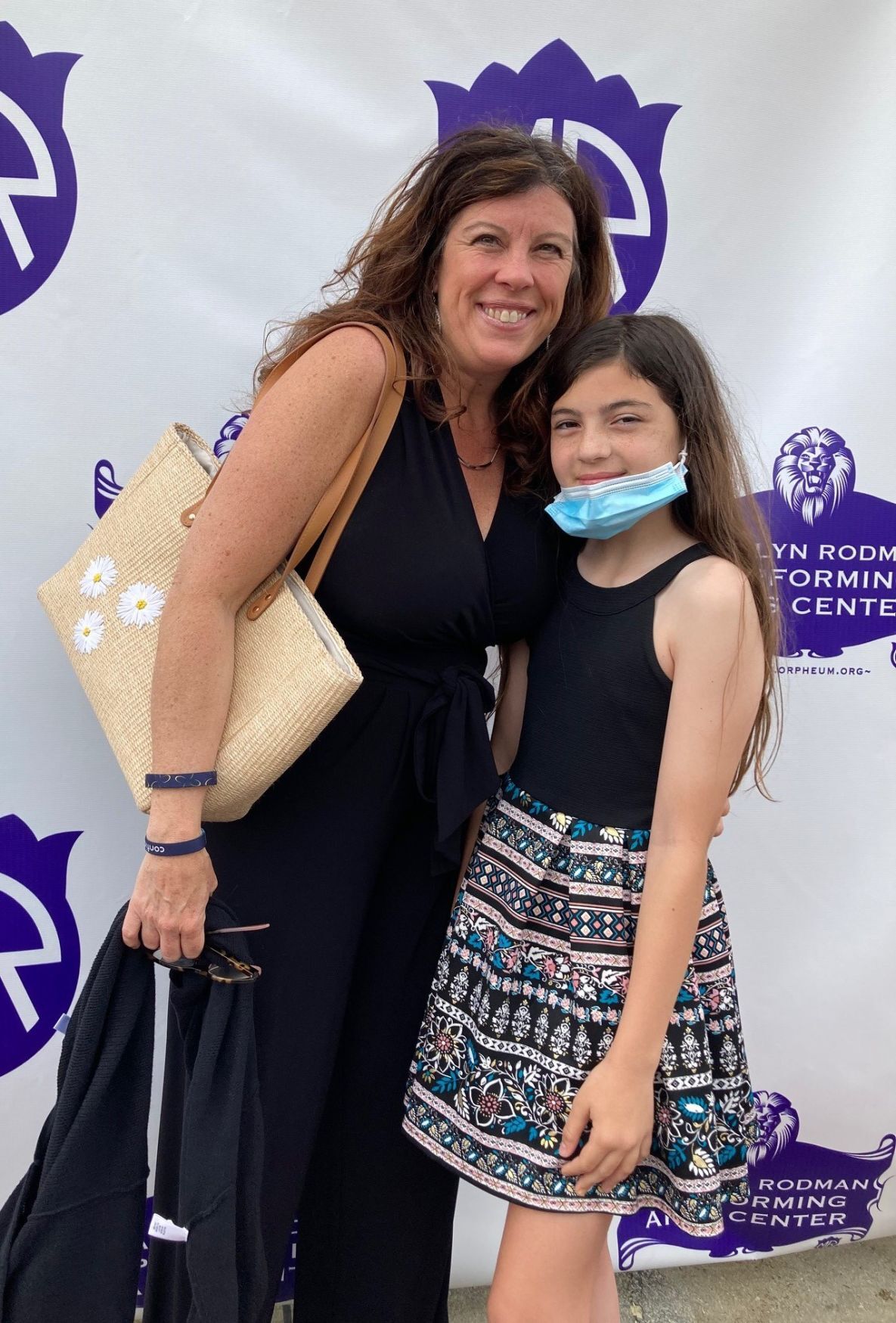 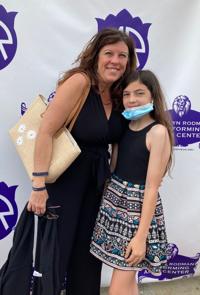 Rachel Calabrese, left, who received the Marilyn Rodman Legacy Award, on the red carpet at the June 3 event with her daughter Lucy. 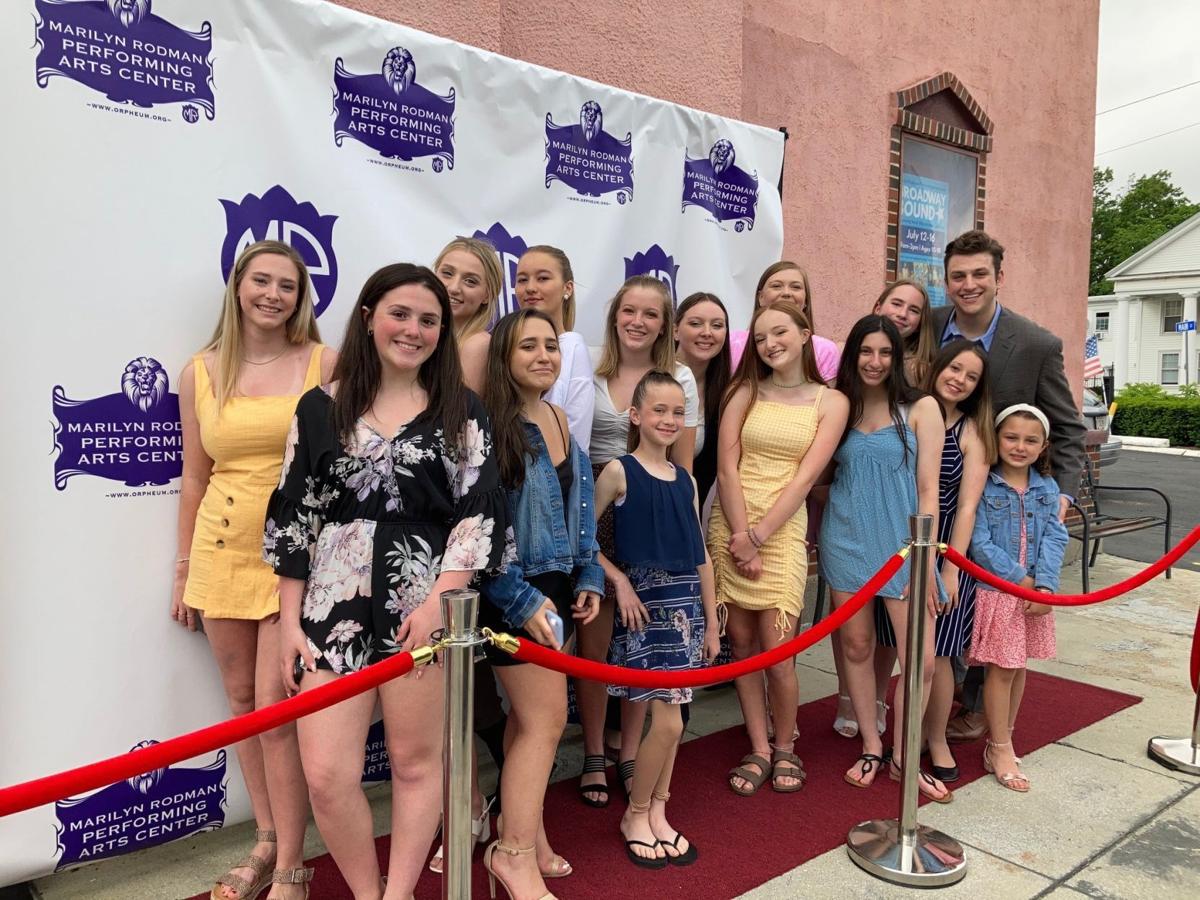 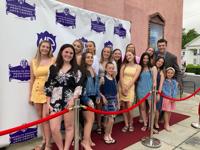 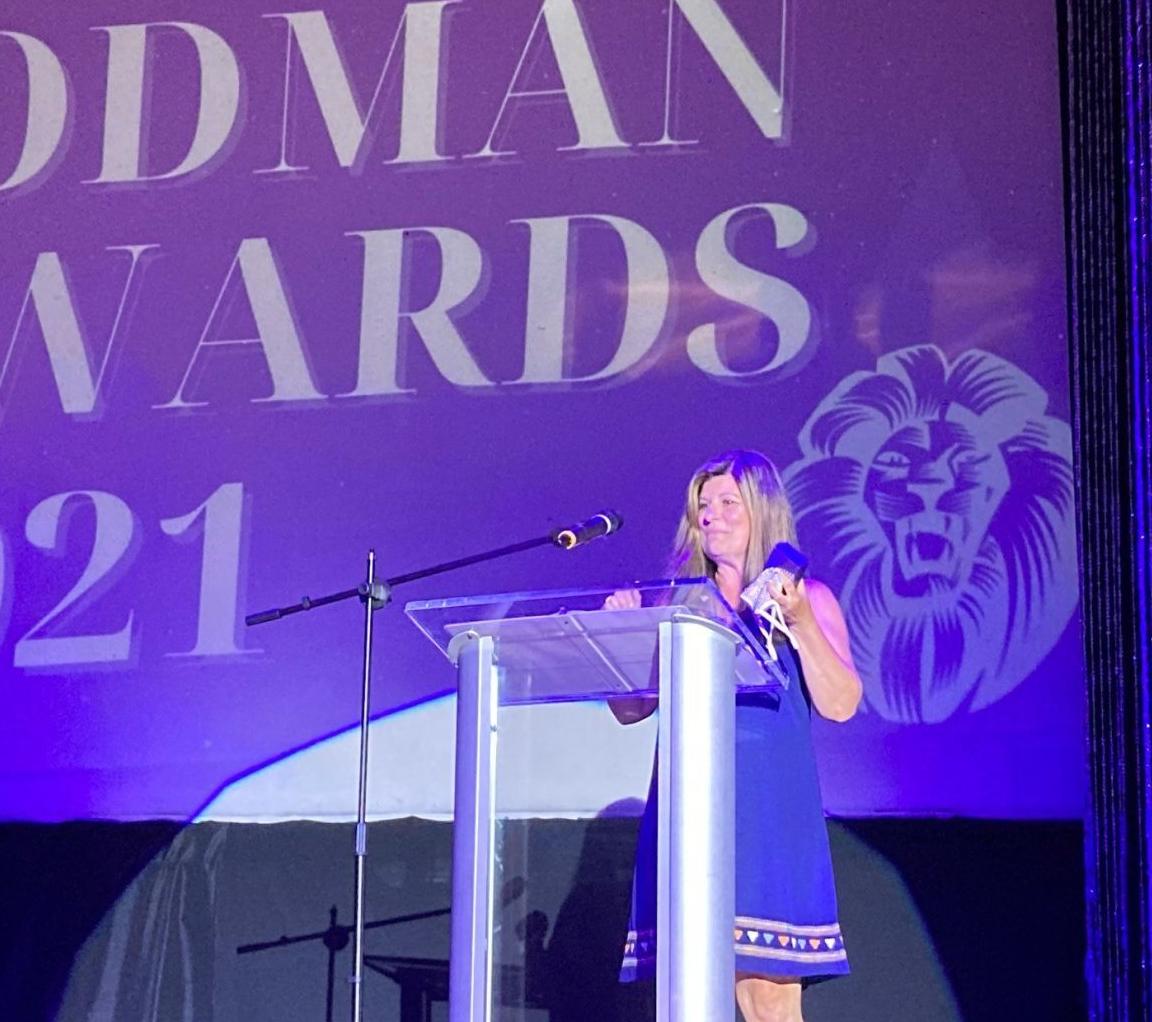 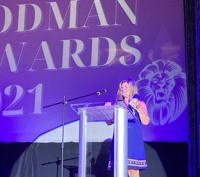 Tina Belanger gives an acceptance speech for her Producers Award for an innovative civic leader, during the June 3 ceremony at MRPAC. 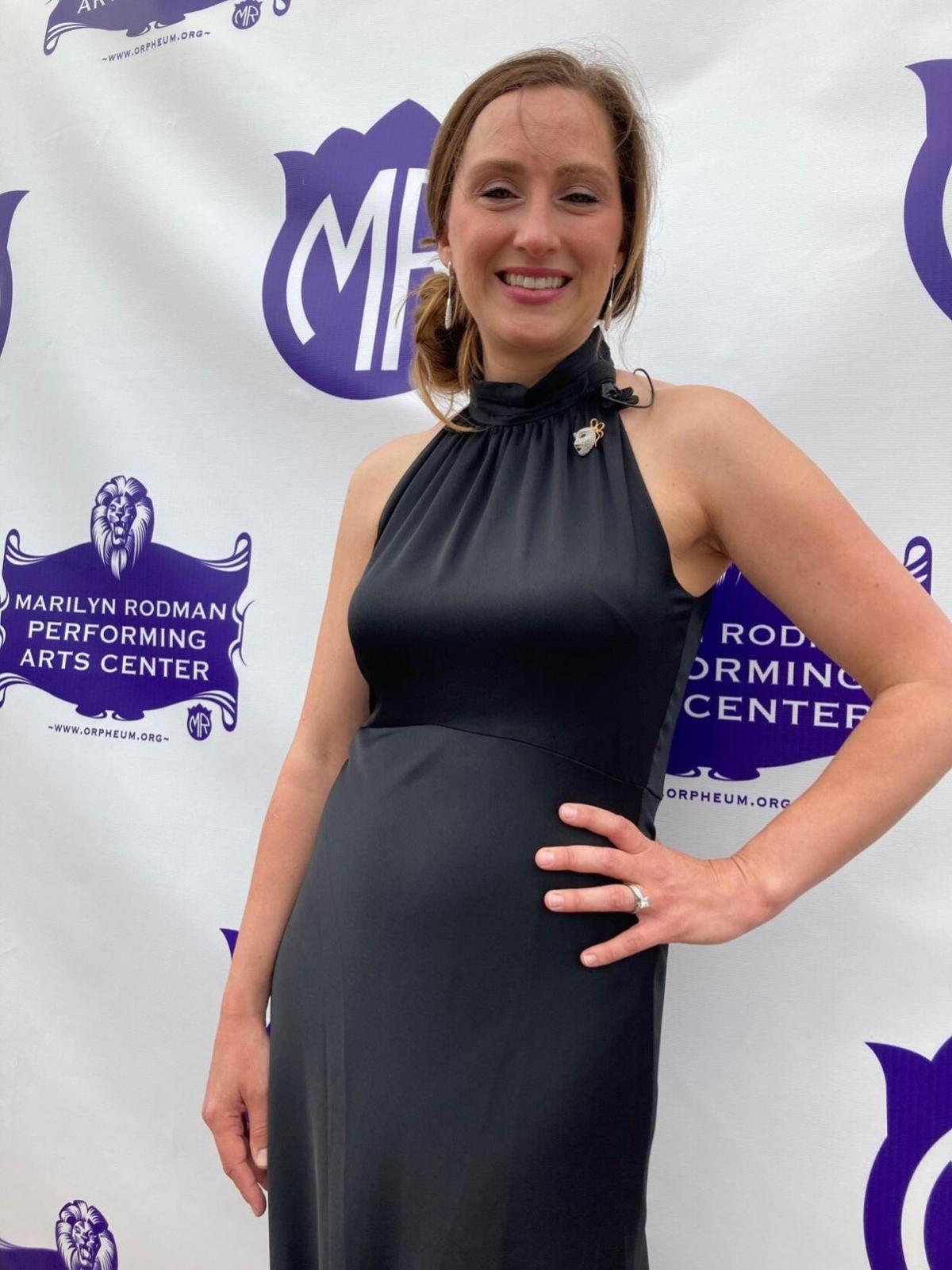 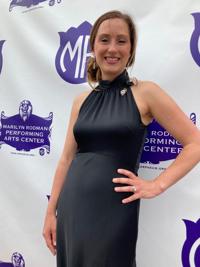 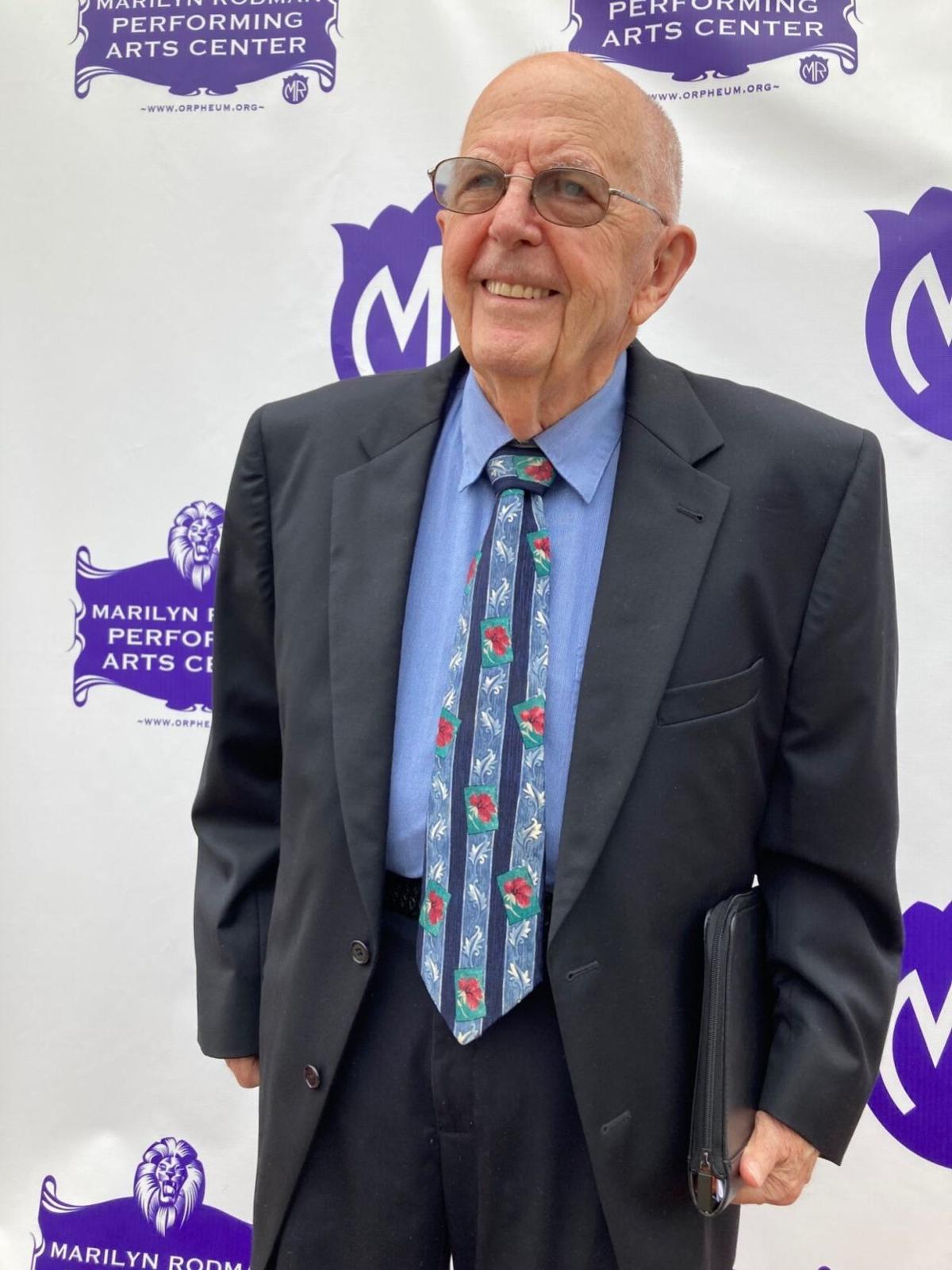 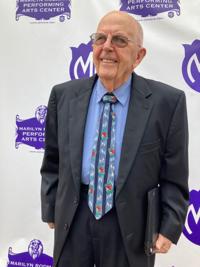 Jack Authelet poses with a copy of his new book “Foxborough World War II, expanded second edition,” prior to his award at the MRPAC.

Rachel Calabrese, left, who received the Marilyn Rodman Legacy Award, on the red carpet at the June 3 event with her daughter Lucy.

Tina Belanger gives an acceptance speech for her Producers Award for an innovative civic leader, during the June 3 ceremony at MRPAC.

Jack Authelet poses with a copy of his new book “Foxborough World War II, expanded second edition,” prior to his award at the MRPAC.

After more than a year of shutdown of the arts scene due to the pandemic, performers and supporters were welcomed back to the stage, via red carpet, at the local performing arts center.

The Marilyn Rodman Performing Arts Center hosted the Rodman Awards which welcomed more than 40 nominees, presenters, and their families and friends on June 3, to both honor local individuals and community leaders who have made a significant difference in the past year.

The event, which was also live-streamed, was also viewed by organizers as a way for the public to invest in a local landmark as it reemerges post-pandemic as a vibrant performing arts organization under new leadership and with renewed purpose.

A red carpet was set along with a MRPAC banner to allow attendees photo opportunities before entering the awards ceremony.

Catherine Miller, who took over as executive director of the venue on Jan. 1, said it was a very special event, not only celebrating the community and the waning of the virus, but also the reopening of the theater.

“I have a lot of emotions and excitement is one of them, along with joy, relief, pride, comfort, solidarity, trust... this is a time for us to start the beginning stages of all being together again,” said Miller, who has worked in nonprofit arts for over 15 years, most recently as chief advancement officer at Community Music Center of Boston. “The arts have always brought people together. Even while we faced uncertainty during the pandemic, we found ways to experience art.”

According to Miller, the theater recently received a $90,000 facilities grant from the Massachusetts Cultural Council to replace the theater’s roof and HVAC systems. A requirement of this grant is a one-to-one match of funds. The awards ceremony is the first event to help raise these matching funds over the next year. The event helped to raise $15,000 for capital improvements.

Miller said the past year-and-a-half has been extremely challenging for everyone and impacted everyone in very different ways and on many different levels, and to be a true community resource, she said, there is a need to to support all of those in the community including businesses, individuals, youths, teachers and people in public service.

“Community is about bringing people together and that’s what we did with the Rodman Awards. I can’t help but feel immense gratitude and pride to be working alongside our incredible board of directors who have worked tirelessly during the pandemic to ensure the theater would be able to survive the closure,” Miller said.

In addition to all the award winners, The Rodman Foundation presented the Marilyn Rodman Legacy Award to Foxboro resident Rachel Calabrese. The award honors someone who embodies the characteristics of the theater’s namesake, Marilyn Rodman, which includes a strong community spirit, a passion for the arts, a strong personal and professional focus on equity and access for all, is a creative problem solver and has a forward-thinking vision both in her work on behalf of the theater and as executive director of the non-profit ConfiKids.

Calabrese, who is one of the venue’s board members, said she was very honored to receive the award.

“I was blown away at first. I feel like other people deserve it more. But I appreciated it. We’ve all been working so hard for the theater and it was just very nice,” Calabrese said.

She said it was difficult to put into words how much the event meant for the theater.

“We asked Don (Rodman) to allow us to put Marilyn’s name on the theater back when we opened the theater up in 2017. She was a visionary in developing youth exposure to the theater with her Theatre for Kids program. We’ve been shut down for 14 months and it’s just beautiful that we survived and are now thriving thanks to the Rodman Foundation’s help and the community,” Calabrese said. “We are proud to honor her in this way with the Rodman Awards. There are so many people from the community who are being acknowledged.”

Jared Craig, one of the theater’s board members who was an award presenter, said he was very excited about the opening event for the theater.

“I think it’s great that we’re finally able to open doors again. We’re ready to accept people back in the theater. I think it’s great to recognize the community because there are so many important, influential people that make Foxboro what it is today,” Craig said.

Greg Kanelos, the owner and artistic director of Studio G dance company, said they have been working out of the center since January and made their debut performance at the ceremony.

Kanelos said they were very excited to be there since they have worked hard all year.

Here are the Rodman Awards recipients:

Marilyn Rodman Legacy Award: Rachel Calabrese; Billy Elliott Award (for creating youth opportunity); Doug Suess, Hamilton Award (for someone who builds bridges from history to the present); Jack Authelet and Emelie Bonin, Footloose Award (for a community leader who has made a heroic impact on local life in the past year); Anne Marie Anderson, You Can’t Stop The Beat Award (for a senior citizen leader or one who works closely with seniors); Marc Craig, Producers Award (for an innovative civic leader); Tina Belanger and Michael Webber, Best Supporting Role (for a person who is always there to lend a helping hand, goes the extra mile, makes a difference and expects nothing in return); Reggie St. Germaine and A.J Dooley, The Sequel Award (for the one who never stops giving back, to their industry, their school, their community, and their friends); Kristen Walsh and Nicole Vashon Hanlon, School Of Rock Award (for an outstanding Arts/Music Teacher 2020/2021); Aaron Bush and Cami Tedoldi, You’re Never Fully Dressed Without a Smile Award (for a community cheerleader); Lindsay Deneault, Dreamed A Dream Award (for the one who created something big and bold for their community during the pandemic); KP Senior Spirit 2021, Matilda Award (for a youth leader who energizes others by giving back), Makayla Hickey.