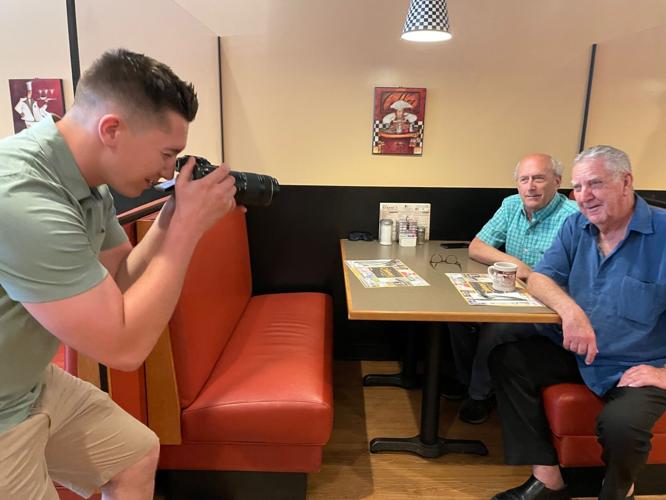 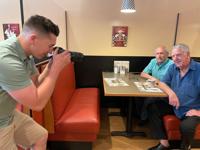 Balazs Busznyak gets a photo of Paul Kandarian and former detective Pat Boyle, who Kandarian portrays in the film. 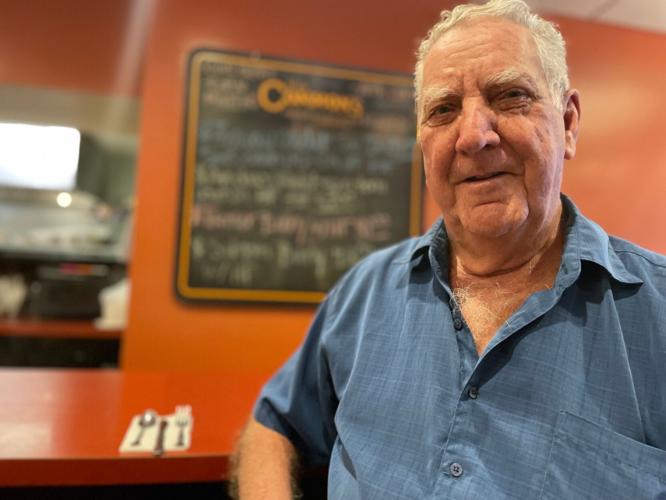 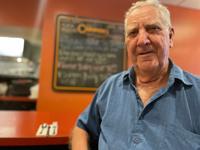 Former detective Pat Boyle joined the cast and crew for filming in Foxboro. 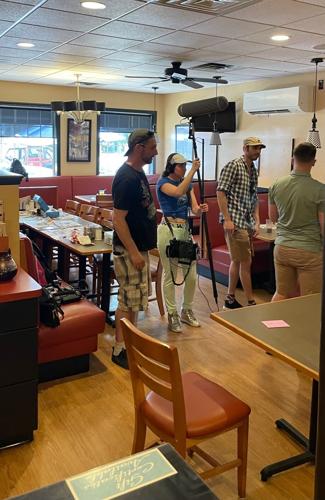 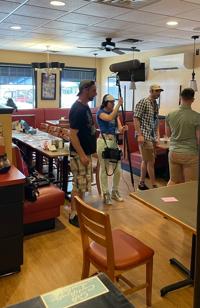 Balazs Busznyak gets a photo of Paul Kandarian and former detective Pat Boyle, who Kandarian portrays in the film.

Former detective Pat Boyle joined the cast and crew for filming in Foxboro.

After the doors closed for the day last Sunday afternoon, a diner in Foxboro turned into a movie set.

Spyros Kalogeras, the owner of The Commons Neighborhood Eatery and who pitched in on the production by playing an extra as a customer, said the set looked great and he hopes for success and to see the restaurant scenes make the final cut on TV or in a movie theater.

A total of six days of shooting for “The Trunk” — a pilot inspired by a true crime case that took place decades ago in New Hampshire — with around 43 crew, cast and extras took place in Strafford and Somersworth, N.H., for five days, and on the last day was shot in the heart of Foxboro with the voice-over portion recorded at the Foxboro Cable Access recording booth.

Henry Columbare, who hails from Chichester, N.H., and is the writer, director and executive producer for the film, said the pilot for the first episode is inspired by events that take place during the first two days of a detective’s investigation regarding a mysterious trunk that was left with a couple by a woman back in 1983 in New Hampshire. What the couple finds when they open the trunk cracks open a wild story that goes back almost 75 years.

“It started as an urban legend that one of our producers, Ethan Rodgers, had heard growing up in the area where the story is based. After we did some digging, we realized that not only was the legend true, but that the original detective, Pat Boyle, who worked the case, is still alive. So, we met him, interviewed him, and spent nearly three years bringing this story to life,” Columbare said.

“It’s been a wild experience, but everyone involved has been amazing,” Columbare said.

The pilot is being made with the hope that it will be picked up for a movie or television series.

Columbare said the shoot in Foxboro was fantastic.

“We had a great group of people there — from Spyros and Chris, the owners who were nice enough to let us film at The Commons Neighborhood Eatery, to all our extras, crew, and especially lead actor in the scene, Paul Kandarian,” Columbare said.

The director of photography for the project is a Foxboro resident, Balazs Busznyak.

Busznyak, as the DP/Editor of “The Trunk,” said, “It’s such an impactful story and to bring it home to Foxboro where I grew up and have the opportunity to film in our hometown is something special.”

“I am very excited to put this together and be a part of the story and hopefully it gets the recognition that it deserves because there are a lot of talented people involved in this project and the story speaks for itself,” Busznyak said.

His mother, Foxboro resident Zsannett Peimli, got to be on the set not only to witness her son’s “action” but as a waitress for a key scene.

Ethan Rodgers, one of the producers of the film, said the eatery’s location was incredible.

“Spyros is an amazing owner, very helpful, and did a great job welcoming us into his environment and I thought everything worked out perfectly,” Rodgers said.

Kandarian, who portrays an older version of the character Pete Boylan inspired by the detective said, “I love doing the show because it is a great story and I love the guy, Pat. He is one of the finest humans I’ve ever met and he’s got a lot of stories to tell and this production is helping him to tell it. And if I can be the conduit for that, all the better.”

The younger version of the character is played by Michael Zuccola.

In the Foxboro scene, set in the present day, the older version of the detective played by Kandarian sits in a restaurant booth, telling the story of the trunk found in 1983.

Former detective Patrick Boyle, now 77, who came to the set in Foxboro, ended up being an extra as a customer.

“The scene looked great. This is the last day of shooting. I’m just so glad that everybody’s supporting me and helping me with my story,” Boyle said.

Day five of the production took place at Boyle’s house in Somersworth, N.H., on May 1.

Boyle, his eyes tearing up, said he has been waiting for this story to be told for 40 years.

When the series of events happened, he said brick walls got put in front of him.

Boyle said he just knew it in his soul, someday, somehow, someone was going to help him with this because he could not do it all by himself.

“I was 38 when this happened and I just knew before I die that the story was going to be told,” Boyle said, adding “words can’t express how I feel. My soul is relieved. I can die at peace because I know I’ve done well for those children who didn’t get to tell their story but this production has given them a voice.”

Columbare wants to keep the secret of what was actually inside of the trunk, which will be revealed during the episode they just wrapped filming.

“’The Trunk’ is not only a crazy story that stretches back to the late ‘40s, and delves into things like murder, betrayal, crime, and cover-ups, but so many of the topics that occurred in this story are still, and rather unfortunately, culturally-relevant today,” Columbare said.

The writer director feels the ratio of the bad guys and good guys has flipped since time has passed and now the younger generation can tell the story.

Some local students got to participate in the production as well, such as Sean Thornton (Ahern Middle School), Adam Taj (Foxboro Regional Charter School), Alexa Correia, and Teddy Jouret from Foxboro High School.

Jouret who is also working on the animation for the production, said, “I thought it was very interesting to see a production in action, and it was super cool to actually see the officer involved in the case.”

Boyle, the former detective said: “I just want the ‘truth.’”

He hopes this film will bring some crucial lead to discover what actually happened to the victims many decades ago.