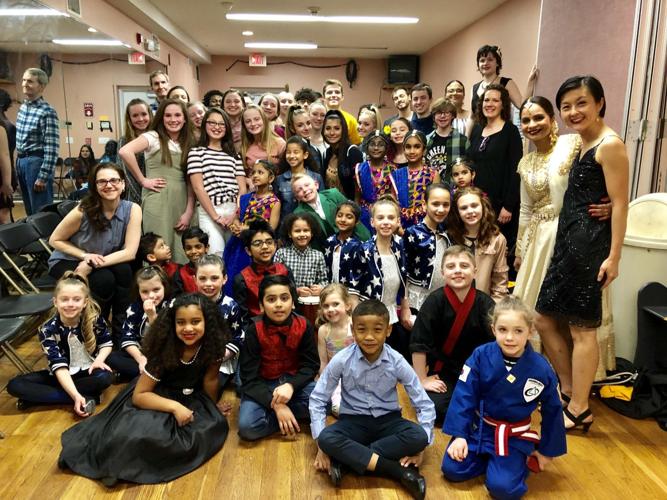 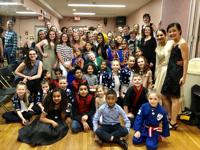 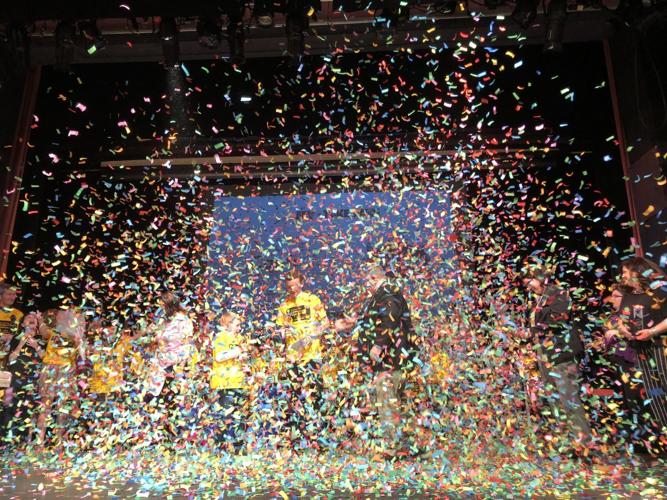 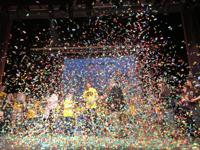 Confetti fills the stage during the Family Variety Show at the Marilyn Rodman Performing Arts Center.

Confetti fills the stage during the Family Variety Show at the Marilyn Rodman Performing Arts Center.

The show raised money for ConfiKids and the performing arts center.

“This year the talent got even better,” said Rachel Calabrese, executive director and founder of ConfiKids. “Last year was our first year and we didn’t know what to expect. We had a lot of acts come back for the second year and a great deal of new talent as well.”

Teddy Jounet, 15, a freshman at Foxboro High, presented his original animation for the second year at the show.

“Animation has been a hobby of mine for a few years and I always jump at the opportunity for it to be presented somewhere,” he said. “Last year there was a smaller group of people and a different finale, but this year there were more acts and more variety, in my opinion.”

Taylor Ford, 72, a folk singer who has lived in Foxboro for 30 years, sang “Chilly Winds.”

“I just wanted to help out for good cause and Rachel. I think it’s really good, especially for young talents, to perform in front of people,” said Ford.

Brin Cox, a three-year Foxboro resident, had her two daughters, Nara, 6, and Ceana, 4, perform for the first time in the show. Nara did a karate routine and Ceana did a rap song.

“It makes me so pleased to see my girls’ desire for the performing arts and their confidence to show the town,” Cox said.

“I decided to participate because I had a good time last year and my papa (grandfather) thought I could do it very well,” said Griffin.

“This is a great experience,” he said, holding his winning trophy and covered by colorful confetti. “None of this would be possible without ConfiKids and everything they stand for. It’s a really great program and what they do is amazing and their purpose is something that’s changing the world.”

Betsy Buckland, an assistant in the Boyden Library children’s department, said she was happy to see so many of our young library patrons performing.

“I thought the FFV was just wonderful and lots of fun,” she said. “I missed it last year, but I’m so glad that I went this year.”

“When we acquired the theater last year, our goal was to provide a regional draw with a Foxboro focus and that is exactly what we got with this event,” said Selectman James DeVellis, who was one of the emcees this year again along with Jim Slattery.

“It seems everyone enjoyed it and we have been so incredibly lucky to have Schneider Electric sponsor the whole program the past two years and be able to raise funds for the Marilyn Rodman Performing Arts Center and ConfiKids,” Calabrese said.

“Everyone was so great and it was a really hard decision,” Manos said. “I wish we could have picked even more than three winners. Foxboro has great talent in its midst.”