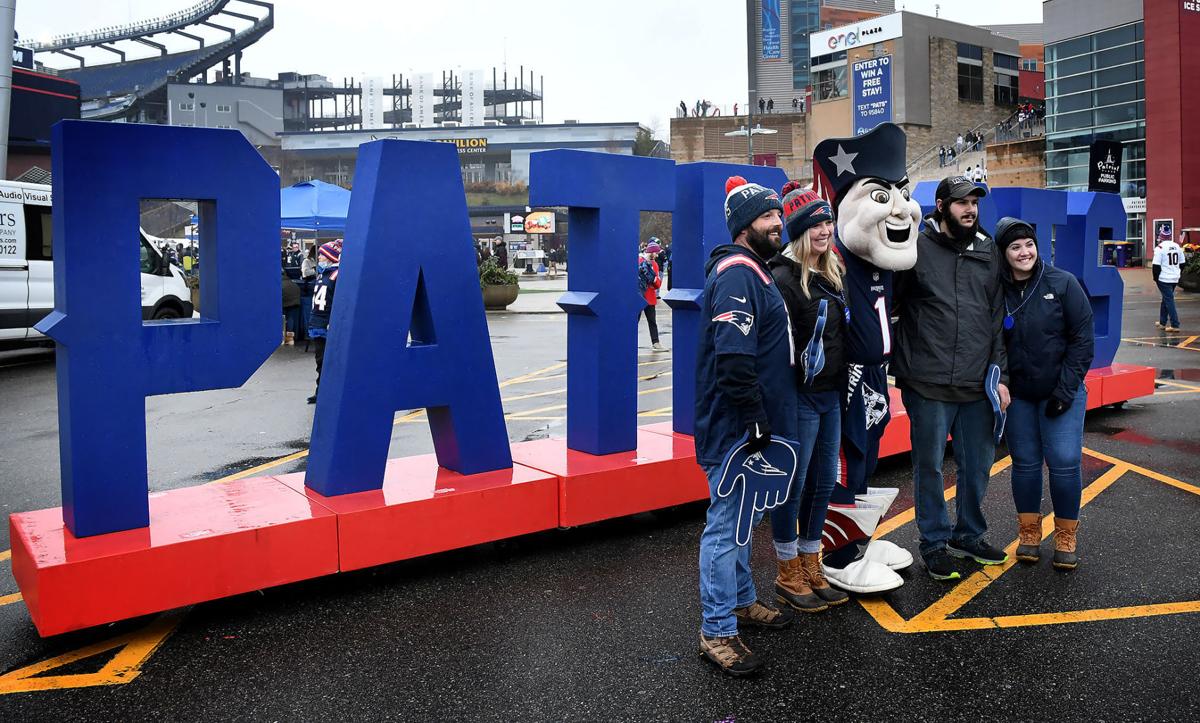 Fans pose with Patriots mascot Pat Patriot in the Fan Zone outside of Gillette Stadium on Sunday. 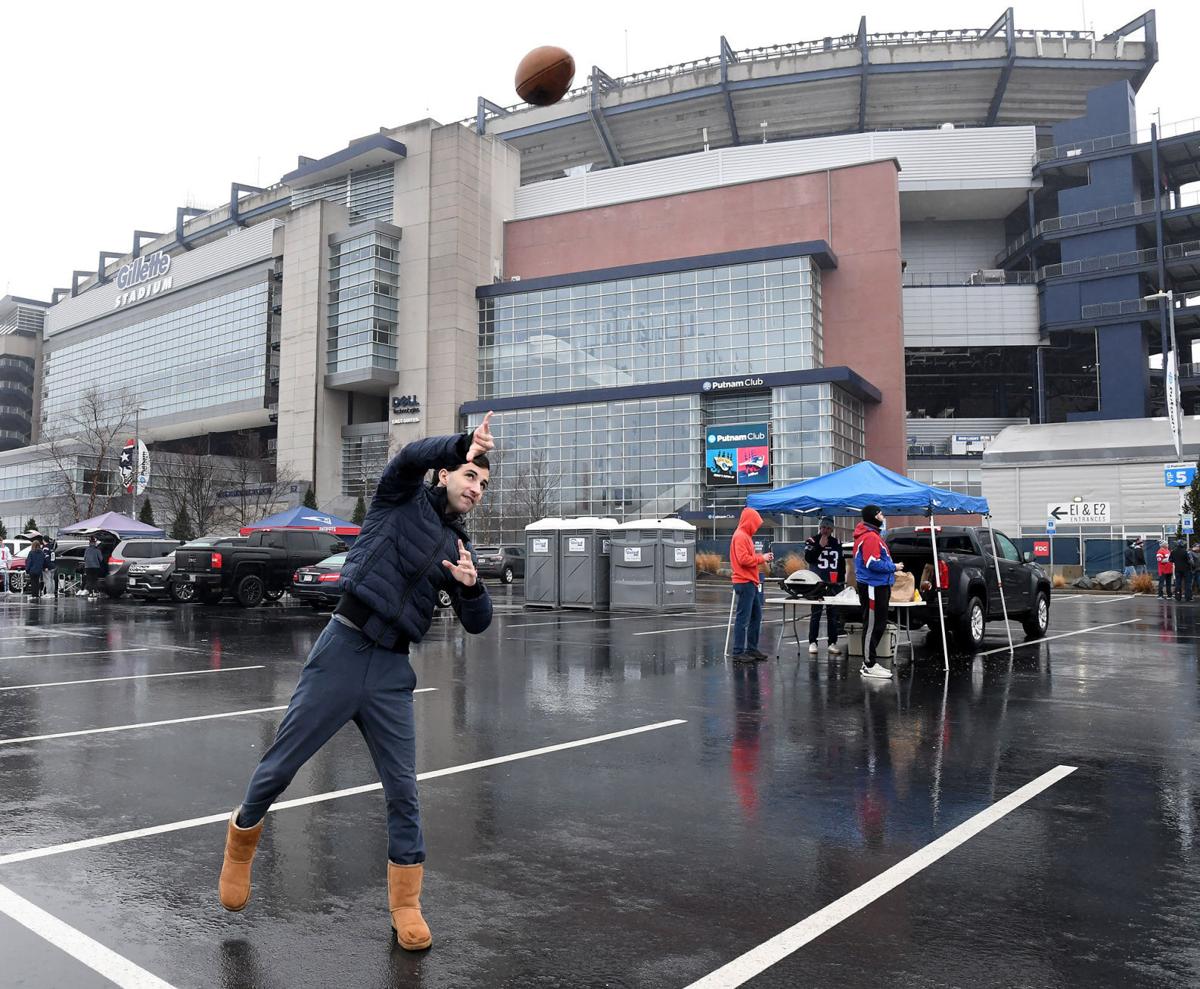 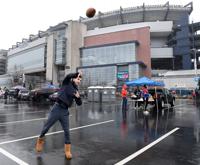 Matt Boghossian of Providence plays catch in the wet parking lot in front of Gillette Stadium prior to Sunday’s game against the Jacksonville Jaguars.

Fans pose with Patriots mascot Pat Patriot in the Fan Zone outside of Gillette Stadium on Sunday.

Matt Boghossian of Providence plays catch in the wet parking lot in front of Gillette Stadium prior to Sunday’s game against the Jacksonville Jaguars.

As the 2021 NFL regular season winds down, New England Patriots fans at last Sunday’s game against the Jacksonville Jaguars said they are grateful that they were able to return to games at Gillette Stadium this year.

“You can’t beat an in-person Patriots experience,” said Foxboro resident Jack McGahan, 19, a sophomore at Fairfield University who was tailgating in a lot adjacent to the stadium before Sunday’s 1 p.m. kickoff. “Things like watching Jules [former Patriots wide receiver Julian Edelman] run up and down the field … I miss that guy.”

His twin brother, Joe, a sophomore at Rhodes College in Memphis, Tenn., said the “connection” with other fans is among the factors that make the experience so powerful.

“The roar of the crowd, the Minuteman gunshots, the foghorn on the third down … it’s impossible to experience that in your living room,” he said. “You have to be at the game in person, surrounded by other Patriots’ fans.”

Their friend, Michael Barrett, 20, also from Foxboro and a sophomore at Providence College, said that since he has received his COVID vaccines and a booster, he is not concerned being among tens of thousands of other people gathered in the stadium.

“Most people have been vaccinated and I feel confident that I will be safe,” said Barrett, who successfully predicted a decided Patriots victory. The Patriots trounced the Jaguars 50 to 10 which, combined with a Miami Dolphins loss on Sunday, clinched a playoff spot for the hometown team.

“I’m vaccinated and boosted, too, so I feel like it will most likely defend me against COVID,” added Joe McGahan. “And we’re outdoors, which makes a huge difference.”

Former Foxboro resident Jillian Lucas, 21, a senior at Providence College who lives in Providence, said she “isn’t too concerned” about COVID and the latest omicron variant — “especially since it’s an [open air] stadium” — but plans to get tested after the game “just to be sure.”

Lucas, a season ticket holder, said she has been going to Patriots games with her father and brother since she was very young, and “definitely” missed the family bonding and live-game experience when fans were not allowed in the stands last year due to COVID-19 protocols.

“It’s something I’ve always cherished, so being back at games together this year is like being back to normal,” she said. “My family was super sad not being able to go to games last year.”

The Patriots — and other NFL teams — have had to make adjustments due to the pandemic and the latest omicron variant, which has affected hundreds of players, coaches, and other team personnel.

In an effort to keep more players on the field, the NFL and the NFL Players Association, in keeping with the Centers for Disease Control guidelines, revised their COVID-19 protocols, allowing players and coaches to return to their respective teams in five days after testing positive rather than 10 — provided they have no fever or other symptoms and are cleared by their team physician.

“I’m not sure if that’s the best move,” said Justin Cranston, 41, a software sales representative from Belchertown. “I mean, as a fan, I’m stoked, since there are more players playing, but is it best for them? Health-wise, I’m not so sure. Financially? Yes, of course.”

During a Zoom press conference last Friday, head coach Bill Belichick said that that he and his team have not escaped COVID-related challenges.

“Every team in the league is dealing with the same thing, so it’s not anything unique to us,” he said. “With this situation, it’s really kind of day-to-day, hour-to-hour. It could change very quickly.”

“The rules have changed multiple times during the year, whether it’s the returning-to-play rules or the meeting, how we handle the building, what we’re allowed to do and not do in the weight room, the training room, the dining room, so forth and so on,” Belichick added. “Those are just procedural things, but they still affect your day-to-day operation, schedule, and so forth. We’ve made the adjustments that we’ve had to make, but there’s just more uncertainty and it comes up on you quicker. You have a little less opportunity to plan long term. You just have to really be ready to adjust. I’d say it’s really kept everybody on their toes — both coaches and players — for what we might have to do.”

Season ticket holder and Ashland resident Scott Gayman, 56, said he thinks everybody is getting used to living with COVID-19 protocols.

“We’re getting to the point where everyone’s more comfortable with it and just tired of it,” said the wine sales representative. “We’ll probably all get it at some point. We’re going to have to learn to live with it, because it’s not going away. You get to a point where you have to get on with life.”