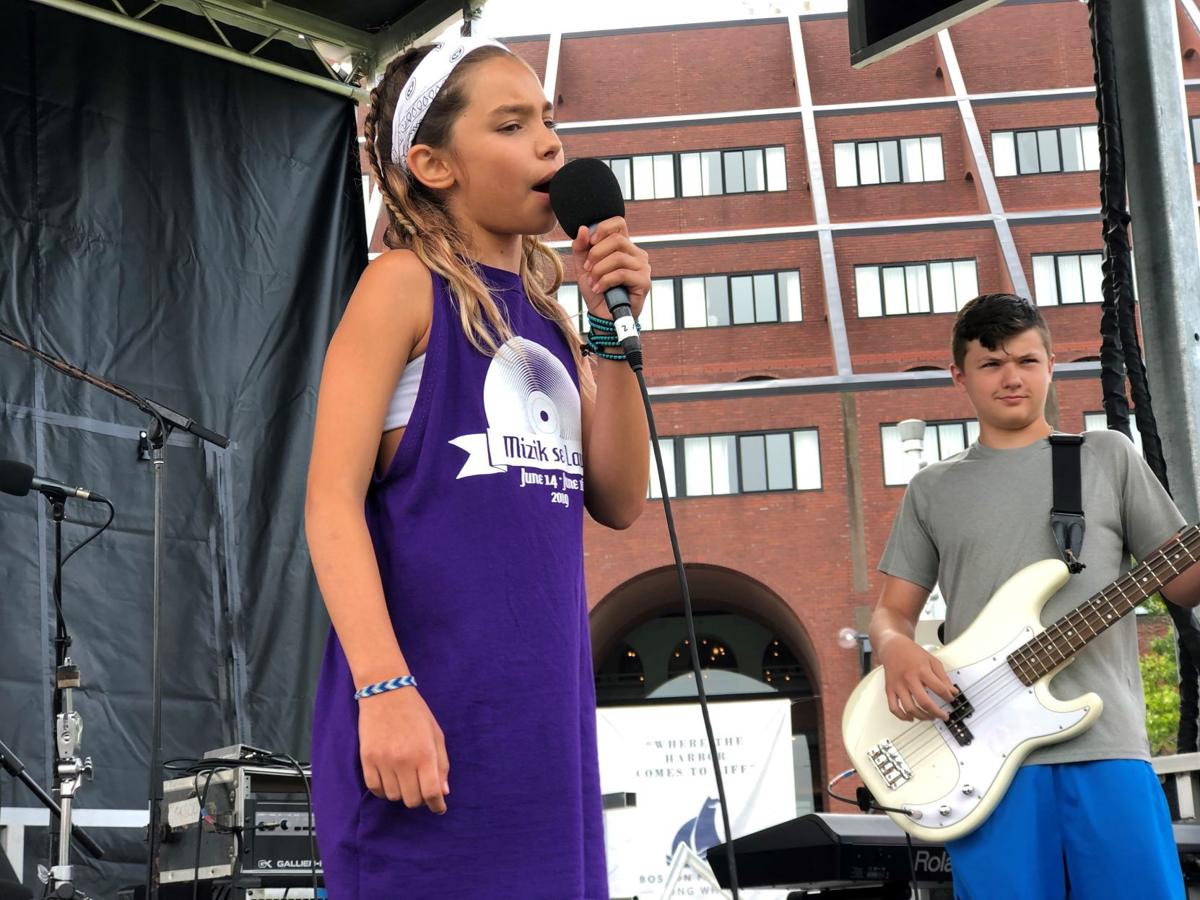 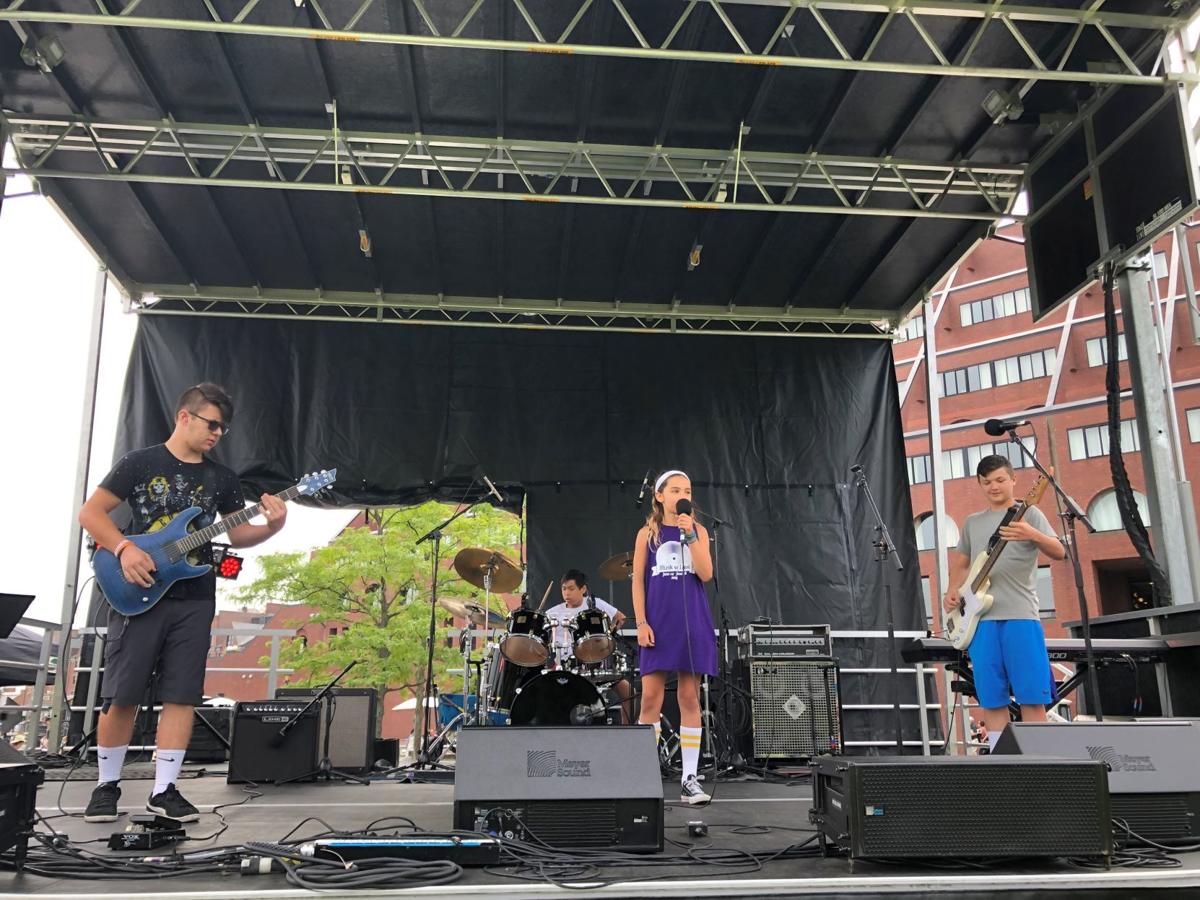 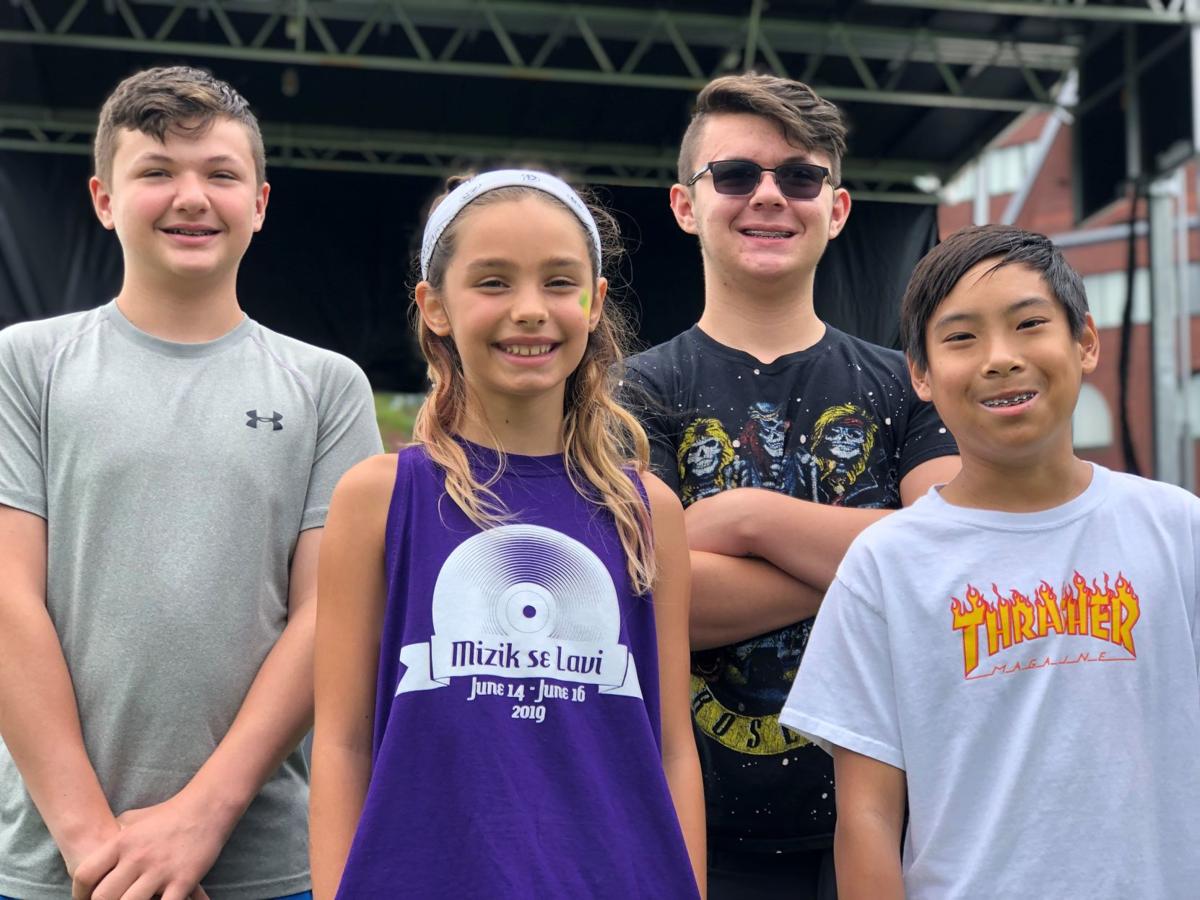 Foxboro residents shared their musical talent on the main stage of 12th annual Boston GreenFest & TechExpo, which was held Aug. 16-18 on the Greenway and Long Wharf in Boston.

Maya Kaiser, 11, (vocals) performed with her band Take Cover. Three of her bandmates are from Needham — Nick Yee, 13 (drums), Cameron Hebert, 16, (guitar), and Matthew Hebert, 14, (bass). She met them through a nonprofit in Needham called Plugged In (pluggedinband.org).

The band performed a 15-minute set including “Immigrant Song” and “Whole Lotta Love” by Led Zeppelin, “Seven Nation Army” by The White Stripes and “Under Pressure” by Queen.

“At first, I was like, ‘Wow, this is really big for me’ before I got on the stage. I was feeling kind of frightened but when I got on the stage I had a relief out of my body and I felt really good and I was proud of myself,” said Maya, who rocked the stage charismatically.

“I am so proud of them they did awesome and I am crying, “ said her mom, Alyssa Kaiser, right after witnessing her daughter’s big moment.

“I thought Maya rocked really hard. I was just so happy and so proud to see them up there and doing their thing. It’s so great. It brings me so much happiness,” said Paul Kaiser, Maya’s father, who plays the drums and graduated from Berklee College of Music.

“Maya was a musician before she was born. I would visit Paul’s West African Drum and Dance class at Berklee College of Music when she was in my belly,” said her mom. “When Maya was little, she was always humming and singing to herself. I cannot pinpoint when we knew that she was a singer. We are always evolving as humans and Maya is dedicated to perfecting her craft, remains true to herself and sets the bar high. We are so very proud.”

“Maya is an awesome vocalist for an 11-year-old. When I first heard her, I was like, wow, she’s good. And then I hear she was only 11, she’s awesome,” said bandmate Hebert.

Brin Cox, who came to Boston from Foxboro to support Maya with her two daughters, thought the performance was incredible.

“Maya was awesome, very magnetic, and the band was, too. They were so good and so confident. I was just really proud of all of them,” said Cox.

“Maya is naturally gifted as a singer and musician. What makes Maya’s singing even more special is that she opens her heart when she sings and effectively conveys emotion,” said Sandra Rizkallah, co-founder of Plugged In who has known the young singer for almost one year.

Evens Gregoire, a Foxboro resident and Hatian singer-songwriter (evensgregoire.com), performed on Aug. 19 at the main stage. This was his second year performing at GreenFest.

“I had a wonderful performance. At first, I thought that I did not have enough time and was rushing a little bit to give the last performers their chance. However, I was amazed and encouraged that afterward, people came to me saying how much they had enjoyed my music,” said Gregoire.

Karen Weber-Salamanca, founder and director of the festival, said GreenFest is particularly important for children since they risk dealing with the most severe impacts of unchecked climate change.

“Having Jaden Onwuakor open our second day with his powerful voice and his pure heart is incredibly meaningful,” she said. “We hope everyone could feel the strength of his youth and his vulnerability as he sang out to all those in the park and out to the forces of the universe.

“This too goes for Maya and her band. Their heart-winning performance was a vivid reminder to all that our youth are capable, creative and courageous. They are here to confront the challenges our earth hands them and to overcome them.”

Boston GreenFest & TechExpo is organized by Foundation for a green future and its team.