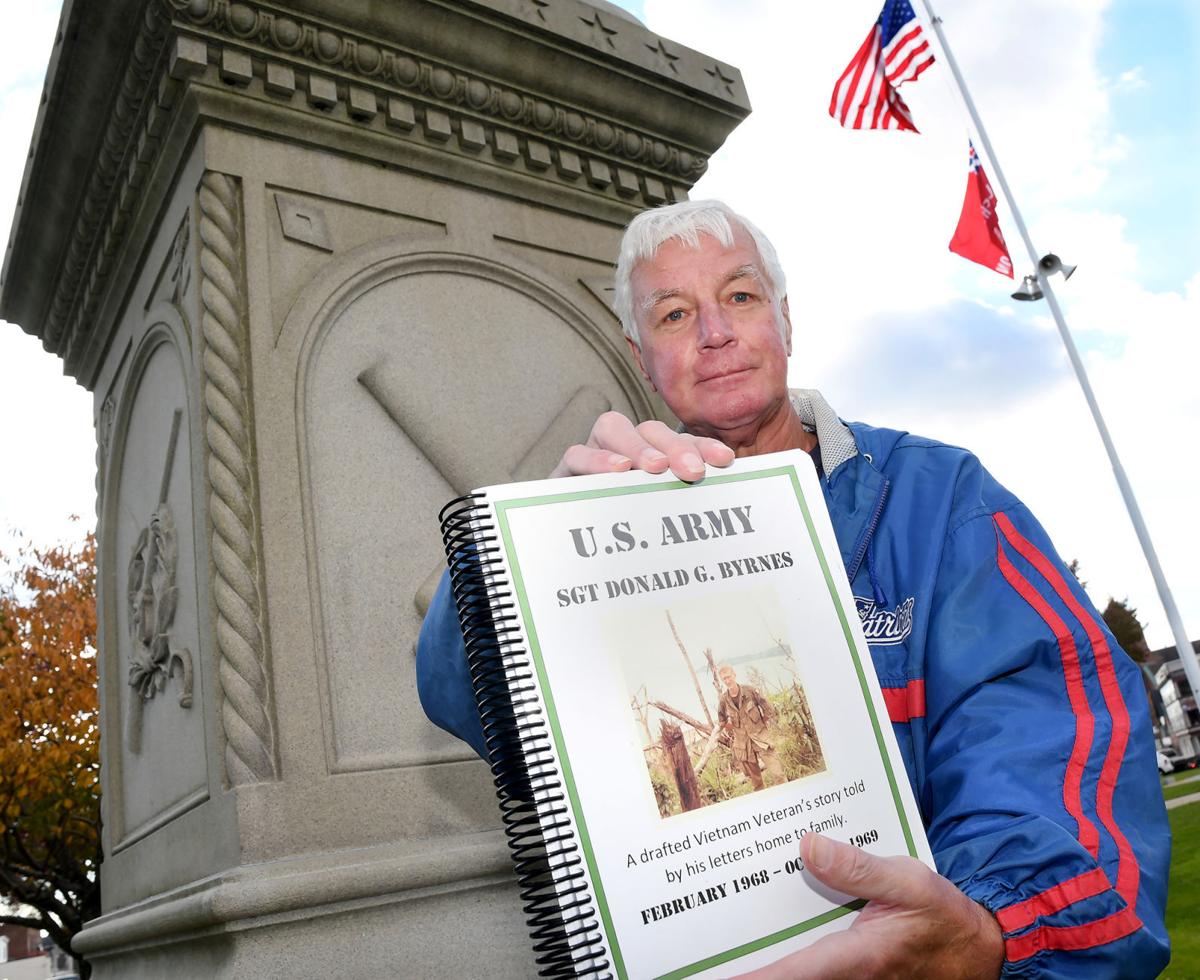 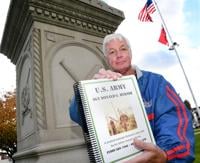 Bill Byrnes, above, holds a book his son Army veteran and Foxboro police Sgt. Adam Byrnes compiled of his uncle Army veteran Donald Byrnes’ letters home from Vietnam Wednesday on Taunton Green. The book is more than 500 pages of hand-written letters, photos, documents and other mementos of Donald’s daily life when he served from 1968 to 1969 as a combat soldier in Vietnam. Below, Donald Byrnes is pictured in Vietnam during his service. 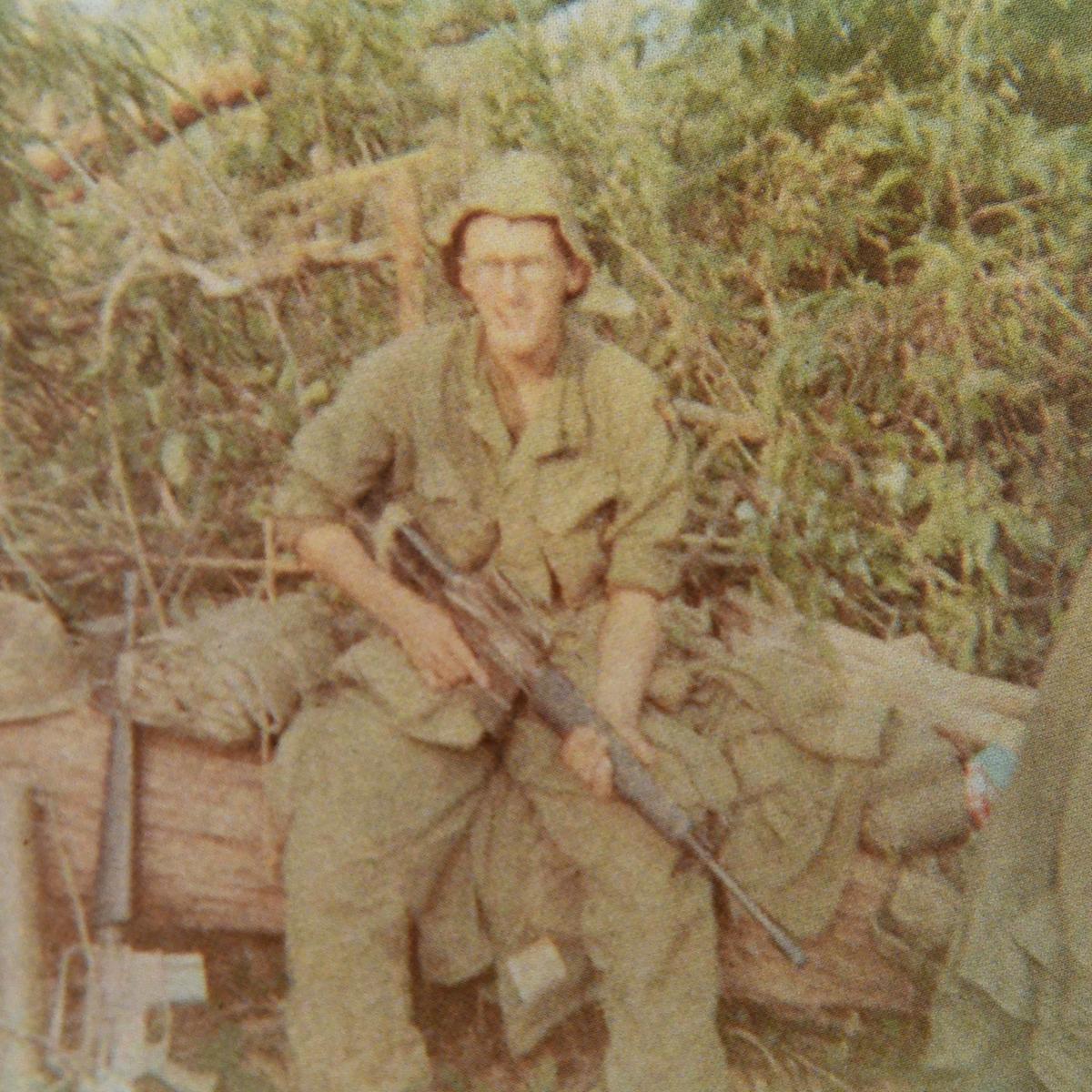 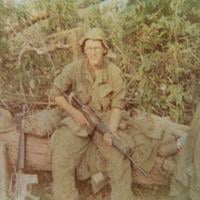 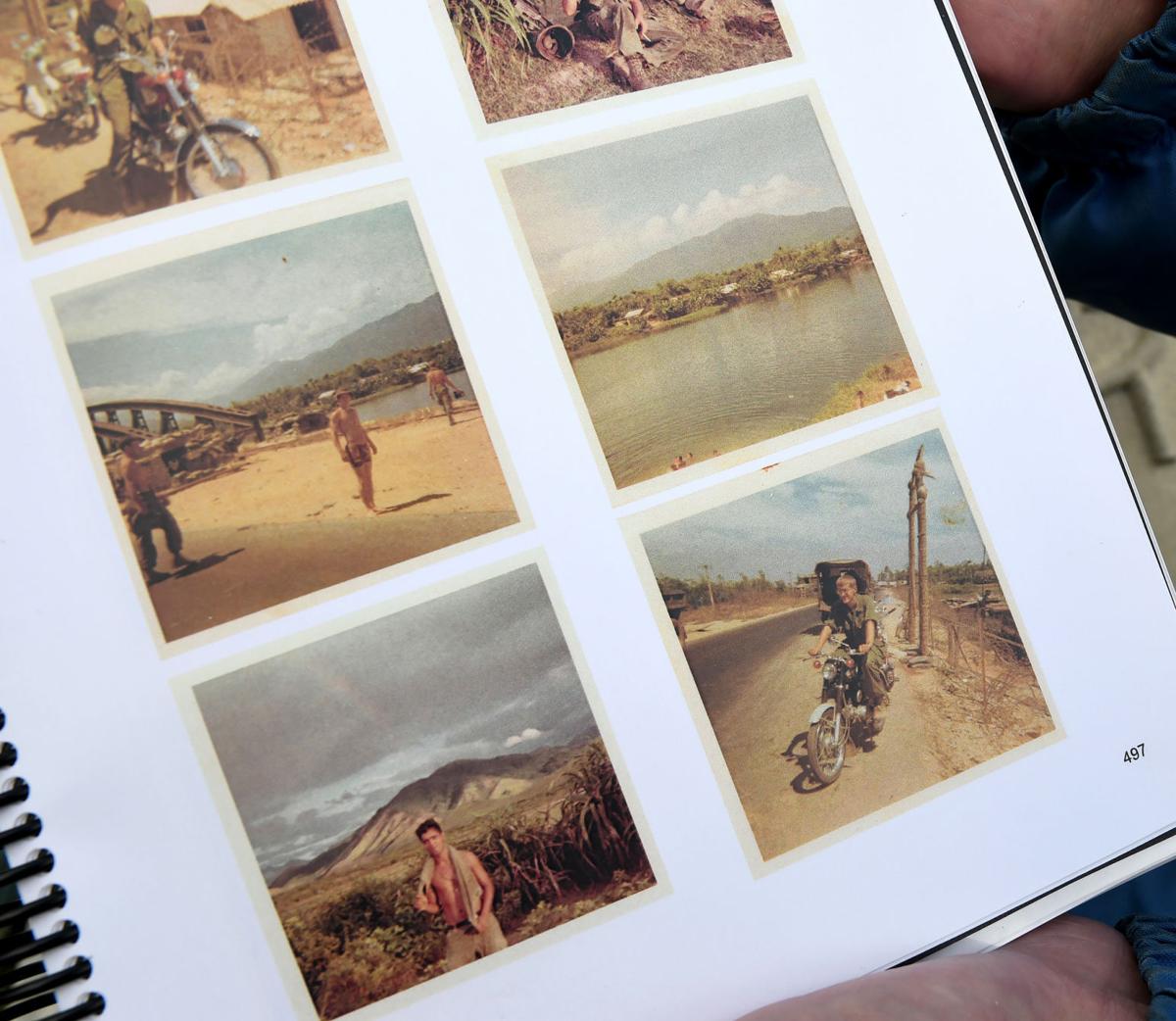 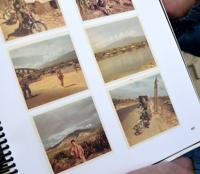 Photographs in the book of Donald Byrnes’ letters from Vietnam.

Bill Byrnes, above, holds a book his son Army veteran and Foxboro police Sgt. Adam Byrnes compiled of his uncle Army veteran Donald Byrnes’ letters home from Vietnam Wednesday on Taunton Green. The book is more than 500 pages of hand-written letters, photos, documents and other mementos of Donald’s daily life when he served from 1968 to 1969 as a combat soldier in Vietnam. Below, Donald Byrnes is pictured in Vietnam during his service.

Photographs in the book of Donald Byrnes’ letters from Vietnam.

Donald G. Byrnes is 75 now and living out the remainder of his life in an assisted living facility with an ocean view in Plymouth.

Byrnes, an Attleboro native, is a combat veteran of the Vietnam War.

He left Vietnam about 53 years ago, but Vietnam has never left him.

And age has taken its toll.

He has memory lapses now and a 100 percent disability for post traumatic stress disorder from the war.

The PTSD was recently diagnosed.

So life is not getting easier for this veteran in his final years.

The shadows of his combat experience which, even if apparently buried, are still alive in his subconscious, will haunt him at some level until the day he passes from the earth.

But the PTSD didn’t prevent him from living a post war life that included careers with the IRS, the U.S. Postal Service and the Massachusetts Department of Revenue from which he retired 20 years ago on Sept. 11, 2001, the day America was attacked by Islamic terrorists and the day it was thrust into another 20-year war, this one against terrorism.

Byrnes’s war was fought against the spread of Communism.

America lost that war in Vietnam and nearly 60,000 of its best men and women.

His one-year tour of duty in the oppressively hot and bloody land in Southeast Asia began in 1968 and ended in 1969.

It was marked by deadly combat in which friends were killed and hundreds of letters were sent home documenting the day to day, the dreariness and sometimes deadly drama.

On the bottom of each missive was a countdown.

One year of hunting and killing the enemy with the hope that the enemy will not kill him.

Today, those letters are in a book for all to read.

Donald G. Byrnes grew up in the far end of the far end of Attleboro, as his brother Bill Byrnes, 73, calls it — the westernmost corner of South Attleboro surrounded by woods and ponds on what at the time was a dirt road called Sibley Street, a stone’s throw from Pawtucket, Central Falls and Cumberland.

“It was like the end of world,” Bill Byrnes said.

The Byrnes brothers’ mom, Lottie, had six brothers and three sisters, some of whom lived nearby.

It was a family enclave of sorts down there at the end of the world on Sibley.

Relatives were within walking distance.

As intelligent as he was, perhaps it bored him.

He dropped out a couple of times, his brother said, but he finally graduated in 1967 as war raged in the jungles and rice paddies of Vietnam and as protestors took to the streets and race riots burned in big cities at home.

Donald was drafted in 1968 and that’s when what has become a family heirloom — a history of a hard time for America and its ordinary Joes plucked off streets like Sibley and sent into combat whether they wanted to go or not — was begun.

But it’s more than an heirloom, it’s a history of the time through one man’s eyes which was experienced by many.

He ended up in the 101st Airborne Division, “The Screaming Eagles” of World War II fame, the bloodiest war ever fought, that ended as he was being born.

And he wrote home about it relentlessly.

And he’s a good writer.

In a 2013 addition to the letters he sent home, he talked about a mission in the A Shau Valley in April 1969.

His unit was hunting the North Vietnamese Army.

“The heat, humidity and bugs were unbearable. Every morning we would start out and there would be no breaks until the first man passed out. The high mountains were killers, but the small hills had no trees, therefore no shade, not to mention no cover if the NVA were around.

My tour was ½ over on April 15th. I made my first deal with God. I told him he could take me now with no arguments or complaints, but if I made it halfway, he had to send me home in one piece. I’d suffered enough. I didn’t receive a verbal response, so I took it as an agreement.”

On April 9th, Donald’s unit got caught in an ambush with bullets flying in from all over.

On that day, he had been assigned to take charge of two squads and was accounting for the members when the NVA hit.

“I no sooner got the names, when the NVA opened up from both sides. We were in a valley, flat as a pancake, no rocks, no trees, and grass only about 1½ feet tall. They were on hills on both sides of the valley. We were caught in a crossfire. (I) was as close as I came to being in a panic in combat. I was lying on the ground, my nose was pushed almost flat into the dirt. I was pulling on my helmet (steel) and in my mind I had pulled it down to my shoulders and was trying desperately to pull it over my hips. I kept repeating, out loud and as fast as I could, “I hope I don’t die, I hope I don’t die, I hope I don’t die.”

And he was certain death was near.

“I prayed that the NVA wouldn’t take my dog tags from my dead body. I wanted to at least be identified when they flew my dead body home…At that point I knew I was dead and I wasn’t going down begging for my life. As many of you know I’ve been blessed with a bad temper…I walked about 20 yards away from my men, stood there giving the NVA the finger and screaming swear words at them…Then two miracles happened…Somehow a couple of gunships found us and blasted the NVA positions…the other miracle was that even we had no cover or protection and were caught in a crossfire only one man died and two were wounded… out of nearly 100 guys…we should have been wiped out…”

His nephew, Adam Byrnes, 42, a sergeant in the Foxboro police department and himself an Army combat veteran with two tours of duty in Afghanistan and one in Kosovo, found the letters when he and his dad Bill were helping Donald move to his new home in Plymouth.

He read them and has assembled them into a book of 509 pages to honor his uncle’s service.

“Donald’s letters home to his mother and brother (my grandmother and father) from his military service and his tour in Vietnam sat in a metal sewing container for almost 50 years,” Adam wrote as an introduction in the Amazon.com website where the book is available.

“When my father and I helped move Donald from his last residence, I had the opportunity to read these letters. I was blown away by the awesome story that his letters told and how well-documented his service was by these letters.”It told the story of the middle son of three, from a poor family in South Attleboro, Massachusetts, who was drafted into the Army.

Donald was drafted into the Army like many others of his generation. He had no intention of joining the military or fighting in the Vietnam War but he accepted his fate.

I believe that the story these letters tell is a great view of what it was like for the average soldier that was drafted during the Vietnam War era.

There are heroics, but they really express the true reality of combat; boredom, loneliness, exhaustion, sadness, and pain, with small increments of sheer terror.”

For Adam and his dad, the letters testify to the heroism of not just Donald, but every man and woman who served in Vietnam.

It was an unpopular war and those who served did not get the respect they deserved when they came home, if they were lucky enough to come home.

This book may help with that, Adam said.

“I would like this book to be an opportunity to help readers increase their awareness and appreciation for our Vietnam veterans,” Adam wrote. “I thank them all, both drafted and those that volunteered, from the bottom of my heart. They fought an unpopular war and were not always recognized upon their return for what they accomplished. They truly sacrificed for us and I am forever grateful for their service.”