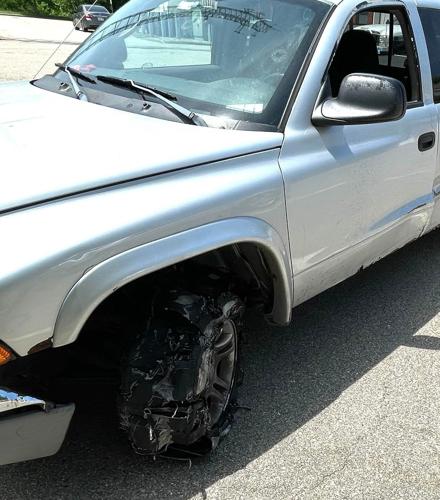 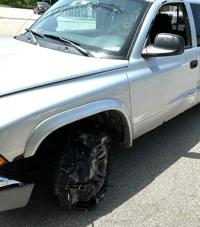 A man driving this pickup truck fled from police on flat tires before he was stopped near Foxboro center early Tuesday morning. 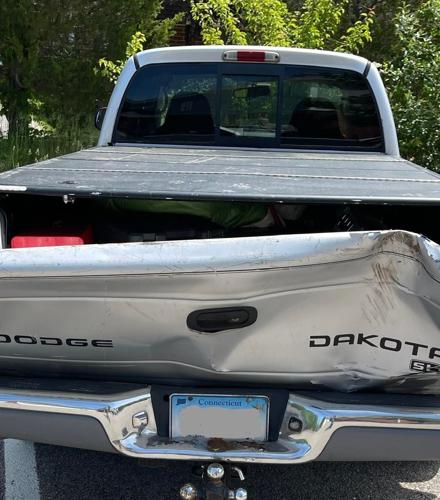 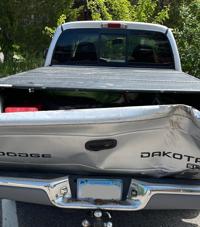 The rear of this pickup truck was damaged after the driver backed into cruisers and a tree before a chase on flat tires early Tuesday morning. The license plate was blocked out by police before they posted the photo on social media.

A man driving this pickup truck fled from police on flat tires before he was stopped near Foxboro center early Tuesday morning.

The rear of this pickup truck was damaged after the driver backed into cruisers and a tree before a chase on flat tires early Tuesday morning. The license plate was blocked out by police before they posted the photo on social media.

Police stopped a driver fleeing Wrentham police in a slow-speed pursuit by using a tire deflation device to flatten two of the tires on his pickup truck as he entered the town common early Tuesday morning.

Officers were notified of the chase about 3 a.m. as it was approaching Foxboro on Route 140.

Wrentham officers were following the pickup truck, which had one flat tire, at speeds around 30 mph, after the driver allegedly struck two police cruisers and nearly hit officers in Wrentham, police said.

Officers Steve Hole and Brendan Fayles positioned themselves near the rotary in the center where they blocked the rotary from inbound traffic to keep other motorists safe from the pursuit, police said.

As the pickup truck approached, Hole was able to deploy tire deflation devices, causing two flat tires when the suspect, George D. Andrews, 51, of Warwick, drove over them.

The pursuit ended safely a short distance away on South Street, according to police.

“All Foxboro cruisers are equipped with Stop Sticks and all of our staff has been trained in their use,” police said in a statement, referring to the tire deflation devices.

“Though their usage is rare,” police said, “we are glad to see that a dangerous incident was able to be ended safely and successfully.”

Andrews was arrested by Wrentham police and pleaded innocent to multiple charges, including assault by means of a dangerous weapon, failing to stop for police and resisting arrest. He was ordered held in jail in $1,000 cash bail.

A pretrial conference was scheduled next month.

The business was closed at the time. After conducting a routine license plate check, officers attempted to stop the vehicle but the suspect drove away with his headlights off, McGrath said.

Police pursued the pickup as it turned off Route 1 onto Madison Street and then to Melanie Lane, a cul-de-sac.

Andrews attempted to drive around the officers before entering a driveway where police blocked the vehicle, according to a police report.

The suspect refused all commands to turn off the pickup truck and throw the keys out of the vehicle, which was also occupied by a barking pit bull, according to the report.

When Plainville and Norfolk police arrived to help, officers placed deflation devices under the truck’s tires in case the suspect attempted to flee again.

When officers were speaking to Andrews in an attempt to de-escalate the situation, he was smoking from a marijuana pipe, according to a police report.

Andrews also allegedly told the officers he did not know why he was being stopped, and expressed concern about what would happen to his dog.

When the suspect again refused commands, McGrath said officers broke the driver’s side window and deployed non-lethal pepper spray to get him to comply.

At that point, Andrews allegedly accelerated his truck, backed into a tree before hitting the side of one cruiser and the front of another, nearly striking police officers, according to the report.

Andrews allegedly fled on Madison Street with flat left front tire to East Street. He was followed for about four miles until he was stopped in Foxboro, according to police.

After Andrews was taken out of the truck and arrested, his dog was taken by the animal control officer, according to police.

The suspect also faces charges of leaving the scene of property damage, driving an uninsured and unregistered motor vehicle, attaching plates and a license plate violation.