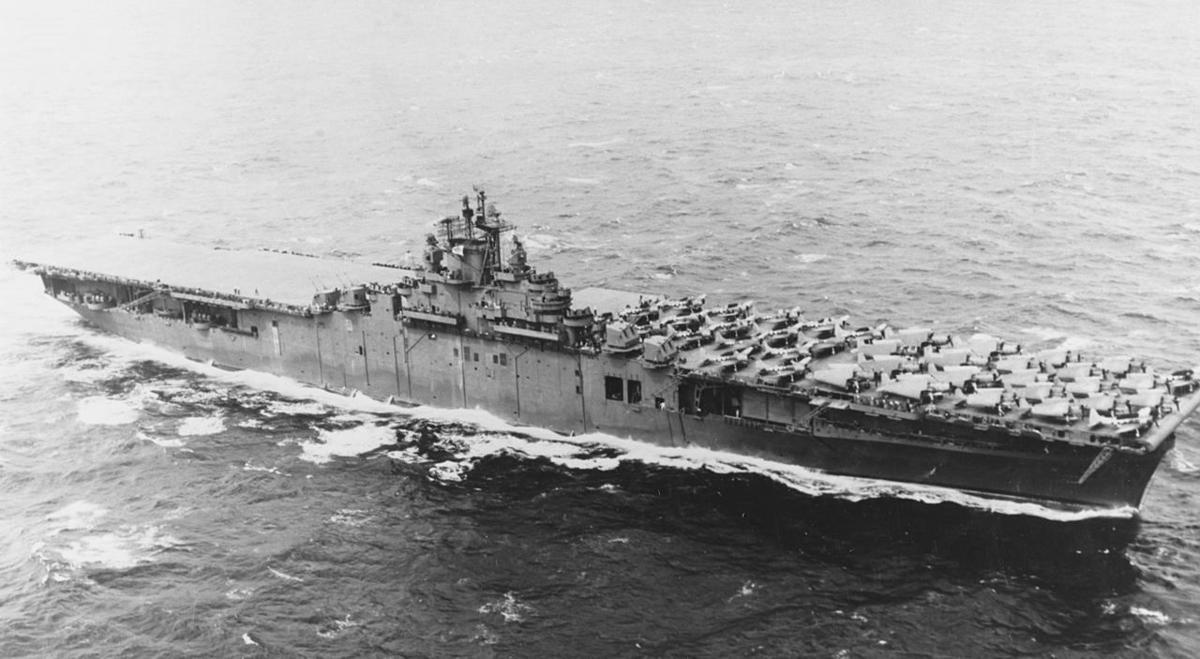 The recently commissioned USS Lexington steams west from Pearl Harbor on Nov. 12, 1943. Among those aboard was Arthur Melvin “Mel” French, who recorded his experiences in a remarkable World War II diary. This vessel was the second Lexington to sail during the Pacific war. Its predecessor was scuttled after being irreparably damaged during the Battle of the Coral Sea in May 1942. 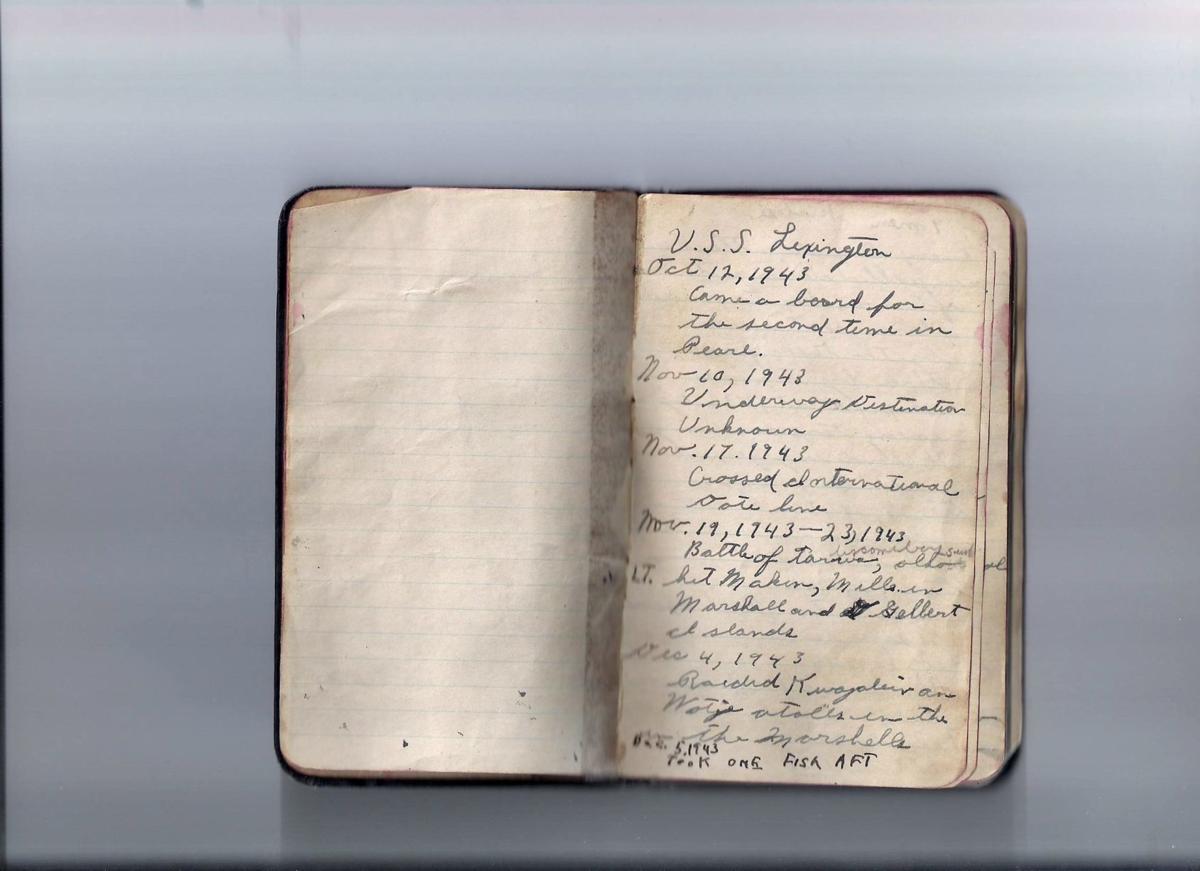 The first page of Melvin French’s WWII diary aboard the USS Lexington shows him boarding the ship in mid-October 1943 with the terse entry on Nov. 10: “Underway. Destination unknown.” 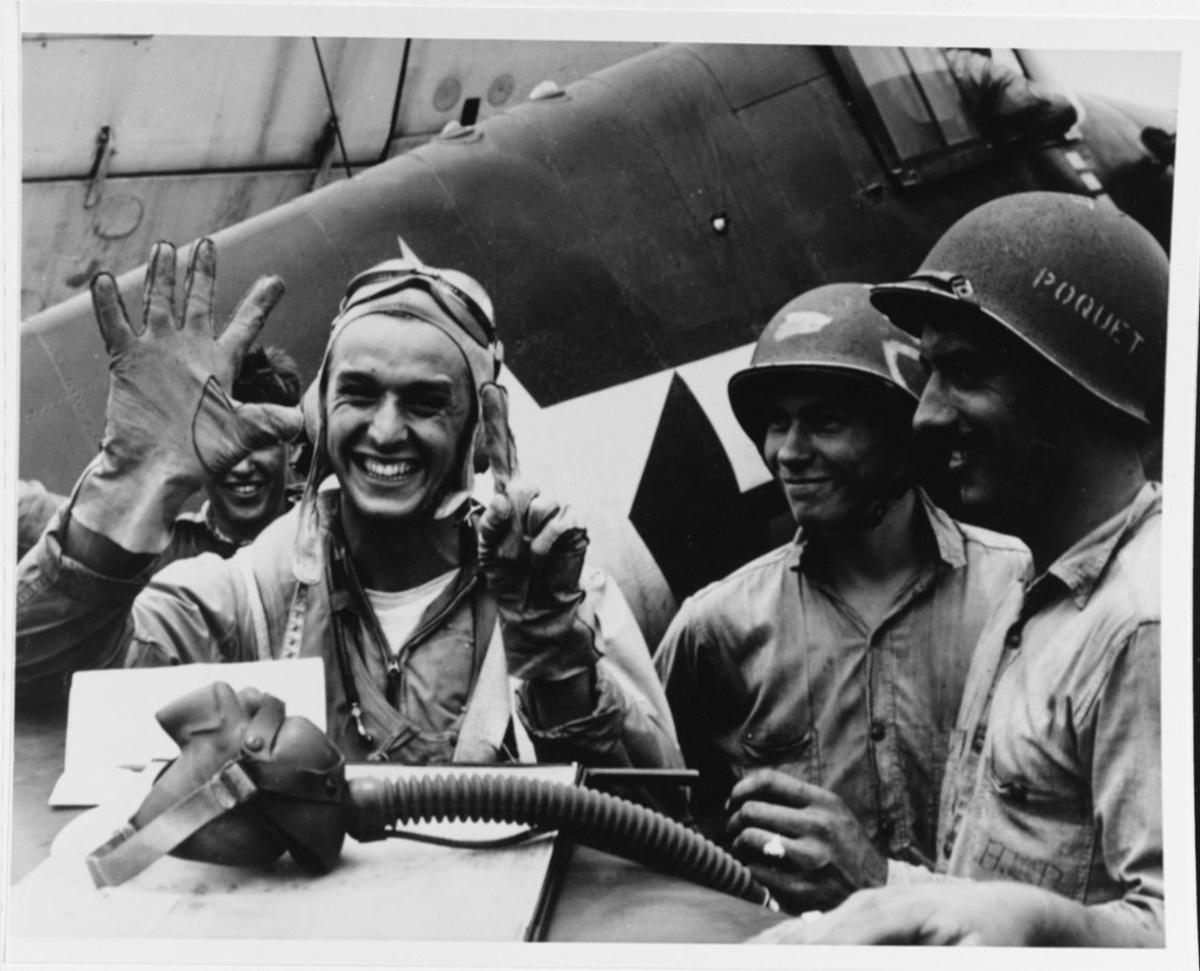 The recently commissioned USS Lexington steams west from Pearl Harbor on Nov. 12, 1943. Among those aboard was Arthur Melvin “Mel” French, who recorded his experiences in a remarkable World War II diary. This vessel was the second Lexington to sail during the Pacific war. Its predecessor was scuttled after being irreparably damaged during the Battle of the Coral Sea in May 1942.

The first page of Melvin French’s WWII diary aboard the USS Lexington shows him boarding the ship in mid-October 1943 with the terse entry on Nov. 10: “Underway. Destination unknown.”

Seventy-five years ago this week, Arthur Melvin French was a 19-year-old seaman marking the new year with shipmates aboard the U.S.S. Lexington, part of a massive armada pounding its way across the Pacific and rewriting the rules of naval engagement.

Born in 1925, French was 17 years old in May 1942, just six months after the Pearl Harbor attacks, when he dropped out of Chelsea High School to enlist in the Navy.

Known by his middle name, Melvin — or “Mel” for short — he attended basic training at Newport Naval Base and served briefly aboard the U.S.S. Ranger, U.S.S. Independence and, nearer the war’s end, U.S.S. Ticonderoga — all aircraft carriers. But most of his combat duty was aboard the Lexington.

The eldest of eight children, French died on Nov. 29, 1958, just nine months after purchasing a house on Ledgeville Road in Foxboro — felled by a kidney infection that relatives say was related to shrapnel wounds sustained during the war.

But his story lives on in a remarkable wartime diary recently shared by his younger brother, William French, who lived on Chestnut Street for nearly six decades before downsizing to a smaller home in Plainville three years ago.

“I was surprised to find out about the diary because he never was much of a writer,” William French said.

In charge of an anti-aircraft battery on the Lexington, Mel French’s service coincided with the epic U.S. advance across the Pacific — beginning with the Tarawa landings, the decisive battles of the Philippine Sea and Leyte Gulf and the subsequent landings at Iwo Jima — that turned the tide of war after the initial disasters at Pearl Harbor, the Philippines and Bataan.

For much of that period, the Lexington served as the flagship of Vice Adm. Mark Mitscher, commander of Task Force 58 — the Navy’s fast carrier force operating in the Pacific Theater.

The vessel was actually the second U.S.S. Lexington to sail during World War II and the fifth to bear the Lexington name; its immediate predecessor was scuttled after being irreparably damaged at the Battle of the Coral Sea in May 1942.

Constructed at the Fore River Shipyard in Quincy, the new Lexington originally was to have been named the U.S.S. Cabot, but shipyard workers petitioned the Navy Department suggesting that Lexington be substituted instead. The idea was adopted and the new Lexington — or “Lady Lex,” as it was known — was commissioned on Feb. 17, 1943.

French’s introduction to combat wasn’t long in coming. Little more than a week later, from Nov. 20-24, the Lexington participated in covering actions during the landings on Tarawa Atoll in the Gilbert Islands, the first American offensive in the central Pacific. The battle claimed the lives of nearly 1,000 Marines and 4,700 Japanese and Korean defenders in 76 hours of brutal combat.

Ten days later, the Lexington had steamed some 600 miles northwest to initiate a raid at Kwajalein Atoll, a notorious prison island that had been the site of many executions of captured Allied pilots and sailors. On the morning of Dec. 4, aircraft from the Lexington sunk a Japanese transport ship, damaged two cruisers and downed 30 enemy aircraft.

Later that night Japanese planes responded in kind, with a torpedo bomber knocking out the Lexington’s steering gear.

Five days later, the Lexington arrived back in Pearl Harbor for emergency repairs — “with God’s Help,” French’s diary reads — and from there onto Bremerton, Wash., where the ship spent a month in dry dock and French enjoyed a 21-day shore leave.

In late February 1944, the refitted Lexington stopped by Pearl Harbor on route to link up with the Fast Carrier Task Force now operating in the Marshall Island chain. This flattop armada under Mark Mitscher was organized into four battle groups: one including the Lexington, Enterprise, San Jacinto and Princeton; a second featuring the Hornet, Yorktown, Belleau Wood and Bataan; a third with the Bunker Hill, Wasp, Cabot and Monterey; and a fourth including the Essex, Langley and Cowpens.

The mobility and striking power of this task force became evident in mid-March, when Mitscher unleashed a three-week sweep of Japanese positions which French chronicled in a series of terse diary entries:

According to military historian James Hornfischer, “The mobility of carrier power was never more impressive as Mitscher carried out this round-trip of 600 nautical miles, launching the first attacks against Palau on March 30. The next day his carriers hit the western Carolines, about 350 miles south of Guam.”

In his 2016 book, “The Fleet at Flood Tide,” Hornfischer said the ground-breaking raid resulted in the destruction of 29 minor auxiliary ships and 214 Japanese aircraft, at a cost of just 25 U.S. planes.

More significantly, it marked the evolution of the U.S. Pacific Fleet as an integrated transoceanic striking force that combined conventional naval warfare capabilities with aviation and pioneered the emerging age of carrier-based warfare in support of coordinated amphibious landings.

By then, established doctrine that carriers could not defend against enemy air attack had been abandoned. With emerging technologies in radar and ship-to-air communications, several groupings of three or four carriers could operate both offensively and defensively – providing flexibility and offensive power which had not existed previously.

For Melvin French and his shipmates, however, there was little time to ponder these tactical developments — even had they been so inclined.

On April 13, the Lexington steamed from anchorage in Majuro in support of Army landings at Hollandia in Dutch New Guinea — then began another series of raids which culminated with a return trip to the massive installation on Truk in the Carolines, the greatest Japanese base in the Central Pacific (an initial raid to neutralize Truk was conducted in mid-February).

April 29, 1944: “Raid on Truk. Ship under attack. Two bombs dropped alongside. One Jap shot down by ship’s batteries, another by Lex’s fighter planes. Three of our planes failed to return.”

April 31, 1944: “Hit Truk again today, shelled by our cruisers. One Jap sub sunk by our destroyers. Under attack just before sundown by Jap dive bombers which made another near-miss on Lex. Two more of our planes downed.”

Among those forced to ditch at sea, but later recovered and returned to the Lexington was naval ace Alex Vraciu — who six weeks later was toasted as a national sensation by recording six kills in what became known as the “Great Marianas Turkey Shoot.”

On June 6, 1944, while Allied forces were staging the largest seaborne invasion in history along a series of beaches on the Normandy coast, the Lexington once again hoisted anchor and sortied from Majuro towards what French once again described as “destination unknown.”

His next entry, penned three days later, provided the answer.

This “working over” consisted of softening up defenses on all three islands in preparation for the amphibious landings on Saipan, scheduled for June 15. Beginning on June 11, while U.S. battleships bombarded the island, carrier-based aircraft launched a series of coordinated sweeps against positions on all three islands — the Hornet task group targeting Guam, the Bunker Hill group operating against Tinian, and both the Essex and Enterprise groups taking aim at Saipan.

They weren’t the only ones “working over” the enemy. U.S. submarines had been tasked with intercepting Japanese convoys ferrying reinforcements and supplies to enemy installations on Saipan. They preyed upon Japanese troop transports with appalling loss of life.

June 15, 1944: “Troops landed on Saipan. 80,000 landed at 8:30 this morning. Radar picked up twin- and single-engine planes. The Lex shot down 4... The ship had five or more fishes fired at her [from enemy torpedo bombers]. One came so close to our starboard side that if we had just one more coat of paint I wouldn’t be writing this today. Them suckers never had a chance. Most of them were shot down before they could launch their fish. It was like the 4th of July at home with the fireworks, only this was for keeps.”

Desperate to maintain its foothold on Saipan, the Japanese counterattacked in what became the Battle of the Philippine Sea (nicknamed the “Great Marianas Turkey Shoot) on June 19-20. By now, American strength was irresistible. Japan lost three carriers, nearly 600 aircraft and saw numerous other ships sidelined with major damage.

June 19, 1944: “At 10 o’clock we went into General Quarters. Large groups of bogeys, all types of planes. This is it — one hell of a day. Our final score for today is … 300 planes shot down by the task force and more shot down by the ships’ AA fire. What we got today amounts to about half of the Jap air force. We secured from GQ at about 4:30 — six and a half hours of hell for them Japs.

“We just got word that our subs have put three holes in one of their flattops. We are making all effort to catch up; when we do it’s a fight to the end. It was sunk two hours after we got word from the subs they nailed one down for us. Three Zekes [land-based fighters] and one Betty [a land-based bomber] were shot down today.”

The eventual capture of Saipan, Tinian and Guam provided necessary airbases for the massive land-based bombing campaign which, fueled by American industrial output, ultimately sealed the fate of Japan’s aspirations in the South Pacific and beyond.

But before then, Mel French would experience yet another year of intense combat, culminating with a decisive naval engagement at the Battle of Leyte Gulf and a transfer to the U.S.S. Ticonderoga, prior to his discharge in December 1945.

NEXT WEEK: The story continues as Melvin French observes first-hand the carnage wrought by kamikaze attacks on the U.S.S. Lexington.