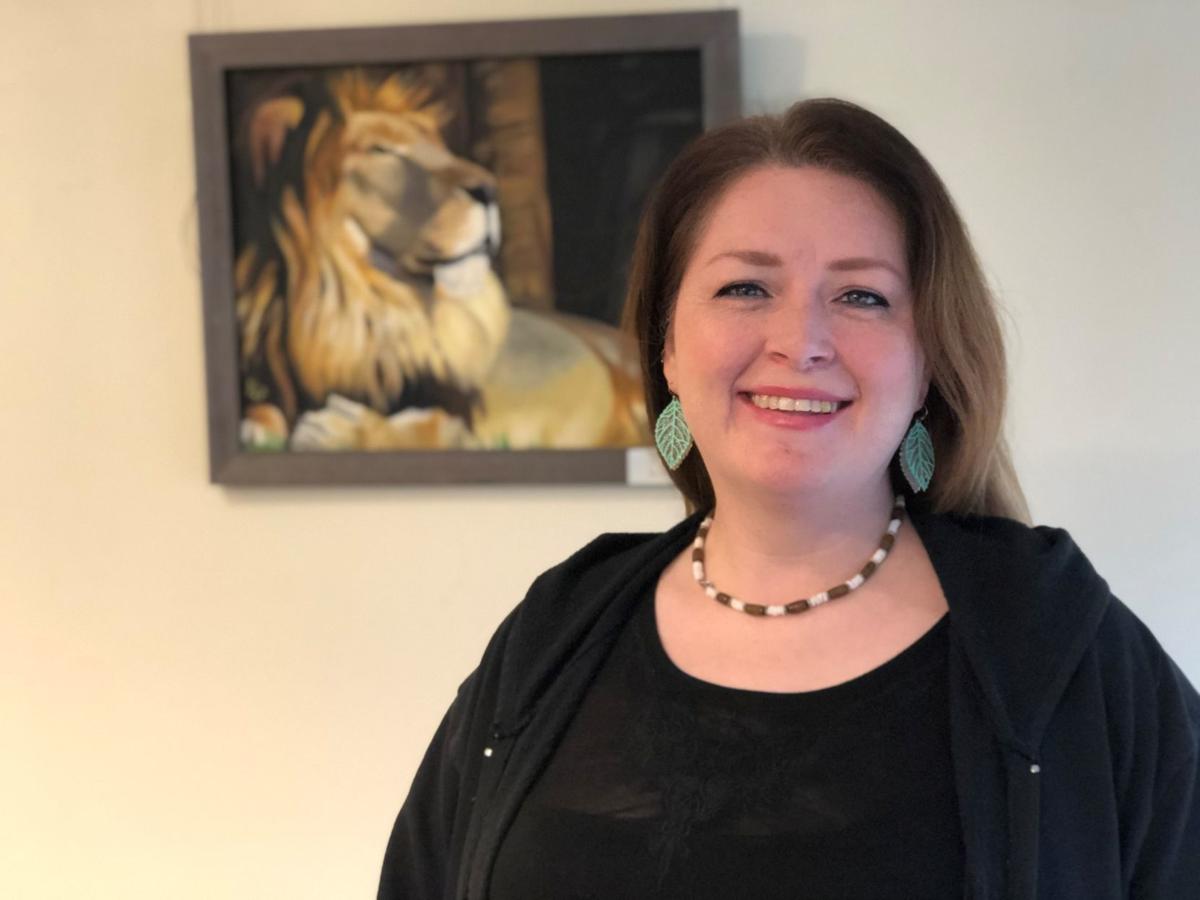 Kerri Fitzgerald stands in front of her painting of a lion who she recalled from working at the Franklin Park Zoo. 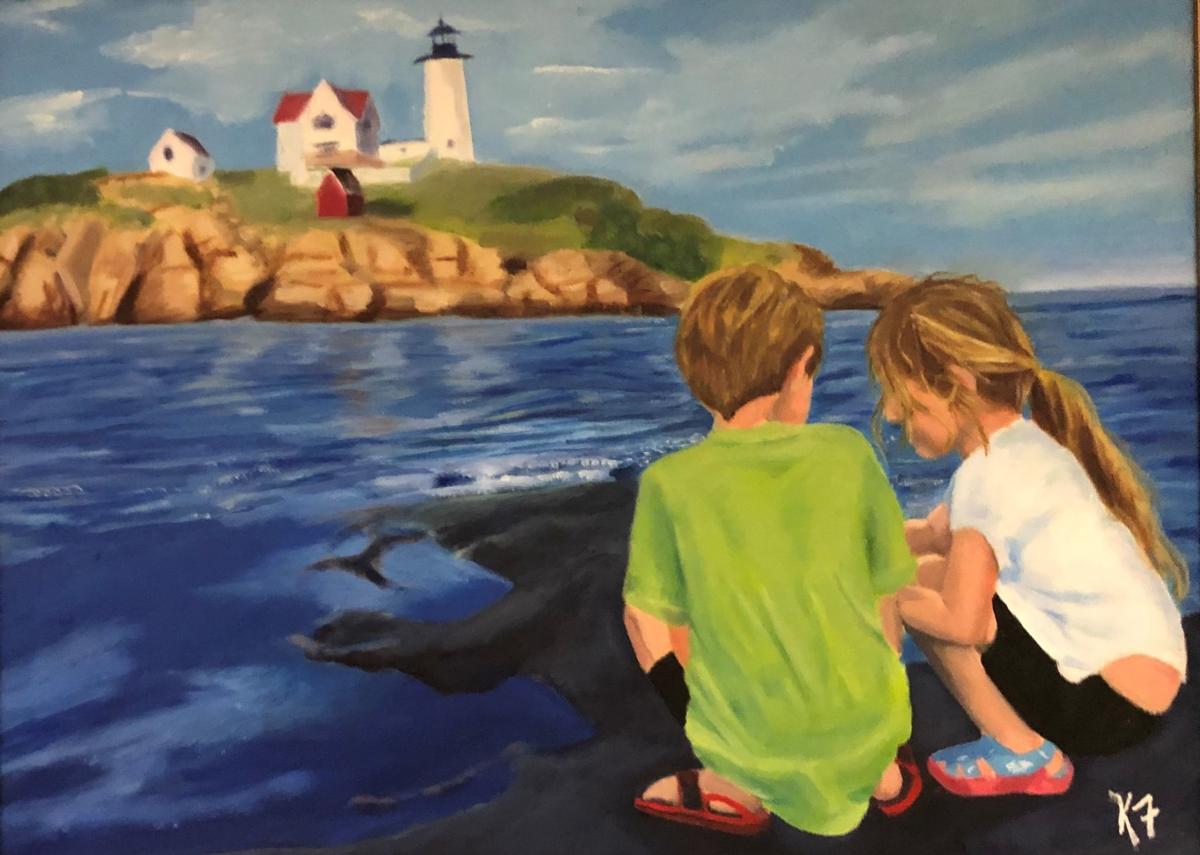 A painting by Kerri Fitzgerald of her children at York Beach, Maine with the Nubble Lighthouse in the background. 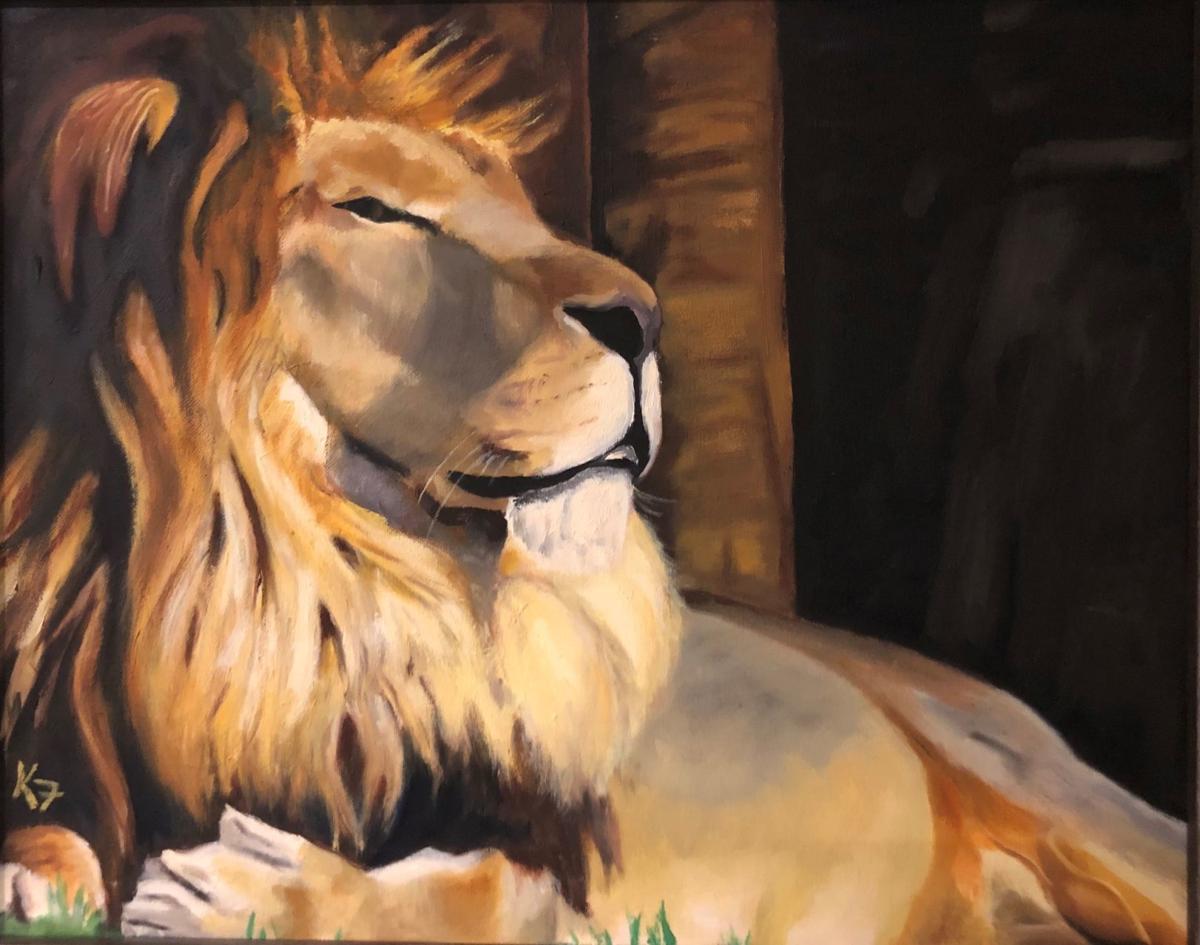 Kerri Fitzgerald’s painting of the late Christopher the lion from Franklin Park Zoo where she worked for 10 years.

Kerri Fitzgerald stands in front of her painting of a lion who she recalled from working at the Franklin Park Zoo.

A painting by Kerri Fitzgerald of her children at York Beach, Maine with the Nubble Lighthouse in the background.

Kerri Fitzgerald’s painting of the late Christopher the lion from Franklin Park Zoo where she worked for 10 years.

Though a person may have passion as an artist, sometimes life gets in the way of the creative process.

That is what happened to Foxboro resident Kerri Fitzgerald, whose job first as a zoo employee and then new role as a mother put a squeeze on her time to paint.

But it was also those life experiences that have influenced her art, some of which is on display throughout January in the community room of the Boyden Library.

Fitzgerald is currently a professional pet sitter/dog walker at A to Zoo Pet Care in addition to painting and being a parent along with her husband Mike to two children Cameron, and Skylar, a second-grader and kindergartner, respectively, who both attend Igo Elementary School.

Fitzgerald has been drawing and painting since she can remember.

“I grew up in a large family (six siblings) which was great. But sometimes to escape I would hide in my room and just draw and paint whatever was in front of me for hours,” said Fitzgerald, who went to UMass Boston majoring in studio art.

Fitzgerald didn’t intend to take a break from painting, but at the age of 23, she landed her dream job and began working at the Franklin Park Zoo in Boston. She became a senior zookeeper working with gorillas and smaller primates and also becoming the lead trainer for the resident pygmy hippo.

“I loved that job but it was physically and mentally demanding and left little time for my other passion for painting when I wasn’t at work. I was there for 10 years and in that time I painted very little, if at all. I left the zoo a few years after having my first child and I had my second soon after. At that time I didn’t paint much either. I was just adjusting to being a mom,” she said.

Fitzgerald started painting again when her husband enrolled her in a class as a Christmas gift four years ago.

“He knew I missed painting but couldn’t find the time, so he enrolled me in the class of an amazing local artist. Since then, I have been painting at least once a week in her studio.”

She now takes classes at the Rosemarie Morelli art studio school in Walpole.

“She is an amazing teacher. I’ve only ever worked with acrylic paints, but she teaches in oil. I was very intimidated to start, but she walks you through it with such ease. Oil is my favorite medium now,” Fitzgerald said of Morelli’s instruction.

“I am beyond excited to have my artwork hanging at Boyden Library and to be able to share something that I am passionate about means so much to me. I am humbled for the opportunity,” Fitzgerald said.

She said it takes her long time to finish a piece because she usually has only a few hours a week to paint.

“I could work on a painting forever and never consider it finished. To have my work seen by others, not in my small circle, is amazing and intimidating, but in a good way. It gets me out of my bubble.”

She works mostly in oil but sometimes draws in charcoal. Her future goals are to make more time to paint and to dabble a little more in surrealism.

“You get to express yourself through the way you see things. And it’s very cathartic to just turn on music and paint for a few hours and to see the results and how a painting forms from week to week,” said Fitzgerald who describes her children as inspiration for her to create art. She plans a portrait of each.

“Painting people I know is a challenge for me. I never think I catch them just right. So I’ve been putting it off for a bit. Also, I love painting animals I worked with and loved at the zoo. They all have such unique and amazing personalities and painting them brings it all back for me,” Fitzgerald said.

One of her works on display is an oil painting of late Christopher the lion from Franklin Park Zoo. where she

Manny Leite, director of Boyden Library, said it is always looking for local artists to display their work and Fitzgerald’s are striking for a number of reasons.

“I love Kerri’s oil paintings of the beach and animals but what stands out is the charcoal portrait she sketched in memory of a young man. It’s terrific, I admire her talent,” Leite said.

Future displays include quilts made by a Foxboro resident and works by students from the Sage School.