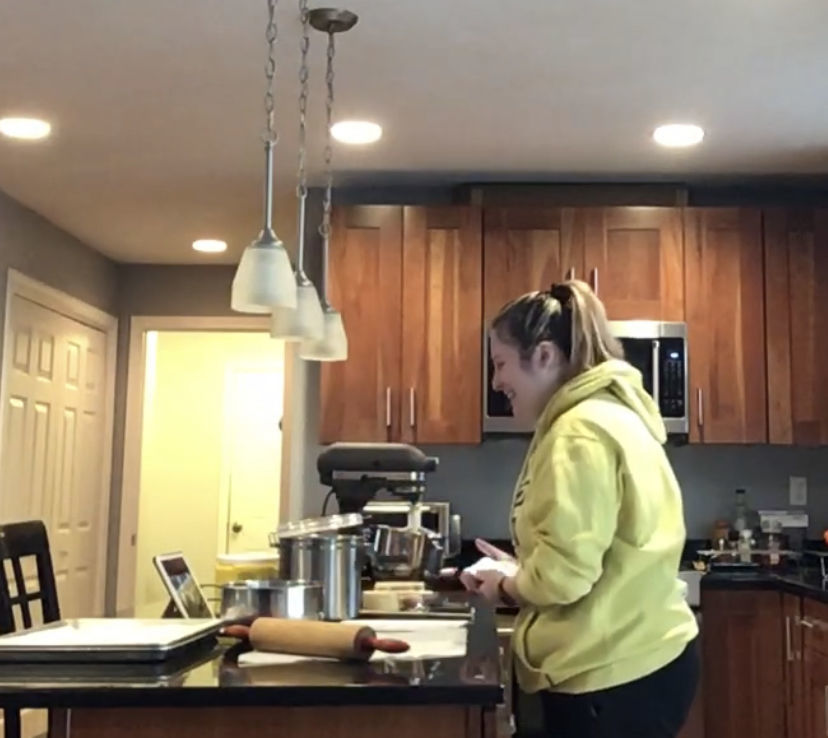 Foxboro High School senior Liv McAndrews cooks in her home kitchen with her class in an online session. 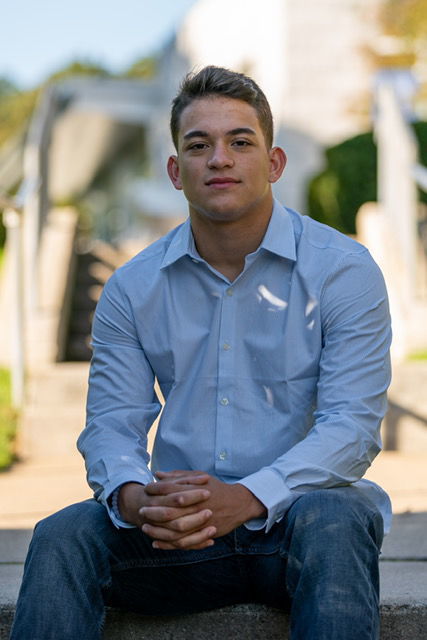 Foxboro High School senior Liv McAndrews cooks in her home kitchen with her class in an online session.

Many students look forward to that final year in high school.

It’s a milestone typically met with anticipation and expectations of sharing it with peers as one chapter closes and another opens in their young lives.

But with the coronavirus wreaking havoc and students confined at home, it will be a much different scenario for the Class of 2020.

And at least some lament the loss of what would have been a traditional closure to their school years.

“The most upsetting thing is not being able to finish off a strong lacrosse season with the family that was built over the four years,” said Foxboro High senior Anita Busznyak.

Fellow senior Liv McAndrews was looking forward to her “senior project,” which is an opportunity for graduating students to spend their fourth-quarter gaining experience in the real world.

“It was set to begin Monday, April 6. I was looking forward to working at Oak Hill Preschool and working with the younger children,” said McAndrews, who will be studying psychology and education, focusing on child psychology, at the University of Tampa in the fall.

She has gotten official word that her senior project has been canceled this year.

“Believing that senior project still had a chance to happen is what kept my friends and me going. Now it feels like this is just the beginning of cancellations,” McAndrews said.

Her mother Jamie said that to say her daughter “is disappointed is an understatement.”

However big the disappointment, she said she is behind the school closure 100 percent and she is an advocate for people staying home.

“Liv’s teachers have been great. She has been in touch with all of them, either through an online class, teams, or email. I am impressed with how quickly they have stepped up to the ‘new normal,’” Jamie McAndrew said.

She said Liv was online with her child development class, taught by Kristen Fichera, baking cookies from scratch.

“It was so fun to see all the students and teachers working together. The superintendent and high school principal have had constant communication with parents which is something I truly appreciate. These are very unsettling times and the only thing we can do is take it day-to-day,” she said.

Former selectman Jim DeVellis, whose daughter Jamie is a senior at Foxboro High, said it is a hard ending for all of the seniors.

“Their basketball championship run was very tough to see abruptly end for the girls after the Garden,” said DeVellis, adding it is not the frustration but the sadness for all in regards to the situation.

Jamie DeVellis said she has been going on walks regularly with her dog but still has quite a bit of school work to keep her busy and misses seeing all her friends and being able to go out and enjoy her last year of high school.

“I’m holding on to hope that we go back and get to do all the things that I’ve been looking forward to since kindergarten. If the rest of the school gets canceled then I’ll be most disappointed that I didn’t get closure. I never thought that Friday, March 13, could have been my last day of high school,” said an emotional DeVellis.

“I can handle being in my house because I can talk to my friends still with all the technology we have now. I’m more upset about missing out on what was supposed to be one of the best years of my life,” she said. “Every time I talk to someone, the first thing they do is apologize for how it’s turning out. I do understand that there are people that have it worse than I do so I don’t want to complain because I have my health and my family.”

Shawn Hardiman, a Foxboro resident who is a senior at Xaverian Brothers High School in Westwood, said he also misses seeing his final year play out.

“I miss just being able to see my everyday buds at Xaverian through the classes and hallways. This spring season is packed with plenty of events that I was looking forward to such as being the captain of an awesome rugby team, prom, senior awards, graduation, etc.,” he said.

“Ever since I was in eighth grade, I fell in love with the sport of rugby and I have put in hundreds of hours training and preparing myself for the most important season of the year which would be my senior year,” said Hardiman, who will be attending Bridgewater State University for aviation management and will also be playing rugby. “Not being able to see the boys during the end of the year stinks, (and) makes you think you took all the times you did have together for granted.”

“Emotionally, I am fine during this quarantine, mostly just find myself bored most of the time just like everyone else I imagine,” he said. “But I try to keep myself occupied by staying fit, cooking food, playing video games, reading, or streaming movies and shows.”

“Luckily during this day and age, I can connect with my friends through my phone, but it’s not as enjoyable as that face-to-face interaction.”

His mother Mary said she is disappointed for her son after he’s put in so much work to get to this point.

“It has come to a halt. Senior year has so many milestones,” she said. They did receive some good news, however.

Mary Hardiman said the family received an email from Xaverian confirming they will be holding graduation since Shawn’s class was the first class at Xaverian that opened their seventh grade and now are ready to graduate.

“That alone is a milestone at the school and is even more reason to celebrate,” said Mary Hardiman who thinks her son has taken it far better than she would have at his age.