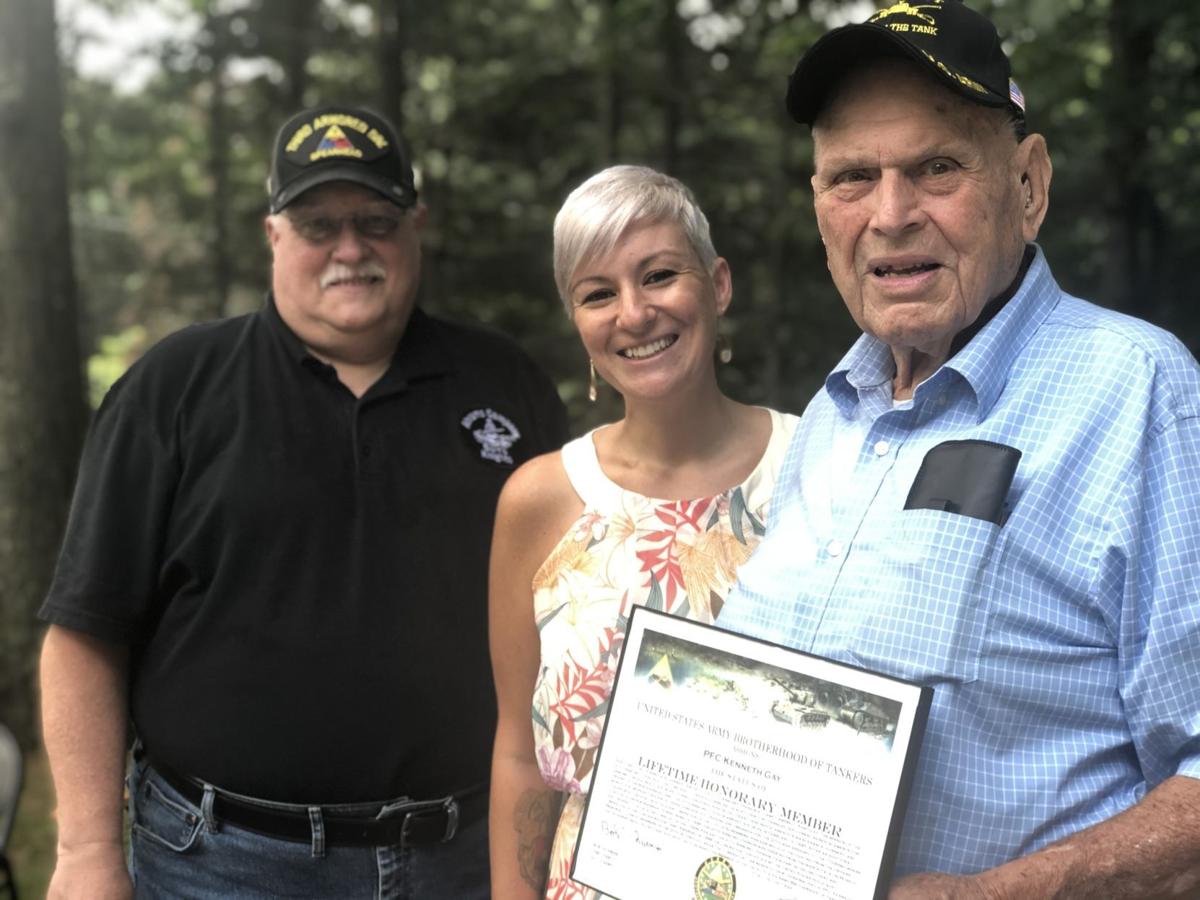 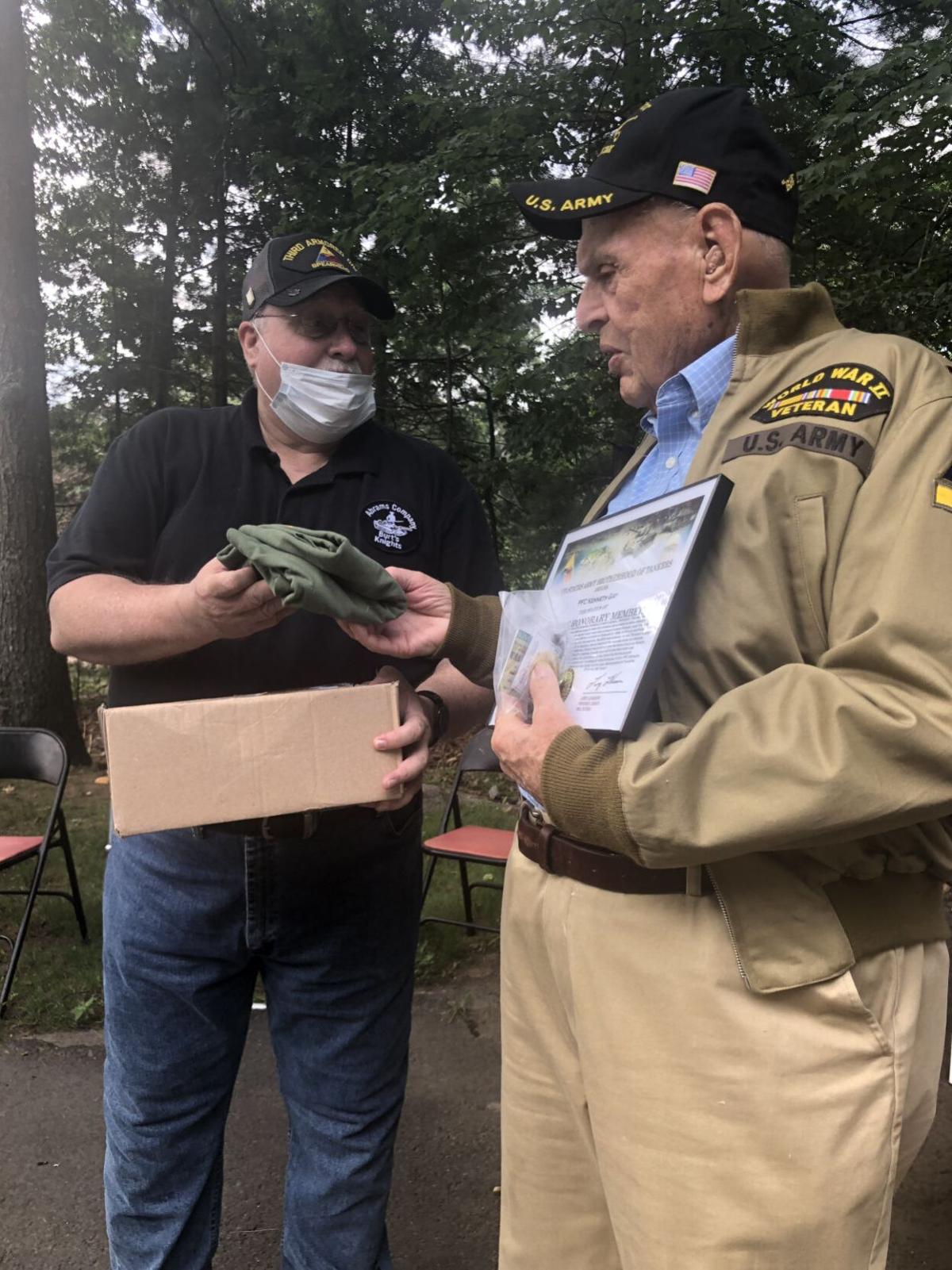 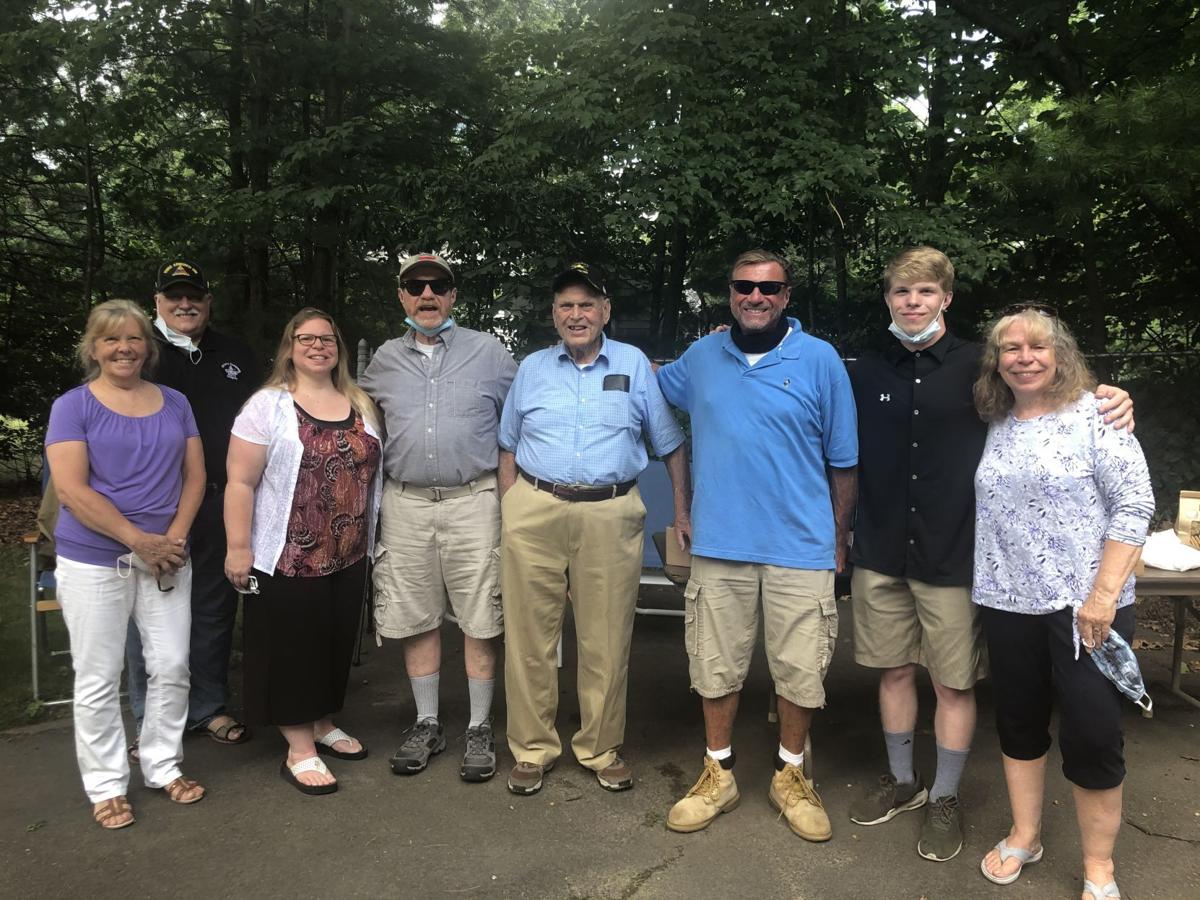 Resident World War II veteran Kenneth Gay was recently recognized for his service, being awarded a lifetime honorary membership to the U.S. Army Brotherhood of Tankers.

The scaled-down ceremony was conducted in the driveway of the 94-year-old’s Walnut Street home last Thursday. Generations of his family, along with a few community members and the town’s veterans agent were among those attending, adhering to coronavirus restrictions.

Gay joined the U.S. Army in November 1943 with the 20th Armored Division at Camp Campbell in Kentucky. The mission of the division at that time was to train soldiers and qualify them for overseas deployment replacements for armored units already in Europe. During this period, Gay helped train the replacements in maintenance, gunnery, and the driving of the M-4 Sherman tank. The 20th armored division arrived in Europe in February of 1945, just in time for the Battle of the Rhein and the liberation of the death camps.

Gay said around that time his monthly salary was $21 per month.

According to Jim Bagdon, an administrative member of the U.S. Army Brotherhood of Tankers, only six World War II tankers remain in this area.

The organzation has 56 members locally and about 1,000 members nationally.

Along with the membership, Bagdon brought coins, a t-shirt, hat and jacket emblazoned with Gay’s last name in observance of his service.

Bagdon, a veteran of the Cold War who was a Tanker M60A1 in Germany, said he met Gay just before the coronavirus pandemic hit and the organization had been trying to set up the ceremony, but because of social distancing and other requirements, had to forgo the usual pomp.

“Kenny is World War II vet (Tanker), that’s where it all started for us, they need to be recognized and that’s why we do this,” said Bagdon adding “we usually try to get 20-25 guys from our group for the ceremony, but it is not fair to Gay and his family right now, so we had to scale it down, unfortunately. When the stuff moves on we will have a bigger party.”

Although it was an untraditional ceremony, Bagdon said it was great to see Gay’s family members from all the generations.

“It’s a wonderful day, I certainly didn’t expect it. Thank you very much,” said Gay who will be 95 on Sept. 7.

His son Daniel Gay said: “It’s very nice that we recognize the heroes we have left from World War II because we have so very few of them around, particularly we are blessed to have my father here.

“It’s wonderful that USABOT recognizes the wonderful gift that these men and sacrifices they made for our country to keep us all safe. We really appreciate everything that they’ve all done for us and for our country.”

During the short ceremony, Gay was surrounded by his sons Michael and Daniel Gay, great grandson Ciarán Connolly, granddaughter Tracy Gay, and daughters-in-law Cherill Gay and Pat Gay, along with a few Foxboro Rotary Club members of which Gay is a founding member.