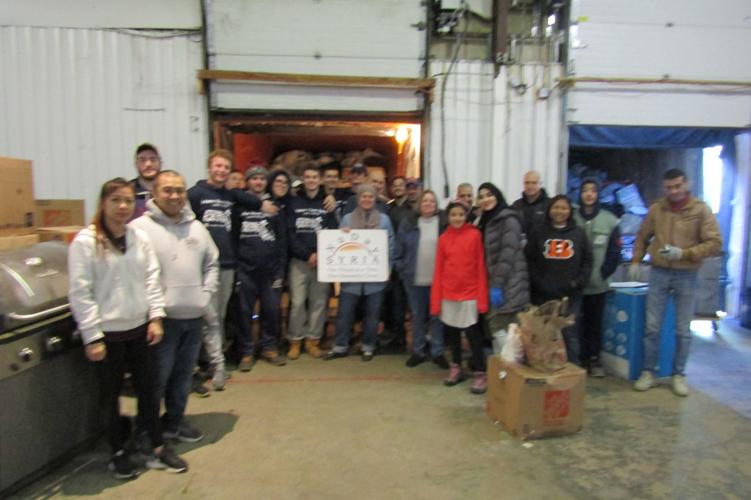 Lew Gordon from the Foxboro Rotary Club and Nadia Alawa, the founder and CEO of NuDay Syria, stand with volunteers, including the Merrimack College lacrosse team, in front of a cargo container packed with supplies that will be shipped to Syria. 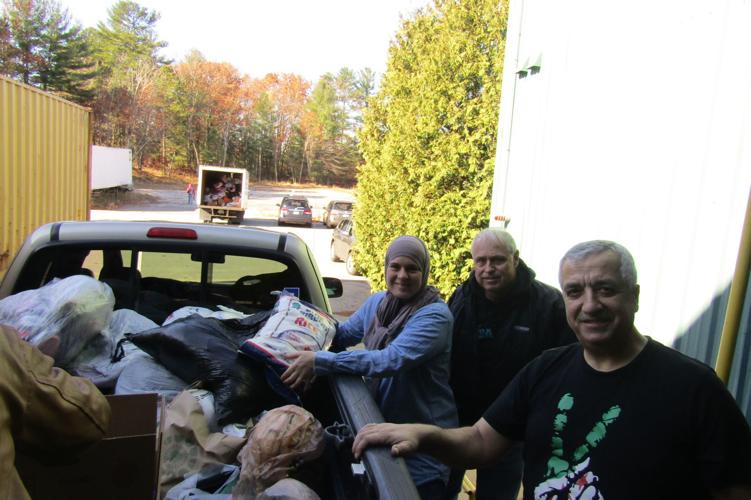 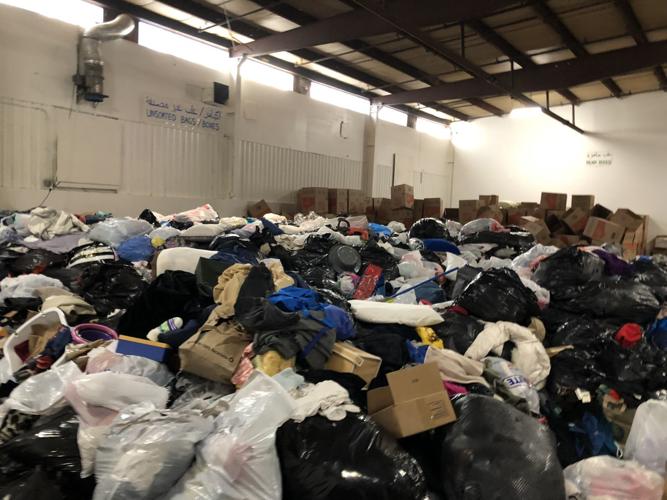 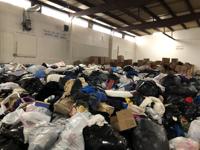 Donations collected for people in Syria at NuDay Syria in Derry, N.H. await sorting so they can be packed into a cargo container.

Lew Gordon from the Foxboro Rotary Club and Nadia Alawa, the founder and CEO of NuDay Syria, stand with volunteers, including the Merrimack College lacrosse team, in front of a cargo container packed with supplies that will be shipped to Syria.

Donations collected for people in Syria at NuDay Syria in Derry, N.H. await sorting so they can be packed into a cargo container.

In this giving season, large humanitarian donations collected by members of Hockomock Area YMCA Invensys Foxboro Branch were shipped off to Syria through the organization NuDay Syria, located in Derry, N.H.

“I am super surprised and amazed how many donations were collected from Foxboro,” said Nadia Alawa, the nonprofit’s founder and CEO. “This is amazing stuff, especially items for women, food, many things for children. (The items) are directly going to people in need in the northern part of Syria, and it’s so wonderful to know that your community cares so much. It really means a lot and we are very happy.”

On Nov. 11, donations were packed in a cargo container and shipped out of Boston Harbor to arrive in Syria 15 days later.

“This is our second year being a drop site for the donations,” said Patrick Murphy, executive director of Hockomock Area YMCA’s Invensys Foxboro Branch. “Our YMCA community rallied around the drive and after hearing Nadia speak last year about the good this does it was an easy decision to have the collection box here again.”

Murphy said members were extremely generous again this year and filled the box with goods and supplies daily during September and October.

“Members were more than happy to help and take part in it,” said Murphy, Alawa speak at a Foxboro Rotary meeting last summer.

He described Nadia as a very passionate individual whose ability to rally people, clubs and other organizations to take part in the cause is amazing and infectious.

“It was a privilege to meet her last year and thank her for the great work she is accomplishing,” Murphy said.

Jennifer Frank Bonnet, who is from The Netherlands and has lived in Foxboro for the past five years, donated clothes, shoes, toys and baby items to NuDay Syria at the Foxboro YMCA.

With a background in international relations and psychology, Bonnet has always been interested in traveling around the world to learn about other people and their cultures.

“I’ve always been passionate about people and causes that help others empower themselves. NuDay Syria touched me in general because of the amazing work they do and how many people they have assisted, and continue to reach,” Bonnet said.

She said the current war in Syria broke out three weeks before she planned to visit the country along with Lebanon.

“Often events happen and are catastrophic, but fade from the public eye, and people suffer indefinitely with no means to better their situation or provide hope for their children. Anything we could do to help is worthwhile. And donating locally requires little effort,” said Bonnet, who serves on the town’s advisory committee.

Brin Cox of Foxboro donated a car full of items. She said that when she looks around her home, family and community, she realizes how fortunate and lucky we are.

Jason Evans, a Foxboro Rotarian who came to help load the donation truck, brought some clothing and shoes to give.

“There are so many people out there that can use help and if you have an ability and time to do it then I feel like it’s the right thing to do,” Evans said.

“I hope these donations go a small way toward helping people in Syria with everything they are going through. We are glad to play a role in trying to improve their lives and give them some hope for a better future,” he added.

Nadia Alawa, who was born and raised in Denmark by her Syrian father and Danish mother, founded NuDay Syria in 2013 in response to the humanitarian catastrophe that was unfolding in the Middle East nation.

“Being a mother myself, I was kept awake at night with images of mothers crying over their hungry and hurt children, so I wanted to make a difference and do what I could for fellow women and also children in Syria,” Alawa said.

She did not initially plan to start up an organization. She spent a year doing all sorts of campaigns and fundraisers focused on women and children, using the logistics of established organizations and the network of aid workers inside Syria.

By winter of 2012, it had become clear that her passion was not going away and that she was meeting so many unnecessary obstacles while achieving excellent results from her work on the ground in Syria.

“Starting up a nonprofit that I could mold and form really started to make sense. My husband and many supporters who donated and volunteered for my efforts really encouraged me to start an organization of my own. Once I had decided to start my own organization and that it would ensure that we more easily and effectively could achieve our goals of focusing on empowerment and support rather than basic aid efforts, it was only a matter of days before NuDay Syria was founded and set up formally,” Alawa said.

NuDay Syria ships approximately 10 to 15 medical and 30 to 45 humanitarian aid cargo containers every year to the heart of Syria.

Patrick Neville, 18, a freshman at Merrimack College, was among volunteers who pack the cargo container along with his 12 lacrosse teammates. They wore matching shirt that read, “Mack gives back day of service.”

“One of our captains found out about NuDay Syria and he just brought all of us here and signed us up,” said Neville, who was overwhelmed to see a lot of donations.

“It’s a lot to take in. I can see now how much people in Syria need help and it makes me feel good knowing that I might be helping someone who really really needs it,” he said.

Lew Gordon, a Foxboro Rotarian, drove over one hour to bring a large donation on his Toyota pickup truck to Derry. He said he volunteered to drive and help because people in Syria have so little, need so much and don’t deserve what they are going through.

“I am amazed at the number of people (of all ages) that are here, children and adults all pitching in and working together,” he said.

Gordon not only witnessed the hard work of volunteers but met a 9-year-old girl named Sham who lost her mother, aunt and an older sister in an explosion in Syria.

Her grandmother saved her life by pulling her from the fire, but she still has severe burn marks on her left arm and a burn mark on her leg.

“My friends call it like a slime,” Sham said.

Gordon said Sham’s story left him with feelings of sympathy, amazement and hope.

“Hers is a terrible story for herself and her family — a tremendous loss of a mother, aunt, sibling, and personal injury in a violent way. (I’m amazed) at the way she has bounced back to become a bright and engaging child who looks forward to getting a good education and the future it can bring. And finally, (I have) hope that more of the world can find some of the same characters,” Gordon said.

Sham’s family fled to Lebanon first then came to the United States as a refugee in 2016. She now lives in Lowell. The family does not miss the container day to help people back home.

Mohamed Alsaied, Sham’s father, who makes it a point to volunteer on container day.

“When I help, I feel happy because I will maybe bring happiness with the things they need to live well in Syria. Because life in Syria now is so hard, everything is broken,” Alsaied said.

“When I see many volunteers in America helping people in Syria, I feel so happy and I feel maybe this will get a new day for Syria,” said the father, who lost his wife, her sister and his 9-year-old first daughter to war.

Alsaied is now remarried and his wife cooked delicious Syrian food for all the volunteers to show their deep appreciation.

“I think it’s a really good thing because they help other people. If this thing is not happening, then people in Syria won’t get a lot of food and won’t get help,” said Moustafa, who attended International School in Lebanon and learned English prior to coming to America.

He plans to be an engineer and help rebuild Syria.

NuDay Syria’a containers go to the area called Idlib and its countryside, as well as to some areas in the countryside of Aleppo. They have two warehouses and five offices in Idlib and all containers get unloaded into one of their warehouses, resorted and then arranged for distribution. NuDay staff handles the whole process.

“Of course, I met a lot of resistance to doing nonprofit work as a woman, and this mostly pushed me to become my own leader and made me even more determined,” Alawa said.

Not only Nuday Syria sends donations from America but has also started Future Generation Initiative, with four schools with 1,181 students in and around Asi in the northern part of Syria.

About 60 percent of all of their students are orphans who have lost either one or both parents to war. They live either with a surviving parent, grandparent, uncle, other extended family members or people that took them in from the street. The orphans in NuDay Syria’s care do not live in formal orphanages, of which there are very few, but come from very poor and dire home situations.

According to Alawa, NuDay Syria’s long-term goals are to focus more on empowerment and on education on all levels including of women with no male breadwinners and women who are otherwise abandoned.

“We are currently mostly focused on long-term efforts including psycho-social support and using container donations for projects, schools, training and building ties of diplomacy in addition to the basic and still much-needed function of emergency aid,” she said.

“We really do believe that all it takes to make a difference is for one person to step up and be that catalyst for change.”

NuDay is a 501c3 tax-deductible organization. Financial donations for shipping containers and schools in Syria are needed. All donations are tax-deductible. More details, visit NuDaysyria.org.

The donations from containers go directly to beneficiaries or to support their other projects, such as their medical clinics, housing units and livelihood opportunities.