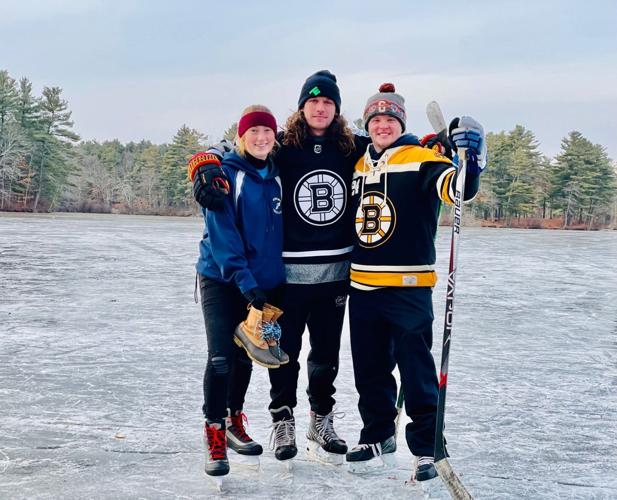 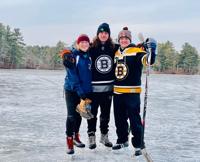 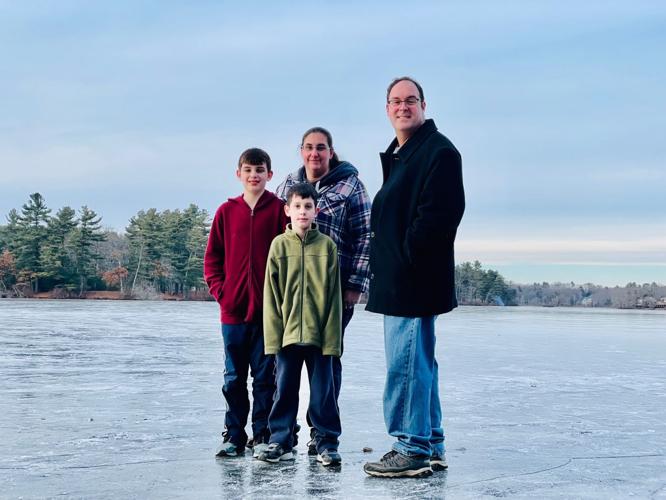 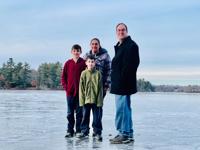 From left: Ethan, 10, Owen, 7, Joanne and Mark Newell at Neponset Reservoir on Sunday.

From left: Ethan, 10, Owen, 7, Joanne and Mark Newell at Neponset Reservoir on Sunday.

The recent freeze drew some residents to explore the Neponset Reservoir to test the ice over the weekend.

The parking lot of Kersey Point Conservation Area was full of people Sunday as they viewed and experimented walking on the frozen sections of the reservoir, a somewhat rare occasion, according to some locals.

Public safety officials, however, warn that people should watch treading on thin ice, despite that temperatures had dipped below freezing for a few days.

Mark and Joanne Newell were one of the families experiencing the winter activity with their children Ethan, 10, and Owen, 7, both Igo Elementary school students.

Mark said Sunday was the first time they came to the reservoir this year but have been there in the past, especially growing up.

"Because we saw some ice skaters down here. We wanted to check out the ice," Mark said.

The family lives about two miles away.

"When I was a kid I used to come here all the time. Skated, walked and slid, all that fun stuff," Mark said.

For his son Ethan, this was his first time standing on a frozen reservoir.

Ethan said: "It is neat. I am scared and excited."

Foxboro 2017 high school graduates and residents Rachel Freeman and John Brolin, and their friend Ryan McCormick of Mansfield, were among others trying to play ice hockey.

They were in full gear for the game.

"I live on the street. It's just a matter of waiting for it to freeze every year. It's the best part of the year," Freeman said.

She said this is her favorite place to be. She did not grow up playing hockey, but enjoys winging it for fun.

Freeman said since the reservoir rarely ices over, "you know you wait for it all year. And then finally you get the text from one of your friends. Like it's frozen solid. Get your skates going out."

"I'm turning 23 this month, so I have played probably ever since I could walk," Brolin said. He said the difference between a regular ice skate rink and a frozen reservoir is a more open area.

"When you're on a rink, you only have a certain set amount of area to skate on. But for this, however big the actual lake (reservoir) could be, that's how much you could skate, but they are absolutely awesome."

But since a reservoir is running water, the ice may not be consistently thick, making for a potentially dangerous situation should someone break through and fall into the frigid water.

"My concern about the reservoir specifically is that there are areas where water comes in and goes out and the moving water can result in thinner ice or open water," Fire Chief Michael Kelleher said via email. "The area where this is most visible is the dam that flows into Crackrock pond by the Lane Property. Another concern I have is there are areas of the reservoir where there are stumps and fallen trees, there could be thin ice or open water where protruding debris exists."

"You'd have to do your own due diligence and we recommend not going on ice. If you do have to go on the ice, we always suggest you have somebody else with you so you're not alone. The only truly safe ice to skate on is at a rink," Puntini said.

The department trains annually for surface ice rescues and has the equipment on various apparatus in the event is needed, but that people should avoid putting themselves at risk.