Bass Pro Shops at Patriot Place in Foxboro is one location where children can visit Santa Claus this year during the coronavirus pandemic. Above: Santa wears a plastic face shield while greeting a youngster behind a piece of Plexiglass. Below: Linda Boynton of Wrentham wipes down and sanitizes a piece of plexiglass that separates visiting families and Santa. The area gets a full wipedown between visits. 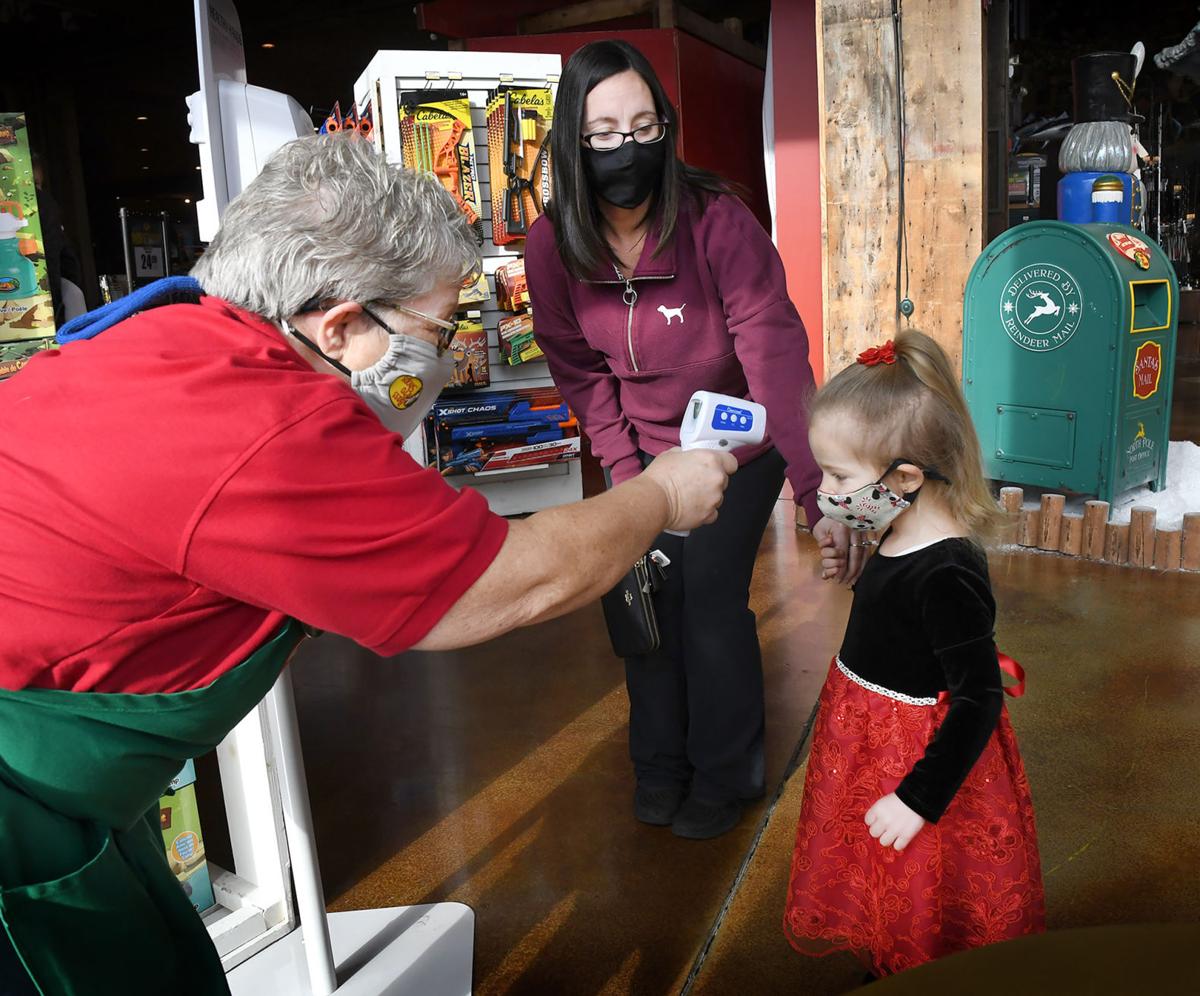 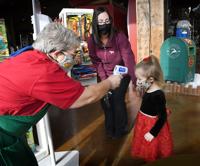 Bass Pro Shops employee Pam Medeiros, of Foxboro, checks the temperature of Laila Morse, 3, of Middleboro, before her visit with Santa. Samantha Morse, Laila’s mom, is behind her. 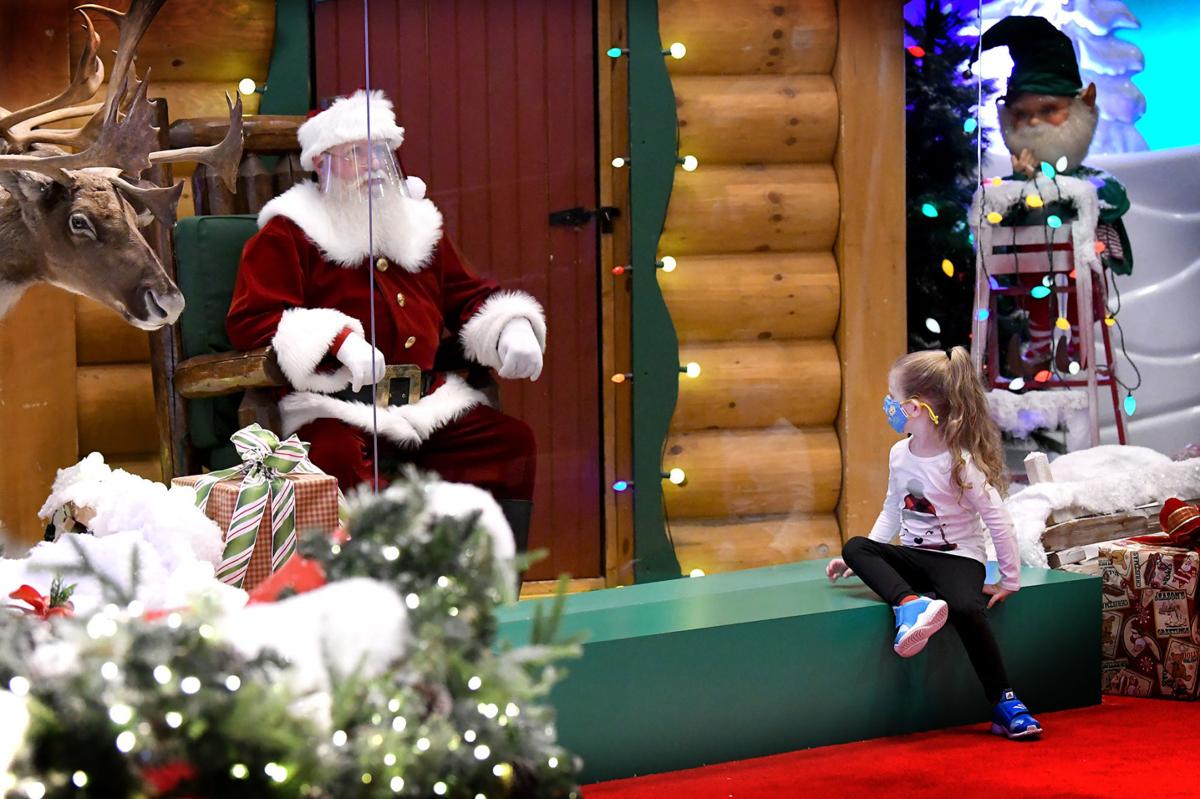 Santa greets a youngster behind a piece of Plexiglass and a plastic face shield at Bass Pro Shops at Patriot Place in Foxboro.

Bass Pro Shops at Patriot Place in Foxboro is one location where children can visit Santa Claus this year during the coronavirus pandemic. Above: Santa wears a plastic face shield while greeting a youngster behind a piece of Plexiglass. Below: Linda Boynton of Wrentham wipes down and sanitizes a piece of plexiglass that separates visiting families and Santa. The area gets a full wipedown between visits.

Bass Pro Shops employee Pam Medeiros, of Foxboro, checks the temperature of Laila Morse, 3, of Middleboro, before her visit with Santa. Samantha Morse, Laila’s mom, is behind her.

Santa greets a youngster behind a piece of Plexiglass and a plastic face shield at Bass Pro Shops at Patriot Place in Foxboro.

First, Kris (actor Edmund Gwenn) angers a harried mom when he tells her son that of course he’ll get the fire engine he wants. When Mom, who’s been waiting in line on her aching feet, testily informs Kris that the toy can’t be found, he pulls out a little black book and reveals they’re indeed for sale — at a bargain price, no less — at a competing store. “I keep track of the toy market pretty closely. Does that surprise you so?” he asks her.

But it’s the second wish that really surprises.

A woman approaches Kris with a shy little girl in tow. She hesitantly explains that the child is a war orphan (whose parents apparently were killed in the Nazi bombing of Rotterdam, seven years before) and speaks no English. But she saw Kris in the Thanksgiving Day parade and “she said you were ‘Sinterklaas’, as she calls you, and you could talk to her. I didn’t know what to do,” the woman says. Kris smiles, takes the girl on his lap and begins to chat with her — in fluent Dutch. She breaks into a gap-toothed smile. ”Ik wist dat u het zou begrijpen!” (“I knew for sure you would understand!”) she says.

So a visit with Santa can not only help boost the toy industry, it can help heal the scars of a world war?

Maybe this year it can help ease us over a pandemic, too.

The real Macy’s flagship location on New York’s 34th Street, along with other retailers, may have canceled in-person visits with Santa — or Santa’s helpers, as they are sometimes known — this year. After all, a queue of young children and moms and dads and guardians in a crowded department store is the very opposite of social distancing.

A recent story in The Washington Post noted that Santa visits are expected to decline about 65 percent from last year, when more than 10 million families took their children to pose for pictures at malls and stores, according to GlobalData Retail. The majority of those people also spent money at nearby shops and restaurants during their visit, the firm said.

Venues that offer encounters with the jolly old elf are doing them as drive-thru or online only and, at one mall in Richmond, Va., Santa will be ensconced in a giant snow globe.

But not all merchants have abandoned the notion that a brief chat with Santa Claus and a chance for a keepsake photo is both in the spirit of the season and an important chance to boost desperately needed holiday sales in a year when some are predicting flat or minimal growth in Christmas spending.

Locally, Bass Pro Shops at Patriot Place in Foxboro and Emerald Square in North Attleboro are among those welcoming their own versions of Santa this year — keeping pandemic restrictions in mind.

But they will all look very different from encounters in years past.

Emerald Square, for example, wasn’t planning to have Santa available for visits until the day after Thanksgiving. The mall, which recently was placed in receivership over mortgage payments, has been bereft of seasonal cheer up to now. (Holiday decorations, which used to go up around Halloween, are apparently still in storage, a recent visit to the site revealed.)

A sign on the site for Santa’s throne outside Sears on the mall’s lower level, thanks patrons for their patience.

At Bass Pro Shops, an outdoor retail chain mostly known for hunting, camping and fishing gear, has re-imagined Santa’s workshop for the pandemic era and — at its Patriot Place site anyway — parents, kids and Santa himself are more than jolly about it.

Ed Cuthbertson, 53, the general manager, has been at the retailer’s Foxboro location for six years.

“It is great for us because any event is about the experience for the children. We want to make sure it’s a good time,” he said recently as the store began welcoming visitors to Santa’s Wonderland for extended hours, 10 a.m. to 8 p.m. through Christmas Eve.

Visits are by appointment and customers get a temperature screening before they get in line. Families are separated by decals on the floor and, to keep things orderly, there’s a PVC pipe and black cloth drape separating the line from the rest of the store.

Pam Medeiros, 60, of Foxboro, was in charge of screening the families as they entered one recent morning.

“People are so happy we are doing what we are doing and we are being safe,” she said. “They are happy that we are having a little normal in our lives right now.”

Medeiros, a seasonal employee, worked at Santa’s Wonderland last year as well. “It’s the same, but different. The kids still get to see Santa and talk to Santa, so it’s all good.”

At Bass Pro Shops, Santa’s Wonderland has a distinctly outdoorsy vibe, with Santa sitting in front of a log cabin, framed by decorated evergreen trees and behind a tall, transparent barrier, and with a few examples of the taxidermists’ skill staged artfully around him.

(They may be whitetails instead of reindeer, but it’s not likely his youngest visitors take note.)

Youngsters can tell Santa what they want and then sit in front of the Plexiglass shield for a photo, while Santa smiles behind them.

The big challenge is getting preschoolers to sit still long enough when they can’t be held firmly by a gentle but determined Santa.

Santa’s elves, who double as photo staff, then make sure everything is sanitized for the next visitors.

On a break between chatting with some children about what they wanted for gifts, Bass Pro’s Santa said the biggest change is “Obviously we are not able to get close to the children. And it’s a little hard to hear, although this young lady has told me what she wants,” he said, bidding goodbye to a little girl whose main complaint, clearly expressed, was about her infant brother. (“He’s just a baby, so he doesn’t know.”)

Santa, who, in his non-Wonderland hours, is Scott Martin, 45, of Burrillville, R.I., and whose father and uncle are also “full-beard Santas” has been portraying old St. Nick for eight years in an elegant red velvet and fur-trimmed suit, including time at Bass Pro Shops.

“We’re making sure everybody is safe,” he said, but “it’s taken a bit of getting used to.”

Children, and their parents, did not seem to care that things looked so different this year.

Niki Anello of Westwood was back with her son Charlie, 2, for their second visit in two years. Charlie, an active boy, was excited to see Santa and didn’t seem to care about the limits and restrictions.

“I’m just happy they are still doing it for the kids,” Anello said, “He’s just happy to be out doing something, to see a normal activity for him.”

Charlie, by the way, had a distinctly old school gift list — a dump truck.

Parent after parent, often with multiple kids and even pets along with them, said they were just grateful to be able to recapture a bit of tradition in a holiday season that seems so curtailed.

Some were even making a day of it. Jessica Crooker and her daughter Katalina, 2, were there with Crooker’s sister, Joanne Brine and her son Benjamin, 3. They came from Duxbury for the Wonderland experience.

“This is great,” she said, “We are really excited to see Santa and still be safe.”

Cuthbertson, the store’s manager, said parents appreciated the fact that “with the seclusion of the pipe and drape it’s a better experience for them, because the crowd is not around everybody.”

The restrictions haven’t slowed the crowds. Cuthbertson said they were snapping about a picture a minute during peak hours.

That kind of demand has been reflected in activity nationwide, Bass Pro says. The chain reported that 95,000 families stopped in for photos during Santa’s first week at 176 stores.

As for Santa himself? Not to worry. No less an authority than Dr. Anthony Fauci has reassured the nation that Santa is immune to the virus.

Why? Because he’s Santa.