You have permission to edit this article.
Edit
News
Sports
Opinion
Obituaries
Classifieds
Subscribe
Share This
1 of 6 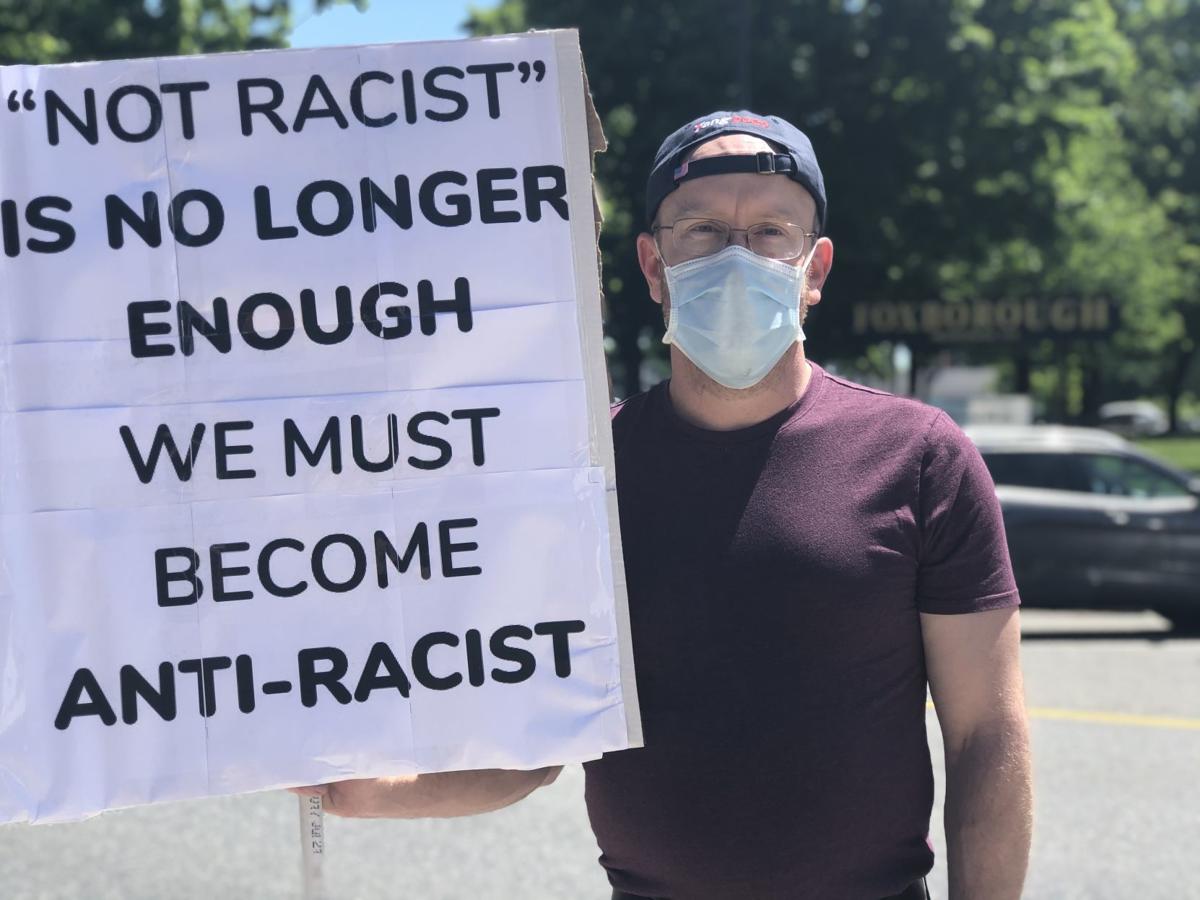 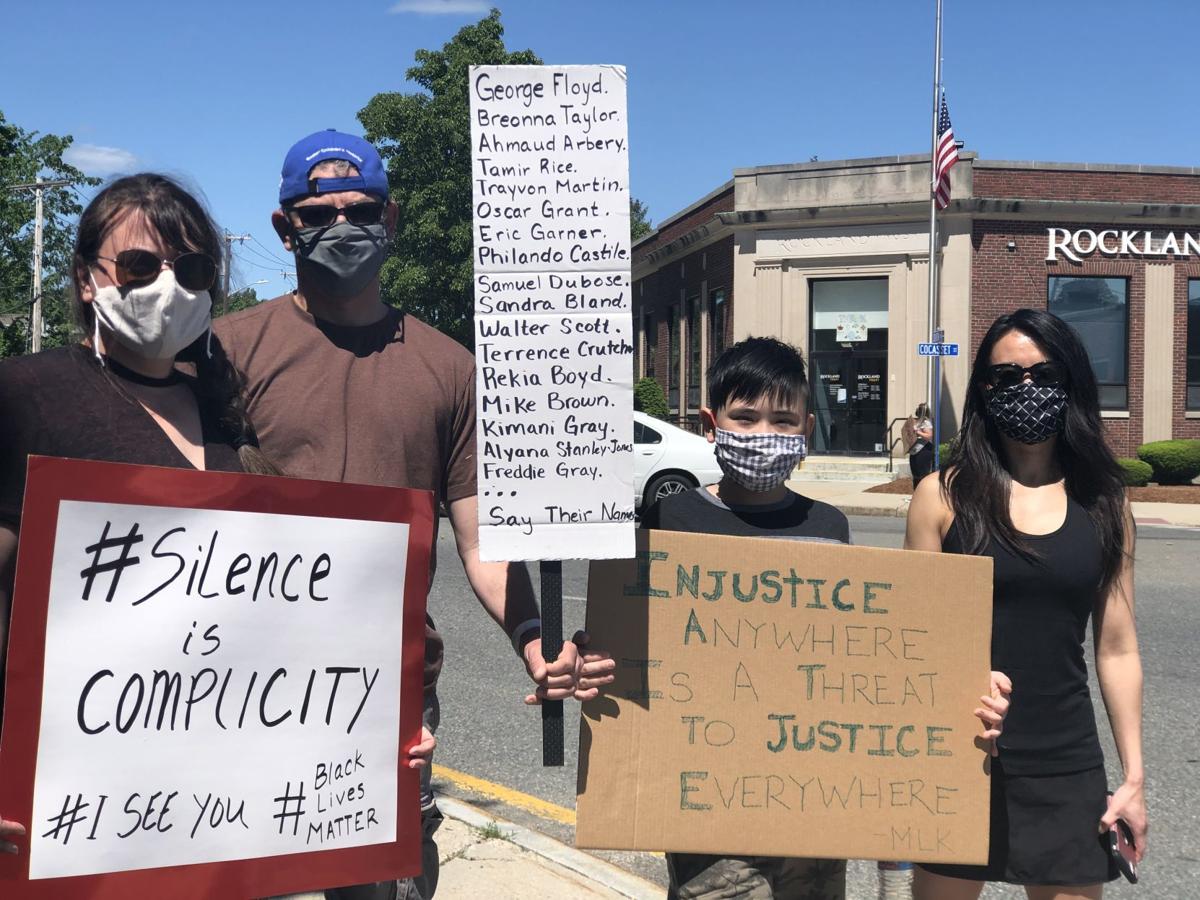 From left: Kristen and Scott Nicholson, Denise Hui and her son Cayden Hui-Derouin, 13, show their support for social justice at the event on Foxboro Common on Sunday. 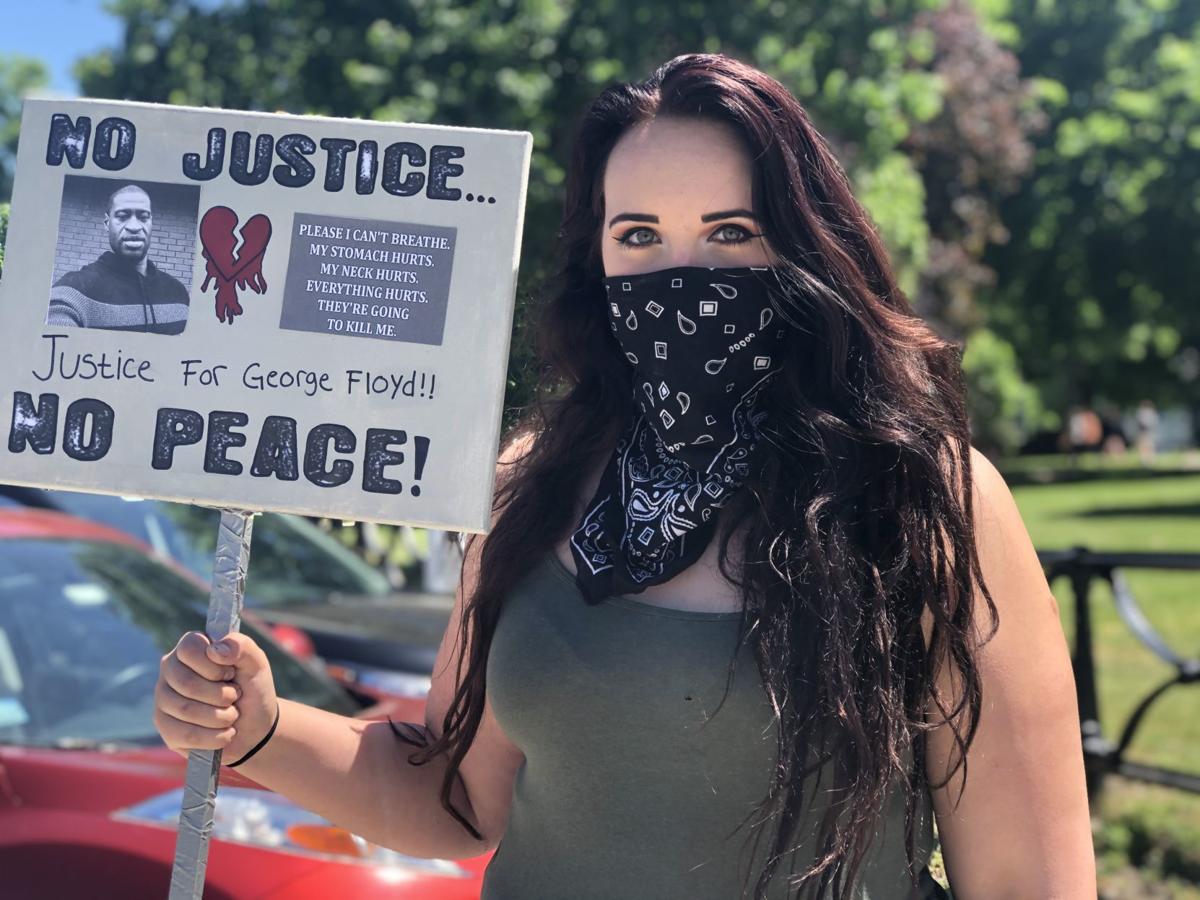 Foxboro resident Avalon Winget, 20, was one of about 100 people to participate in the event on Foxboro's common Sunday. 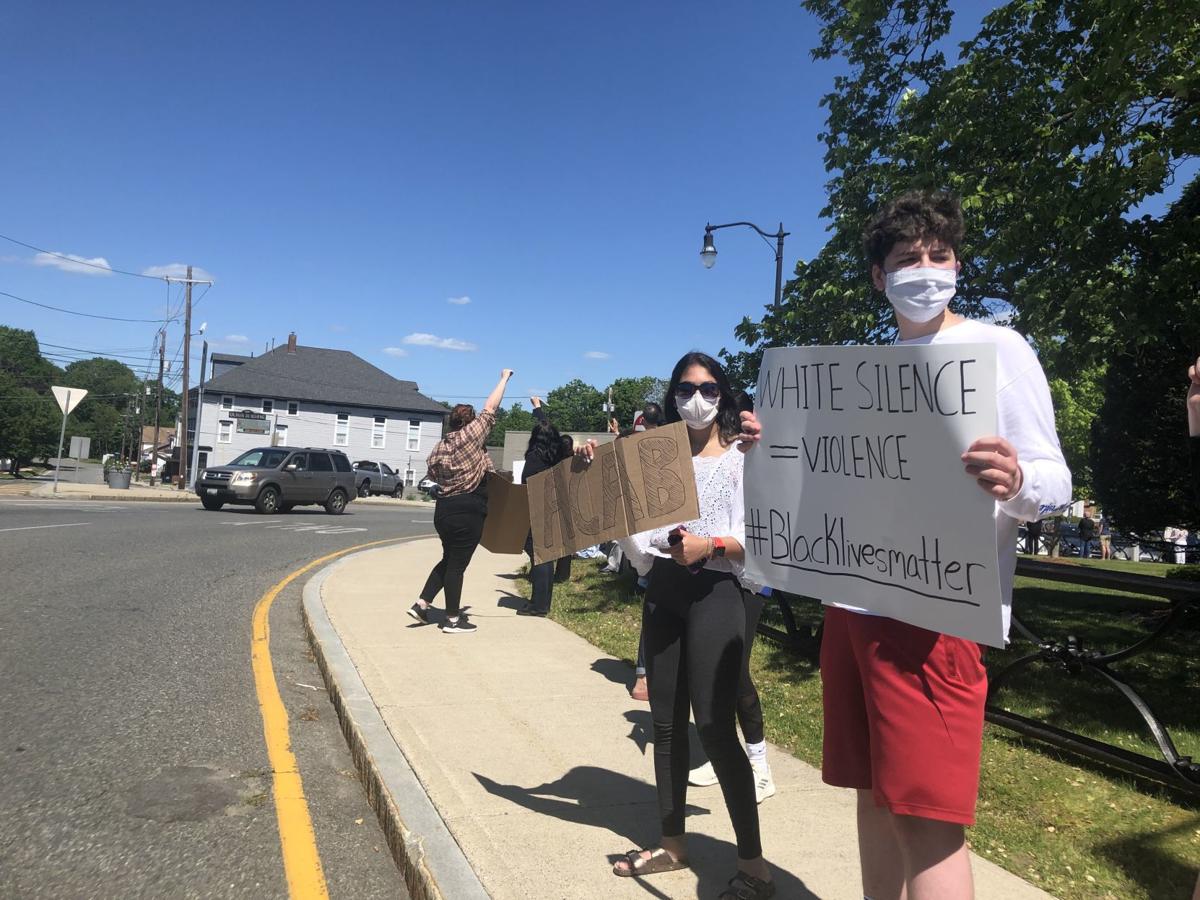 People circle the Foxboro Common during a stand-out for social justice Sunday following the death of George Floyd in Minn. last week. 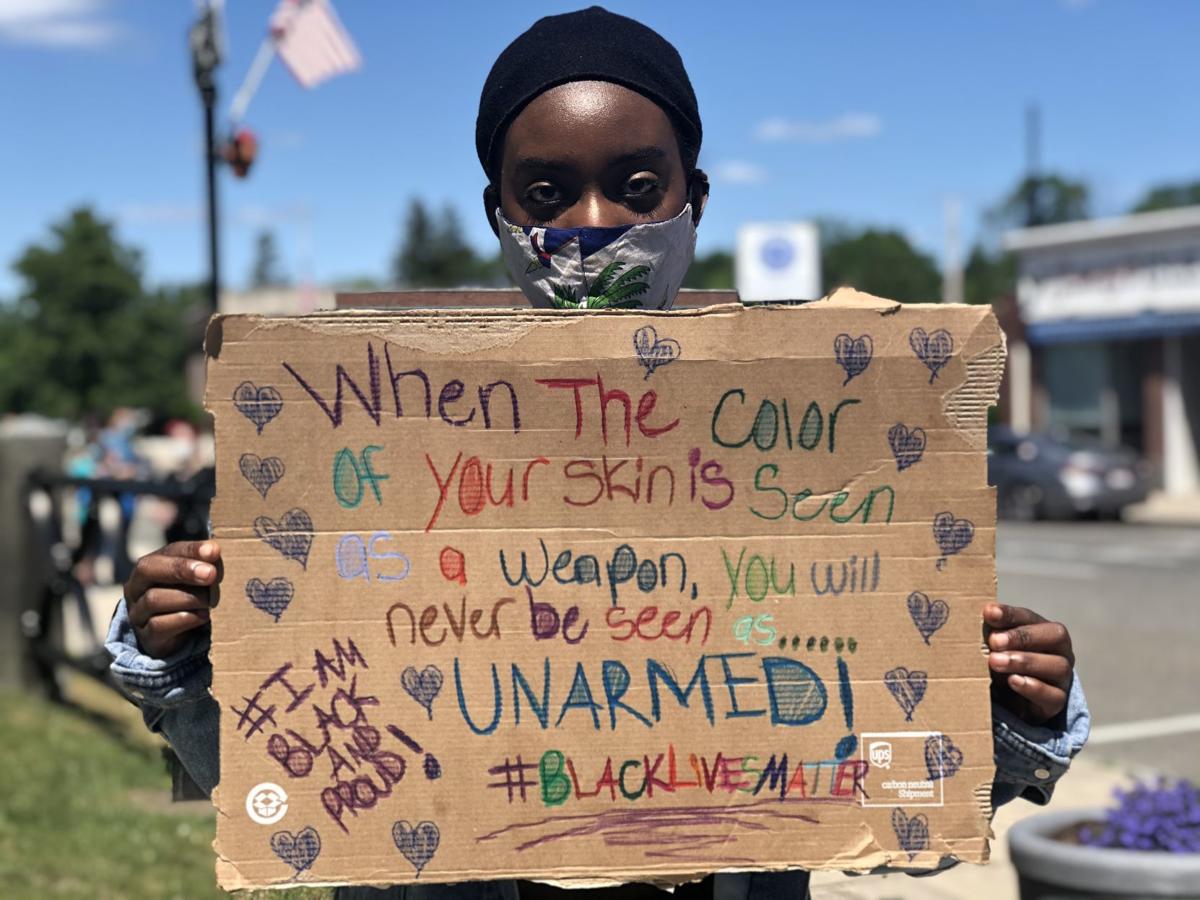 Renee Leatherwood, 16, a Foxboro High School student, participates in the Foxboro Stand-Out for George Floyd and Social Justice on Sunday at the Foxboro Common. 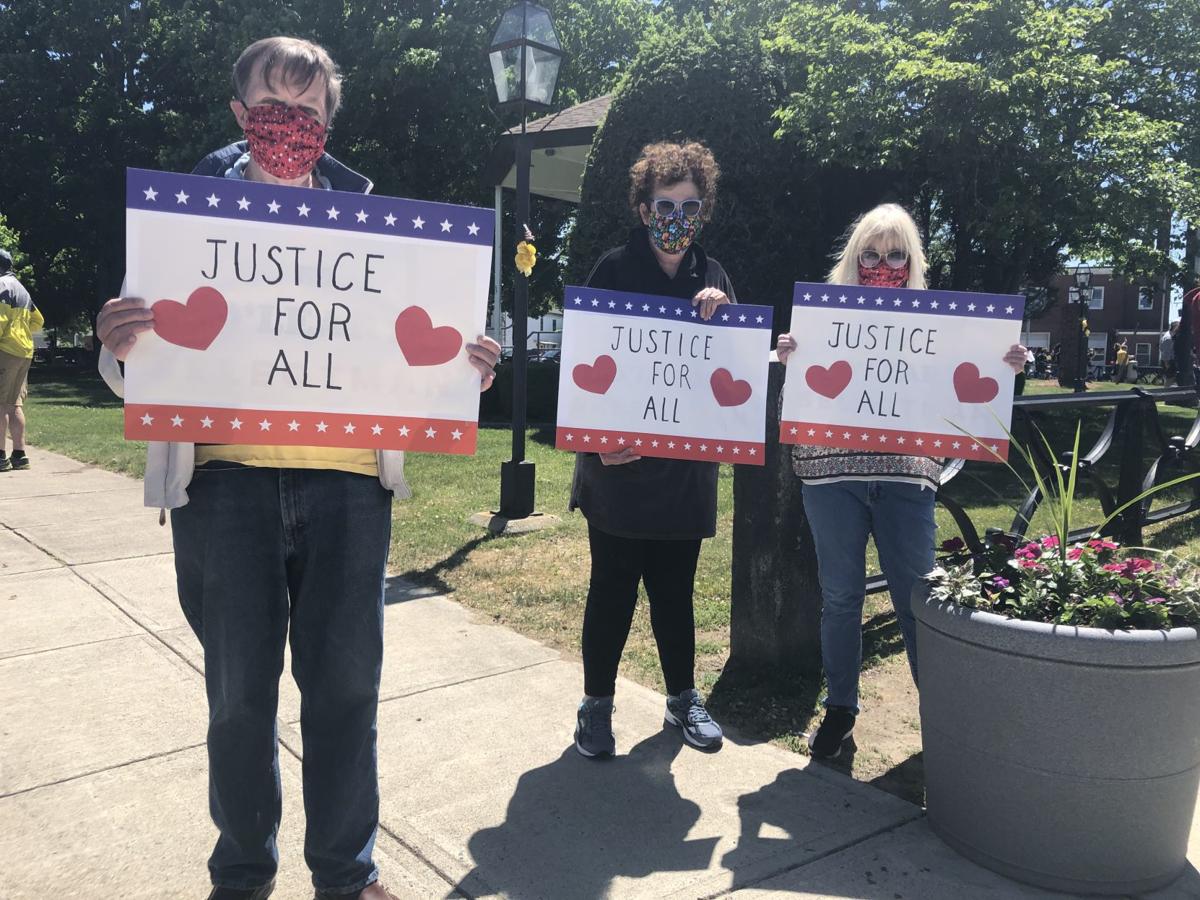 From left: Kristen and Scott Nicholson, Denise Hui and her son Cayden Hui-Derouin, 13, show their support for social justice at the event on Foxboro Common on Sunday.

Foxboro resident Avalon Winget, 20, was one of about 100 people to participate in the event on Foxboro's common Sunday.

People circle the Foxboro Common during a stand-out for social justice Sunday following the death of George Floyd in Minn. last week.

Renee Leatherwood, 16, a Foxboro High School student, participates in the Foxboro Stand-Out for George Floyd and Social Justice on Sunday at the Foxboro Common.

More than 100 people gathered around Foxboro Common Sunday in protest of the actions taken by police officers involved in the death of a black Minnesota man in their custody in a case that has led to demonstrations around the world.

Foxboro resident Charlie Woods, May Vuolo, and two others organized the Foxboro Stand-Out for George Floyd and Social Justice on Sunday afternoon. Floyd died after being pinned under the knee of a white Minneapolis police officer on Memorial Day.

Those is attendance held handmade signs proclaiming “No Justice, No Peace,” and “Silence is Complicity,” among other statements against social and racial injustice.

People were asked to observe social distancing measures during the stand out.

“I can’t even believe the turnout. When I looked at the Facebook event page, it said 45 going, 102 interested, it looks like we have over 100 people here so I am kind of blown away and by the signs that people made,” Woods said. “To be honest, that some people have the perception that in suburbs we are not going to come out and sit quiet in our homes, so it’s really nice to see people willing to come out and stand-out for the cause against racial injustice.”

Woods said part of being a Unitarian Universalist means working for peace and justice in the world.

“As I was watching the events unfold over the past week, I was looking for a way to respond. I saw a similar event in Bridgewater and thought that it would be great to create a similar event for our town,” he said.

“I would like to raise awareness for other people that we can’t just be on the sidelines. Ending racism will require a positive effort on our part,” Woods said.

The organizers did the planning starting on Friday afternoon and shared the event on Facebook.

“When you plan an event like this, you’re never sure what the response will be,” Woods said.

Current selectman Ed O’Leary, who is the town’s former police chief, his wife Claudia O’Leary and her sister Judy Leahy made signs “Justice for All” and stood out with other protesters at the Town Common.

“My wife saw this event posted on Facebook and as a result, we thought it was a good idea to come up and to show support for the rule of law that we have in our country,” O’Leary said. “As our sign says, justice is for all. We thought it was important to show people that’s what the community respects.”

He said the turnout for the last-minute event showed that Foxboro is a community in which people are willing to speak up for others.

Foxboro resident Avalon Winget, 20, carried a sign stating “No Justice...No Peace. Justice for George Floyd,” and added Floyd’s picture and comments that he made caught on phone video as an officer held a knee on his throat: “Please I can’t breathe. My stomach hurts. My neck hurts. Everything hurts. They’re going to kill me.”

Winget said, “If they are not going to do anything about it no one will have peace of mind. What kind of world would it be to live in if no one is treated equally?”

Tracey and her daughter Jackie O’Farrell of Walpole heard about the event from her friend in Foxboro and came to participate.

“My daughter and I, unfortunately, feel very strongly that things aren’t going to change until white people get outraged and show it’s time to change. Because black people have been trying to change things forever and nothing has changed, so we have to stand up and stand with black people,” Tracey O’Farrell said.

Her daughter, 15, who helped to make the sign “Justice for Floyd, we stand with you,” said she came because she thought it was very important to bond together to create change.

“It’s sad and scary what’s happening in the world,” she said.

Kristen and Scott Nicholson said they turned out to the event because they said as white parents they don’t worry about their son going out for a bike ride around town.

“We are here for the parents whose kids haven’t come back home,” said Kristen, who felt this was the least she could do to show support.

“I just want to show my support that black lives do matter and this is the least I can do,” her husband said.

Denise Hui attended with her son Cayden Hui-Derouin, 13, who is a Ahern Middle School student.

“We should all be standing and be protesting this,” Denise said.

Cayden said he was there because, “Stuff like this shouldn’t happen. It needs to be protested.”

Foxboro High School student Renee Leatherwood, 16, participated because “I feel people deserve a voice. Today is the day to speak up about it.”