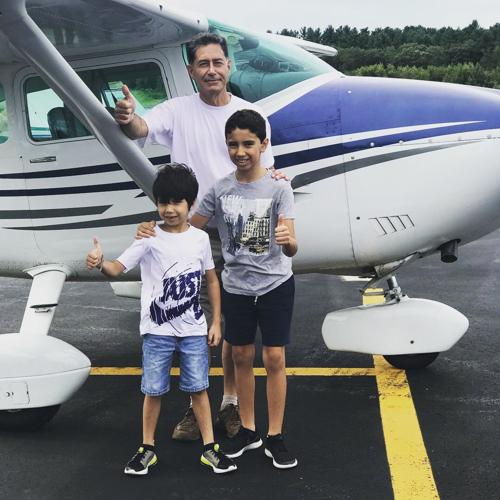 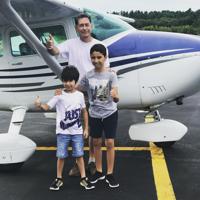 EAA Volunteer Pilot Fred Moses poses with Ilyas Taj, a first grader at Foxboro Regional Charter School, and his brother Adam, a fourth grader, in front of the plane before their flight. 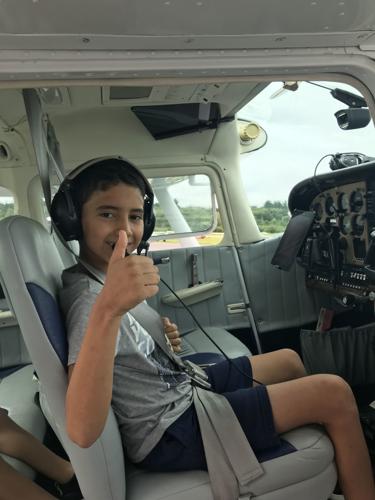 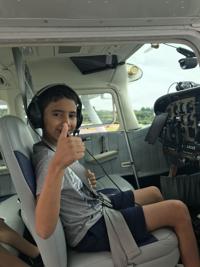 Adam Taj, a fourth grader at Foxboro Regional Charter School, gets a front row seat during his flight lesson at the Young Eagles program in Stow.

EAA Volunteer Pilot Fred Moses poses with Ilyas Taj, a first grader at Foxboro Regional Charter School, and his brother Adam, a fourth grader, in front of the plane before their flight.

Adam Taj, a fourth grader at Foxboro Regional Charter School, gets a front row seat during his flight lesson at the Young Eagles program in Stow.

As airlines forecast a serious pilot shortage in the coming years, aviation organizations are scrambling to generate interest in flying in younger generations.

Luckily for the Young Eagles Chapter 196 in Stow, the idea has taken flight in children of Foxboro.

Adam Taj, 10, a fourth grader at Foxboro Regional Charter School, experienced his first flight in a four-seat Cessna with pilot Fred Moses in the Young Eagles program on Sept. 8.

“Pilot Fred taught us a lot. I was surprised because I never saw the ground. The houses and cars looked like small toys,” he said.

Taj, who went on the plane ride with his brother Ilyas, a first grader at the charter school, now hopes to become a pilot.

And that’s exactly what the organizers of the Young Eagles program were hoping.

According to Andy Goldstein, the program coordinator for the past nine years, the Young Eagles is a worldwide program run by the Experimental Aircraft Association to introduce young people to flight by giving them free airplane rides.

The program was started in 1992, with the goal of flying 1 million kids by December 2003, the 100th anniversary of the Wright brothers’ first flight. The EAA met that goal and has continued the program. To date, EAA members have flown over 2.1 million kids free of charge.

Each year, Chapter 196 flies an average of 200 kids between the ages of 8-17, with approximately 20 volunteer pilots donating their time.

“I would do it again if I can. It was amazing,” he said. “I loved being on the airplane. It was really fun up there.”

Loebelenz learned during the flight that pilots have to communicate with each other in order to figure out when they can take off and make sure they don’t fly too close to another plane.

However, his older sister Maria, a seventh grader at Ahern, was not as convinced.

“I want to be a state game warden,” she said. “But maybe when I retire I can be a pilot.”

Their mother Lynda said the program was very organized and well done.

“The pilots get right out there with the kids, show them everything they need to see on the plane and make sure it’s good to go,” she said. “They loved it. They really appreciated to learn about the plane and (it) was a great experience for them. It gave them an opportunity to see if there is something they want to do when they get older.”

Goldstein said for many, it is the experience of a lifetime.

“Not only do they get a ride in a small airplane with spectacular views, but those that fly in the front seat get a chance to fly the airplane themselves,” he said.

Young aspiring pilots receive a certificate signed by the pilot with the aircraft type, date and location of their flight, along with a logbook with an entry describing the flight. The logbook includes a registration code that customers can use to register for an EAA student membership online. Membership is free until the age of 19. They are also able to enroll in Sporty’s Online Ground School, free to Young Eagle participants.

The school is a web-based version of the classroom training that is required to get a pilot’s license. Once a Young Eagle has completed the first three units of ground school, the EAA sends them a voucher good for a one-hour flight training course at any flight school. Additionally, if the Young Eagle takes and passes the EAA private pilot’s written exam, EAA will reimburse the testing fee.

“We’re planting a seed and taking the long view. We certainly don’t expect 8- or 9-year-olds to go directly into flight training. But the Young Eagles experience will stay with them. For some, it may turn out to just have been a fun airplane ride and no more. But there are some for whom the first ride will spark a genuine interest in aviation. They will come back, sooner or later, and we can help them develop that interest,” Goldstein said.