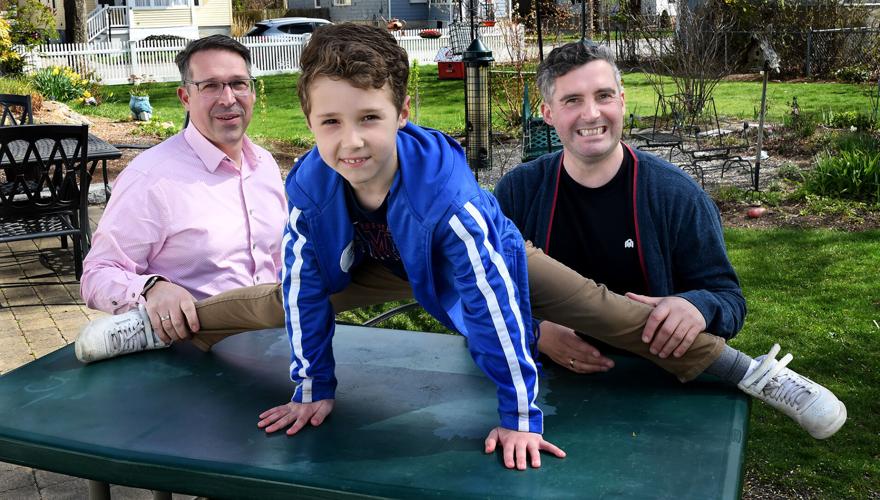 Tristan Morley, 7, will be attending camp this summer in his hometown of Foxboro. His father, Bob, left, and his husband Sebastian Morley, have been looking forward to sending their son to camp post-pandemic. 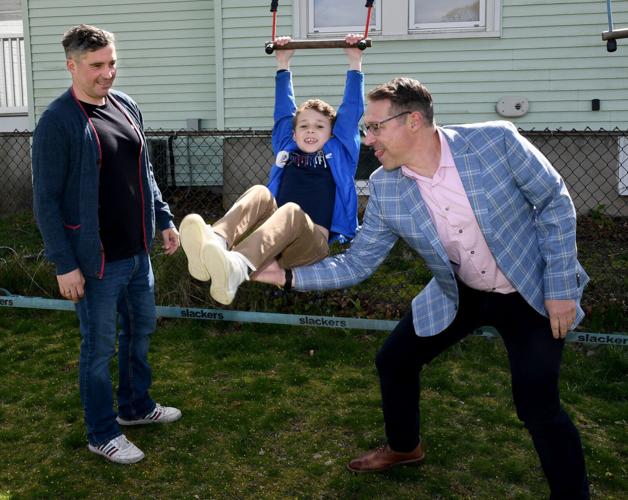 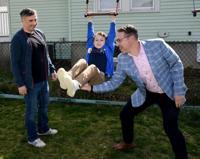 Tristan Morley, 7, will be attending camp this summer in his hometown of Foxboro. His father, Bob, right, and his husband, Sebastian Morley, have been looking forward to sending their son to camp post-pandemic.

Tristan Morley, 7, will be attending camp this summer in his hometown of Foxboro. His father, Bob, left, and his husband Sebastian Morley, have been looking forward to sending their son to camp post-pandemic.

Tristan Morley, 7, will be attending camp this summer in his hometown of Foxboro. His father, Bob, right, and his husband, Sebastian Morley, have been looking forward to sending their son to camp post-pandemic.

Bob Morley of Foxboro appreciates summer camp. Not for himself, but for his 7-year-old son, Tristan.

“He is shy at the best of times and the pandemic only intensified his apprehension to meet and open up to new people,” Morley said. “This did play a large part in our choice to send our son to camp. And we are glad we did; he came home every day last summer happy and with a new story.”

Morley and his husband Sebastian, whose son will be attending Oak Hill Country Day Camp in Foxboro this summer, aren’t alone. During the pandemic, daily life, its schedules and routines were thrown a curveball as society adapted to a new way of living. But as restrictions are lifting and kids finish up another COVID-impacted school year, many parents are turning toward summer camps as a way to provide a sense of pre-pandemic normalcy, causing a huge demand for the seasonal tradition.

“I think, in general, summer camp is a huge draw every summer. Kids are out of school and parents are looking for something fun for their kids, especially with the past two years being tough on everyone, and I think parents are looking forward to getting their kids back to a normal schedule,” Lauren Lastrina, director of Camp Ramsbottom in Rehoboth, said.

Heather Daly of Foxboro, who will be sending her girls, Rosalie, 8, and Lillian, 5, to camp this year at Elite Dance Center and the Foxboro Recreation Booth Camp, is among those parents.

“I signed them up so that they would have some structure in their day throughout the summer, so that they could be with peers, get out of the house and not be bored,” she said.

Many camps were closed during the summer of 2020, then saw an increase last year of more applicants but had to turn some people away due to capacity restrictions. This year, more people than ever are signing up for camp and applying early to secure a spot for their child.

“I would tell you if you were a parent hoping to register your child at Camp Finberg this year to do it sooner rather than later,” Courtney Harrness, CEO of Attleboro/Norton YMCA Camp Finberg, said. “We are almost double of where we were on the same day last year in terms of registration. If you’re looking for your child to have this experience this summer, now is the time to get it done.”

Michele Rowcliffe, executive director of American Camp Association New England, said that the camp industry is recovering after the summer of 2020 put many programs on hold.

“While only a small percentage of camps were given the green light to open in 2020, the vast majority of camps in New England opened successfully in 2021 with intentional, reduced capacities,” she said. “What we are now hearing is that camps are trending back towards 2019 enrollment numbers, with many camps having increased capacities and wait lists.”

The demand for summer camp appears to echo the challenges left in the wake of the pandemic.

In response to the pandemic’s impact on child and adolescent mental health, Rowcliffe said she’s seen more camps shifting to focus on the needs of both campers and staff, allocating greater resources to facilitate these conversations throughout the summer.

Harrness at Camp Finberg also reflected on the pandemic’s impact on children, and how that also may be a driving force for the number of applicants.

“I think that speaks a great deal to a number of factors,” he said. “One being children’s need for socialization, we also noticed a rise in children’s emotional and behavioral issues following the pandemic. I’m really proud to say that one thing we do at Camp Finberg and Norton Outdoors Center is that we have inclusion specialists and adjusters at camp full time to be able to provide one-on-one individual care for young people who are showing some of those signs.”

And while the pandemic left people of all ages with more time on their hands, some of them who picked up a new hobby, like music or art, are continuing to see it through.

Dave Lasalle, owner of The School of Rock in Attleboro, says he has seen changes in the number of students interested in practicing their musical skills.

“During the lockdowns, people had the chance to learn things musically, picking up the guitar again, or the piano,” he said. “This became an activity people began using in the shutdowns as activities were restricted. Then post-COVID, now a lot of people just want to continue that activity and do it in a more structured, meaningful way.”