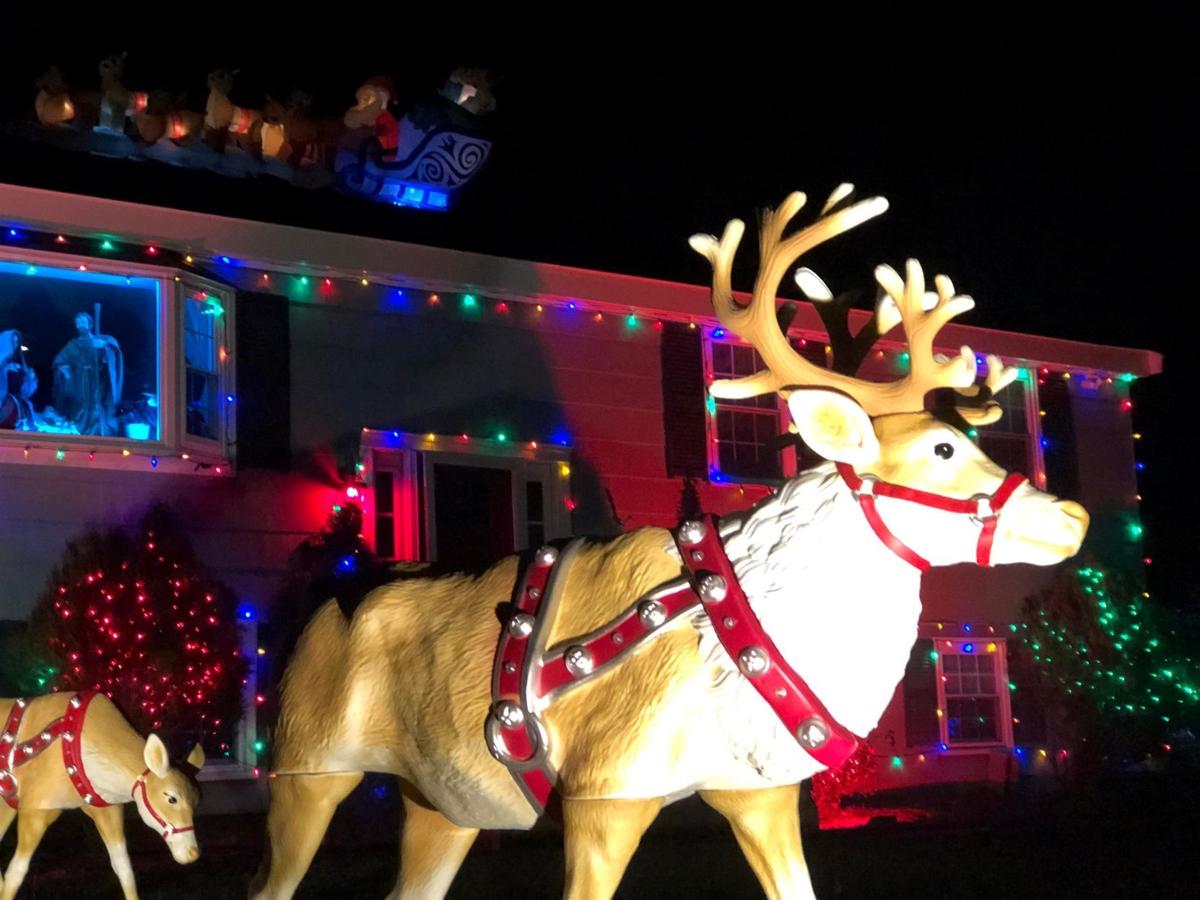 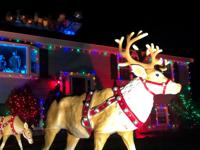 This display at the Fiumara family home on Samson Road won the “Over the Rainbow” Award.. 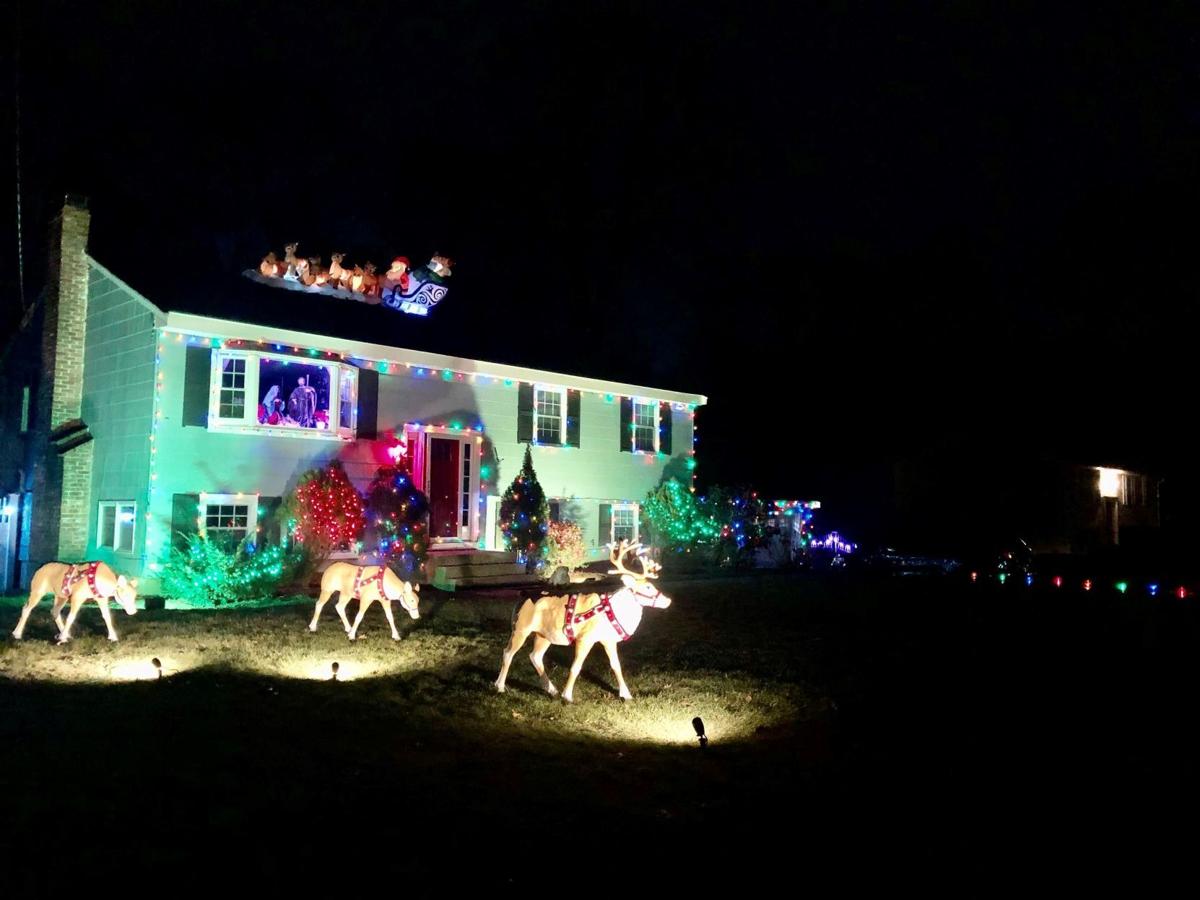 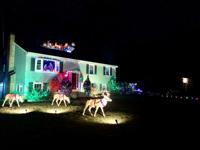 A Christmas scene on Samson Road. 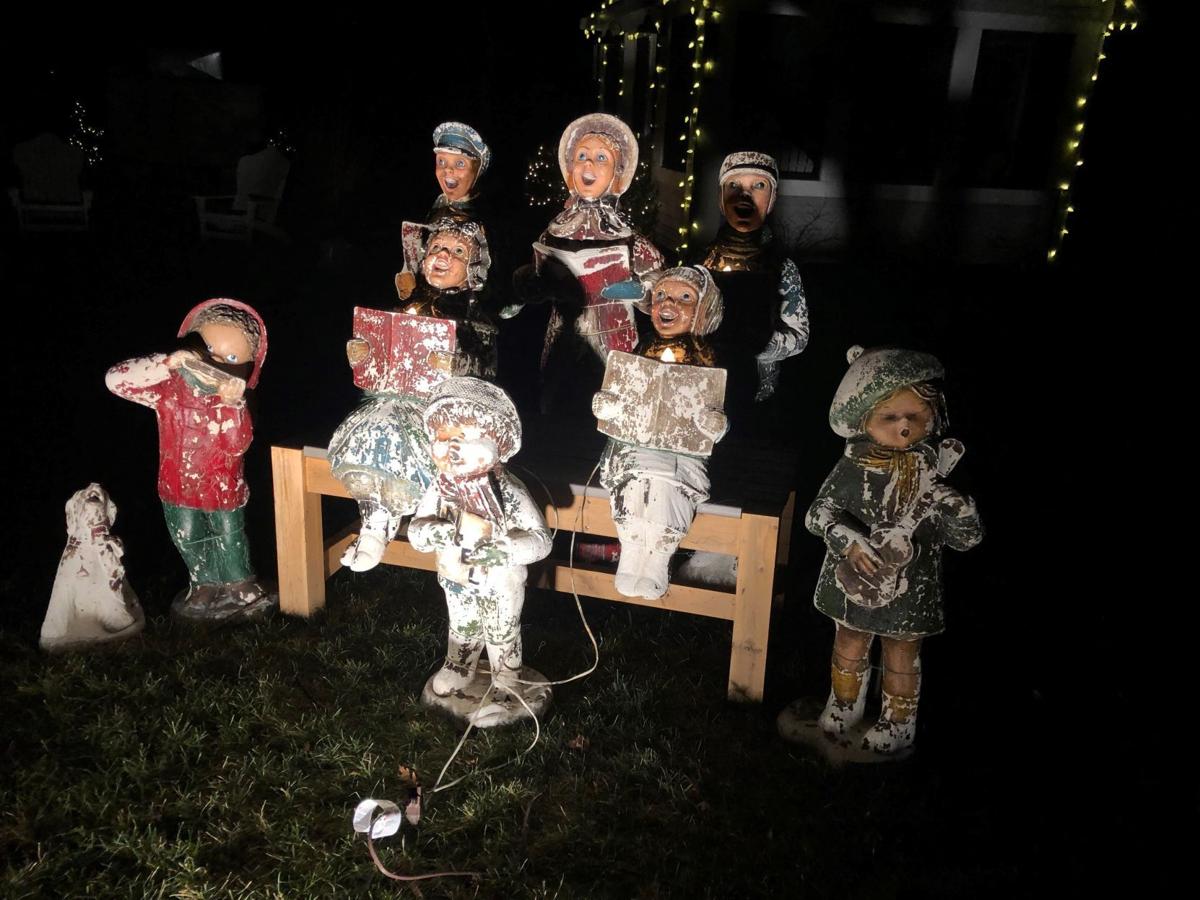 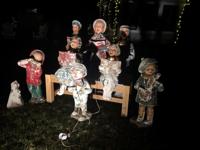 One of the displays at the Collins' family home on James Street. 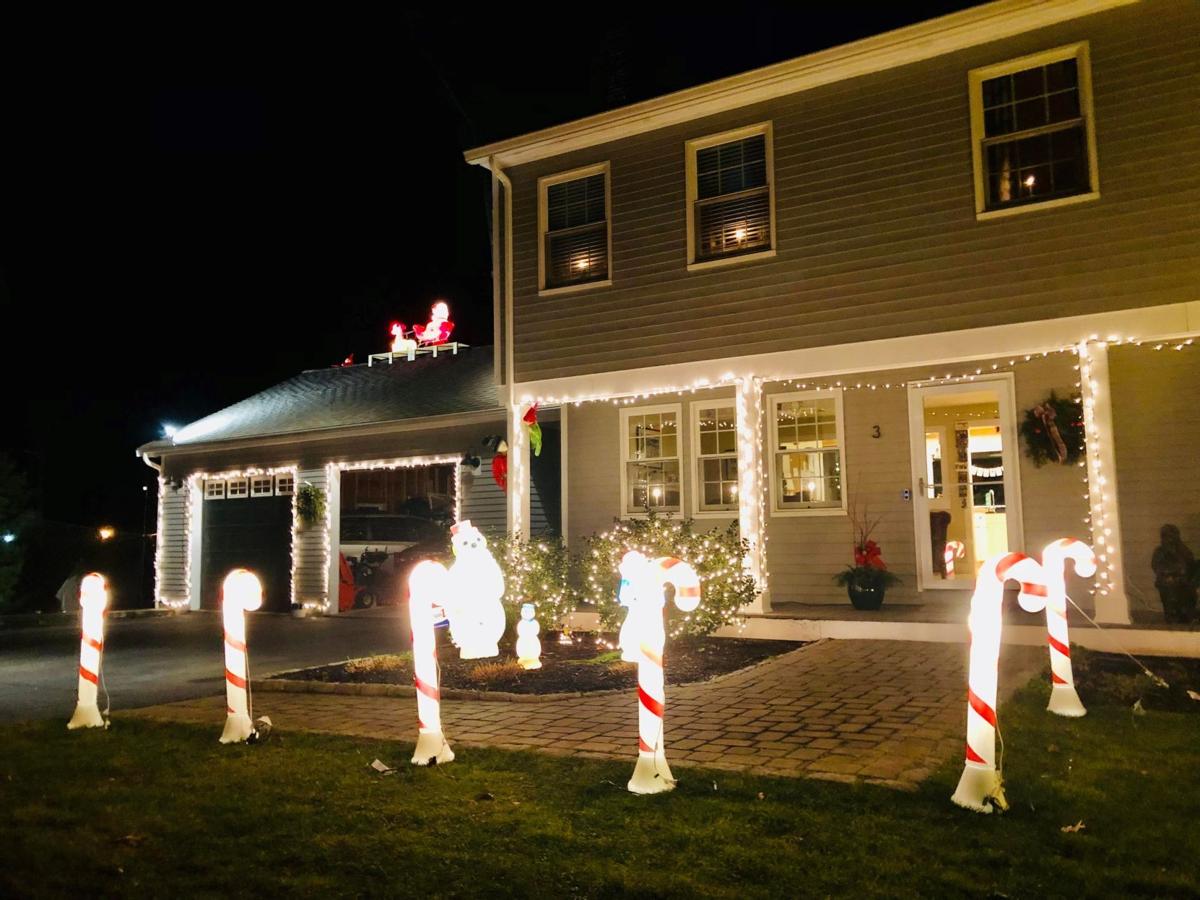 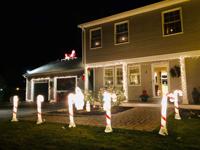 The “Bing Crosby” Award went to the Collins family on James Street. 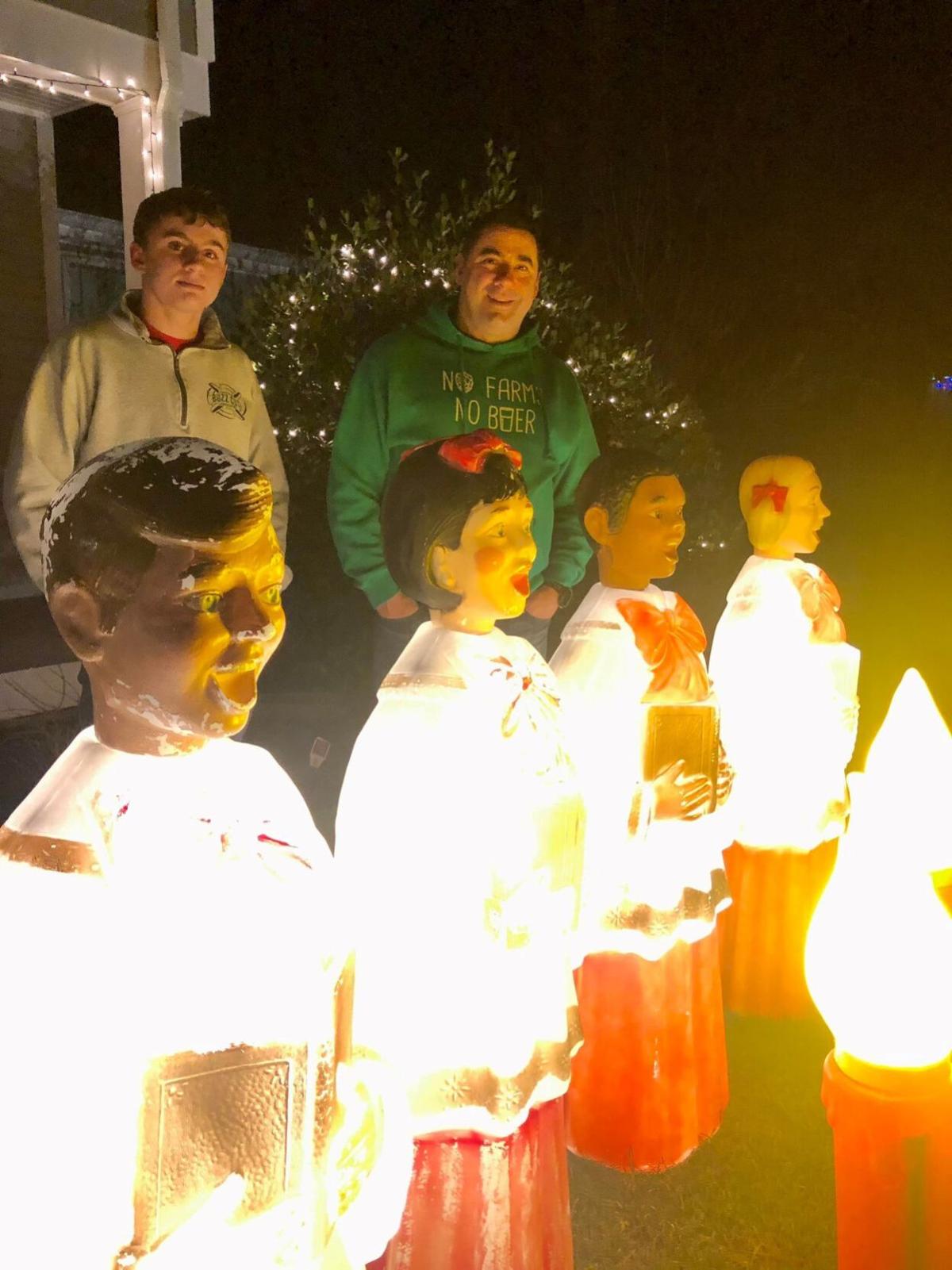 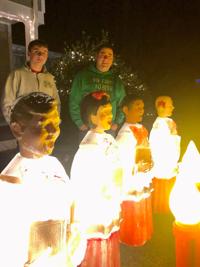 Carolers stand in front of Jack Collins, 17, and his father Kenny Collins. 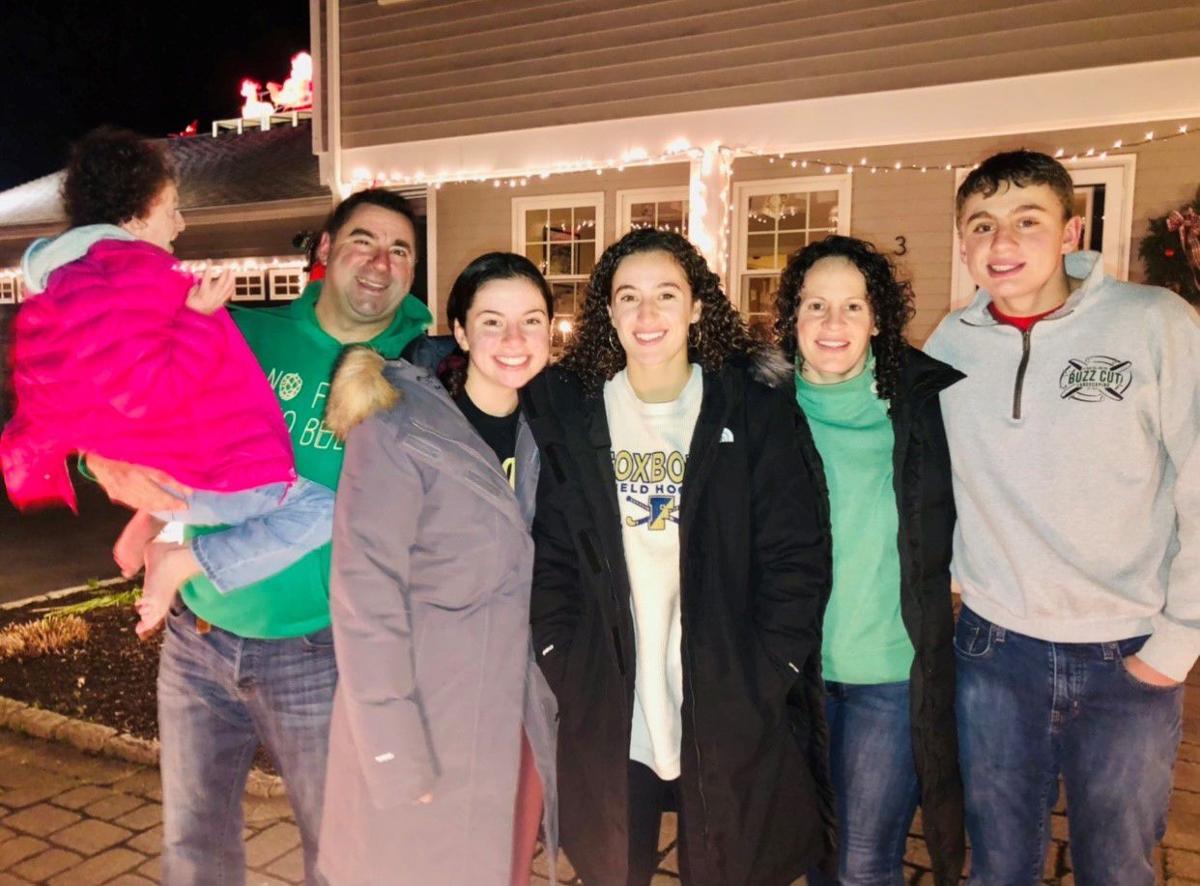 The Collins' family outside their James Street home.

This display at the Fiumara family home on Samson Road won the “Over the Rainbow” Award..

A Christmas scene on Samson Road.

One of the displays at the Collins' family home on James Street.

The “Bing Crosby” Award went to the Collins family on James Street.

Carolers stand in front of Jack Collins, 17, and his father Kenny Collins.

The Collins' family outside their James Street home.

Decorating your house for the holidays can get serious when there is a competition involved.

Some families did just that, all in good spirit, entering the 2nd annual Foxboro Jaycees lights contest.

“We want to celebrate the light people are bringing into our lives with these beautiful holiday light displays. Each winning house was notified via email and received a $25 Stop & Shop gift card from the Jaycees,” Bob Gillis, Foxboro Jaycees member who co-chaired the event with another Jaycees member Pam Warren this year, said in announcing the winners.

The winner and name in each category are:

Joe and Kristen Fiumara who have lived in Foxboro since 2008, received the “Over the Rainbow” award.

Joe said they have been decorating the house since the first December that they moved in. They decided to join the contest because he loved the idea and hoped it would get more friends around town to light up Foxboro with their competitive juices.

The couple participated last year but, unfortunately, they did not win.

“I think I was placed in the wrong category,” Joe said.

At first, he did it for their children Peter, now 17, Nicholas 14, and Jake 11, because they would light up every night to see the display.

Now he says he does it for the new generation of young kids in the neighborhood like the Whites, Kolodny’s, and the Macri’s.

“Maybe because I channel my inner Clark W. Griswald as well. I think this idea by the Jaycees is fantastic. It creates a Christmas spirit amongst neighbors and friends,” Joe said.

He thinks there are enough people that would like to see a Halloween contest as well and he said he would be happy to pay to submit for these contests to donate to the local food bank.

Jan Donaway, who received the “Clark Griswold”/“Friend of the Electric Company” award, has lived in Foxboro since 1980.

“I have decorated all 28 years. I worked at Sunlight Farm for 20 years and we would open for Christmas the day after Thanksgiving so my lights were always done and lit Thanksgiving night.”

She said last year a Jaycee member stopped at her house and said: “Are you in the contest?” and Jan said: “What contest?”

So she decided to enter this year.

“I love to decorate for all holidays, especially Christmas. It makes me happy and I have had so many nice comments, so if I can make someone else happy that is my goal,” Jan said.

She now has a 2-year-old grandson and she said he loves the lights.

“I think it is a fun contest and I wish more people entered. There are many nice displays in town.”

“We have always decorated our house but added to the collection the past few years. The elves, the Dicken’s Carolers, and most of the blow molds were at my parent’s house in Walpole for 50 years,” Kenny said.

He said his parents made the elves, one to represent each family member and one cousin as he is one of 8 children. He said every year they decorated the yard and roof.

“I finally convinced my father to give them all to me and we love continuing the tradition in Foxboro. When I saw the contest last year, I knew I had the perfect ‘old school’ set and thought it would be a great way to honor my family,” Kenny said.

They have won the “Bing Crosby” award two years in a row.

“Meg and I both grew up celebrating Christmas which was such an important part of our upbringing and we have brought those traditions and created our family traditions," Kenny said. “We are thrilled that the Jaycees run this competition as it is awesome to see all the cars drive by to see the yard lit up.”

Their daughter, Mary, 15 said she is excited about her family’s win.

“I know especially my dad works really hard putting up all the decorations and it’s funny because they are really old and I know that they used to be my grandfather’s so they’re being passed down, so that just makes it even cooler,” she said.

“I donated the card to a food drive for those in need organized by Deacon Paul in South Boston,” Kenny said.

Gillis extended his gratitude on behalf of the Jaycees.

“We would like to thank everyone who entered, and also everyone else who also decorated their homes. There are a lot of beautiful displays in Foxboro and you make the darker days of winter (and 2021) so much brighter with your light displays, big and small.”