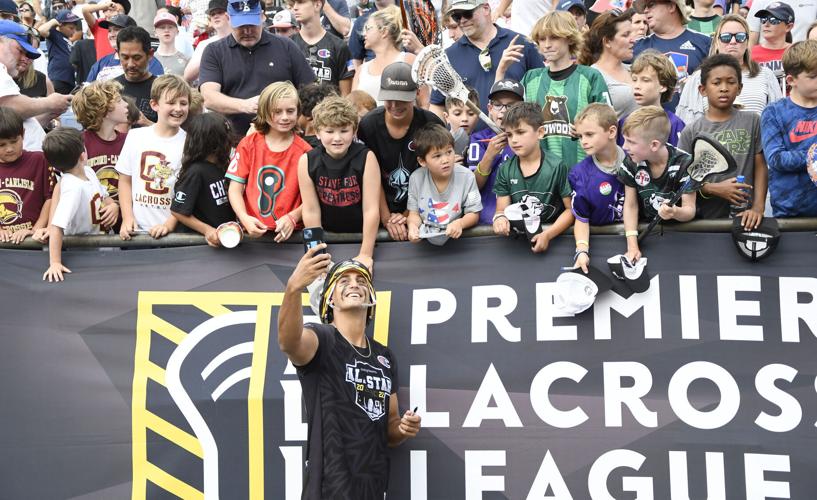 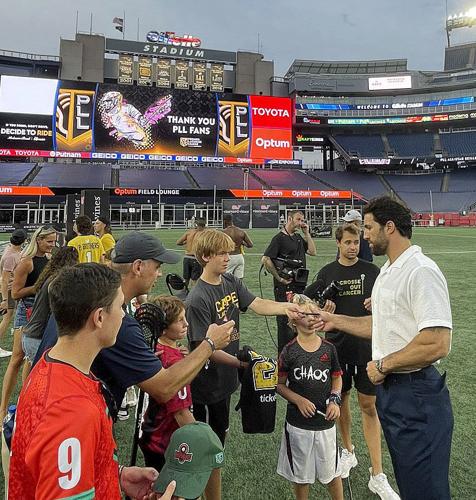 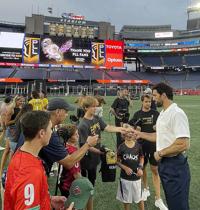 Premier Lacrosse League co-founder Paul Rabil (right, in white) stands and signs autographs for fans after the conclusion of the 2022 Premier Lacrosse League All-Star Skills Competition on Saturday at Gillette Stadium. Rabil, a former Boston Cannons player in the MLL and player in the PLL, expressed excitement and nostalgia in bringing the PLL back to Gillette, where the league played its first games in 2019. 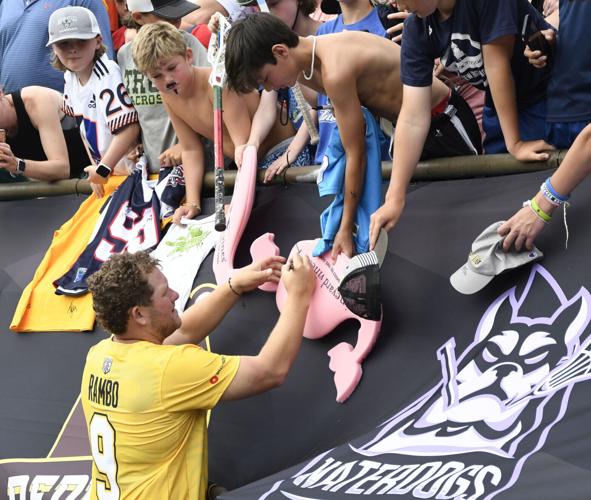 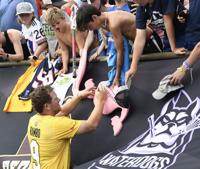 Premier Lacrosse League co-founder Paul Rabil (right, in white) stands and signs autographs for fans after the conclusion of the 2022 Premier Lacrosse League All-Star Skills Competition on Saturday at Gillette Stadium. Rabil, a former Boston Cannons player in the MLL and player in the PLL, expressed excitement and nostalgia in bringing the PLL back to Gillette, where the league played its first games in 2019.

Following a skills competition that saw a hardest-shot contest (Chaos LC’s Jarrod Neumann), fastest-player contest (Jack Roweltt), accuracy contest (Archers LC’s Marcus Holman), goalie challenge (Whipsnakes LC’s Kyle Bernlohr) and freestyle contest (Waterdogs LC’s Michael Sowers), Rabil took some time to sign autographs for young fans and talk to co-workers and league players. Rabil retired from professional lacrosse in 2021 after playing eight years with the Boston Cannons across the now-defunct Major League Lacrosse and PLL. He played four seasons with the Long Island Lizards in the MLL before playing for Atlas LC in the PLL. A short stint with the Cannons in 2021 preceded his retirement professionally at the age of 35.

A return to Massachusetts was a nostalgic one for Rabil, who acknowledged some longtime supporters of him who donned Cannons jerseys with his legendary No. 99 on the back. Premier League Lacrosse played at Gillette for the first time since its league-opening weekend in 2019.

“It’s incredible. It’s emotional, nostalgic in a way,” Rabil said. “I loved playing in front of Cannons fans. I know a lot of them are here because I see the jerseys. The (All-Star Game) was awesome and the players were great and we had some good competition here.”

The retirement helped him turn his attention to the league while still being a player-first-minded show-runner. Since its inception, PLL has gone from an NBS Sports TV deal to ESPN and has brought on Champion as an official sponsor. PLL also reached an agreement with DraftKings and Gatorade. The merging of Major League Lacrosse and Premier Lacrosse League also brought expansion of the league by two teams, showing its continuing growth while also taking on an established history in MLL.

And of course, the constant marketing of the sport on social-media platforms such as Twitter, Instagram and TikTok have helped reach the younger audience. Throughout the day, videos were made of content creators representing the league for hundreds of thousands, or millions, to view while the game was simultaneously broadcast on ESPN. Total social impressions have totaled over 85 million as of June, with an average cable audience up 147% and attendance reaching as high as an 81% increase as well.

It’s clear the game is growing and the future of the game is in great hands, said Rabil looking out at the hundreds of still-screaming and yelling fans asking for autographs or some equipment after the skills competition.

“There’s a lot of posterity for the sport,” Rabil said. “A young generation sticking around here and watching their idols, seeing it with their fathers who played and everyone in-between, including us pros. It’s a special game. It’s a Native American game and connects us in so many special ways that we don’t realize.”

With Saturday’s All-Star Game being the first time the mid-summer classic came to Gillette Stadium, Rabil wouldn’t say if the game will come back for another, but did point out playoff lacrosse is on the horizon at Gillette on September 3.

Coming out of the All-Star break, Atlas LC, one of Rabil’s former teams, is tied with Chrome LC and Whipsnakes LC with 4-1 records for the top spot. All three teams are a projected lock for the playoffs, with Atlas leading all teams at 17.12% to win the championship series for the first time in league history.

Rabil expects an equally-exciting crowd, along with new and familiar faces who will undoubtedly be shouting for his attention to get an autograph of the all-time leading scorer in pro outdoor lacrosse history.

“We’ll be coming back before you know it for the quarterfinals, in the first week of September,” Rabil said. “We’re expecting an awesome crowd, a lot of familiar faces from today and some new ones.”