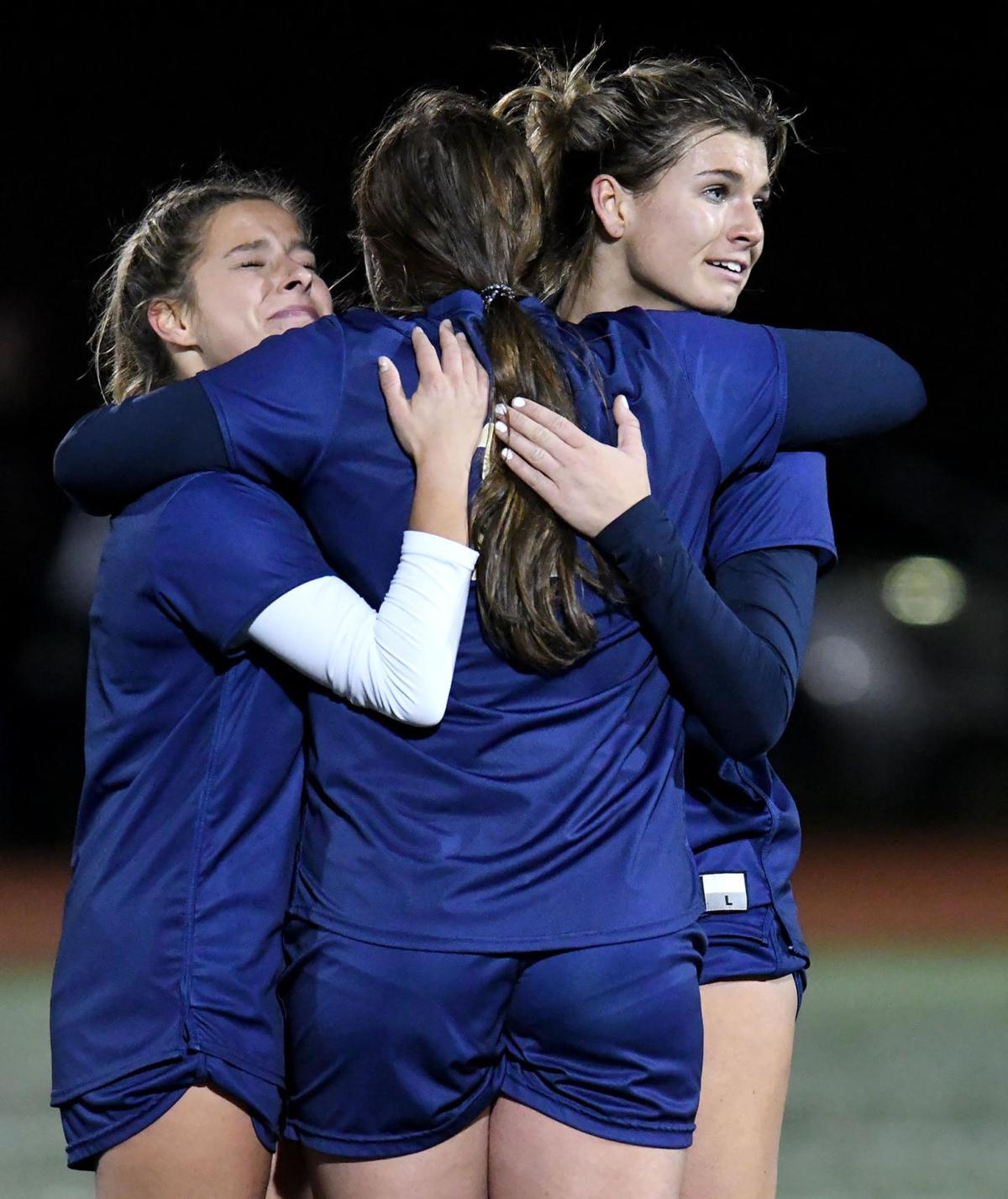 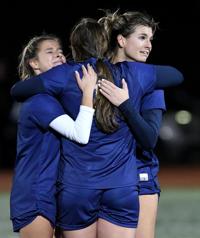 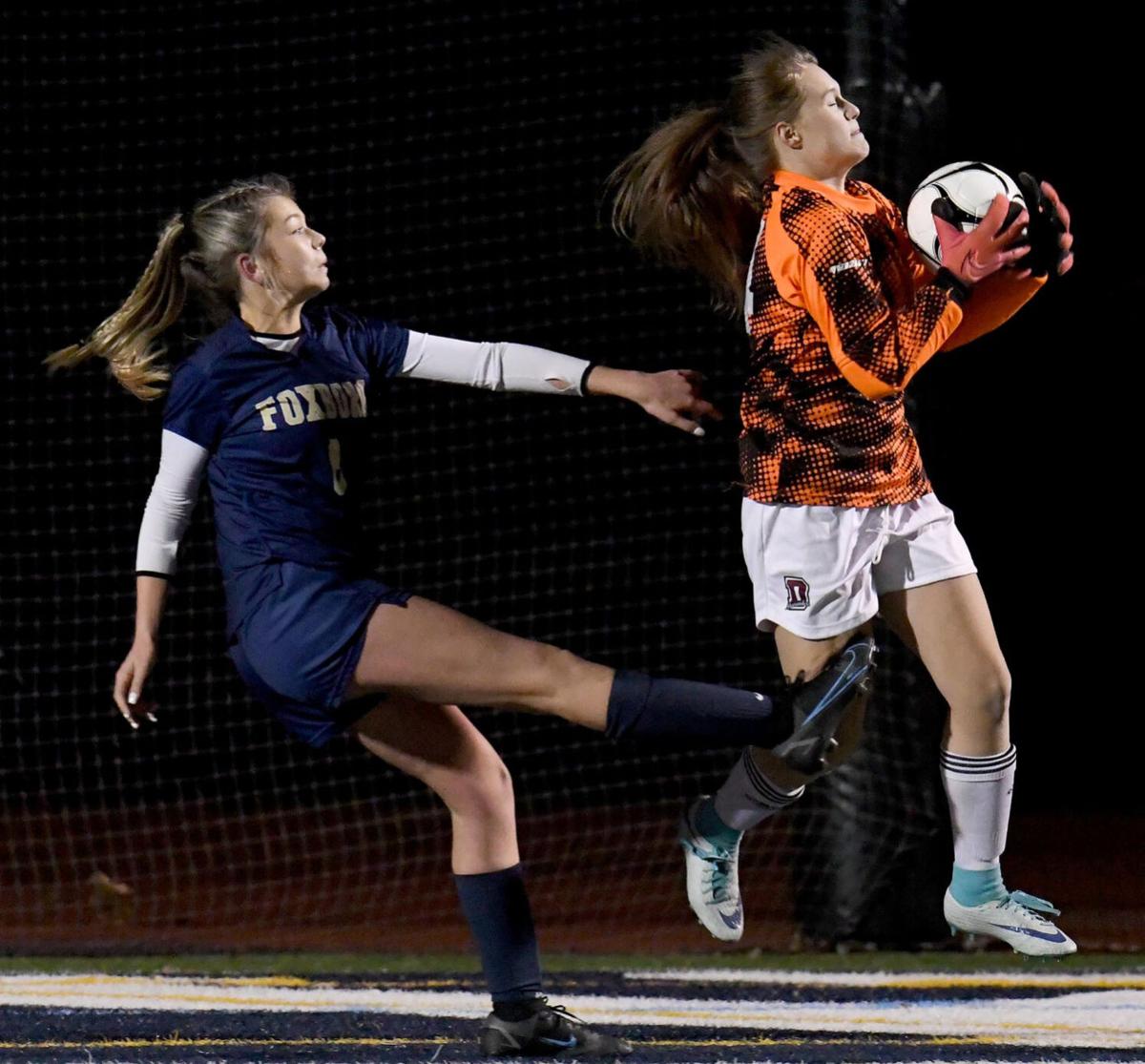 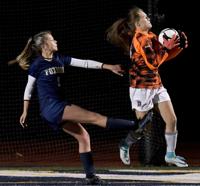 WESTWOOD — The members of the 2021 edition of the Foxboro High School girls’ soccer team will never forget their season, the one in which the Warriors lost their first — and last — matches.

Owning a 20-match win streak, Foxboro upended itself by surrendering a pair of goals to Providence College-bound senior midfielder Abbey Finn within the first 10 minutes of their MIAA Division 3 Tournament state semifinal match Tuesday night at Xaverian High before falling, 3-0.

“Dedham was a very good team, and when you give up two goals like that so early in the match, it’s difficult to play from behind,” Foxboro coach Katie Stalcup said.

The Warriors were minus injured senior striker and 31-goal scorer Kailee McCabe for a second straight match, and then lost senior midfielder, attacking catalyst and “set piece” striker Jordan Carman late in the first half.

That was no formula for a second-half resurrection. The No. 2 seed Warriors (16-2-4) had survived a precarious postseason adventure, taking three consecutive 1-0 victories. The Warriors beat No. 31 seed Cardinal Spellman, No. 15 seed Newburyport on penalty kicks and No. 23-seeded Ursuline Academy en route to the Final Four.

Dedham (16-0-6), the No. 3 seed Tri-Valley League power, has not allowed a goal during the Division 3 Tournament, beating No. 30 Rockland, No. 14 Medway and No. 11 Greater Dunstable, scoring 10 goals over those three matches. Notably, coach Meg Elliott’s Norton High Lancers fared best among the Marauders’ foes this season, engaging in 1-1 and 0-0 ties during the course of the TVL season.

“They had some good speed up top,” Stalcup said of the Marauders using that to score the go-ahead goal in the sixth minute and a second goal in the 10th minute, both by Finn.

Finn perfectly placed a 25-yard drive from the right side, after taking a pass from the deep corner from Jamie McDonough, to the top-left corner of the Foxboro net for the match-winner.

Finn placed herself in position, right in the goal-mouth area, to finish off of bouncing ball out of scramble four minutes later.

McDonough delivered the third Dedham goal 11 minutes into the second half with a breakaway bid down the right side.

Foxboro sophomore goalkeeper Allie Sougaris (12 saves) kept the Warriors in contention, taking away five sure-fire second half Dedham goals, while covering the post on many intrusions.

Finn nearly had a first-half hat trick, drilling a perfectly-placed drive just under the crossbar in the 24th minute, but the goal was nullified by an offside infraction.

Foxboro was limited to one corner kick, coming in the fist half by Lauren Miley from the left side in the 38th minute. On that sequence, the Warriors created two of their best scoring chances in the match, with Neve Taylor and Meg Foley both having loose-ball shots blocked.

“We knew that they (Dedham) has a few girls who can shoot it from outside and have speed,” Stalcup said. “They have good players.”

Foxboro created three strong scoring chances midway through the first half that might have changed the complexion of the game, had goals resulted. Taylor had a one-touch volley sail just side right of the Dedham net at 14. Carman unleashed a drive off the left wing at 17, then labeled a direct kick (after Miley was tripped just outside the penalty box), both of which were taken down by Dedham sophomore netminder Chea Michaelidis.

Earlier, Carman had throw-ins at five, 13 and 23 minutes which went unfulfilled. And still early in the second half, Foxboro was one bounce away from making it a one-goal match when Miley uncorked a left-footed shot at 42 and a direct kick just over the crossbar at 49.

Becca Foley had a strongly hit long ball on goal at 50 minutes, a good left-footed striker at 54 and a testing chip shot at 55.

Foxboro was riding a 16-0-4 unbeaten streak since a season-opening loss to King Philip.

“Dedham made it difficult for us to create and build an attack, they really did,” Stalcup said. “We had some chances, they didn’t dominate the whole game. We couldn’t execute.”

FOXBORO – The Foxboro High Warriors extended their unbeaten skein to 20 matches in beating Ursuline Academy in the quarterfinal round of the MIAA Division 3 Tournament last Saturday.

On the strength of a goal by senior Jordan Carman in the 35th minute of the first half, Foxboro (16-1-4) prevailed in a match not as close as the final margin indicated.

Minus senior striker and 31-goal scorer Kailee McCabe (ankle), the Warriors maintained their attacking schemes with Erin Foley and Carman as the primary perpetrators, with Neve Taylor moving into the forward role.

Grace Riley set up Foxboro’s match-winning goal with a throw-in from the right side, followed by Carman drilling a 25-yard shot.

Ursuline played a style much unlike the Warriors had experienced through their Hockomock League season. “They used a lot of one and two touches, a lot of give-and-go’s,” Stalcup explained. “We had a good game plan for them.”

“We defended well, a lot of their shots were from outside of the box,” Stalcup said. “Ursuline was strong at midfield, but we gave up just two corner kicks.”

FOXBORO — Kate Stalcup and the Foxboro High girls’ soccer team just knew that it was going to be a struggle to survive in the second round of the MIAA Division 3 Tournament last Wednesday against Cape Ann League perennial power Newburyport.

The Warriors were scoreless through the first half, and Foxboro lost senior striker and Hockomock League leading scorer (31 goals) Kailee McCabe to a right ankle injury in the 23rd minute.

The Warriors went scoreless through the second half and then a pair of “sudden victory” 10-minute overtime periods.

Ultimately, it was sophomore goalkeeper Ally Sougaris who denied the Clippers in the fourth round of the penalty-kick shootout, then senior Meghan Burke delivered the “golden goal,” the match-winner for Foxboro in the winner-take-all sweepstakes.

With an 19-match unbeaten skein in tow, the No. 2-seeded Warriors of Foxboro High kept their dream season alive in a bid for an MIAA State Championship by taking a 1-0 victory on penalty kicks over the Clippers at Sam Berns Field.

“We played really well without Kailee (McCabe),” Stalcup said. “At first when she first went down, they were all a little worried, but within minutes they picked it up and carried the intensity.”

Since losing their season opener to King Philip, Foxboro has gone without a loss (15-0-4) while snapping the Clippers’ eight-match (6-0-2) unbeaten skein, denying Newburyport of a bid for a 16th shutout of the season.

“We were determined to keep the pressure (on Foxboro) and don’t back off,” Clipper coach Kevin Sheridan said. Goalkeeper Gabby Loughran and central defender Katelyn Gallagher limited the Warriors’ customary prime-time scoring chances.

Without McCabe on the frontline for Foxboro, Stalcup used Jordan Carman, Neve Taylor and Deanna Hardiman for attackers and the Warriors carried the play to Newburyport.

After 100 scoreless minutes, Foxboro scored on its first (Carman), third (Lindsey Resnick) and fourth (Lauren Miley) rounds of the shootout. Deadlocked at 3-3 entering the fifth round of the shootout, Sougaris dove to the left to stop the Clippers’ fifth shot, then Burke buried the ball with a drive to the left side. Newburyport had misfired on its very first attempt at Sougaris.

“We dominated the second half, it was great to see and watch,” Stalcup said of Foxboro’s forward motion. “Newburyport was a good team. Ally (Sougaris) played really well, the entire back line did in that we didn’t get them many scoring chances in the second half. The defense did so well in keeping the pressure out of our side.”

Foxboro created some prime first-half scoring chances with corner kicks in the eighth, 12th and 26th minutes. Carman unleashed a long ball just over the crossbar in the 11th minute and a testing long ball in the 20th minute. Miley put a header on goal in the 23rd minute and Erin Foley was in close off of the 26th-minute corner.

In the meantime, the Warrior defense resisted Clipper intrusions. Sougaris made a clever save off a direct kick in the ninth minute; Resnick denied long balls in the 28th and 38th minutes; and Foley took away a dangerous cross in the 29th minute.

“The longer it was scoreless, there was a little bit of frustration, but we had so many opportunities (to score),” Stalcup said. “Just not finishing some of the cross and missing some of the shots.