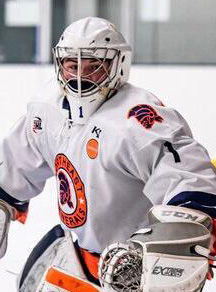 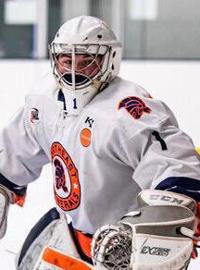 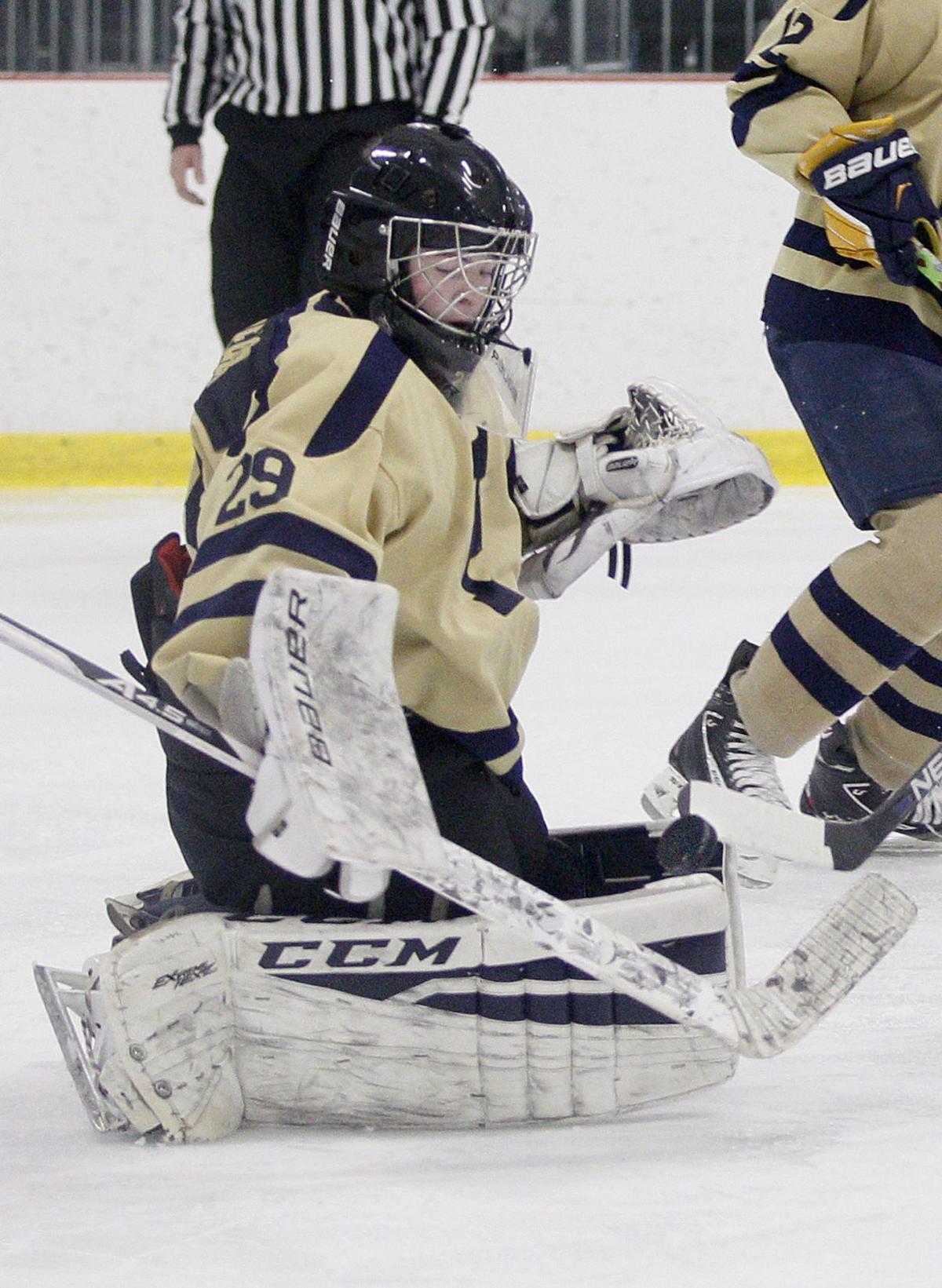 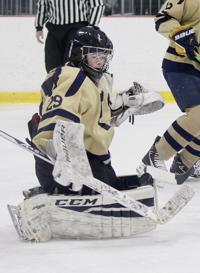 Foxboro’s Espen Reager makes a save during a game against Norton at Foxboro Sports Center. 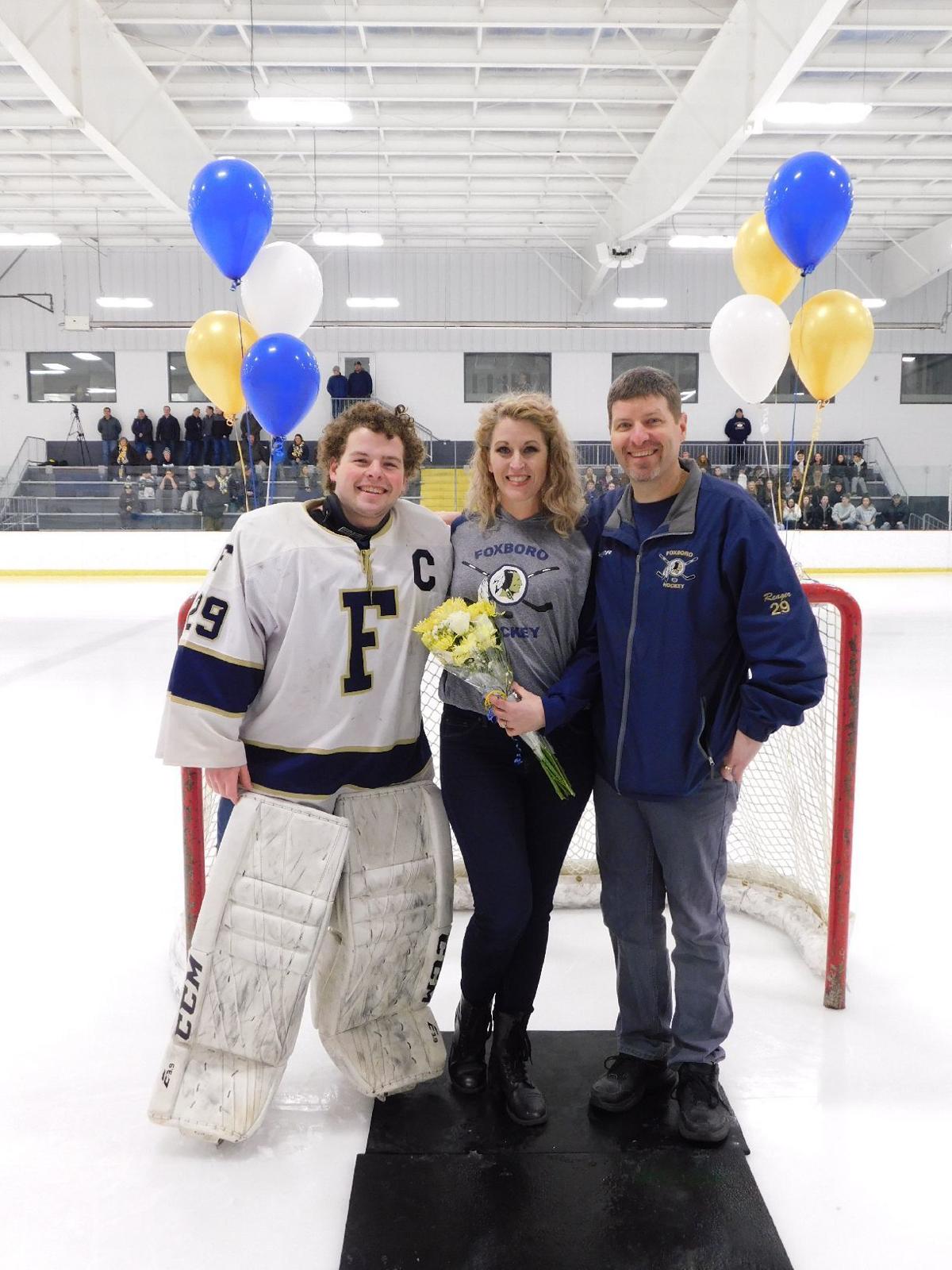 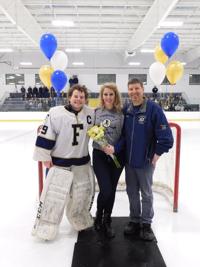 Foxboro’s Espen Reager makes a save during a game against Norton at Foxboro Sports Center.

As a goalkeeper, Foxboro High School graduate Espen Reager has to make quick decisions on the ice.

Reager has to position himself to ward off the puck, which can approach him at any number of angles, at any range of velocity. He will dive and slide, stand square and tall – anything to prevent the red light signifying a goal has been scored from being turned on behind him.

Reager made the decision three years ago to become a Foxboro Warrior and upon graduation, he made another decision to further his hockey career in the North American Hockey League with the Northeast Generals.

“I’ve grown as a person and as a hockey player,” Reager said earlier this week from the New England Sports Village, the base of operations for the Generals. “From the coaching staff (Bryan Erickson), to the league, to the games, to my teammates, it’s been a good experience.”

Reager ranks No. 6 among all Tier 3 goalkeepers in the North American Hockey League with a 12-1 record overall (12-0 in games in which he has started), owning a 1.78 goals against mark with a .93 save percentage and three shutouts.

Reager played the previous three seasons for Mark Cedorchuk and the Warriors, in addition to tending goal in the Walpole Express junior program. And his brother Eoin is a highly productive junior forward currently at Foxboro High.

Just last weekend, Reager posted 35 saves in a 3-2 win over the Springfield Hat Tricks in the first game of a two-game set and then had 29 saves in an 8-2 victory in the second game of the series.

In the second game, Ben Pizzimenti scored two goals, the second of which was 18 seconds into the second period while Kosinski also had two goals, both in the third period (at 0:50 and at 15:45).

Reager and the Generals lead the East Division with a 20-6 record, having a 27-point lead over the second place team. Northeast’s 20 wins are tied for the fourth most in the 31-team Tier 3 of NAHL, the Generals out-scoring foes by a 155-63 margin, the second most goals in the league.

“That’s one of the great things about playing with the Generals is that I have teammates from all over United States and the world,” Reager said of the 15 states, the United Kingdom and Belgium being represented on the roster. “It’s fun to learn about other states and other countries. It’s interesting; I never thought that we’d have this variety of players.”

Reager remembers his first game and the first goal he surrendered for the Generals.

“I was nervous, I didn’t know what to expect,” he recalled. “I heard a lot about the league and the kind of players in the league. I came out in my first game and gave up a really, really bad goal.

“Once I finished out that game (and not allowing another goal for a win), I played pretty well after that goal. I knew that I could make a mistake or two and continue to play well. When you’re stressed out a lot, then you make a mistake and that can turn into more mistakes.”

With that experience, it’s helped him gain perspective on any mistakes that may come on the ice.

“It makes me not as angry with the mistakes I might now make,” he said. “In my 12 starts, I haven’t lost – with just that, I’m second in the league in stats. I kind of expect to win. And now that we’ve faced every team, I know what to expect from shooters.”

Reager’s parents are California natives. His dad Kelly and mom Michelle are devout San Jose Sharks fans. Reager was born in and lived in Colorado, too, where he became an Avalanche fan. He’s also lived in Pennsylvania, but has turned his allegiance to the Columbus Blue Jackets, coached by Massachusetts native John Tortorella.

Of course, playing hockey in the basement of the family’s Foxboro homestead with his dad and brother or street hockey aided Reager’s approach to goaltending – he had to be prepared for pucks, tennis balls, racquet balls, lacrosse balls, golf-ball sized foam balls.

“Those balls would curve, so that really helped with my hand-eye coordination,” he said. “I had a lot of practice before I ever started, that more than anything jump-started my hockey career.”

Of course, the Reagers will never admit to breaking any windows or denting the garage door.

Reager doesn’t have any regrets in joining the Generals instead of heading off to college. In part because of the opportunities that might present themselves for a college scholarship, of which the NAHL is a breeding ground for NCAA Division I, II and III schools.

“It’s been a good decision,” Reager said, just as he believes his decision to leave Coyle-Cassidy High School after his freshman year to attend Foxboro High was. He was in the Taunton parochial school’s varsity hockey program as an eighth and ninth grader, but was not being awarded much ice time.

“I hardly played much my freshman year at Coyle,” Reager said. “I think I played one game and that kind of destroys your confidence. It makes for a boring season sitting on the bench.”

At Foxboro, Reager was immediately sent out onto the ice at the Foxboro Sports Center.

“Playing in the Hockomock League, more than anything, it helped with my confidence,” Reager said. “Coming back to Foxboro was one of the better decisions that I’ve made in my hockey career. I got to play mostly every minute of every game at Foxboro.

“Confidence means the most when you’re playing goalie. Playing in the Hockomock League helped my career a lot. I might have not developed as much. Playing teams like Franklin and Mansfield and King Philip, that brought a lot of experience in 45 minutes of hockey. It’s been a different journey.”

Reager played some baseball until high school. Then in high school, he played some soccer for this first three years, but switched to golf for the fall season and will admit to never having broken 80 at the Foxborough Country Club. And once he became a Warrior, he came under the spell and servitude of lacrosse coach Matt Noone as the goalkeeper.

“I played quite a few sports, I’m clearly not as good as the other ones as I am as hockey – hockey has always been my No. 1 sport,” Reager said.

“Playing all those other sports has helped me as a hockey player because I played goalie in soccer and in lacrosse – that helped with a lot of the hand-eye coordination,” he continued. “Especially with lacrosse and having to take some of those balls off of the legs, you definitely don’t feel good. That helps with the confidence because I would not shy away from shots. And playing other positions helped with conditioning – all the running that I’ve done.”

And Reager credits his lacrosse coach for helping instill confidence.

“Playing for Coach (Matt) Noone, I loved him, he helped me so much building confidence. I was not great because I didn’t start playing until my freshman year. He always knew exactly the right thing to say. He saw something in me and took me under his wing and coached me a lot. I grew a lot under his coaching.”

While he was new to lacrosse, Reager has played hockey “for a lot of teams in a lot of leagues,” he said of his development, also with the South Shore Kings, based at the Foxboro Sports Center.

“I’d play for five or six teams growing up because everybody needs a goalie,” Reager said of putting on his pads and being the last line of defense on the ice. “If I wasn’t playing 150-200 games a season, something was wrong!”

When the family arrived in Foxboro some 14 years ago, he began playing in the Kings’ program and has been with the Walpole Express for the past five years. Reager was initially going to continue in the Express junior program when the chance came to continue his career in the NAHL with the Generals, which was a natural fit being 15 minutes down Route 95 from Foxboro.

“That (Generals) would be a better fit, I’m not sad about that decision,” Reager said of the step up in ice hockey competition. “Being so close, that was a deciding factor,” he added of not trying his lot with the 30 other NAHL teams. “There was a huge upside,” he said.

“I like to think that I’m playing pretty well at the moment and playing against some of these better teams,” Reager said. “I’m feeling pretty good about where I’m at.”

In these COVID-19 days, college scouts are not spread out in the stands or in abundance at any of the showcase tournaments to review prospects. So Reager just may have to spend another season in the NAHL before landing on a college campus and rink.

Standing 5-feet, 7-inches and weighing 175 pounds, Reager has dramatically altered his physical strength, too, with the Generals’ 90-minute practice sessions daily and the weight training program.

“There’s always off-ice stuff to do, I can feel and see that I’m getting stronger,” he said. “I never thought, growing up, that it would help me on the ice. Ever since, I feel my legs are stronger – I can slide easier. My skating is a lot smoother. I can change directions.”

And he’s gained something from each step of his hockey journey.

“Overall, all of my improvements have been kind of gradual. Playing at Foxboro High helped me with rebounds because my defensemen weren’t as strong as they are with the Generals, so I would focus on rebounds,” he said.

“Coming to the Generals, I had an idea of what I was doing with the rebounds and clearing the puck out. I do think that one thing I’ve improved upon, that comes with the strength is that my changing of directions and movement has been quicker,” he said.” A lot of odd-man rushes when they make two or three passes, I can stay square and not go into desperation.”

And he’s pleased with what he can bring to the games.

“I know that I can have a pretty good impact on the game. Without seeing the puck makes it very difficult to save it. Having a stronger defensive corps has taken a lot of stress out of my life. I do my best and so far it’s worked out pretty well. The saves might look easier because I’m making them easier.”

“Every day that you can wake up, go to the rink and get on the ice is a good day.”