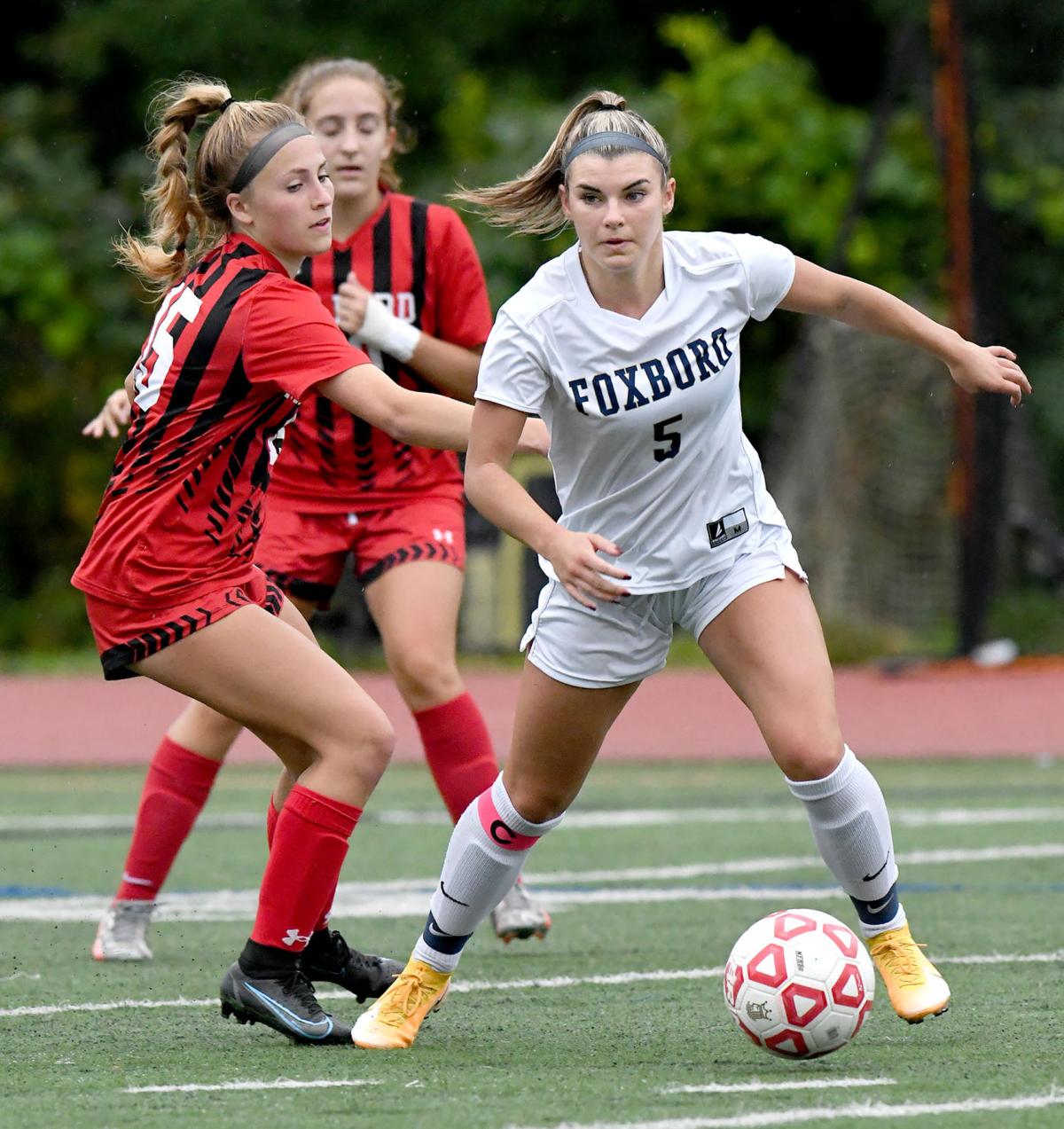 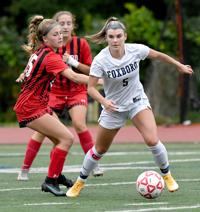 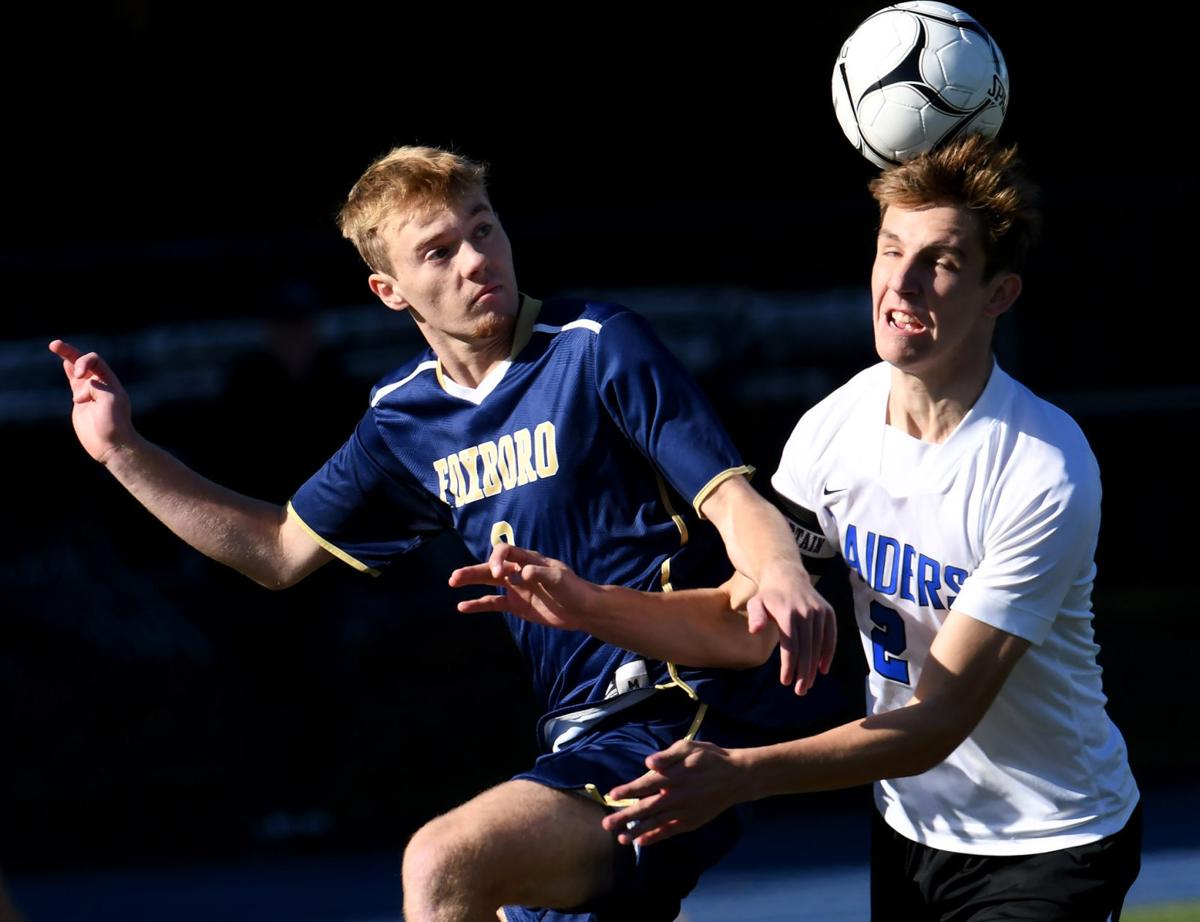 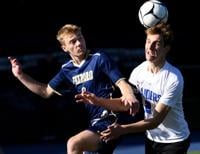 Foxboro High’s Matt Angelini, left, and Dover-Sherborn High’s Conor Keating battle for the ball during a match earlier this season.

Foxboro High’s Matt Angelini, left, and Dover-Sherborn High’s Conor Keating battle for the ball during a match earlier this season.

While the Foxboro High girls soccer team undoubtedly had a tremendous season this fall, going 16-2-4, with a 20-game unbeaten streak. Still, there was a twinge of melancholy, given that the Warriors were so close to a state championship before a season-ending loss to Dedham High in the MIAA Division 3 state tournament semifinal, which was also the swan song for three of the program’s most prolific players.

Those three seniors — Meg Burke, Jordan Carman, and Kailee McCabe — top The Sun Chronicle/Foxboro Reporter 2021 Girls Soccer All-Star Team, along with sophomore teammate Erin Foley and junior Lauren Miley. All five were invaluable members of the Warrior juggernaut that dominated the Hockomock League for the better part of the season.

The three seniors will all be missed, as all were league all-stars, but McCabe in particular will definitely be hard to replace next season. McCabe was one of the most dominant players in the region, if not the state, for the past two seasons after leading Foxboro with 32 goals and 11 assists, and ending her Warriors’ career with 78 goals, two league titles and back-to-back Hockomock League MVPs. Selected as an All-New England player, McCabe was also named an All-American.

Right behind McCabe on the Hockomock League scoring list was her teammate, Carman, who tallied 14 goals and 17 assists.

The senior defender tallied a pair of goals and an assist for the Warriors, who went 12-1-3 in the Hockomock League and 16-2-4 overall. Coach Katie Stalcup calls Burke “a great leader, smart defender, hard worker, and she has great determination.” Burke was also selected as a league all-star.

Also a Hockomock League All-Star, Carman was a key component for the Warriors this season, scoring 16 goals and added 17 assists in a breakout senior season with the Warriors, who advanced all the way to the Div. 3 state semifinals. Carman finished second in the Hockomock in scoring, behind only teammate Kailee McCabe, and played multiple positions. She was a big part of the Warriors during their tournament run, and she stepped up after an injury sidelined McCabe in the first half of the round-of-16 game. According to coach Katie Stalcup, “She is an amazing competitor, a hard worker, and has a high soccer IQ.”

Erin Foley, FoxboroA Hockomock League Honorable Mention, Foley is a talented sophomore who tallied 10 goals and added 11 assists for Foxboro, which dropped only its first and last games of the season en route to a 16-2-4 record. “She is a tough competitor, has great ball skills, high soccer IQ, and is strong on the ball,” said Warriors coach Katie Stalcup.

Warriors coach Katie Stalcup succinctly described the senior as a “superstar.” Arguably the best girls soccer player in the area and certainly one of the best in the state, McCabe led Foxboro with 32 goals and 11 assists. Her 43 points were 11 more than any other player in the league. Injury cut short her postseason in the Div. 3 round of 16, but she ended her Foxboro career with 78 goals, two league titles, and she won back-to-back Hockomock League MVPs. After being selected as an All-New England player last fall, McCabe was named an All-American. “She is a super-talented player with amazing ball skills and finishing ability, a hard worker, a great leader, and makes everyone around her better,” Stalcup said. “Kailee is a once-in-a-decade kind of player.” McCabe will attend Holy Cross in the fall.

Miley, who also plays basketball for the Warriors, tallied five goals and three assists this fall for Foxboro, which had a 20-game unbeaten streak. “She is a smart, strong player, and she plays hard every minute she is out there,” coach Katie Stalcup said.

A Hockomock League All-Star, the senior wrapped up a solid four-year career with a strong 2021 season. Angelini, who has been playing for the Warriors since he was a freshman, was Foxboro’s leading scorer, one of just four players to reach double figures in goals this year with 11, and added five assists for 16 points (tied for fifth in the league) in the regular season. “Matt is a threat to score from anywhere on the field with his ability to strike the ball from distance,” said Foxboro head coach Dan Ambrosio.

In 18 Hockomock League games, the senior goalkeeper allowed just 24 goals for an impressive 1.30 goals-against average for the Warriors, who went 8-7-1 in the league and 9-9-1 overall. Axon also played ice hockey and ran track for Foxboro, participating in the 100 and 200 meters, along with the long jump and the triple jump.