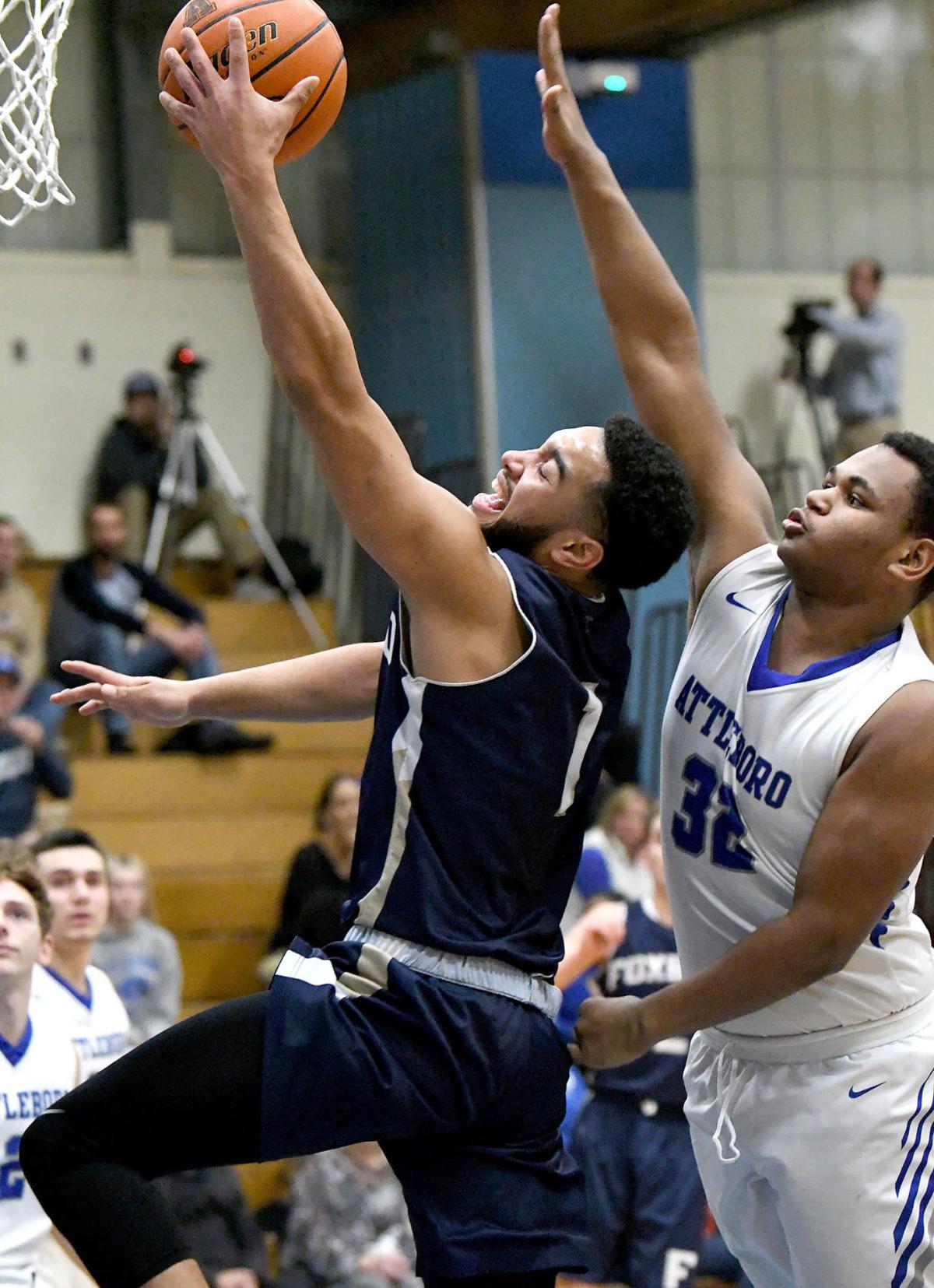 Foxboro High’s Brandon Borde (1) lays it up for two as Attleboro High’s Alvin Harrison defends during Tuesday’s contest in Attleboro. 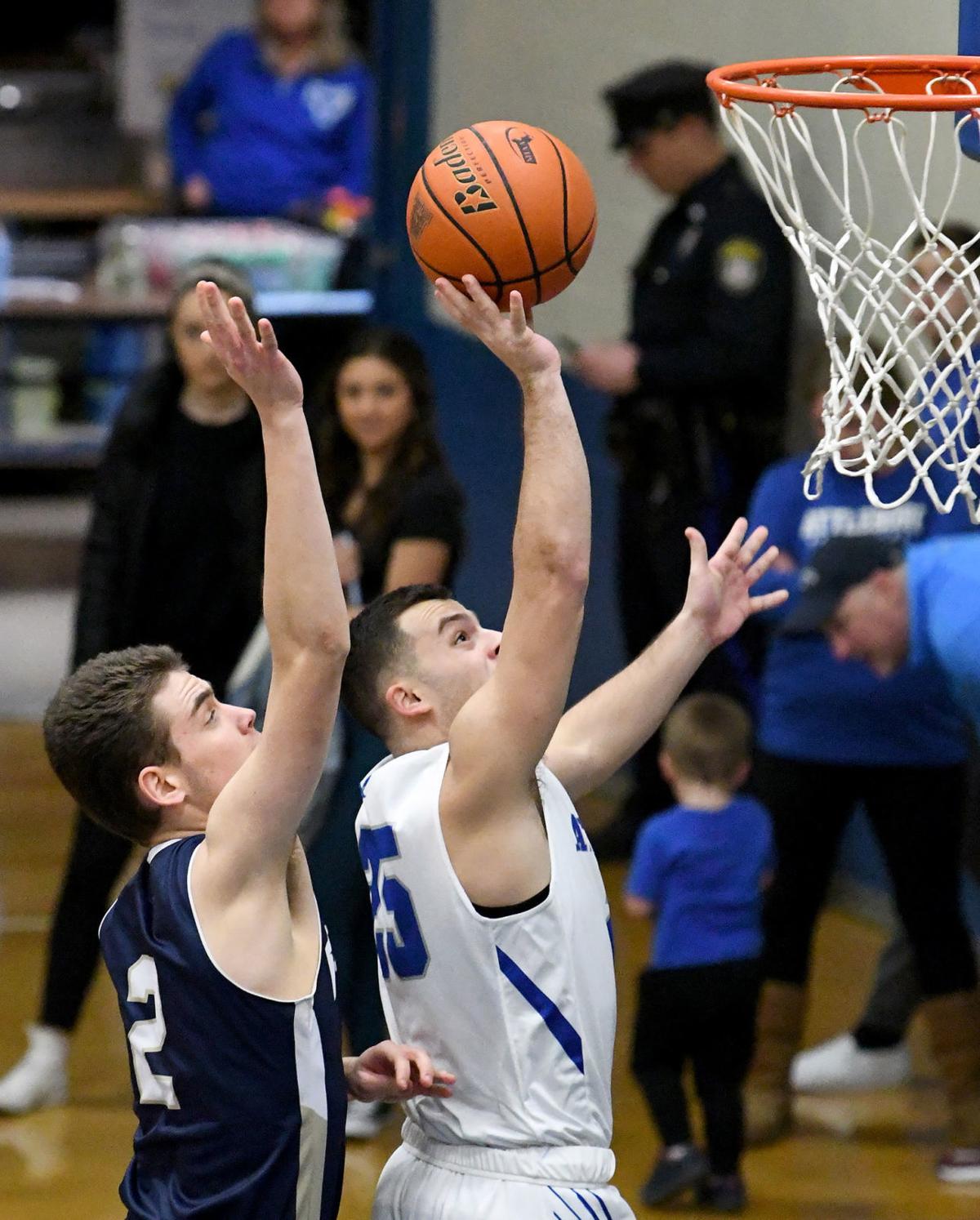 Foxboro High’s Brandon Borde (1) lays it up for two as Attleboro High’s Alvin Harrison defends during Tuesday’s contest in Attleboro.

Entering the week, the Foxboro High boys basketball team was the second stingiest team defensively in the Hockomock League, allowing a mere 51.6 points per game.

True to form, the Warriors placed themselves in position for a coveted victory on the road at Attleboro High Tuesday night, limiting the Bombardiers to 28 points through the first half and to 44 points at the third stop. Each juncture saw Foxboro deadlocked on the scoreboard.

Save for one 4-minute stretch of the fourth quarter, the Warriors executed their game plans to perfection, but wound up on the short end of a 62-58 decision.

Senior forward Ryan Hughes scored 20 points for Foxboro, 11 of them during the third quarter, to keep the Warriors apace with the Bombardiers.

Borde drove through the lane for two points and Will Morrison followed suit with a parade through the paint on the Warriors’ first two possessions of the fourth quarter to create a 48-44 lead, but the Bombardiers undermined Foxboro’s upset plans.

The Bombardiers reeled off 12 straight points, 4 from the hand of 6-foot-5 senior center Qualeem Charles (12 points, 10 rebounds) and 6 on a pair of 3-point field goals from junior guard Justin Daniels (career high 15 points) as AHS assumed a 56-48 lead with 3:28 remaining.

Limited to six points through three quarters of play, Charles did what he does best: dominate the paint. He scored a half-dozen points in low, while also taking in seven rebounds over the final eight minutes of play for AHS.

“We went to our strength,” Houle said of the Bombardiers’ 6-foot-5, 300-pound Charles.” We knew what we needed to do and we executed at the end.”

“I’m proud of the fact that we were able to finish it. It was ‘Q’ down there in the fourth quarter and Daniels having a terrific game coming off the bench. He gave us terrific energy and knocked down some shots.”

But Foxboro was not finished.

Borde defied the Bombardier defense, driving to the basket for his seventh field goal, and fellow senior Donald Rogers knocked down a trifecta with 32 seconds remaining to cut the margin to 4 points.

But twice the Warriors missed shots in the waning seconds.

“We held for a while, but obviously we don’t have a lot of size,” Foxboro coach Jon Gibbs said of contending against Charles. “We had to be creative in how we double-team and get help down low on Q. When you do that, you’re taking some chances and that leaves some shooters open, and Daniels stepped up.”

“We tried to take away the 3-point line from Ciccio and Callahan,” Gibbs added. “When you’re playing against a team as talented as Attleboro, you’ve got to pick your poison a little. We did a lot of good things, we attacked them fearlessly going to the rim, we competed defensively, we played well enough to win.”

The Warriors entered the game after two terrific wins, beating Oliver Ames by 14 points and Stoughton by 18 points. Only Franklin (at 51.3 points allowed per game) presented a better defensive profile than Foxboro in the Hockomock League.

“I was proud that we didn’t quit — it was tied at halftime, tied after the third quarter,” Gibbs said. “Then we fell behind by eight and could have gone away, but we kept scrapping. We kept fighting, we gave ourselves a chance.”

It was a tug-of-war throughout the first half, and the Bombardiers and Warriors were deadlocked at 28 by intermission. Foxboro created a 12-point (19-7) first-quarter lead by hitting eight of 15 shots from the floor. In that session, Gallagher hit two 3-pointers and grabbed four rebounds, while Borde fashioned five points, three rebounds and three assists.

Attleboro held merely a two-point lead twice, both times during the second quarter. The Bombardiers resurrected their offense by shooting seven-for-nine from the floor with five players contributing points — eight from the hand of Ciccio — while Charles added a three-point play and Jason Weir tallied five points.

Foxboro’s defensive intensity right from the outset resulted in the Bombardiers shooting horribly (2-for-12) in the first quarter, misfiring on eight of their first nine shots and being limited to four points over the first six minutes.

During the third quarter, Foxboro’s largest lead was four points (40-36), while AHS held the lead just twice, both by two-point margins. Hughes was explosive for the Warriors, scoring 11 points, including a three-point play off of a Will Morrison feed, while the latter nailed a trifecta to present Foxboro with its biggest margin since the first quarter.

“I told the boys I was really proud of them,” Gibbs said. “A couple of shots rolled off (the rim) at the end. If we continue to play like that we’ll be fine.”