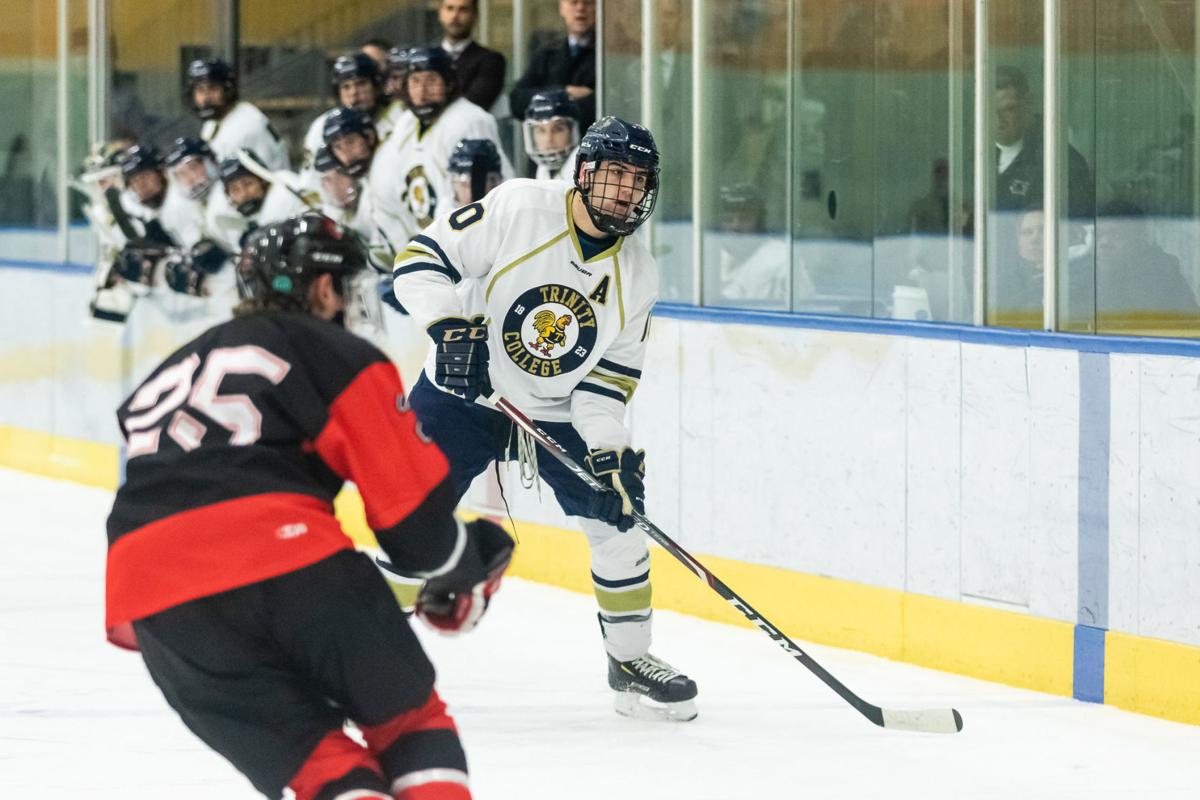 Foxboro’s Liam Feeney, a senior at Trinity College, was among the elite list of players from 21 colleges throughout New England to be nominated for the 20th annual Joe Concannon Award, one of eight defensemen in the field of candidates. 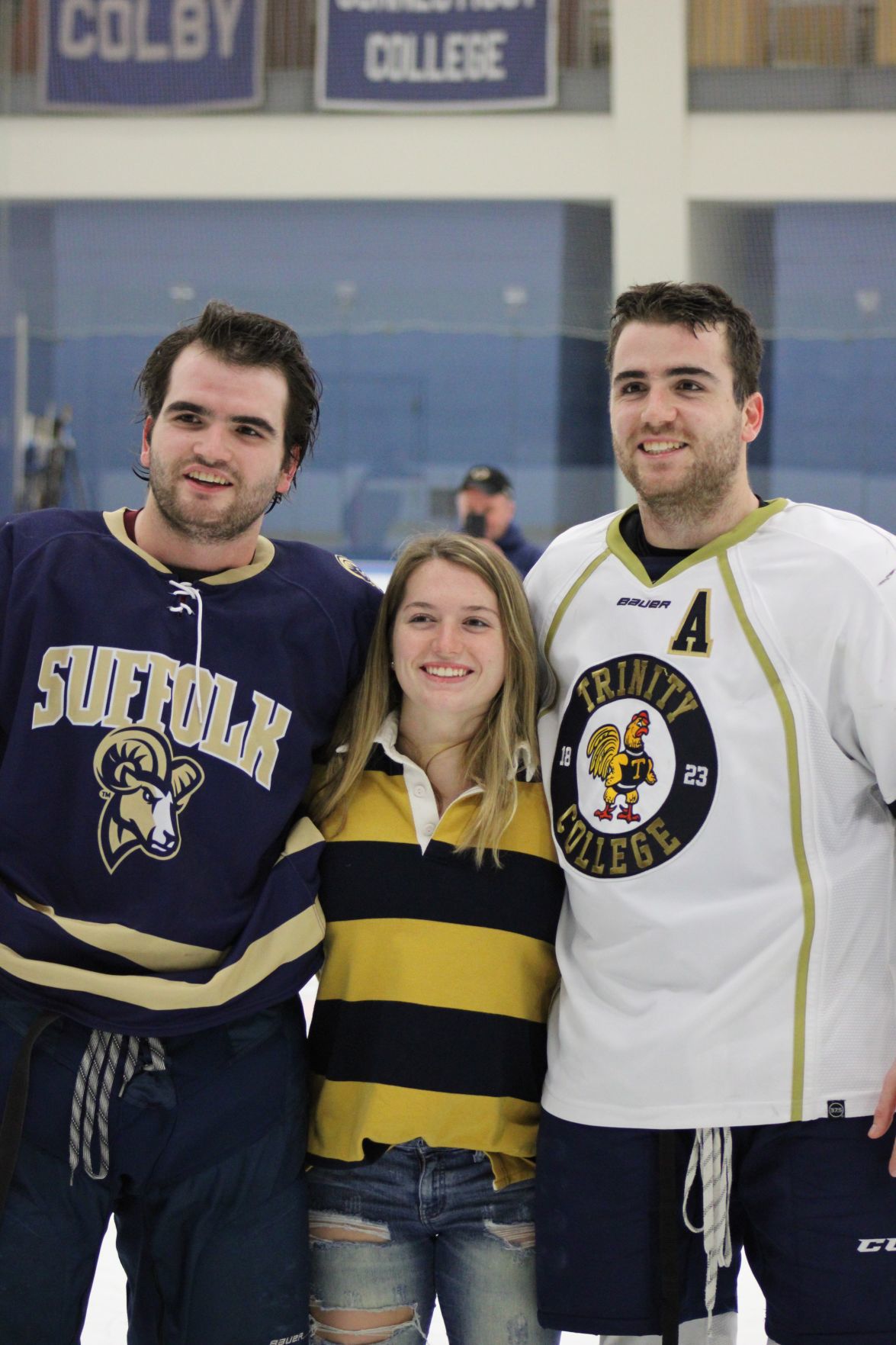 Liam Feeney, who was nominated for the Joe Concannon Award for his play at Trinity College, (right) poses with his younger brother Joe, who attends Suffolk University, and his sister Lily, a senior at Phillips Andover Academy who will attend Holy Cross in the fall.

Foxboro’s Liam Feeney, a senior at Trinity College, was among the elite list of players from 21 colleges throughout New England to be nominated for the 20th annual Joe Concannon Award, one of eight defensemen in the field of candidates.

Liam Feeney, who was nominated for the Joe Concannon Award for his play at Trinity College, (right) poses with his younger brother Joe, who attends Suffolk University, and his sister Lily, a senior at Phillips Andover Academy who will attend Holy Cross in the fall.

It is quite an honor, to be nominated as the best American-born NCAA Division II-III hockey player in New England — for the third straight season no less.

But that’s something Foxboro’s Liam Feeney, the senior defenseman for the nationally ranked Trinity College men’s hockey team, can lay claim to, and deservedly so.

Feeney was among the elite list of players from 21 colleges throughout New England to be nominated for the 20th annual Joe Concannon Award, one of eight defensemen in the field of candidates.

He was nominated for the prestigious award (the New England version of the Hobey Baker Award) as a sophomore and as a junior as a member of the Trinity hockey program.

“It’s pretty special to get nominated for the award. It’s a pretty unique award that not many people get chosen for,” said Feeney, a major reason Trinity has appeared in four straight NESCAC championship games.

“I’m pretty honored to be nominated for the third year in a row — I like to think I did some good things on the ice to help my team win. I’m pretty lucky to have that happen.”

(Wesleyan University forward Walker Harris was the recipient of the 2020 Concannon Award.)

Trinity compiled a 19-7-1 record overall, including 12-5-1 in the NESCAC, and ended the campaign ranked No. 7 nationally after being ranked No. 1 in late January. Feeney contributed three goals and 15 assists — the fourth straight season he totaled double-digit assists.

Through his 113 games with the Bantams, donning jersey No. 10, Feeney accounted for 12 goals and 64 assists — having a single season career-best 17 assists as a freshman.

“It didn’t matter in the long run as all the games got canceled,” Feeney said of the Bantams hoping for an “at-large” berth to the field for the NCAA Division III Tournament. “We were hoping that would be the case, it’s nice to have some closure — not what we wanted, but that’s how it goes.”

The Dexter School (Brookline) product is now back home and has resumed his second semester studies online as an economics major.

Feeney was a regular visitor to the Foxboro Sports Center as part of the South Shore Kings’ program.

He also played with the Austin, Minn. Bruins in the North American Hockey League before setting foot on the Trinity campus.

“We definitely expected a lot out of our team,” the 6-foot-2, 210-pound Feeney said of the Bantams’ preseason analysis. “We had a little bit of a tough stretch in late January and February. We had the pieces to get there (NCAA Tournament), but we fell a game short in the conference (NESCAC) championship.

“Overall it was a very good season, we had a lot of good players, the NESCAC Player of the Year (forward Barclay Gammill),” Feeney said. “It was successful, even though we didn’t get the success we wanted.”

Feeney was one of five Bantams to received All-NESCAC acclaim as Trinity limited 14 of its foes to two goals or less.

In Williamstown, it was Feeney who propelled the No. 2 seeded Bantams into the NESCAC title game for the fifth consecutive season, scoring two goals, including the game-winner with 14 seconds left to upstage No. 3 seeded Hamilton.

“I definitely think the captains (himself included) anchored the team,” Feeney said, thanking his teammates for his being nominated for the Concannon Award. “We kept the team in check. There were times when guys were playing well. You try to keep a good balance, keeping people accountable and also letting them know that they’re doing their job.”

As a junior Feeney anchored the Bantam blue line, which was the NESCAC leader in scoring defense, the fourth best (1.90 goals against per game) figure nationally among all Division II-III schools. Trinity won 19 games last season as well and was ranked as high as No 6 nationally.

Twice, during his freshman and junior seasons, he led the Bantams into NCAA Tournament competition.

“I’m lucky that I’ve been on successful teams for four years,” said Feeney. “I’ve played in over 100 games and the team has won almost 80 (78) games.” The Bantams lost just 24 of the outings he has been on the ice for.

As a senior, Feeney helped the Bantams to 19 wins in his fourth season on defense. Trinity won its first seven games but suffered a four-game losing skid from Jan. 24-Feb. 1. The Bantams then won seven of eight games in February and early March.

“Liam is a special player, the type that only comes around once in a while,” said Trinity coach Matt Greason. “He played over 25 minutes a night and in all situations. His hockey IQ and sense in every situation is among the best I’ve ever coached.

“Couple his sense with his overwhelming size and strength, and you have a dominating college hockey player. And that is exactly what we had for every one of his 113 (out of a possible 113) games he played in the Bantam uniform.”

At the NESCAC Tournament, the Bantams were humbled 7-2 by Wesleyan — despite scoring an early first period goal and having a 40-27 edge in shots. The setback, however, derailed the Bantams’ hopes for an at-large bid for the NCAA Tournament.

Trinity reached the NESCAC Championship for the fifth consecutive season, coming up short for the first time since 2017-18. They were the runner-up for the fourth time in program history.

It was Feeney who sent the Bantams into the title tilt against No. 3 seeded Hamilton. In the semifinal round, Feeney scored the go-ahead goal for Trinity at 12:15 of the second period on a power play and the game-winning goal in the final minute of regulation. Feeney, who had scored just one goal through the first 25 games of the season for the Bantams, helped Trinity to a 3-2 victory, scoring on two of his three shots in the game.

“Trinity has had a lot of success on the ice. I was happy to get in there (as a freshman) do to everything that I could,” Feeney said of his four seasons of contributions. “Obviously, hockey does end and Trinity has great networking connections. That was really special.”

As a junior, Feeney served as the Bantams’ assistant captain and played in every game, anchoring a blue line that led the NESCAC in goals against (1.71 per game), which was the fifth best figure nationally. Trinity, with a 16-game unbeaten skein, advanced to the regional round of the NCAA Tournament, losing a one-goal decision to the University of New England.

In addition, Feeney ranked No. 4 among all NESCAC defensemen in scoring and ranked No. 2 among all Bantams for assists, having two assists, one on the game-winner in a 2-1 victory over Hamilton in the NESCAC Tournament semifinals.

Off the ice, Feeney organized one of the largest fundraising efforts in NCAA Division III hockey when the Trinity hockey program’s friends and family raised over $52,000 towards breast cancer awareness and treatment. “Liam created the idea for the program and helped organize means to generate donations through a a gofundme page, memorabilia sales, silent auction and raffles,” Greason said.

Feeney received All-NESCAC first team acclaim as a sophomore, while also being named to the New England Hockey Writers Division II/III All-Star Team and being selected as a semifinalist for the Concannon Award. He ranked No. 1 among all Bantam defensemen in scoring, was No. 2 on the team scoring list.

Feeney anchored a Bantam defensive unit that season that ranked No. 3 nationally in goals against (1.68) per game, the best figure in NESCAC. In addition, he was the recipient of the Dunham Award for devotion to the team.

During his freshman year in Hartford, Feeney was selected to the U.S. College Hockey Online Division III All Rookie Team, playing in every game and ranking No. 4 on the team with assists. That season, he scored a goal and assisted on the game-winner in overtime in Trinity’s 3-2 victory at Hamilton in the NESCAC Finals. Then he helped set up the game-tying goal in Trinity’s 2-1 victory over Endicott in the NCAA quarterfinals and assisted on Trinity’s lone goal in the NCAA Division III Championship game against Norwich.

“It went by real fast,” Feeney said of his four years. “Academically and athletically, NESCAC is high (in terms of standards).

“It was a good fit. Hockey had been successful there for many years, they won the national championship in 2015.

“Right of the bat, there was an outstanding leadership group with the seniors,” Feeney said of his freshman season. “It was to be the best player that you can be when you step on the ice. It was not a culture shock. But, it was a work ethic I had not seen before in junior hockey or high school hockey — everyone, every day put in the best effort that they could.

“When I got there and started playing, I just wanted to make the simple plays — I was never the flashy player. Making smart plays, moving the pucks to the forwards, not trying to do too much. I bottled that for four years and it worked pretty well for me.”

Feeney’s dad, Bill, played hockey at the Kent School (Maine) and at Merrimack College. His sister Lilly (“She’s the goal-scorer!” her brother says) is an All-NEPSAC hockey player at Phillips Andover Academy and headed to Division I Holy Cross in Worcester.

Feeney’s brother Joe is a sophomore forward with the Suffolk University hockey team, another product of the Foxboro-based South Shore Kings program.

All the while, mom Paula has served as Team Feeney chauffeur, cheerleader and life skills coach, in addition to being the head of hockey tournament operations at the Foxboro Sports Center.

A lifelong Boston Bruins’ fan, Feeney followed his dad’s skates onto the ice and also played lacrosse at Dexter.

Notably, Feeney has had three pairs of skates during his days at Trinity College and must have used over 40 hockey sticks.

“I think definitely I was able to make plays, to take care of the D (defensive) zone first,” added Feeney. “That was my job, to make sure that the puck got out of there. I’m a bigger guy, so I tried to dominate the corners.

“There was the jump in the talent level for me as a freshman, but playing junior hockey helped me transition. From my high school (Kings) to junior (Austin Bruins) career, my skating got better. I knew that when I got to college that I would have to skate harder and my vision and my work improved.

“I’m glad to have made my mark while I was there.”

Or, as Greason related, there might be future Bantams to wear jersey No. 10, but maybe none better than Feeney.

“Since he arrived on campus four years ago, he has shown great leadership qualities,” Greason said. “He is the type that always waits for the Zamboni doors to open before he would get on the ice, often the last to leave. He chased greatness every step of his college career.”