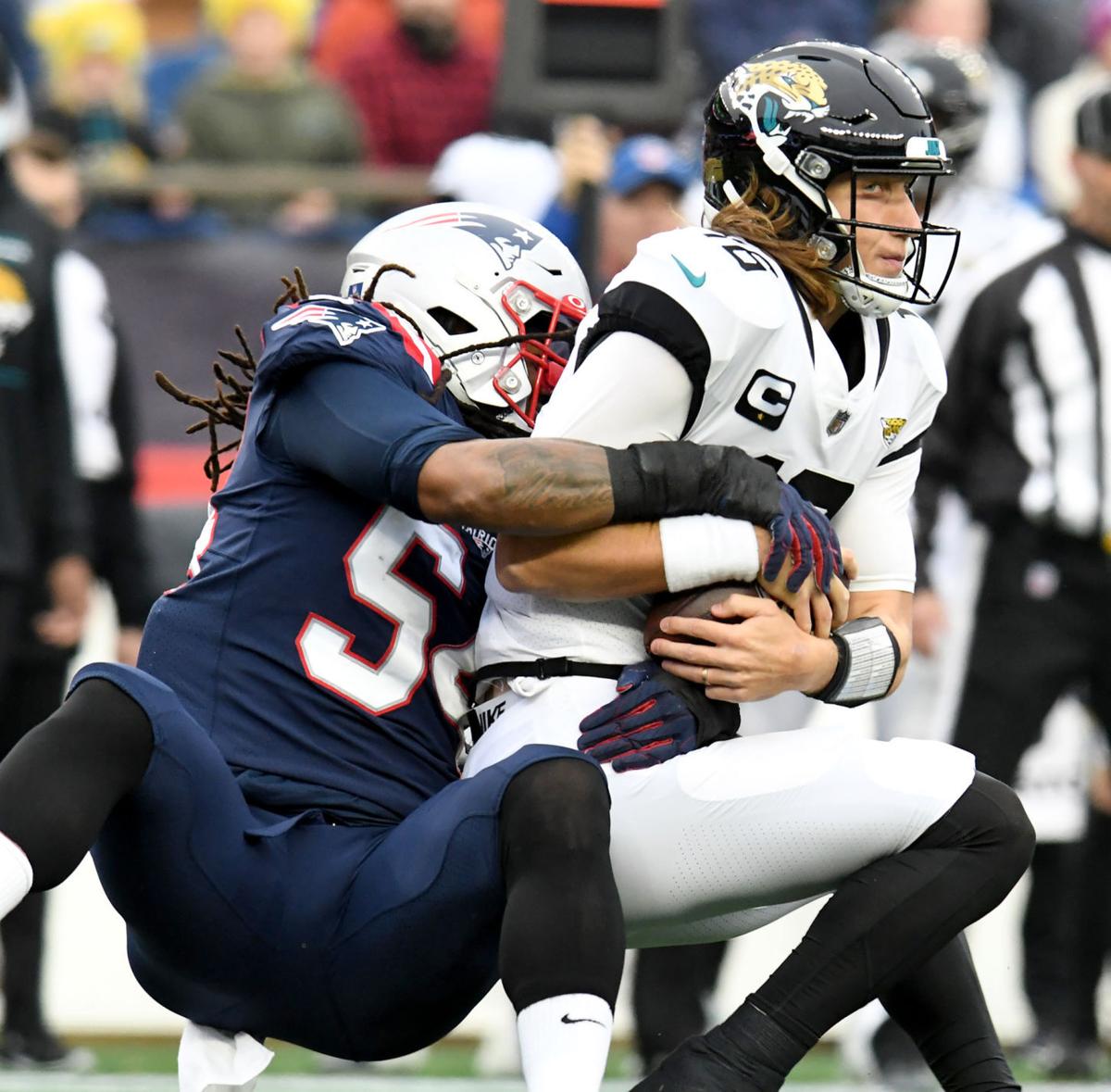 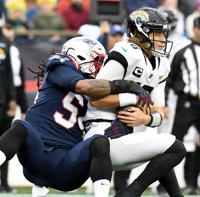 Jaguars QB Trevor Lawrence is sacked by Patriots linebacker Dont’a Hightower at the Jags’ 23-yard line for a loss of nine yards early in the first quarter of Sunday’s game at Gillette Stadium. 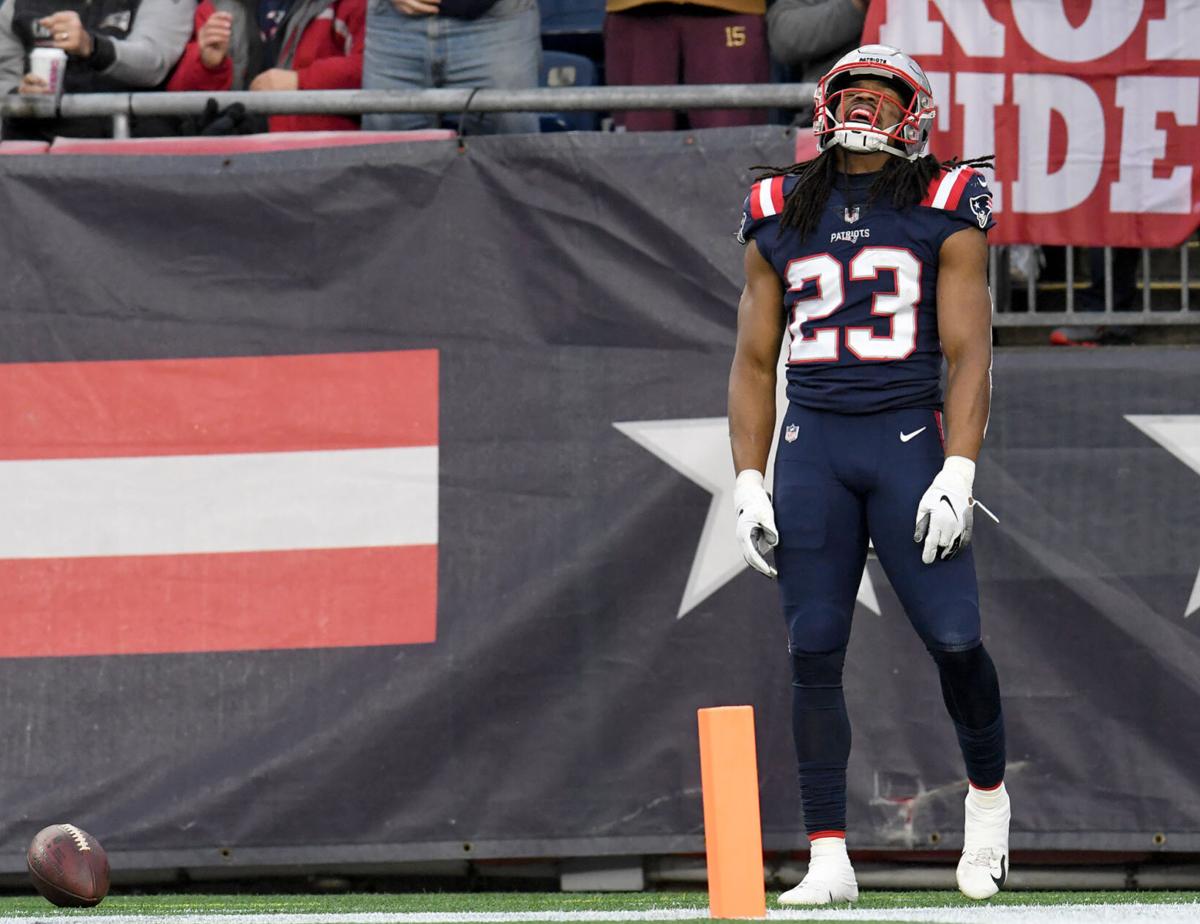 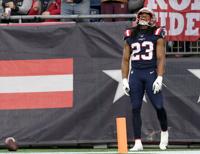 Patriots defensive back Kyle Dugger celebrates after intercepting a pass by Jaguars quarterback Trevor Lawrence late in the third quarter and returning the ball to the Jacksonville 1-yard line Sunday at Gillette Stadium.

Jaguars QB Trevor Lawrence is sacked by Patriots linebacker Dont’a Hightower at the Jags’ 23-yard line for a loss of nine yards early in the first quarter of Sunday’s game at Gillette Stadium.

Patriots defensive back Kyle Dugger celebrates after intercepting a pass by Jaguars quarterback Trevor Lawrence late in the third quarter and returning the ball to the Jacksonville 1-yard line Sunday at Gillette Stadium.

FOXBORO — The New England Patriots are assured of at least two more games: Sunday in Miami and than an AFC playoff game.

To assure themselves of a chance for success, the Patriots’ defense will hopefully factor into the winning equation.

“That’s a winning ingredient right there is what we call “complementary football,” Patriots coach Bill Belichick said in the aftermath of New England producing points off of its three interceptions in a 50-10 blowout of Jacksonville Sunday at Gillette Stadium. “When the defense or the special teams can make a play to set up one of the other units, whether it be a turnover on defense, a good field-position play by the kicking game, on a return for the offense, or on a coverage play for the defense, is for that next unit to go in there and be able to take advantage of it.”

“The complementary football yesterday from the defensive turnovers, the offensive touchdowns, that’s winning football,” Belichick said Monday. “You want to be able to take advantage of those opportunities offensively.

“The flip side to that would be a good coverage play by the kickoff or punt team and then the defense going in there, taking advantage of that field position and getting the ball back for the offense around midfield or in plus territory — that type of situation.

“It’s important for those units to work together to complement each other and, when that happens, usually good things happen,” Belichick added. “We certainly want to try to emphasize that aspect of complementary football.”

According to linebacker Kyle Van Noy, “It comes down to who is going to play the best in January. It doesn’t matter what you do in the regular season as long as you get your chance into the tournament.”

With 10 wins, the Patriots are likely to be a No. 4, 5 or 6 seed for the AFC playoffs and face a first-round road game. If New England wins at Miami Sunday and the current top seeds in the AFC all lose, the Patriots could be a No. 1 seed mathematically with tiebreakers

Defensive lineman Deatrich Wise believes it was Belichick and the coordinators who masterfully “refocused” the team after losing to Indianapolis and Buffalo, specifically the defense.

“Making sure everyone was focused on the task at hand,” Wise said.

Playing against a rookie QB such as Lawrence or even a second-year QB like Miami’s Tua Tagolvailoa almost plays into the hands of the Patriots’ defense and a schemer like Belichick.

“Playing under Bill Belichick and knowing how he goes into every week is always a challenge for a quarterback,” Van Noy said. “You’ve heard veteran quarterbacks say that throughout the years even to Tom (Brady). I can’t imagine being a rookie and facing the Patriots’ defense.”

Defensive back Kyle Dugger, who had one of Sunday’s interceptions, said of the team defense concepts, “We just did our jobs and the results show. So we were able to help the offense by playing defense.”

“Everyone really cares about football and one another,” Phillips said. “They are not just out there to do a job, so to speak, they are out there playing for one another and you can just feel the difference.”

Added record-setting defensive back J.C. Jackson, “We created three turnovers. That’s good ball on the defensive side of the ball. They couldn’t score, so it felt like we did a hell of a job on defense.”

Jackson had nine interceptions last season, No. 3 on the Patriots’ all-time single-season list behind Ron Hall (11 in ’64) and Asante Samuel (10 in ’06). Jackson has eight aerial thefts this season (eight last season), moving ahead of Ronnie Lippett and Nick Buoniconti, both with 24, into the No. 9 spot on career pass interceptions (25), two behind Maurice Hurst.

The Dolphins won first this season with a season-opening 17-16 decision over the Pats in Foxboro.

“It’s true, on any given Sunday, anybody can win,” Wise said, noting that New England has many new parts on the defense, with Matt Judon coming over from Baltimore, Van Noy coming back from Miami, Jamie Collins coming back from Cleveland, among others.

“We have great leaders (captains Devin McCourty, Matt Slater) who help us remain unfazed,” Wise said. “A lot of guys have played a lot of ball here, so it doesn’t matter what happened the week before — good game or bad game. We have to continue what we’re doing, focus on technique and fundamentals — prepare as best we can on the field and off.”

NOTES: Kicker Nick Folk scored eight points with five extra points and a field goal against Jacksonville to move past Randy Moss (302) and Ben Coates (302) into eighth place on the Patriots’ all-time scoring list … Matthew Slater appeared in his 205th game as a Patriot, overtaking kicker Stephen Gostkowski and trailing only Tom Brady (285), Bruce Armstrong (212) and Julius Adams (206). At Gillette Stadium, Slater has played in 102 games, second only to Brady (134) … RB Damien Harris’s 14 rushing TDs this season tied Curtis Martin (’95 and ’96) for the second-most in a single season … The Patriots reached 20 rushing touchdowns in back-to-back seasons for the first time in team history. The Patriots’ 1978 team had a single-season record 30 rushing TDs … QB Mac Jones completed at least 70 percent of his passes for the ninth time against the Jags to join Dak Prescott (2016 with Dallas) for the most games by a rookie quarterback with a 70-percent completion percentage. Jones completed 22-of-33 passes for 73.3 pass-completion percentage … Keeping tackle Trent Brown healthy and on the field has been a plus. “He’s long, tall, runs well and covers a lot of ground,” Belichick said. “A couple strides and he eats a lot of ground. It’s been good to have him back. It’s changed a lot of things, offensively, for the better. He’s been a really, really solid player for us in the running game and the passing game” … New England won its 10th game of the season for the 27th time in team history, the 22nd time under Kraft’s ownership, and the most by an NFL franchise since 1994 … During the fourth quarter, the Patriots rested center David Andrews and moved Ted Karras to that spot, Yasir Durant to right guard, Mike Onwenu to left guard and Justin Herron to left tackle.