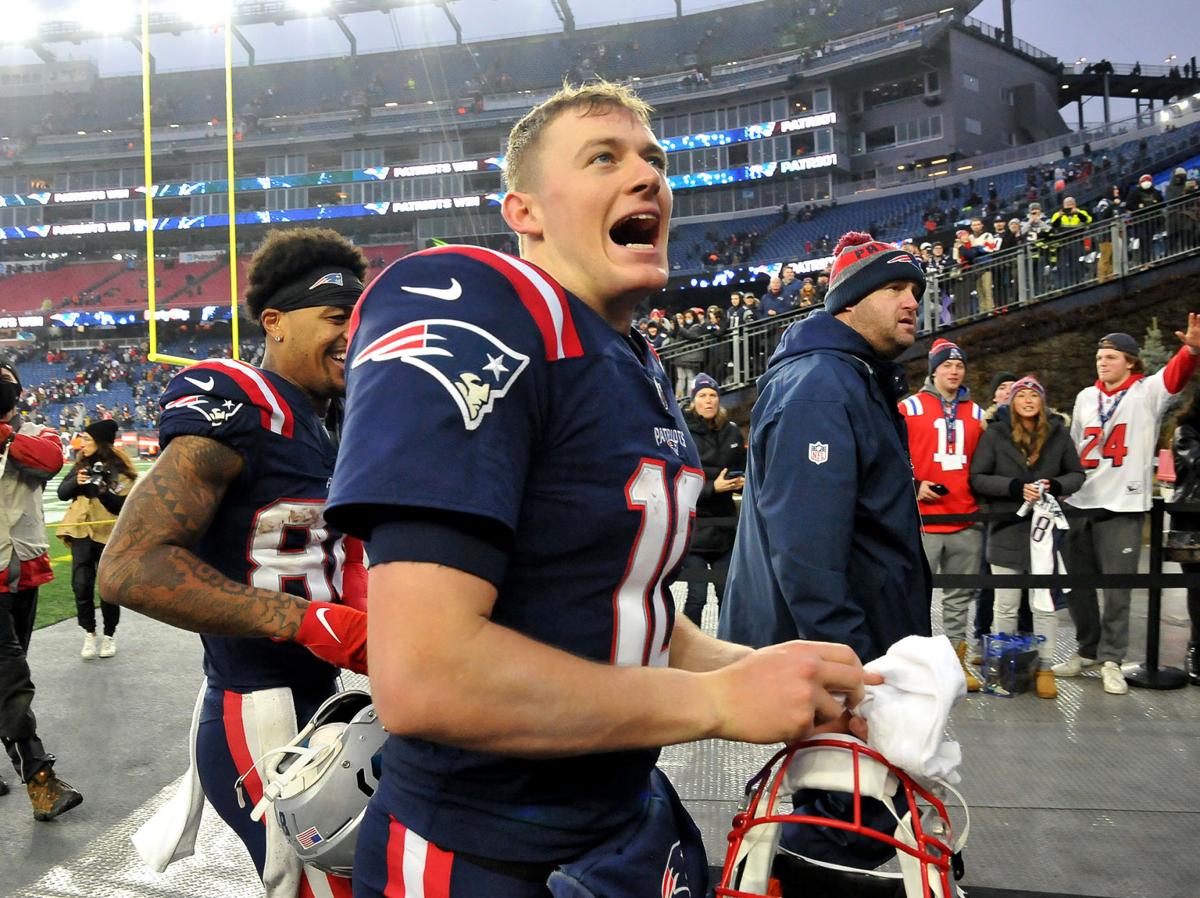 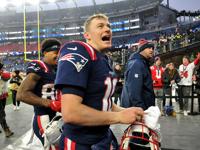 What will 2022 hold for Mac Jones and the rejuvenated New England Patriots? 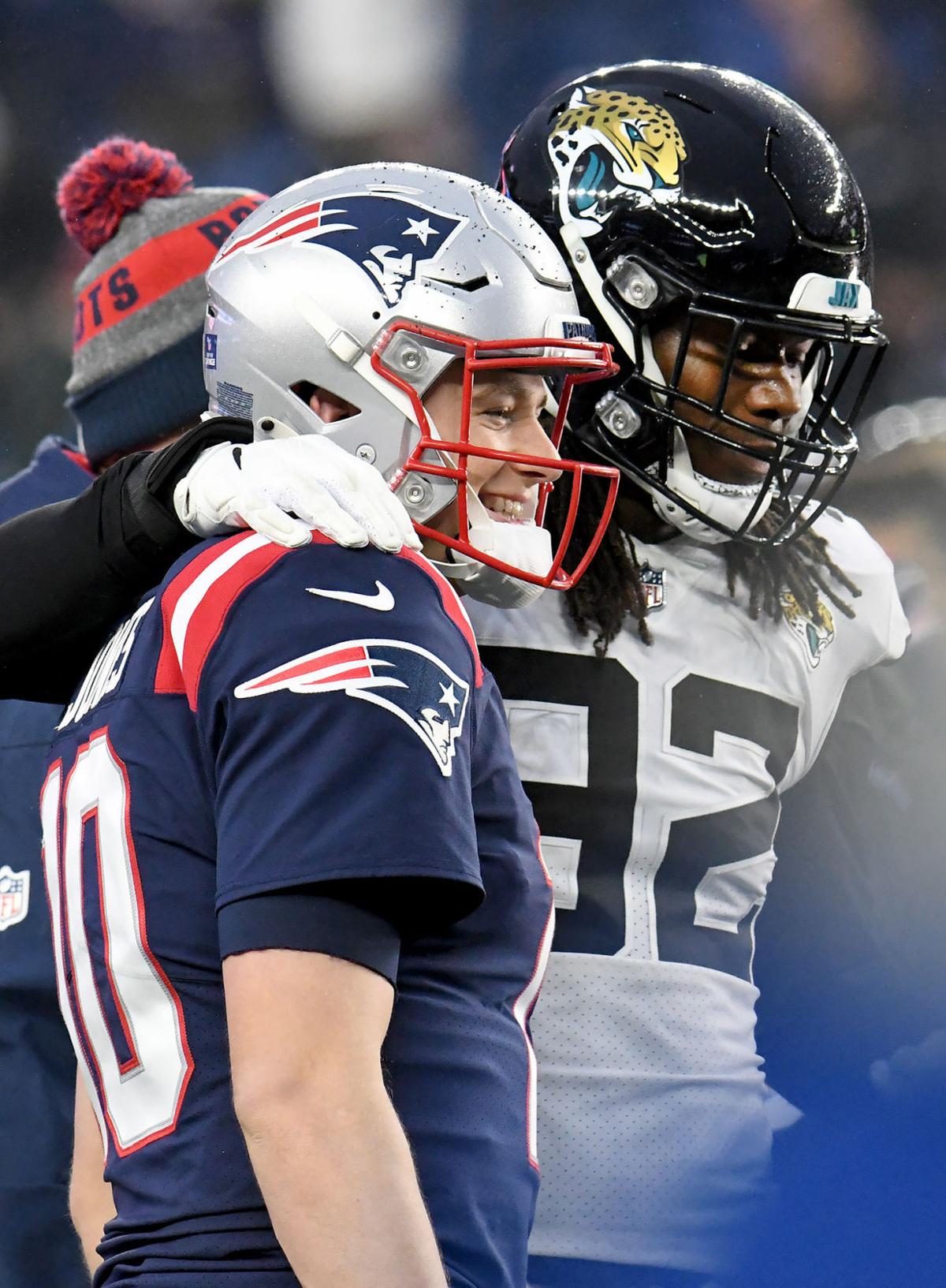 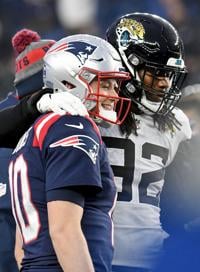 Patriots quarterback Mac Jones, left, shown meeting up with his former Alabama teammate, Jordan Smith of the Jacksonville Jaguars, at the end of Sunday’s game in Foxboro, is probably hoping that the Pats are planning to select some high-profile receivers in the NFL Draft in late April.

What will 2022 hold for Mac Jones and the rejuvenated New England Patriots?

Patriots quarterback Mac Jones, left, shown meeting up with his former Alabama teammate, Jordan Smith of the Jacksonville Jaguars, at the end of Sunday’s game in Foxboro, is probably hoping that the Pats are planning to select some high-profile receivers in the NFL Draft in late April.

Last week, we did a year in review for the area’s five pro teams. This week, we’ll look ahead at what we can perhaps expect, on a monthly basis, for the calendar year 2022 in the wide, wide world of sports.

Happy new year! Things got underway in 2022 with Week 17 of the NFL season, and luckily, Patriots fans didn’t have to face the prospect of their beloved team losing to the hideous Jaguars last Sunday, thereby making Week 18 on the road against the Dolphins in the regular-season finale a must-win for their postseason hopes. Wild-card weekend will begin Jan. 15-16, and the Patriots will likely be on the road to open the postseason, very possibly in Buffalo.

The Bruins returned to the ice on New Year’s Day after the league’s lengthy COVID hiatus, and were poised to play eight games in a span of 13 days, which will really test the team’s mettle as the B’s try to get back into the playoff hunt. As it stands right now, Boston is barely in as far as the playoff field goes, but we’re only a third of the way through the season.

After shocking the 27-7 Phoenix Suns on New Year’s Eve, the Celtics will have a chance to get back to or above .500 with a string of games against teams with losing records, including contests against the Magic, Knicks, Pacers, and Spurs.

For Red Sox fans, Jan. 20 should be circled on the calendar, because that’s the day that the new Baseball Hall of Fame class is announced, which will likely include local legend David Ortiz, though it could be disappointing for some fans if Sox alum Roger Clemens is not selected for enshrinement in his final year of eligibility — and the same goes for Curt Schilling.

Of course, the highlight of the month will be Super Bowl Sunday, which will take place the latest that the big game ever has, on Feb. 13, which is a week later because of the extra week of NFL games played this past season. Expect the Chiefs to reach their third straight Super Bowl, only this time taking on the Aaron Rodgers-led Packers.

Otherwise, the Winter Olympics in Beijing will open on Feb. 4 for the 16-day cavalcade of skiing, skating, ice hockey, bobsledding and luging.

But perhaps the biggest non-Super Bowl event of the month will be the state of the negotiations between Major League Baseball and the Players’ Association. If an agreement cannot be reached during the course of the month, and ideally by the middle of February, then spring training and the actual start of the season could very well be in jeopardy.

Ideally, MLB spring training games will dominate the news, along with the final weeks of the NCAA college basketball season, culminating with the onset of March Madness beginning on March 13-14.

If all goes as hoped, Opening Day for the 2022 baseball season will see all 30 teams in action on March 31, including the Red Sox hosting Tampa Bay for three games at chilly Fenway.

At 6-6, it’s hard to imagine that Boston College’s men’s basketball team will qualify for the NCAA tournament, but our neighbors to the south, Providence College, are off to an impressive 13-1 start and are ranked No. 16 nationally. Keep this up, and the Friars will be dancing in March.

The New England Revolution will open their season on March 5 as it looks to defend their regular-season Eastern Conference title.

And finally, the last games that will determine the 32-team soccer World Cup field will be played later in the month, with the US men’s team likely to have already clinched a spot in the exclusive tournament, to be held in Qatar in November-December.

Arguably the most exciting month, sports-wise, on the entire year’s calendar.

Baseball will kick into gear, with the Sox hosting Baltimore and visiting the Bronx for their fourth through ninth games.

The NCAA men’s and women’s hoops tournament will stage their Final Fours in New Orleans and Minneapolis, respectively.

The tradition like no other, the Masters, will be staged at beautiful Augusta National from April 7-10.

The World Cup soccer draw will be announced on April Fool’s Day.

The NBA’s play-in games will begin on April 12 for the four teams that sit in the seven through 10 spots in each conference at the end of the regular season. Right now, it seems likely that your Boston Celtics will be part of this dubious mini-tournament for the second straight season, and if they’re not, then it means that either things really turned around for the better at some point during the season, or the tailspin in which the team is currently enmeshed has continued, resulting in a non-playoff season and a likely lottery pick in the NBA draft. If the C’s do win their play-in tourney game, their season will still be on the precipice of a quick departure when they take on Brooklyn or Milwaukee in the opening round of the playoffs.

After that, don’t be surprised if the Celtics’ Stevens ends up back as a college or NBA head coach again, with further significant shakeups within the organization also likely.

The NFL Draft will take place the final weekend of the month, and don’t be surprised if Bill Belichick & Co. choose to make drafting a top-notch receiver — not the N’Keal Harry type — a priority when their first-round pick comes along.

And for those interested in men’s college hockey in these parts, be aware that Boston’s TD Garden will host the sport’s Frozen Four April 7-9.

The Kentucky Derby will be run at Churchill Downs in Louisville the first Saturday of the month, and golf’s second major tournament of the year, the PGA Championship, will take place on May 19-22 in that noted golf hotbed, Tulsa, OK.

The Stanley Cup playoffs begin in earnest on May 2, and who knows if the Bruins will be in the mix here? More importantly for Bruins fans, if Boston is not part of the 16-team field, then all eyes will be on team captain Patrice Bergeron, who is in the last year of his contract and may be mulling retirement as he approaches his 37th birthday after an 18-year career in black and gold.

Baseball, barring the aforementioned labor strife, rolls merrily along into the summer months, and the NBA Finals open on June 2 pitting, let’s say, Brooklyn against the Warriors or Suns.

On a somewhat-parallel track, the Stanley Cup playoffs will be winding down toward the end of the month, and the Tampa Bay Lightning will perhaps be trying to nail down their third straight Cup, but may have to roll through a strong Hurricanes or Florida Panthers teams en route. In the Final, Vegas, St. Louis, and surprising Minnesota could provide the Western-Conference opposition.

Wimbledon will be staged at the All England Club outside of London later in the month, but the biggest event around these parts will be at the Country Club in suburban Boston, as Tom Brady’s former neighborhood course will host the U.S. Open June 16-19.

Part two of this 2022 preview, including the months of July through December, will appear in this space next week. In the meantime, I wish my faithful readers a happy and prosperous new year!