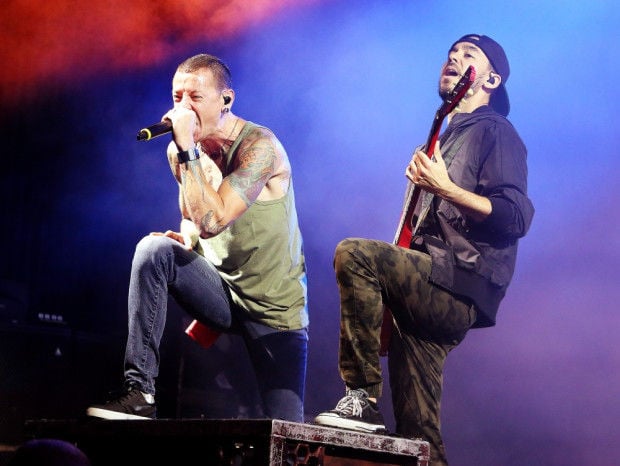 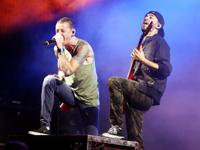 Chester Bennington, from left, and Mike Shinoda of the band Linkin Park perform during their "Carnivores Tour 2014" at the Susquehanna Bank Center on Friday, Aug. 15, 2014, in Camden, N.J. (Photo by Owen Sweeney/Invision/AP) 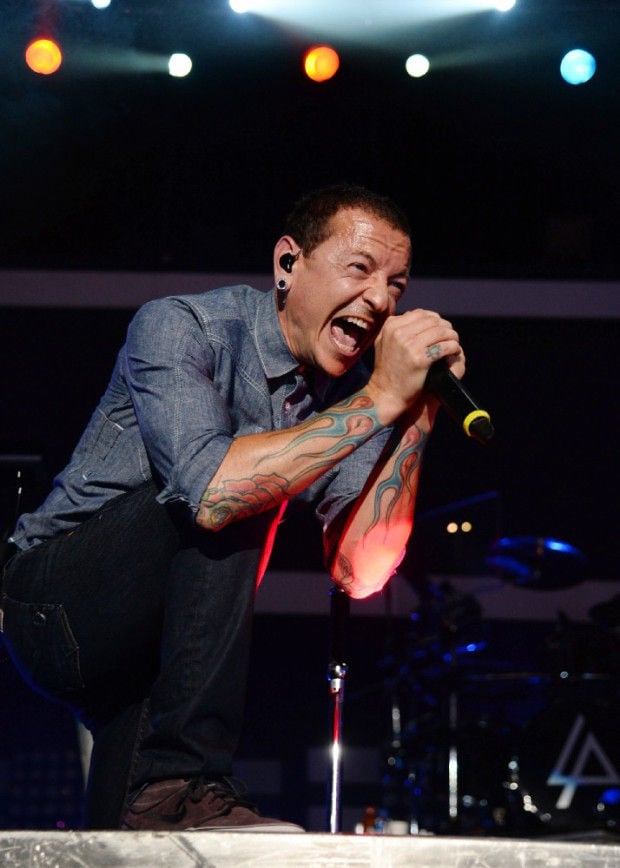 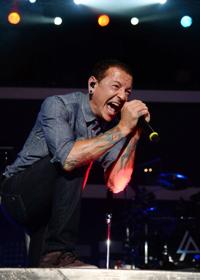 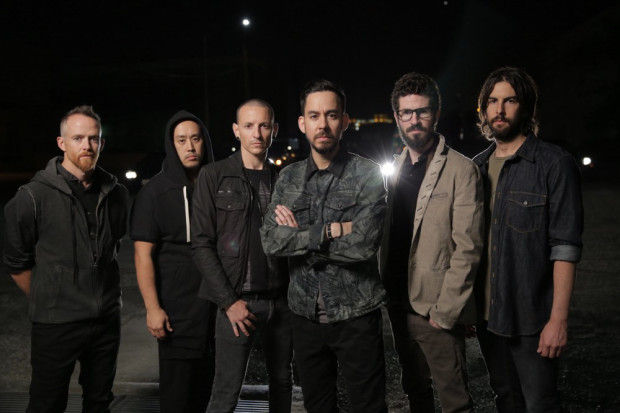 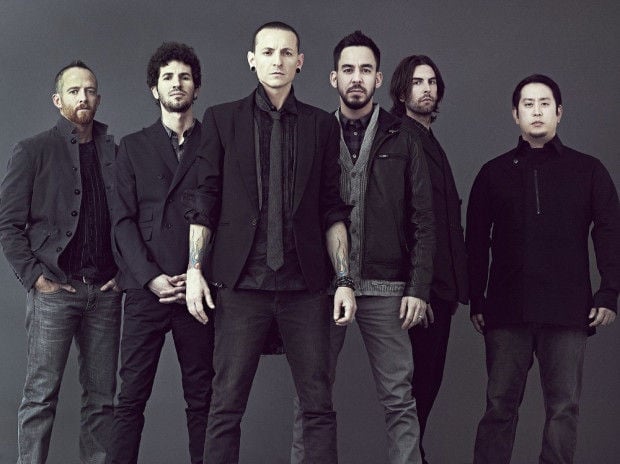 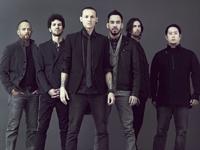 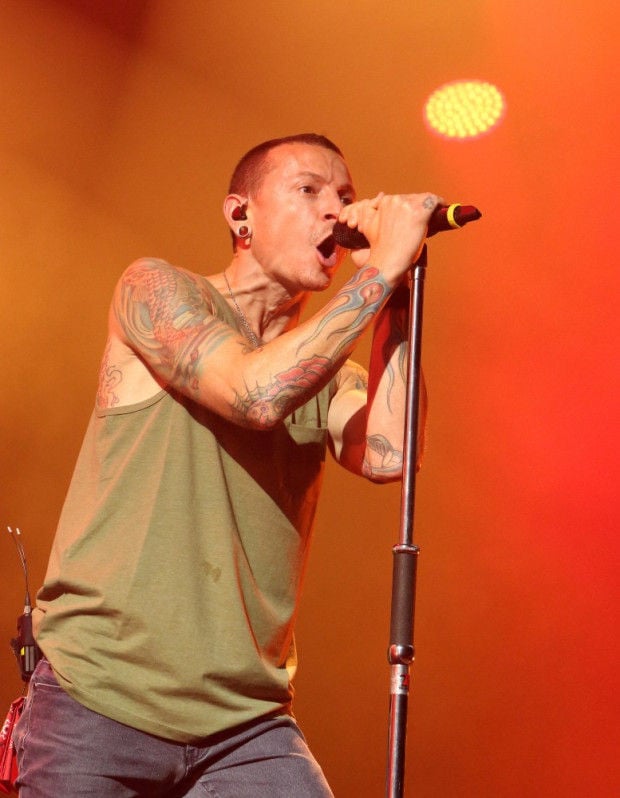 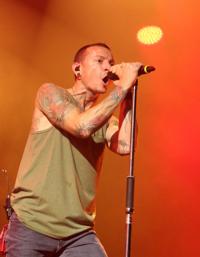 Chester Bennington of the band Linkin Park performs in concert during their "Carnivores Tour 2014" at the Susquehanna Bank Center on Friday, Aug. 15, 2014, in Camden, N.J. (Photo by Owen Sweeney/Invision/AP)

Chester Bennington, from left, and Mike Shinoda of the band Linkin Park perform during their "Carnivores Tour 2014" at the Susquehanna Bank Center on Friday, Aug. 15, 2014, in Camden, N.J. (Photo by Owen Sweeney/Invision/AP)

Chester Bennington of the band Linkin Park performs in concert during their "Carnivores Tour 2014" at the Susquehanna Bank Center on Friday, Aug. 15, 2014, in Camden, N.J. (Photo by Owen Sweeney/Invision/AP)

MANSFIELD - Critics of Linkin Park's sixth and most recent album release "The Hunting Party" say it's the band's return to its edgy and in-your-face beginnings - a hard-rock, guitar-driven, Chester Bennington scream-laden reclamation if you will.

That begs the question: Did Linkin Park ever really get soft?

The band answered that question Saturday night with a resounding "hell no!" as Bennington & Co. blitzed through an intense, head-bobbing, 30-song set that featured only a select few new songs and just about every "hit" from the band's extensive catalogue that spans nearly 15 years worth of music.

Playing Mansfield almost exactly two years to the date of its last local appearance - Aug. 14, 2012, headlining with Incubus in support - Linkin Park took the stage after a solid effort by AFI and then a rousing performance by the Jared Leto-fronted Thirty Seconds to Mars. Linkin Park wasted no time with introductions and tore into its first cut from "The Hunting Party," the fist-pumping, anti-authority anthem "Guilty All the Same." The album version features a guest appearance by hip-hop legend Rakim, but Linkin Park co-vocalist Mike Shinoda, who's no stranger to freestyling, rattled off the rap verse with ease.

The angst-ridden "Given Up" was next, Bennington's scorching vocals rivaled in intensity only by guitarist's Brad Delson's heavy riffs. "With You" and "One Step Closer" were rattled off in succession before the band broke off into one of many shortened versions of songs, starting with "Blackout." While few, if any, of Linkin Park's songs go over the four-minute mark, several songs Saturday night were limited to one chorus and lacked the second verse. But by no means did this lessen the listening experience. If anything, it made for more songs on the setlist and allowed the band to hammer through hit after hit without letting up.

"Runaway" was sandwiched between two new tracks - "Rebellion" and "Wastelands" - before the band slowed things down a bit with a remixed version of "Castle of Glass." Then Bennington showed that his vocal range goes beyond his signature abrasive, throat-clenching screams as he melodically tackled a three-for-one version of "Leave Out All the Rest," "Shadow of the Day" and "Iridescent."

Whereas Bennington had the stage to himself for the aforementioned "ballads" - for lack of a better word - DJ Mr. Hahn (Joseph Hahn) had the chance to showcase his skills on the turntable with a no-pun-intended "Hahn Solo" that included remixes of various Linkin Park songs and samples from other artists. Hahn's mashup was a display for the eyes as well as the ears, as the dozen or so transparent video screens that had hung above the stage at the outset were lowered into place surrounding Hahn on one side of the stage and Rob Bourdon's drum kit on the other for what ammounted to a mini-laser show.

Favorites "Numb" and "Waiting for the End" led up to another new number, "Final Masquerade." The band closed its set with classics "Somewhere I Belong," "In the End" and "Faint" before the stage faded to black and feedback echoed. Shortly thereafter the band re-emerged to burn through a six-song encore that ended the night with the same intensity as it began with as an extended version of hand-clapping "Bleed It Out" wrapped things up. While thanking the crowd for its support and participation, Shinoda warned against leaving before the last song, saying "You don't want to miss it." And if you did leave, you missed a killer, skillfully-arranged drum solo by Bourdon as well as Bennington and Shinoda mingling amongst the fans in the first few rows while they sang.

The encore also included shortened versions of "Burn It Down," "Lost in the Echo," "New Divide," "Until It's Gone" and "What I've Done."

Certainly no knock on Linkin Park, but for what the band may have lacked in fanfare and audience interaction, Thirty Seconds to Mars more than made up for it.

Leto, probably more renowned for winning a Best Supporting Actor Academy Award for his role in "Dallas Buyers Club," was at his flamboyant best right from the get-go as he took to the stage with full beard and a white robe that may have been better-suited for a role in "Joseph and the Amazing Technicolor Dreamcoat." His several trips through the crowd included an acoustic solo performance of the band's new single "Alibi" as well as sing-along versions of "The Attack" and "The Kill."

Nary four songs into the set and the stage was covered in confetti and remnants of oversized balloons that were released during the band's opening number "Up in the Air" and extending into "This Is War." Make no mistake about it, Leto can sing. His a capella intro to "Kings and Queens" was spot on and the commercially-successful "City of Angels" was just as tight. Those songs were preceded by a band "selfie" for Instagram with the crowd as a backdrop.

Thirty Seconds to Mars wrapped up its set with another singalong as Leto pulled audience members to join in on stage (close to 30 or 40 people) as confetti again flew throughout "Closer to the Edge." The biggest surprise about the set was that it took about 10 songs for Leto, supposedly a favorite of the ladies, to take his shirt off, citing that he had "lost a bet" earlier in the day.

Opening the show was AFI, another hard-rocking California band that has been around since 1991, enjoying modest success over the course of 10 studio albums. The band's short warm-up set included fan-favorites "Girl's Not Grey," "Silver and Cold" and perhaps its biggest hit, "Miss Murder."

DANNY CRANDALL can be reached at 508-236-0395 or at dcrandall@thesunchronicle.com.