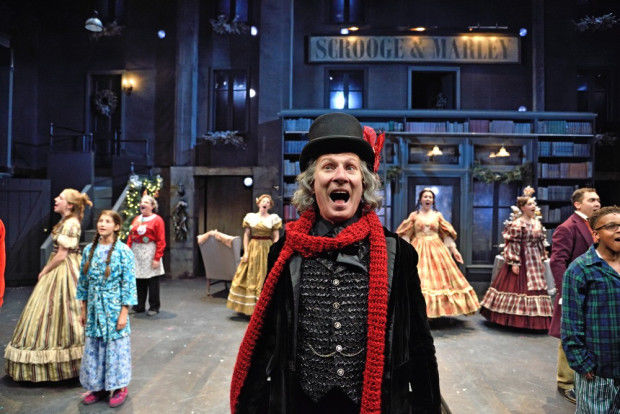 Brian McEleney as Ebenezer Scrooge with the ensemble of Trinity Rep's "A Christmas Carol." (Photos by Mark Turek) 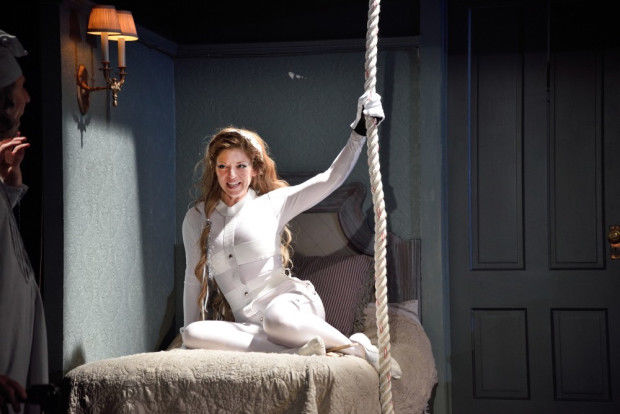 Rebecca Gibel as the Ghost of Christmas Past in Trinity Rep's "A Christmas Carol." (Photo by Mark Turek)

Brian McEleney as Ebenezer Scrooge with the ensemble of Trinity Rep's "A Christmas Carol." (Photos by Mark Turek)

Rebecca Gibel as the Ghost of Christmas Past in Trinity Rep's "A Christmas Carol." (Photo by Mark Turek)

PROVIDENCE - Trinity Repertory Company has been reinventing Charles Dickens' "A Christmas Carol" for nearly four decades, but this year's production is the mother of reinvention.

A new director, James Dean Palmer, is bringing a wonderfully original perspective to the tale of the miserly Scrooge and his redemption at the hands of the Ghosts of Christmas Past, Present and Future.

Dickens' message is unadulterated; in fact, this production brings out the elegance of the author's writing as his prose is performed as dialogue. But there is a new structure, some changes in the characters, and a sense of humor that leaves us feeling as exuberant as Scrooge when he wakes up on Christmas Day.

Palmer begins the tale not in Scrooge's cold office but with a warm scene of a family and a young son who begs his father to read from Dickens' book. As the story unfolds, however, those family members become characters in the book, and the transformation is plausible, as they decide who will play which roles, but at the same time, magical.

A hallmark of past productions has been Trinity's creative interpretations of the three ghosts, and after the hilariously abrupt arrival of the Ghost of Christmas Past, we couldn't wait to see what would come next. With a disco-dancing Christmas Present and an elusive Christmas Future - this year more waifish and pitiful than scary - Palmer doesn't disappoint.

The ghosts are just the start of the clever surprises and tweaks in the story, but it all works in hugely entertaining ways. It wouldn't be right to divulge everything, but let it be said that the solicitors for the poor, those well-intentioned souls who come to ask Scrooge for a donation, are far from sanctimonious; in fact, they're a hoot.

The cast is a mix of company members - Brian McEleney is a marvelous Scrooge - newcomers and Brown/Trinity master's degree students. Most actors appear in several roles, like Anne Scurria, who is wonderful as Jacob Marley and memorable as Old Jo, the cigar-chewing fence who buys things stolen from the dead Scrooge. A bewigged Stephen Thorne is a happy Fezziwig, while Rebecca Gibel and Rachael Warren set benchmarks as ghosts.

Always watchable are the three children who are pros in their multiple roles. We saw the Green cast: a sweet Lana Lacombe, a sassy Lillian Johnson and Gustavo Londono, the boy with the beautiful voice. They alternate performances with the three members of the Red cast.

Gorgeous, too, are designer Michael Krass' costumes, including the ladies' gowns that swish and swirl in lively dance scenes choreographed by Myah Shein, and an eye-catching, mood-setting, multi-leveled set by Michael McGarty.

This year's "A Christmas Carol" is fresh, joyous and yet still meaningful - a real Christmas present.