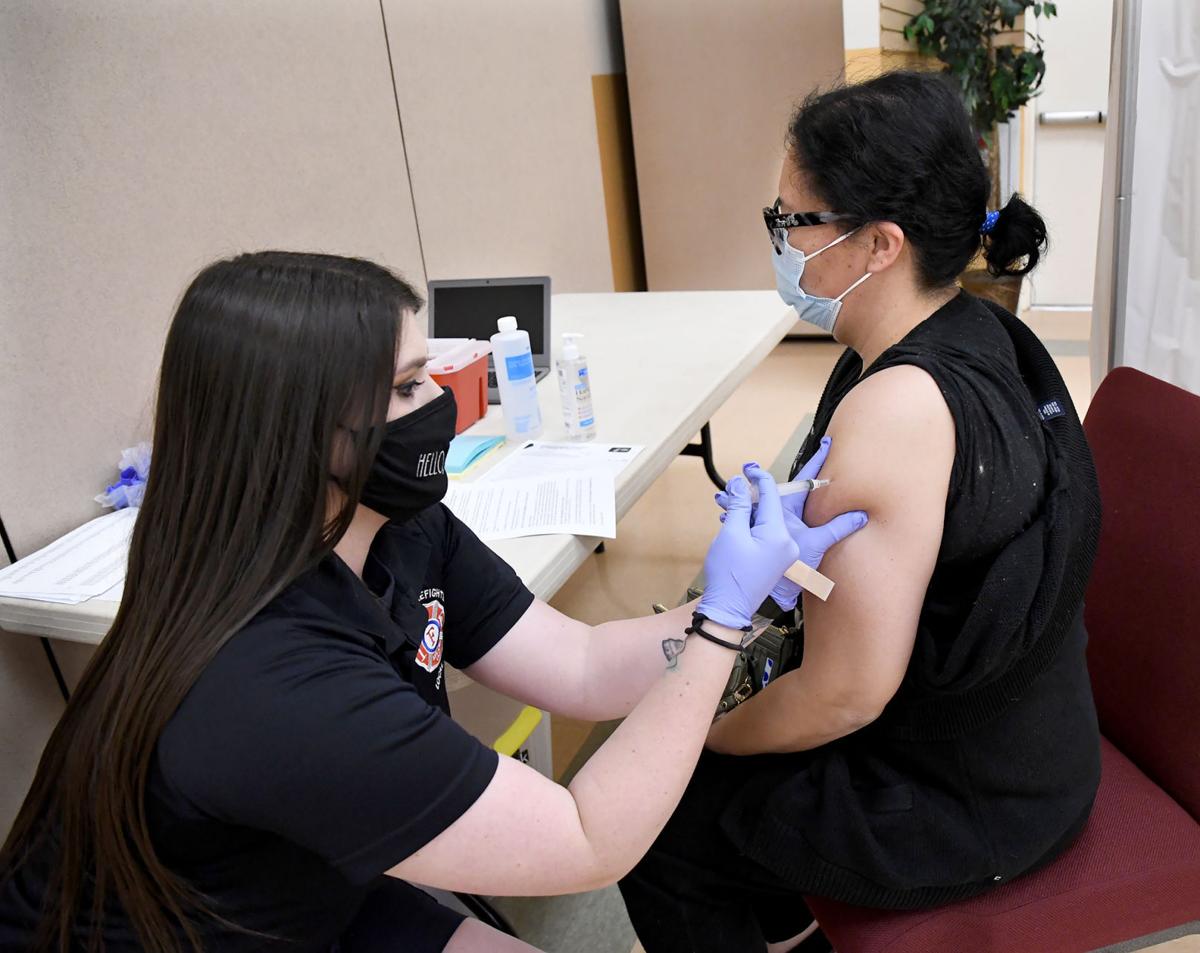 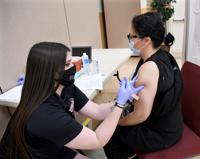 Vanessa José of Reading gets a vaccination from health care worker Tanisha Dyer at LaSalette Shrine in May. 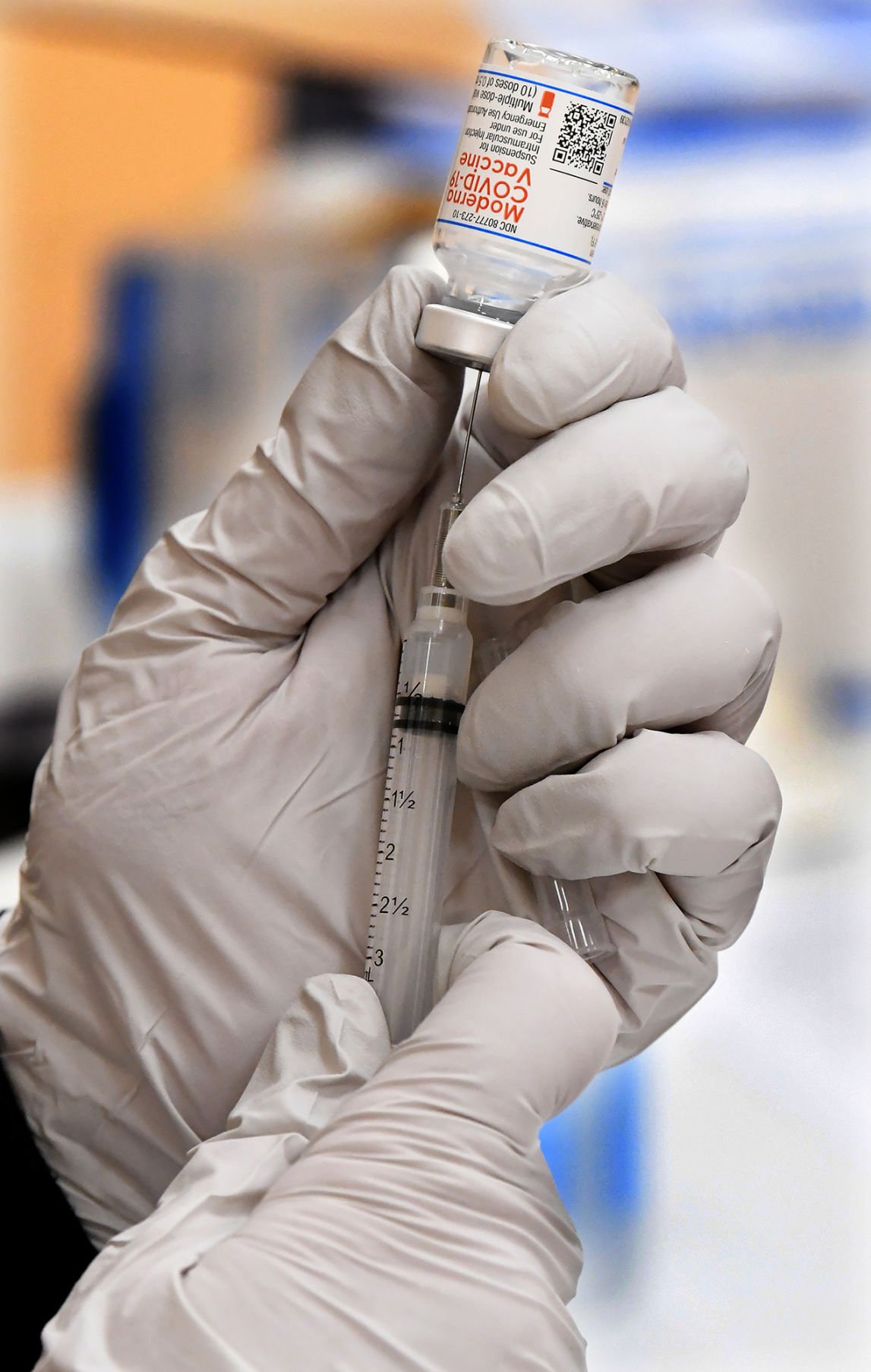 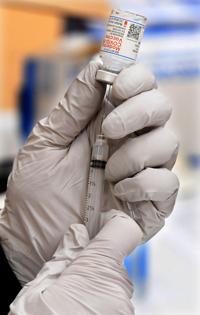 A syringe is filled with the Moderna vaccine at a May COVID-19 vaccine clinic at LaSalette Shrine in Attleboro.

Vanessa José of Reading gets a vaccination from health care worker Tanisha Dyer at LaSalette Shrine in May.

A syringe is filled with the Moderna vaccine at a May COVID-19 vaccine clinic at LaSalette Shrine in Attleboro.

As of Tuesday at 4 p.m. 3,652,173 residents of Massachusetts had gotten their first dose of a coronavirus vaccine.

Those numbers include the 261 doses that were administered Monday in Attleboro at the city’s first major clinic.

All told, 300 doses were available at the clinic, run by the Attleboro Health Department at LaSalette Shrine. So that means 87 percent of them were administered.

Unfortunately 39 people did not show up for their appointments, but not to worry.

Health Agent Jessica Horsman said the vaccine used, Moderna, was kept in a cold storage until needed, so the doses left at the end of the day won’t go to waste as has happened at other earlier clinics around the state.

They will be available for the next clinic at LaSalette on May 10.

That means there will be at least 339 doses, but that number could increase.

The clinic has the capacity to deliver 750 shots per session.

Horsman said some walk-ins were accepted on Monday to try to use the surplus vaccine, even though the clinic was intended to be by appointment only.

When the state began shipping doses to local clinics the number was small and the number of people seeking vaccine was great.

It was difficult to book an appointment.

Websites crashed and people were left frustrated and angry.

But on Monday, none of the people at the clinic interviewed by The Sun Chronicle said they had a hard time with the state’s pre-registration system, which offers a wide choice of sites. So the process has become easier.

Another indication that the process is easier came in an announcement on Tuesday that pharmacies in 48 Walmart stores in Massachusetts no longer require an appointment for a shot.

“Vaccines are being administered via both walk-up and scheduled appointments, providing convenient options for customers and members to get protected against COVID-19 (coronavirus) where they already shop for groceries and health care essentials,” a news release said. “Additionally, the company is rolling out new programs to both encourage people to get a vaccine and continue efforts to increase access across the country.”

Greater access means there are more doses of vaccine to go around.

According to numbers from the state’s Department of Public Health, Massachusetts has received 7,359,870 doses of vaccine from the federal government.

That’s about 105 percent of the number needed to give every one of the state’s 6,964,382 residents their first dose, which means the supply has increased.

And on Monday, Gov. Charlie Baker announced that he plans to close at least four of the state’s mass vaccination sites, including Gillette Stadium, before the end of June in order to reallocate vaccines to a greater number of local clinics and areas hit hard by the virus.

One of the aims is to convince the vaccine-wary to get inoculated to protect themselves and their loved ones.

The percentage of doses administered to those seeking protection from the virus in Attleboro, 87 percent, is actually a little better than the statewide percentage of 85.8 percent, as recorded in the daily vaccine report.

All told, 2,661,078 Massachusetts residents, or 38 percent, have been fully vaccinated with the Pfizer, Moderna or Johnson & Johnson vaccines.

Those who were vaccinated on Monday will need to return for a second dose in four weeks.

Meanwhile, on Tuesday the state recorded its third consecutive day of fewer than 1,000 new coronavirus cases. That has not happened since the week ending Oct. 24.