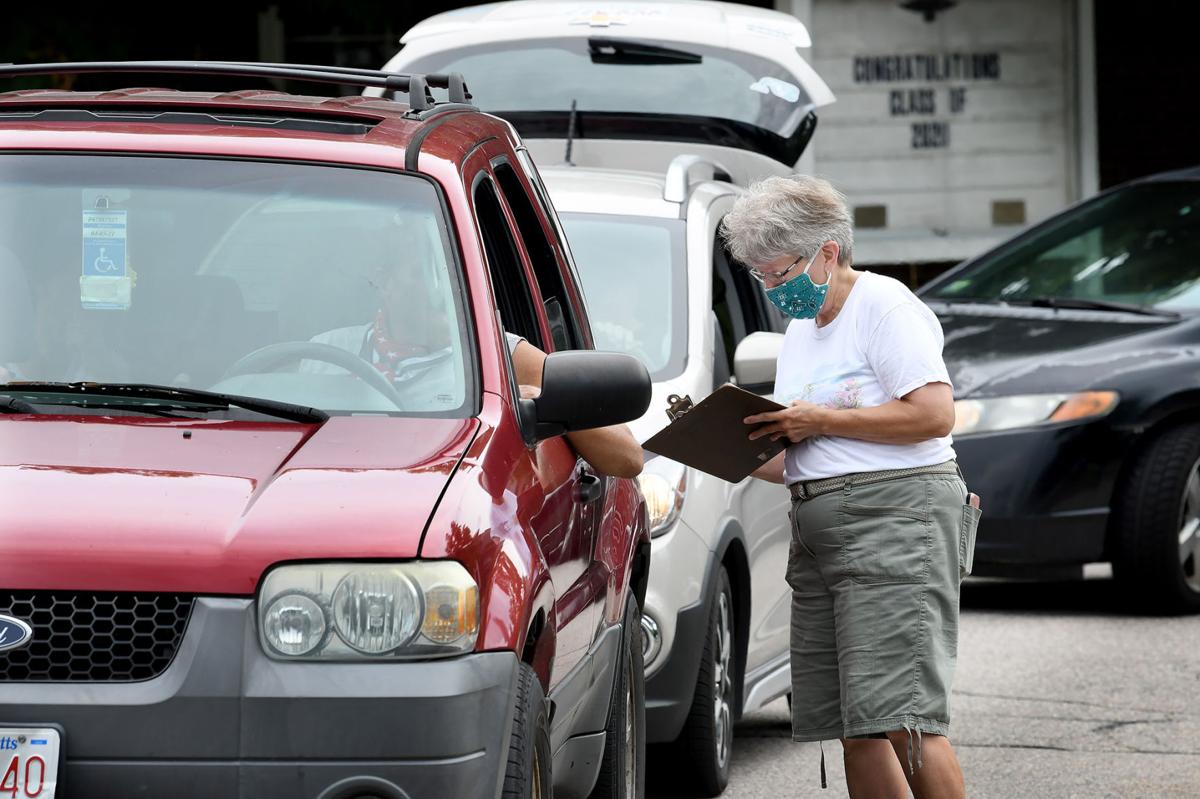 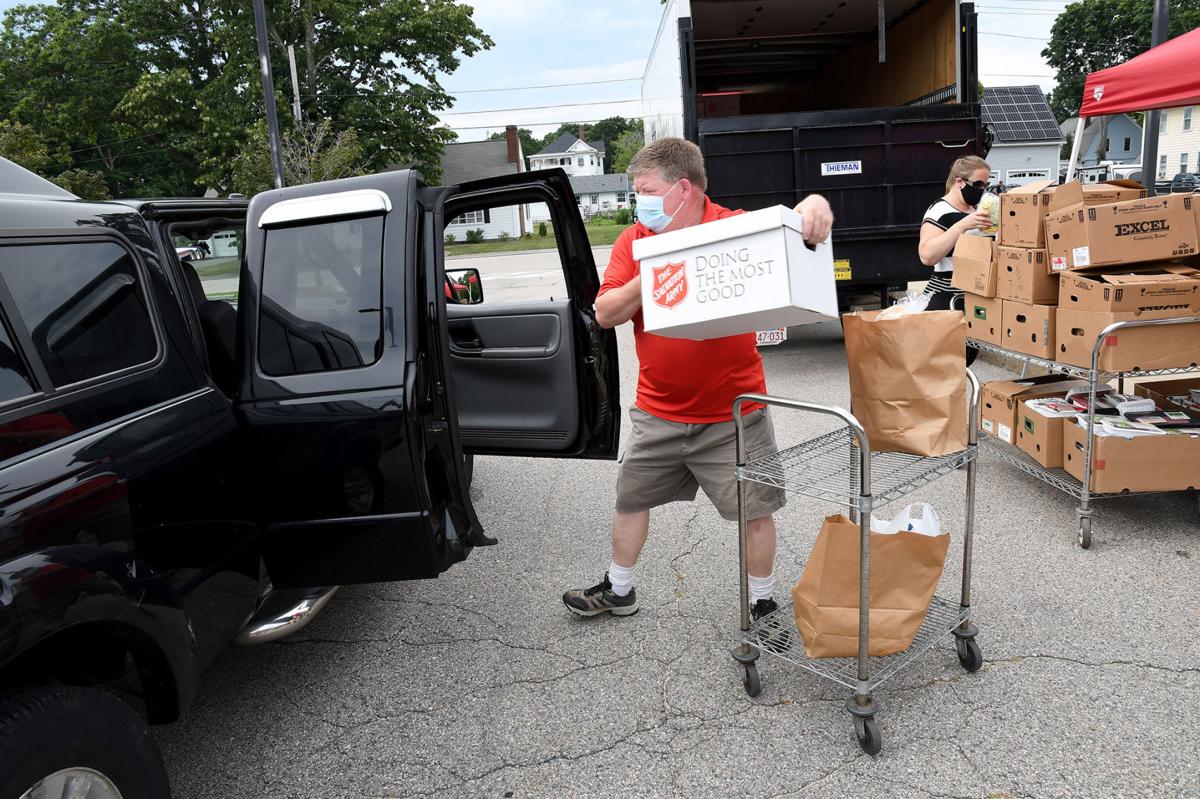 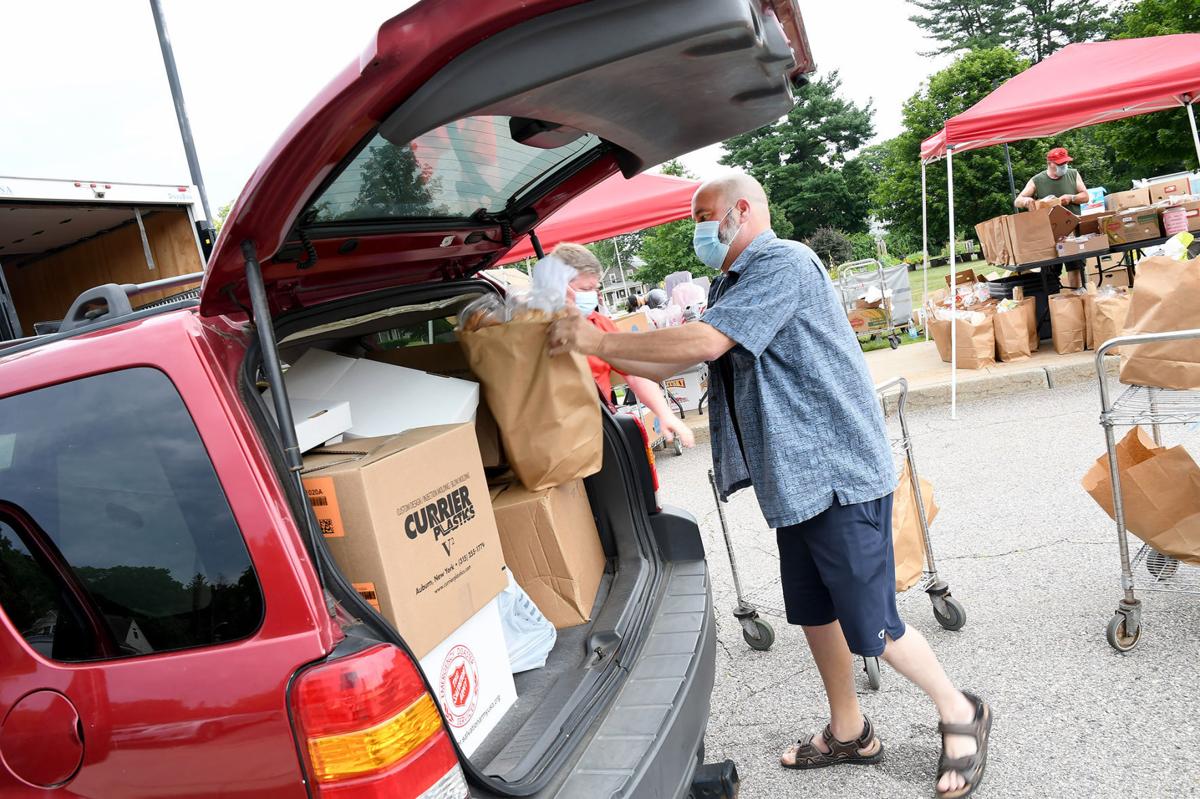 Hebron Food Pantry volunteer Randy Lithway loads food into the back of a vehicle.

Hebron Food Pantry volunteer Randy Lithway loads food into the back of a vehicle.

As of last month there were 4,767 unemployed people in Attleboro.

The unemployment rate in the city is 18.4 percent, up from 3.4 percent a year ago.

And in the 10-community Sun Chronicle area, there were 18,343 people unemployed.

That’s an unemployment rate of 16.6 percent, up from 3 percent.

The main cause is the coronavirus pandemic and the government-ordered shutdown of businesses.

So it’s no wonder that the meal program run by the Attleboro Interfaith Collaborative is serving three to four times more meals per day than it was prior to the pandemic panic.

And that meal service surge occurred even when unemployment checks, which in Massachusetts average about 50 percent of a worker’s normal weekly pay, were “enhanced” by $600 a week under the federal government’s Cares Act.

The average unemployment check in Massachusetts as of January, without the enhancement, was $385.

And the maximum a person can get, not including the enhancement, is $823, or $1,234 with dependents.

The four-month enhancement authorized by the Cares Act ended on Saturday, the last day of the last week benefits were authorized, and that has pushed Congress into debating an extension.

There’s been talk of lowering the $600 to some other figure, maybe $300 or $200, as the federal government tries to strike a balance between helping people who through no fault of their own are out of work and struggling, and trying keep the growth of the nation’s $25 trillion debt under control.

But whatever happens, one thing is for sure, help is needed, and one group that’s stepping up is the Interfaith Collaborative.

Executive Director Lisa Piscatelli said the organization, which depends on the goodwill and generosity of the community, is putting out 150 to 160 meals six days a week.

It has consolidated its efforts and now runs out of one site, St. John the Evangelist Church on North Main Street in Attleboro. The organization doles out free meals starting at 4:30 p.m. Monday through Friday and at 11 a.m. on Saturday at Centenary United Methodist Church on Sanford Street.

Prior to the pandemic there were five sites that served at least 30 meals a day and sometimes as many as 90, Piscatelli said.

If the $600 enhancement dies or lessens, things will get worse, she said.

“It would be a huge increase.”

Piscatelli said anyone who shows up and needs a meal gets one.

If someone needs more than one to take care of others at home, they get those meals as well.

No names are taken and that’s to encourage the hungry to get fed and lessen the fear of stigma, Piscatelli said.

Meanwhile, one of the city’s main food pantries, Hebron, is not quite certain what to expect if the extra cash is cancelled or diminished.

At the beginning of the pandemic there was a surge in the number of families seeking food, but those have since tailed off, director Michelle Burch said.

Efforts to control the spread of the virus forced Hebron to change its operation to a drive-thru service.

At first it operated out of the YMCA parking lot across the street from Centenary Church, where Hebron is based.

But when the Y reopened, the pantry moved to the parking lot of the Willett School on Watson Avenue.

Burch said when the pandemic hit hard in April, the pantry was hit hard as well with a 200 percent increase, or 150 new families, seeking help with food.

“The number of new people for the month of April was the most we had seen,” the longtime director said. “The most we had in 2019 in a month was close to 50 new families.”

She’s not certain why the number has fluctuated so widely.

The burst of new business in April could be related to the sudden unemployment of thousands of people, which hit before the enhanced unemployment benefits kicked in.

The drop-off since could be related to the $600 enhancement, which could allow families to buy the food they need.

And there’s some speculation that the word hasn’t gotten out that Hebron moved to Willett School.

The pantry is open Tuesdays from 10 a.m. to noon and on Thursdays from 4 to 7 p.m. to all who live in Attleboro, North Attleboro, Plainville, Seekonk, Norton, Rehoboth and Mansfield. All the food is prepacked.

But people are getting what they need and more.

“For the most part, clients are getting more food than if they were choosing their own items,” she said.

Burch said whatever happens with the unemployment extension, Hebron will be ready.

The pantry is well supplied by Boston Food Bank and local food stores, she said.

While Congress is debating the extension of the $600 enhancement, there’s another debate raging on The Sun Chronicle’s Facebook page.

There are those for and against the extra cash.

Vinny Marino of Wrentham said it is needed.

“The extra 600 was a necessity for many people because there is a limit on unemployment…,” he said. “That’s not enough to pay a mortgage and eat.”

Darline Almeida, hometown unknown, said the cash is needed for regular folks trying to get by.

“Those extra (six hundred dollars are) helping the middle class stay afloat for a little bit longer,” she said in her post.

“If you take it away people will starve, ou(r) homeless population is going to skyrocket,” she said. “I feel sad for anyone who’s so out of touch that they can’t understand what is actually happening right now.”

‘Needs to go away’

But Aaron Smith of North Attleboro said the $600 does more harm than good.

“It needs to go away,” he said in his post. “It is preventing people from taking jobs as they make more not working.”

Paul Belham of North Attleboro said people are taking advantage of the opportunity to stay home and get paid for it.

“(Too) many freeloaders taking advantage of this,” he said.

Peter Freeman of Norton said everyone will pay a price for the government’s generosity.

“Stupid to begin with,” he said. “People making more to stay home and not work? Who pays for that...we all do with higher taxes. There’s no such thing as free money.”

As of this writing the fate of the enhanced unemployment benefits was unknown, but a couple of local officials are making a plan to ensure that people who need help in the wake of the intransigent virus will be able to find it.

State Rep. Jim Hawkins D-Attleboro and City Councilor Todd Kobus teamed up with Project Bread in Boston to create a flyer that summarizes different food supplement programs like SNAP and WIC and instructs people on how to apply for them.

The duo intends to print up as many copies as they can and get volunteers to hand them out and talk up the programs at food pantries like Hebron and kitchens like that of Interfaith Collaborative.

“The concern is that if the $600 goes away there will be a burgeoning need for food,” Hawkins said.

He said many people now on unemployment have never been there before and are reluctant to take part in some government programs because of a perceived stigma.

“We want to talk them up and get them to do it,” Hawkins said. “It’s not going to solve the problem, but we’re hoping it will ease the burden.”

For more information on local food efforts or to make a donation, go to hebronfoodpantry.org and attleboroareainterfaithcollaborative.org.