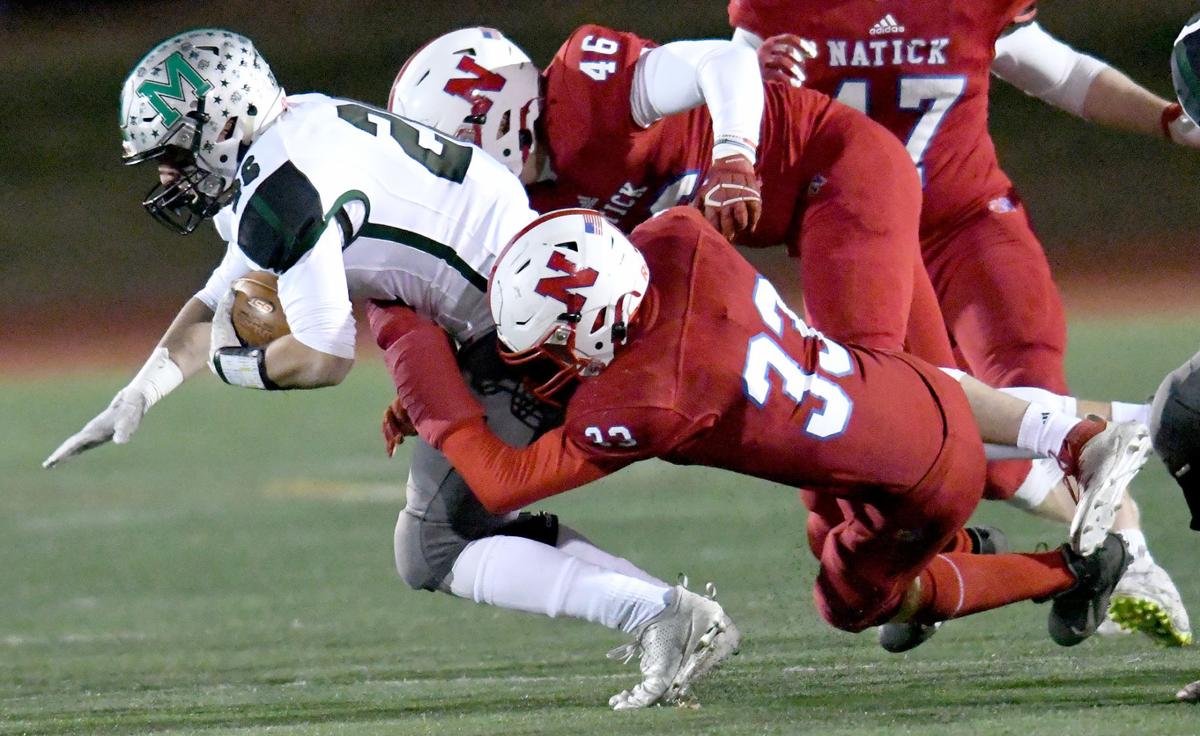 Mansfield’s Nick Marciano is taken down by a pair of Natick defensemen last November as MHS beat Natick in the MIAA Div. 2 state semifinals.

Mansfield’s Nick Marciano is taken down by a pair of Natick defensemen last November as MHS beat Natick in the MIAA Div. 2 state semifinals.

The fall football season may have been effectively canceled and so-called “low risk” sports OK’d, but local high school officials are asking for patience while they try to figure out what athletics will look like in a time of coronavius.

And they may look very different.

The athletic directors of the 12 Hockomock League school districts, which include Attleboro, North Attleboro, Mansfield, Foxboro and King Philip Regional, issued a statement Thursday saying, “there is still a lot of work to be accomplished before a fall 2020 sports season is permitted.”

They said they hoped to have more information “in the coming week or two.”

On Wednesday, the Massachusetts Interscholastic Athletic Association’s board of directors announced it approved the recommendations from its COVID-19 Task Force and the state Department of Elementary and Secondary Education to only allow what are deemed to be low- and moderate-risk sports this fall season.

The ruling held out hope, however, that football and other “higher-risk” sports could be played later in the school year in a fourth “floating season.”

Those sports may not begin play until late February, though, with the season running into April.

In their statement, the ADs said that while they want to get student-athletes back on the field, their health and safety “is paramount.”

“The low-risk sports, cross country and golf, and the moderate-risk sports, field hockey, soccer, and girls’ volleyball, must undergo modifications, some significantly changing the look of the game, to adhere to the ... guidelines,” the ADs said. “Those MIAA-sport committees are working on that goal now. Girls’ volleyball, as an indoor sport, has some very significant hurdles for high school programs to overcome.”

Individual school districts are trying to come up with ways to make the new rules work.

“Each district’s school committee is charged with approving the specific sports programs that will be offered at each of our schools,” the statement said. “Once those details are gathered by our league ADs and principals, schedules can be drawn up and approved for publication.”

Not all school districts are quite as hesitant.

Bishop Feehan High School in Attleboro is not part of the Hockomock League. The school, which had been in the Eastern Athletic Conference, joined the Central Catholic League in February.

Chris Schatz, athletic director at the co-ed Catholic high school, said the MIAA decision is “probably a well-thought out and good plan.”

All concerned, he said, “are doing their best to get these kids playing.”

At Feehan, he said, “we are working with our new CCL partners” and “nothing is completely off the table.”

Schatz said Shamrock football players and cheerleaders “are very excited” by the prospect of getting back to training for the new “floating season” that will allow competition, possibly in the spring.

And while Feehan students are scheduled to return to class at the end of this month, earlier than public schools, sports teams — including those that will be able to play in the new fall season — won’t be able to start practicing until the Sept. 18 deadline, and the first games can’t come until two weeks after that.

“We will be moving forward to make tryouts and competition as safe as possible,” Schatz said. “We are excited to get kids back out there.”