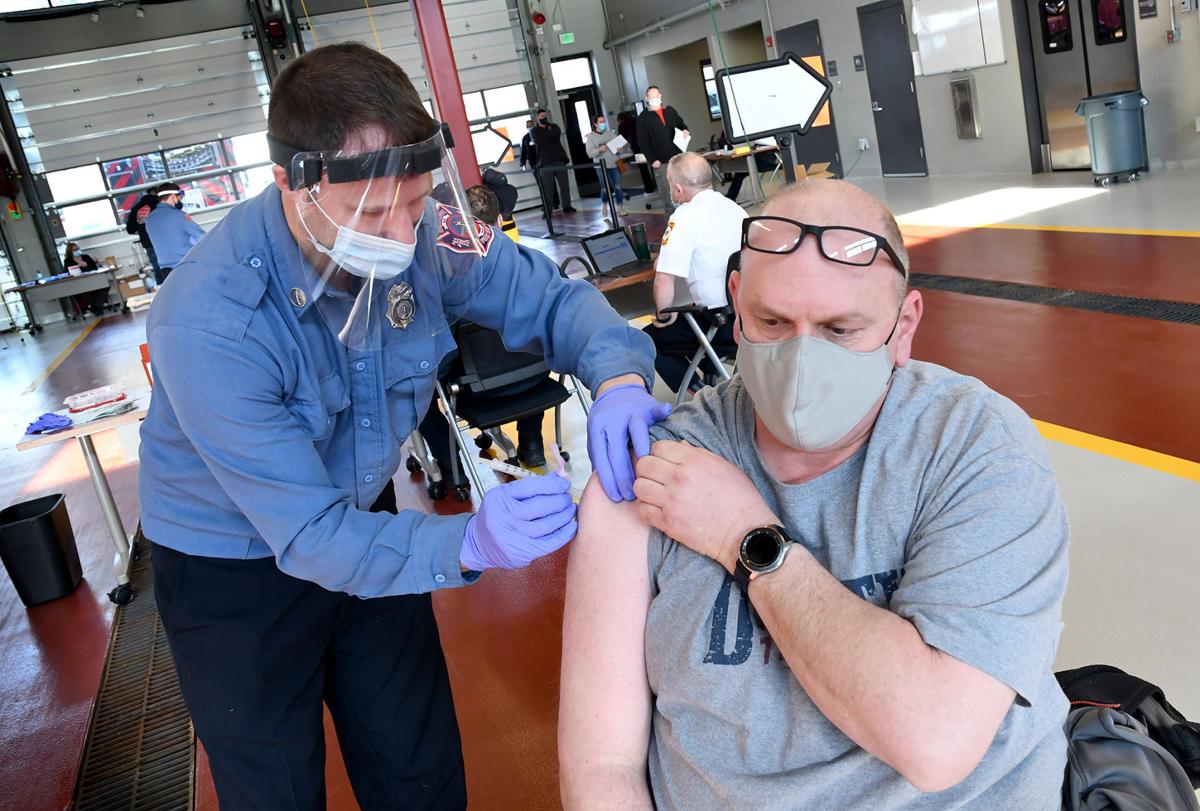 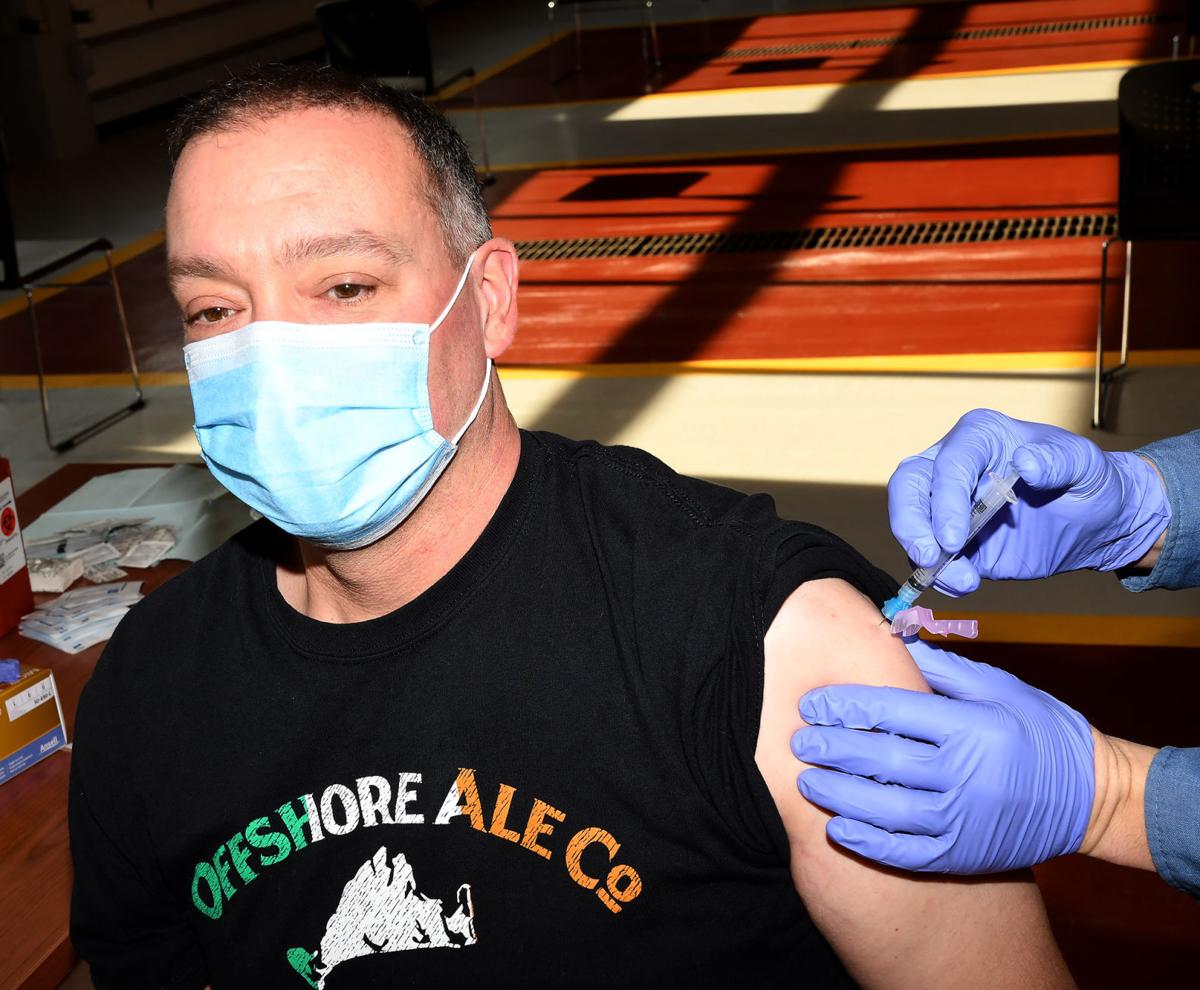 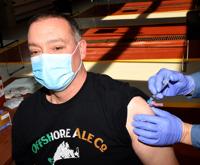 Plainville Police Officer Steven Fontes is given an injection of the Moderna vaccination. 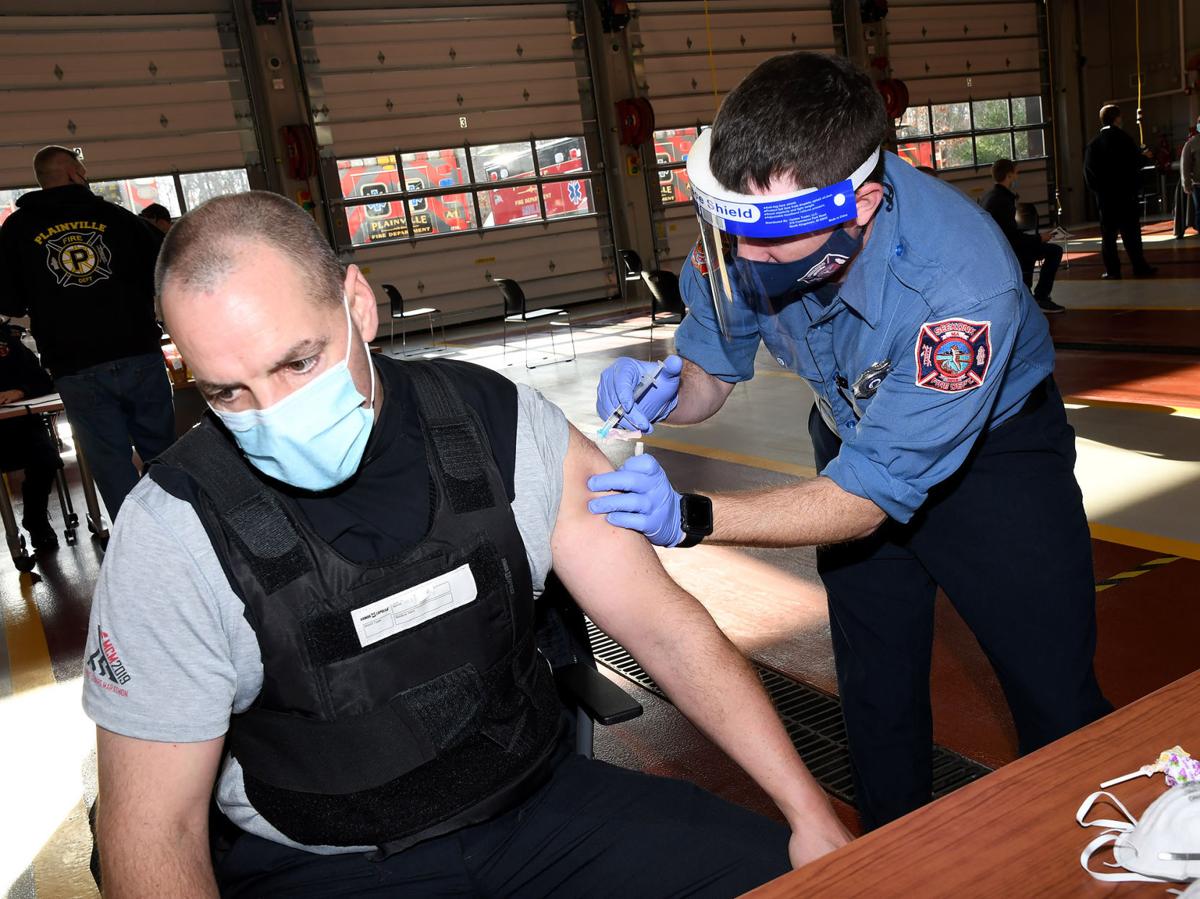 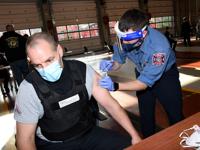 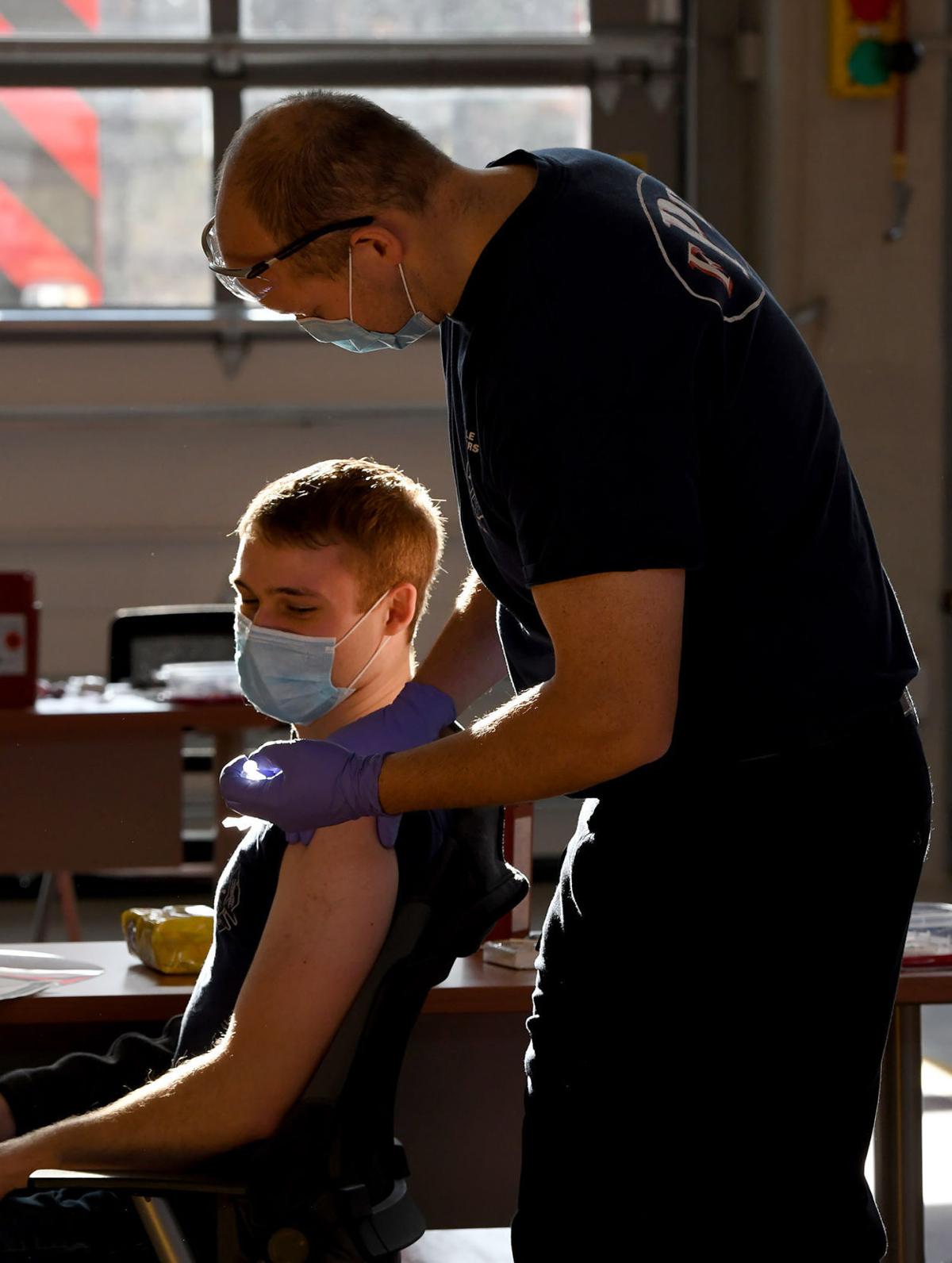 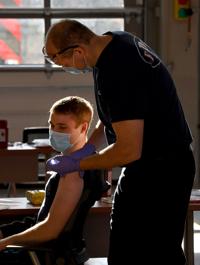 Plainville firefighter Ben Angelo is given his shot by fellow firefighter/paramedic Kevin Peter. 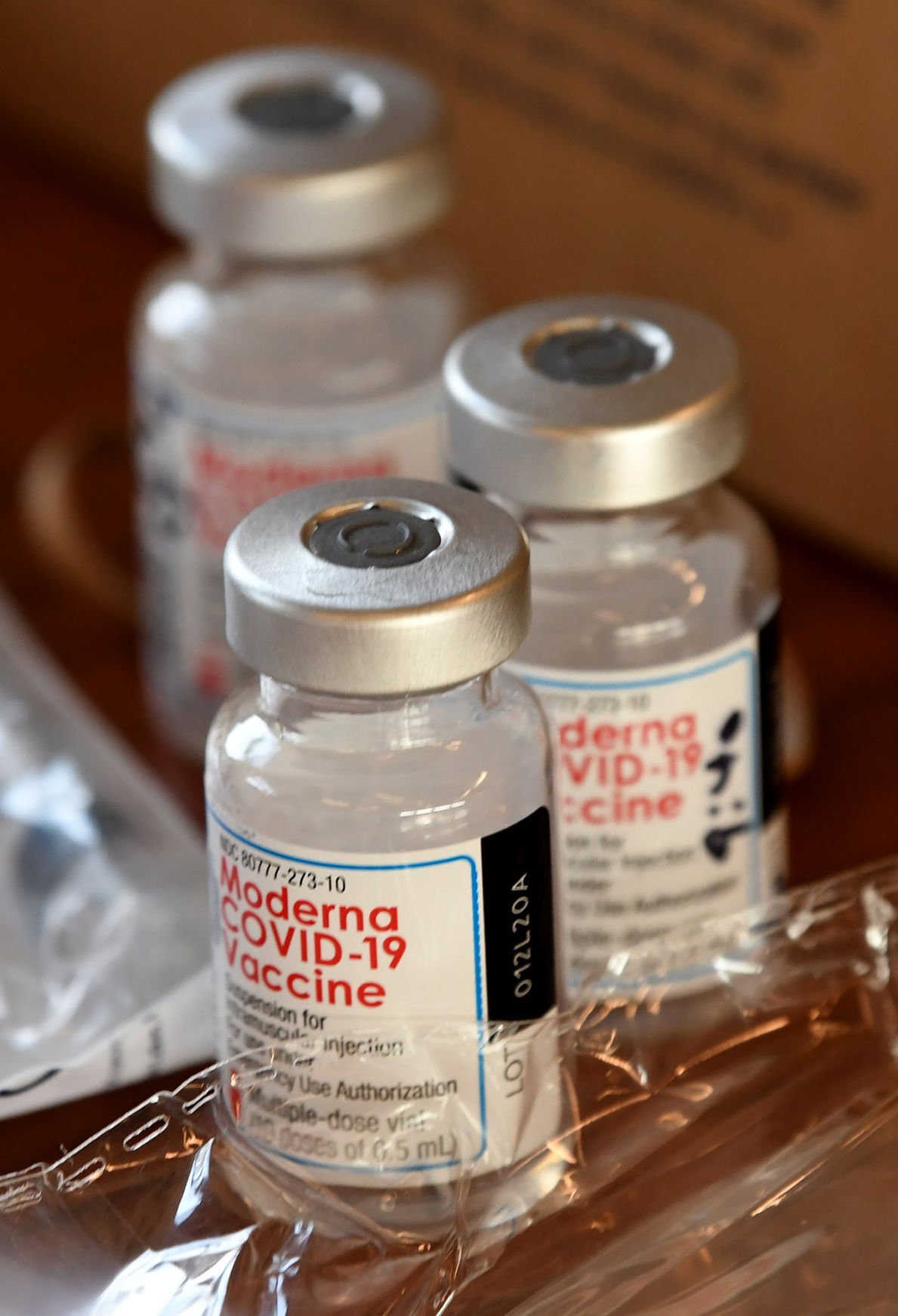 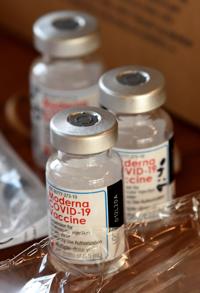 First responders from Plainville, North Attleboro and Seekonk were some of the most recent to receive their first dose of the Moderna vaccination to combat the Covid-19 pandemic Tuesday at the Plainville Safety Complex.

Plainville Police Officer Steven Fontes is given an injection of the Moderna vaccination.

Plainville firefighter Ben Angelo is given his shot by fellow firefighter/paramedic Kevin Peter.

First responders from Plainville, North Attleboro and Seekonk were some of the most recent to receive their first dose of the Moderna vaccination to combat the Covid-19 pandemic Tuesday at the Plainville Safety Complex.

PLAINVILLE — First responders in area communities lined up to get their first doses of the coronavirus vaccine Tuesday.

It was simple and painless, they said.

“There was a five-minute wait. There was no problem at all. You don’t even feel the needle — and I’m no fan of needles,” Kevin Silvestri, a veteran North Attleboro police officer, said after getting his shot at Plainville fire headquarters.

The large garage area of the station was transformed into a clinic for the first responders from North Attleboro, Plainville and Seekonk to receive their first does of the Moderna vaccine.

They will have to get a second dose in about a month.

About 80 were getting shots Tuesday. They are being given to police and firefighters before they go on their days off in the event they suffer any side effects. Other officers and firefighters will get the vaccine in the coming days.

The three town departments and boards of health formed a consortium to receive and distribute the shots to the first responders serving their communities.

Even though they will be fully vaccinated in the coming weeks, the first responders will still be taking health precautions and donning personal protective equipment when going out to calls.

First responders are the third priority group within Phase 1 of the state’s vaccine distribution timeline. Front-line hospital workers were first and residents and employees in nursing homes were second.

During a press conference Tuesday, Gov. Charlie Baker said vaccinating first responders keeps them, their families and the individuals they deal with safe “to ensure that they can do their jobs and continue to keep our communities safe.”

Since mid-March, when the pandemic hit Massachusetts, almost 1,000 firefighters in the state have been infected, according to the Professional Firefighters of Massachusetts.

“The vaccine for your local firefighters cannot come fast enough,” the union said in a tweet Monday, adding that 374 firefighters have tested positive for COVID-19 over the past 30 days.

An estimated 250 police officers in the state have been infected with COVID-19, including a Norton police sergeant who is now in intensive care.

The National Law Enforcement Memorial Fund says two have died from the virus in Massachusetts, including a police officer in nearby Taunton.

“We’re ecstatic the vaccine is being made available to us. It’s long overdue. I’m glad everyone was able to work together to make it happen,” said Paul Jacques, president of the Attleboro Local 848 firefighters union.

Mansfield Fire Chief Justin Desrosiers said he, like some others who received the shot Sunday, had soreness in his arm the following morning. He said he also felt “run down before going to bed” but “felt fine in the morning.”

A top official of Moderna, a Cambridge-based biotech company that produced the vaccine being administered, said he believes it should last about a year, according to CNN.

Moderna’s CEO, Tal Zaks, said the company will have to test people to see if adding a third dose will extend protection against the virus.

Both Moderna’s and Pfizer/BioNTech’s coronavirus vaccines won emergency use authorization from the U.S. Food and Drug Administration.

They were only invented within the past year, so no one knows for sure how long they’ll protect people.