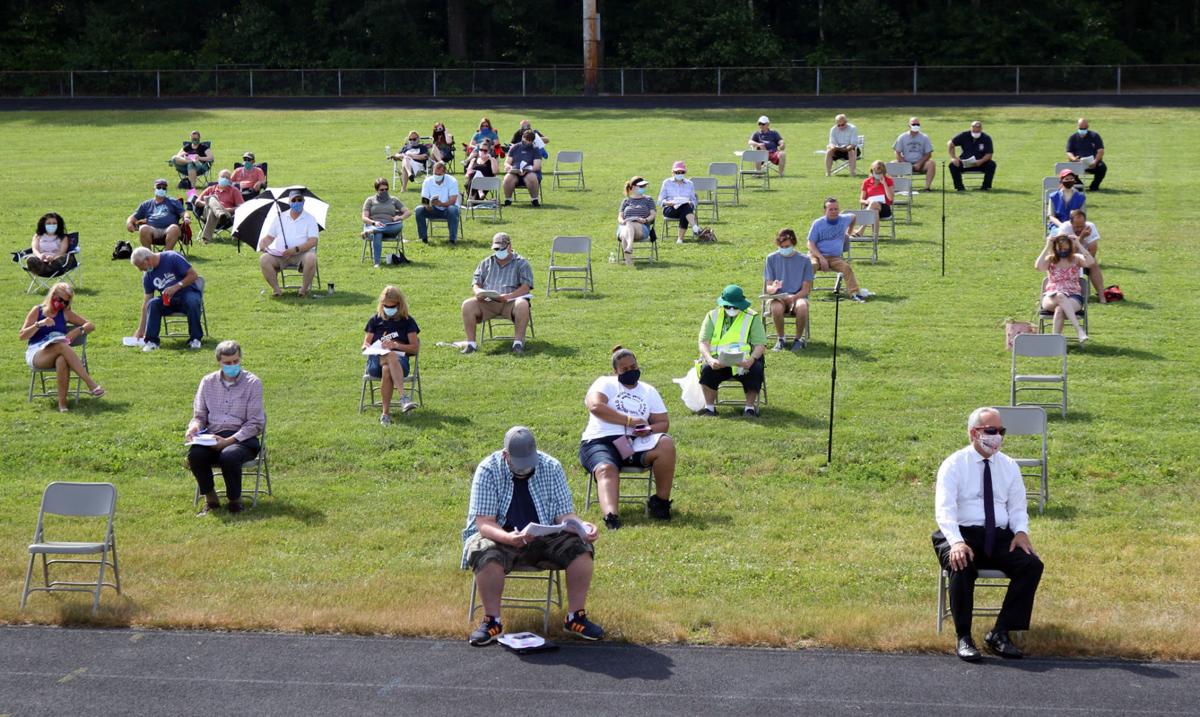 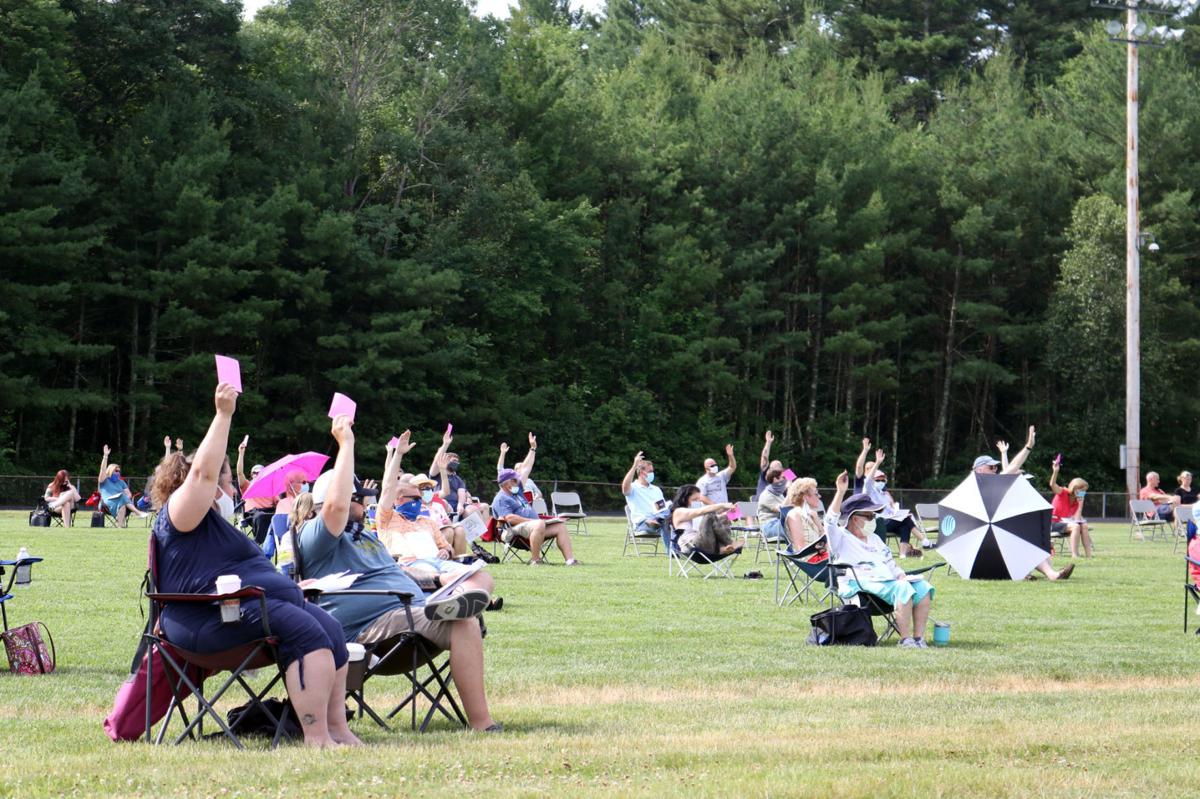 NORTON — Residents at Saturday’s annual town meeting approved a $61 million budget for the fiscal year starting July 1 with no debate, but really got steamed when they were asked to allocate another $1.1 million for cost overruns for a sewer project.

A total of 122 residents spread out across the high school football field in chairs, wearing masks and toting water bottles and sunscreen.

To limit the time of the meeting, only financial articles were addressed, and the meeting wrapped up in about 1 1/2 hours.

The $60.8 million budget is based on local receipts down over 20 percent and state aid dipping 10 percent because of the economic shutdown from the virus pandemic.

However, boosted by about $1 million in reserve funds, the budget increases this year’s spending by 2 1/2 percent but requires the laying off of three teachers.

Local officials are hoping more state aid comes down the line and the spending can be adjusted in the fall.

The latest project cost of $6.8 million is over half the initial bid of $3.2 million, Selectman Jack Conway pointed out.

“This is rather outrageous,” said Bill Gouveia, who just stepped down as moderator. “Has this project been properly managed? From any objective standpoint, it hasn’t. That is what worries me very much, this open pocketbook. This should have been better planned from the beginning. It is inexcusable.”

The latest cost rise is attributed to more unanticipated old utilities and ledge in the work area.

“We encountered a number of uncharted utilities,” Steven Pederson of the engineering firm Weston & Sampson told voters, adding many were found near Wheaton College and the intersection of routes 140 and 123. “State drains aren’t where they were supposed to be. There were utility lines Verizon and Comcast didn’t know they had.”

“We had extensive unknown and unused utilities” dating back to the 1950s in the roadway, Grant said.

About 3,000 feet of sewer pipe has been installed, at a cost of about $3.5 million including nearly completing a pumping station. About 3,500 feet of pipe remains to be put in the ground, with excavation as deep as 16 feet. Ledge is just below the paved surface at that location. The remaining work, now projected to wrap up next spring, is estimated to cost $3.3 million.

About half the $1.1 million will go to the contractor, and roughly half for more police details, with Weston & Sampson earmarked to get $150,000 more for oversight work.

Going into the meeting, $5.7 million had been appropriated for the project, with $1.5 million and $800,000 added at two previous town meetings.

“It’s the first time we came back since we started construction and were able to see what was in the road,” Pederson said.

Sewer rates and $1.7 million from the housing authority from a state grant cover the costs.

“This is a giant leap forward for this community,” Grant said.

Most don’t dispute the need for the project, which will provide needed wastewater disposal for Woodland Meadows, the town’s senior housing that has a failing septic system, and the Yelle, middle and high schools now served by a treatment plant that is under state orders to be addressed.

Housing authority member Ralph Stefanelli referred to sewer service that will be provided to homes and businesses and vacant lots along West Main. “The $1.1 million is a drop in the bucket, the revenue that will be produced.”

“This is a debacle here. This is ridiculous,” planning board Chairman Steve Hornsby, who manages projects, said of the skyrocketing costs.

The extra funding was approved by the required two-thirds vote.

Also, $1.3 million in so-called capital items, building and equipment expenses, was easily approved, including for new police and fire department vehicles, school buses, and $850,000 for the replacement of two wells.

Zoning bylaw changes were postponed to the fall town meeting.