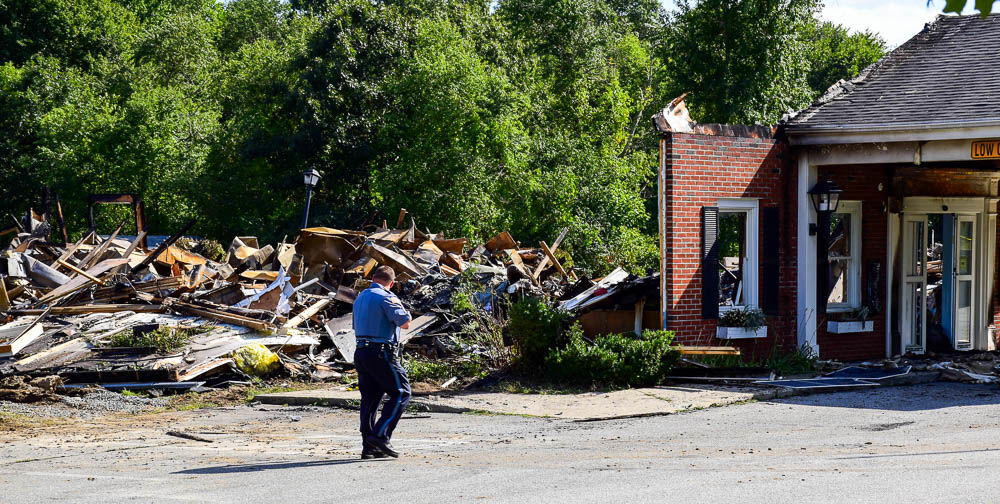 A police officer surveys the damage at the senior center in Rehoboth on Sunday, a day after a fire destroyed the building. 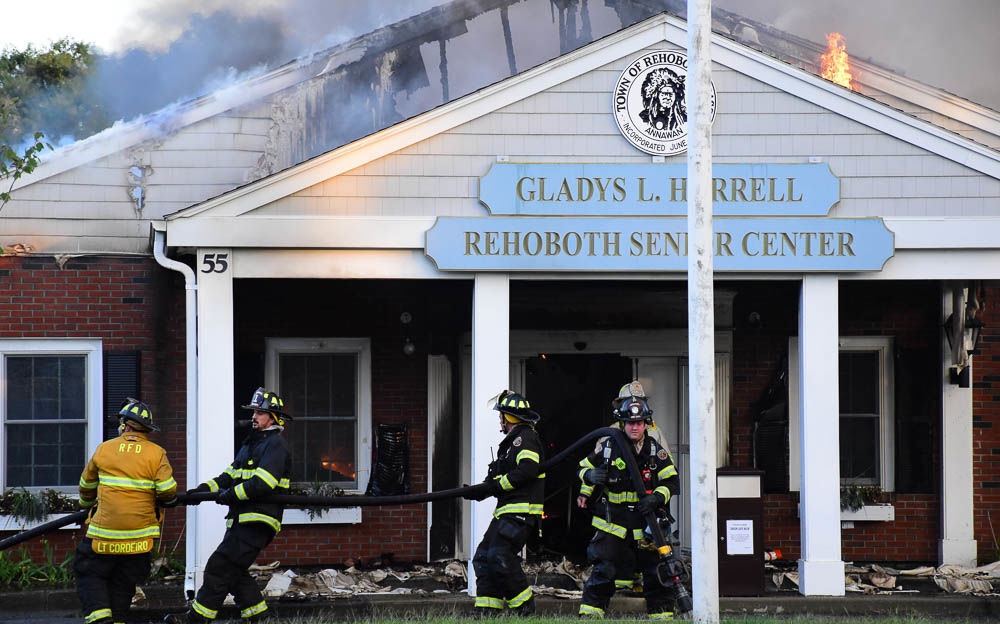 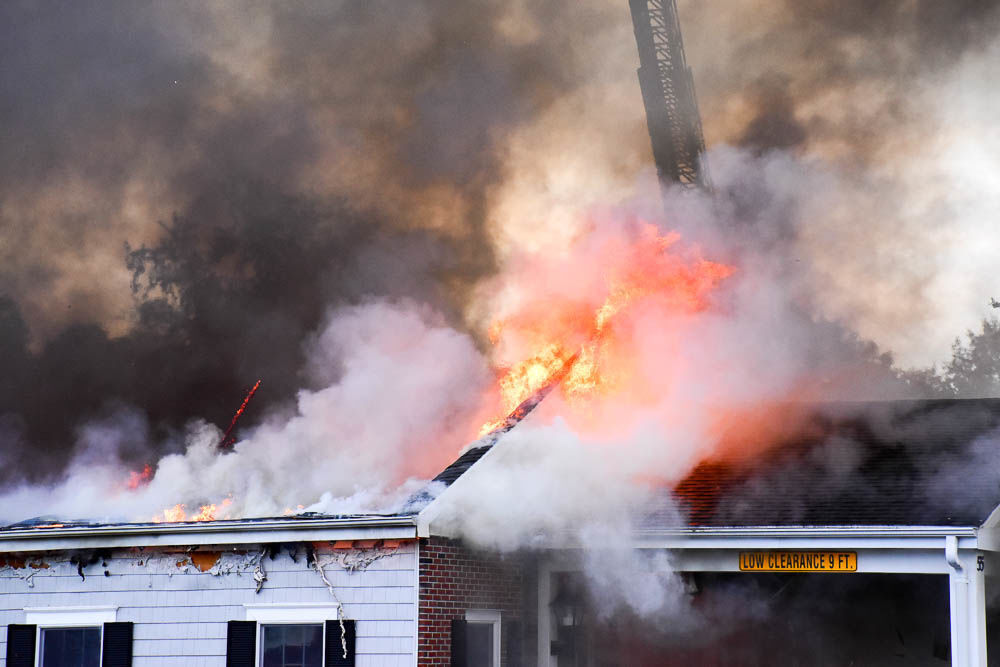 Smoke from the fire at the senior center in Rehoboth on Saturday could be seen miles away.

The senior center in Rehoboth was destroyed by a fire Saturday. The debris from the fire and demolition of the remaining structure was visible on Sunday. 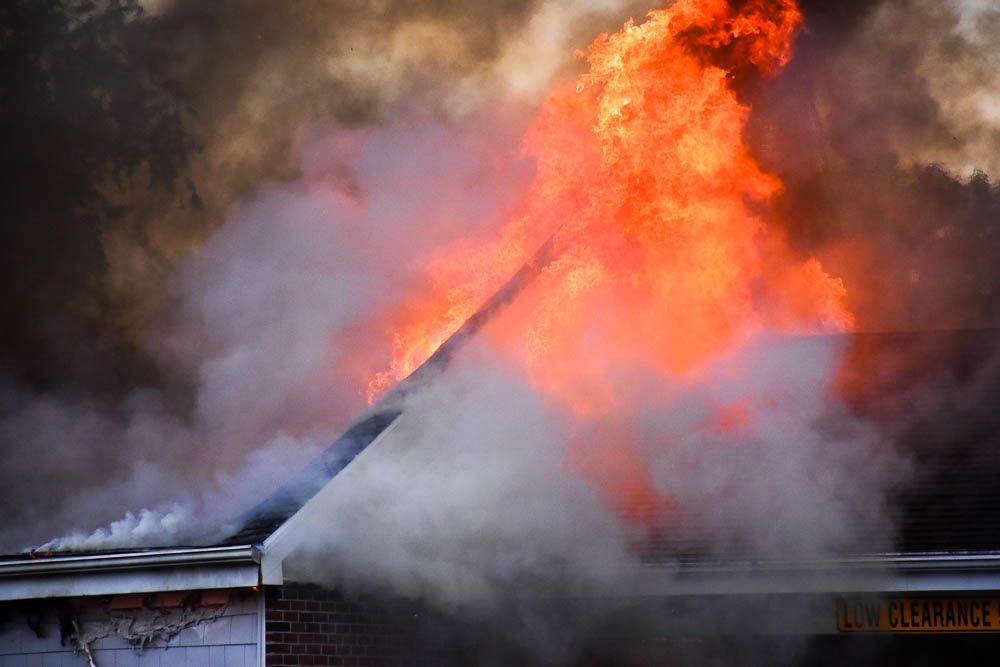 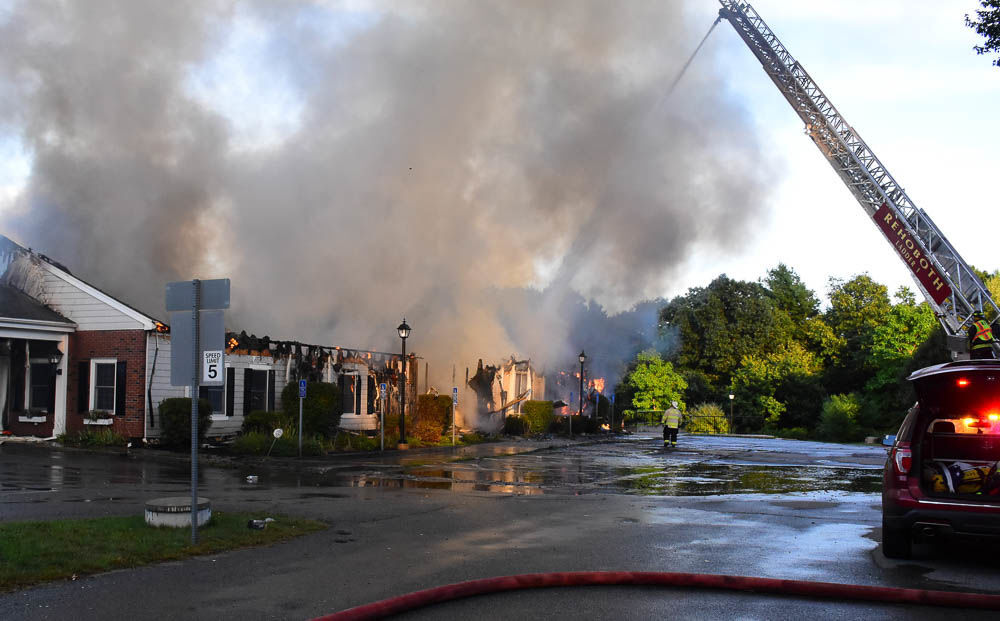 Firefighters work to extinguish the fire at the Rehoboth senior center on Saturday.

A police officer surveys the damage at the senior center in Rehoboth on Sunday, a day after a fire destroyed the building.

Smoke from the fire at the senior center in Rehoboth on Saturday could be seen miles away.

The senior center in Rehoboth was destroyed by a fire Saturday. The debris from the fire and demolition of the remaining structure was visible on Sunday.

Firefighters work to extinguish the fire at the Rehoboth senior center on Saturday.

REHOBOTH — “There are angels in there,” Council on Aging Director Linda Sherman said Saturday as she watched firefighters battle flames that ultimately destroyed the town’s senior center on Saturday, a building so many called their second home.

The building was already engulfed in flames when firefighters arrived and the roof of the one-story building that also houses the Council on Aging ultimately collapsed.

Sherman said 80 to 100 meals a day were served to those in need out of the Council of Aging building through a program called Toss and Go Meals.

Prior to the pandemic, more than a 1,000 people a week would access the sprawling single-story building at 55 Bay State Road (Route 118) in Rehoboth, she said.

Sherman said the Council on Aging will meet sometime Monday to put together a temporary plan. Rehoboth is a resilient town, Sherman said.

“It’s a great building. We will rebuild. We will persevere and we will have something temporary soon,” she said.

Diana Silva, along with her husband Stephen, who have been lifelong residents of the town, both said they are among the three or four people that were allowed in the building on Mondays to help cook for the meals program.

Both said they cooked on Mondays and prepared meals for others all week long.

Stephen Silva said there was hundreds of pounds of meat in the freezer inside the building when it burned.

Sherman said most of the food used for the meal programs was donated and was used to help feed hundreds of residents each week.

Everyone that spoke about the building not only discussed the meals program, but also the sewing room, the computer room and other recreation rooms in the structure which were wiped out by the intense flames in the fire that was called in at 5:16 p.m. Saturday.

They said a large number of volunteers would use the sewing area to help make facial masks and other items for Sturdy Memorial Hospital in Attleboro.

Erin Bomes, a resident of Bay State Road which is just down the street from the Council on Aging, stood clutching a folded American flag.

She said the flag and its pole were on the edge of the community garden next to the burning building and was pulled from the structure by one of the crew that entered the building just before the roof started to cave in.

Rehoboth Fire Chief Frank Barresi said the fire had already burned through two sections of the roof by the time people started calling about the fire.

Initially firefighters made an interior attack into the building but when the roof began to collapse Barresi said he pulled all firefighters out of the building and went to a defensive attack of the flames that were ravaging the structure.

The chief said he immediately set up a ladder pipe and tried to push the flames back along with a number of ground lines, but the flames were intense.

He setup a roving group of tankers from Rehoboth, Plainville, Berkley, and Warren, R.I., to keep water available to help fight the flames.

As dark descended over the scene, he called for the town’s public works department to bring in a front-end loader to knock down the remaining walls so fire crews could get at hot spots.