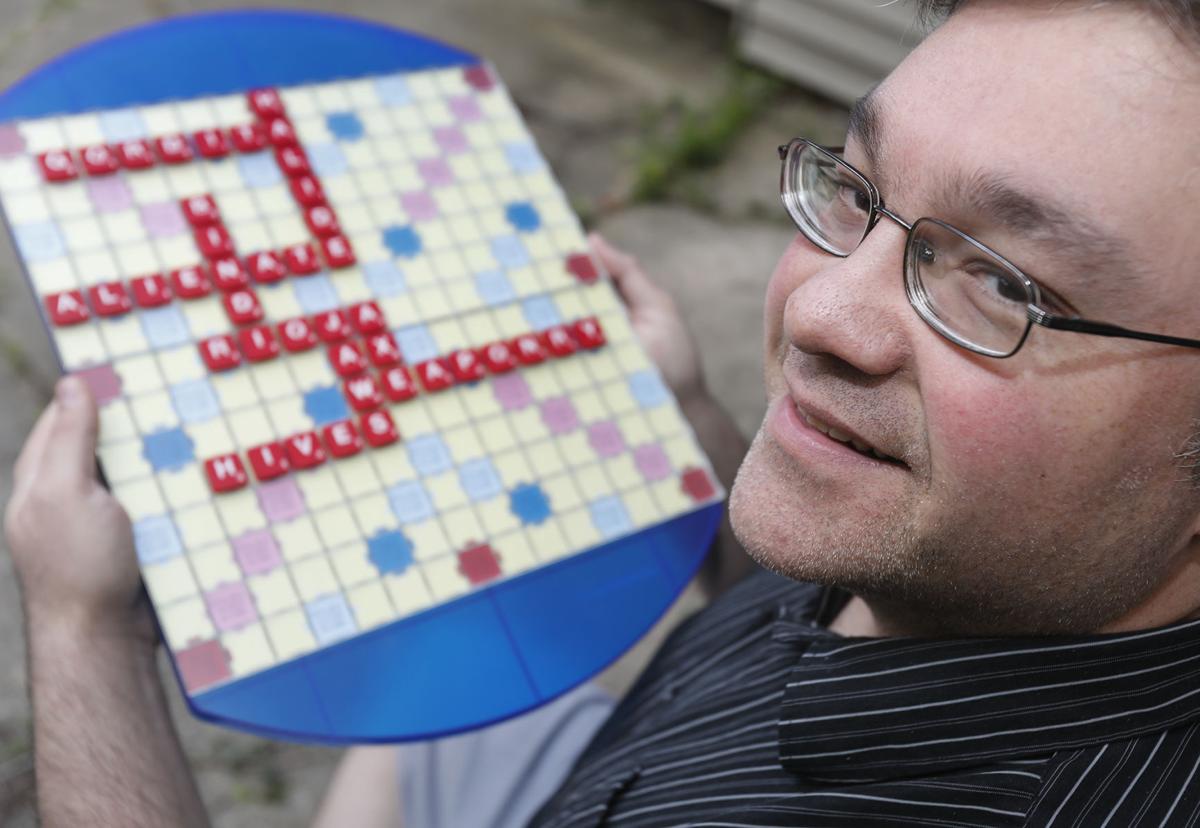 Scrabble champion Bradley Whitmarsh of Attleboro holds a game board. 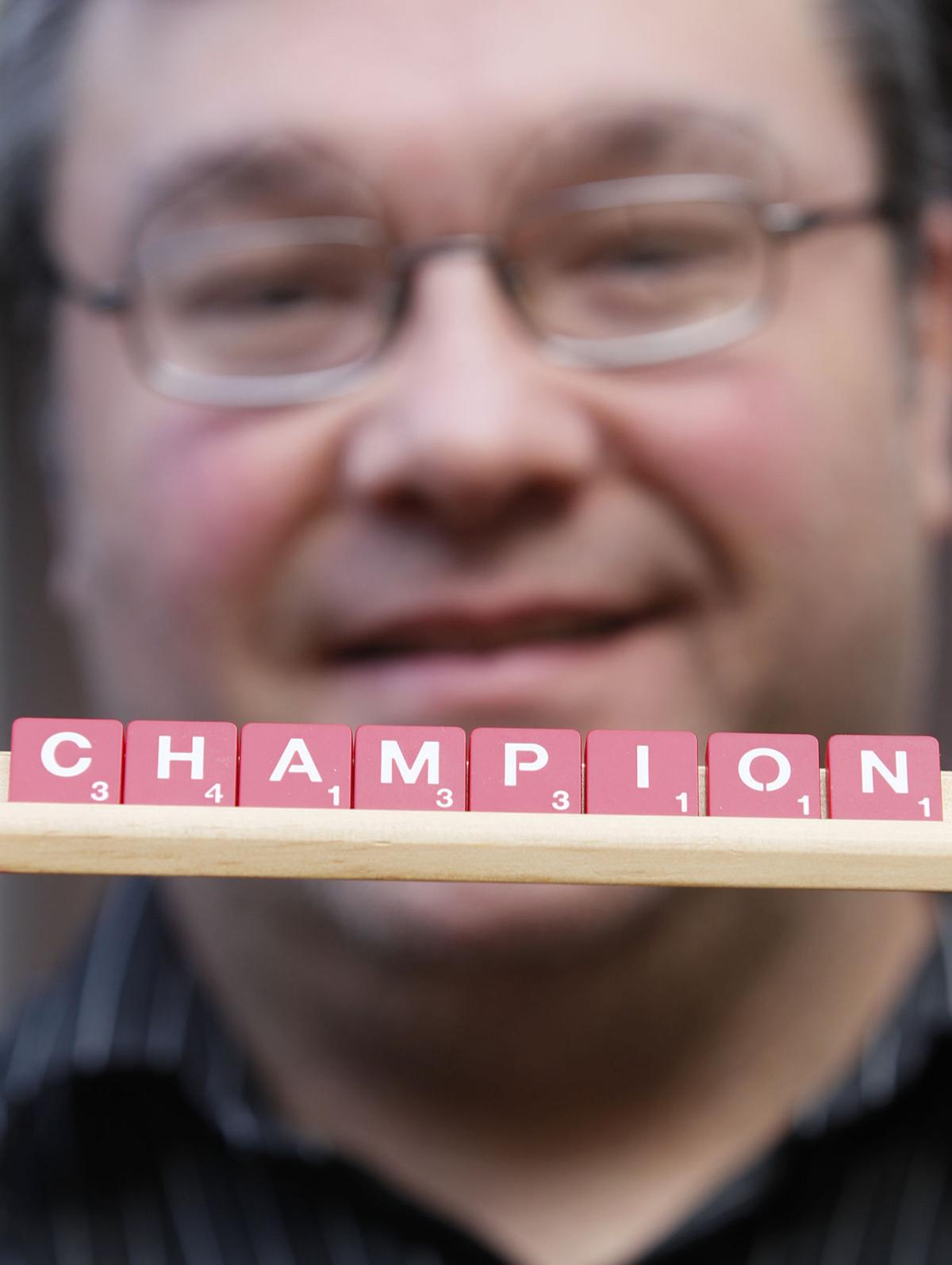 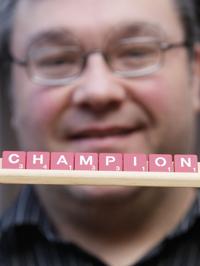 Bradley Whitmarsh is the No. 3-ranked Scrabble player in Massachusetts. He says he looks at the game as a puzzle.

Scrabble champion Bradley Whitmarsh of Attleboro holds a game board.

Bradley Whitmarsh is the No. 3-ranked Scrabble player in Massachusetts. He says he looks at the game as a puzzle.

Playing “coronavirus” in a game of Scrabble would earn a base score of 16 points before any bonus kicked in. Played carefully to capture both the elusive middle and upper right triple-word score squares, it would multiply exponentially, tallying 153 points.

Of course, with only seven tiles on your rack, your competitor would first have to play some shorter version of the word — perhaps “corona” or “virus” — and leave enough space for you to fill in the rest.

“Pandemic” would be an easier feat, with a 144-point total in the triple-word score corner, which also contains a double-letter score on the fifth square.

In his first major triumphant play, Bradley Whitmarsh used a different word in that spot, although its meaning is equally as relevant in the COVID-19 era.

“Downcast” played 17 points, earning him 153 with the bonus, plus an extra 50 for emptying his rack in one play. The total haul was 203 points in a game where he scored 573 overall.

And after four months of canceled tournaments, the word likely describes many competitive players who were looking forward to the North American Scrabble Competition this weekend in Baltimore.

The tournament was called off in late May after tournament director Art Moore said it had the potential to become a “super-spreader event where just a single asymptomatic attendee could infect hundreds of others” with COVID-19.

The cancellation followed a March 18 suspension of all club activity because of the pandemic.

For Whitmarsh, a nearly 15-year competitive Scrabble player who ranks No. 3 in the state and 64th nationwide, the cancellation was disappointing but not surprising, especially considering his experience at his last pre-pandemic tournament in Holden, Mass. on March 8.

“I could tell coronavirus was starting to make people nervous,” the 44-year-old Attleboro resident said.

Whitmarsh has a bad habit of biting his fingers and was gently warned by a friend to consciously avoid it on the way to the event.

Although he lost half his games that day, Whitmarsh was encouraged by attendance at the event itself.

“We don’t have a lot of local tournaments around here,” he said. “I thought it was the start of something good.”

Then, the pandemic soared with state closures following closely behind.

Now, Scrabble competitors are left wondering when play will resume.

“I don’t see it happening again until we have a vaccine,” Whitmarsh said.

So, for the first time in nearly 15 years, he’s taking a break.

His start in competitive Scrabble was almost an accident. He started playing word games on Yahoo out of boredom and soon realized he was pretty good at it.

While he’s not necessarily a wordsmith, Whitmarsh said he liked the puzzle component, which combines luck with skill in building words and maneuvering plays on the board.

In 2006 he joined a competitive Scrabble club in Brighton. In his first club session he lost all seven games, followed by losing nine games in his third week.

“I got killed,” he said. “But learning Scrabble is mostly trial and error. You study words and after the game there’s a chance to talk to your opponent in a postmortem, so you can learn strategy by doing that too.”

He played in a Boston tournament that spring and, to his surprise, placed first in his division of 48 players — winning 12 of 15 games.

“It just took off from there,” he said.

At his peak he was attending 20 to 30 competitions a year, including the national match. This year will be the longest he’s gone without playing since he began.

And each tournament brought its own slew of experiences.

In 2011, he was one of 15 players from the U.S. to play in an international tournament in Warsaw, where he placed 38th out of 106 players using the international Scrabble dictionary, which includes terms from other countries that also use English.

“I had to scramble to learn other words and didn’t get too far, so I’m surprised I did so well,” Whitmarsh said.

His highest tally of consecutive play is 40 games in three days, where he took first place in a 2013 Delaware tournament of 14 players.

And in 2007, he played in a “red eye” tournament in Minnesota, where players tested their Scrabble endurance by playing 26 games in two days. In a traditional tournament, players space out an average of eight games a day.

Across them all he found one thing to be true: Each game is unpredictable.

“You can sort of expect how a set might go based on how sharp you feel, how much you’ve been studying lately and who is playing. But there is always luck, too,” Whitmarsh said. “There are some games when I think maybe I was lucky I played as well as I did.”

In one notable game, he realized his play of “statues” left him three squares short of a triple-word score, and if he could draw a q, u and an e at the same time, he could extend the word to “statuesque” on his next turn.

Sure enough, he pulled all three tiles from the bag.

But he’s had his share of bad luck, too.

He was down in a late night game in Albany a few years ago when he placed a word through two triple-word score squares (one of the highest-scoring plays possible). “Liquored” was the last play of the night and somewhat of a miracle, Whitmarsh said.

But then his opponent challenged his spelling post-play. Whitmarsh had transposed two of the letters — the o and u — and it would cost him the win.

“It’s a funny story now, but I felt like an idiot,” he said.

In another, he was down one win and six points in the last play of a tournament where he was vying for first place.

“I did everything I could to squeeze those last points,” Whitmarsh said, but he only managed to win by four.

At the end of the day, his ranking as No. 3 in the state doesn’t mean so much.

“I want to win,” he said. “But I’m more concerned with the results of individual games than on my rankings.”

It does take effort, however.

“One piece is learning words,” he said, a chore he doesn’t necessarily enjoy.

Many of the most valuable words are ones unfamiliar in common speech, Whitmarsh said, like his play of “downcast” in 2007.

“The second piece is strategy during the game: Where to play a word, which word to pick.”

Competitors track which letters have already been played, Whitmarsh said, so if there are five tiles left in the bag, you only want to play a four-tile word, otherwise your opponent can assume (and plan around) all five letters on your rack. By leaving one tile behind, you can keep your opponent guessing.

You should keep a few vowels for your final play, he continued.

And play words strategically: If it can be easily turned into a plural, play the word first singular, and then with an “s” on your next turn to score the word twice. It also puts pressure on your opponent to try and block the second play.

“I don’t play Scrabble because I love words,” Whitmarsh said. “It’s because it’s a puzzle, and I like puzzles. The fact that it is luck and skill makes it tricky, and more interesting.”

A bonus is the friends and camaraderie he’s found through it, including another Attleboro resident who he played against weekly until the pandemic hit. Since then, some players nationwide have hosted unofficial online tournaments as a way to help each other stay sharp and connected in a period of isolation.

Whitmarsh played in two, but he prefers the real thing. So for now, he’s letting his brain take a break from the word-searching he finds tedious.