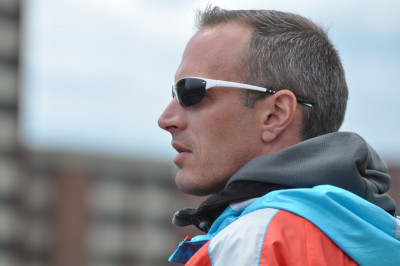 North Attleboro native Gary Gardner, the director of track and field and cross country at UMass-Lowell, is coaching Olympic track and field competitor Ruben Sanca, one of three athletes representing Cape Verde in the London games. (Photo courtesy of UMass-Lowell) 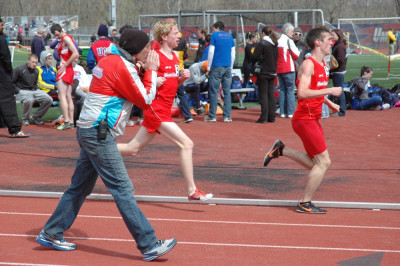 North Attleboro native Gary Gardner, the director of track and field and cross country at UMass-Lowell, is coaching Olympic track and field competitor Ruben Sanca, one of three athletes representing Cape Verde in the London games. (Photo courtesy of UMass-Lowell)

When the Olympics kicked off in London Friday, North Attleboro native and longtime track and field coach Gary Gardner was in the thick of the action at the international sports spectacle.

Gardner is coaching track and field competitor Ruben Sanca, one of three athletes representing Cape Verde in the Games.

The pair flew to London July 23, giving them two weeks to focus on final preparations before Sanca competes in the 5,000-meter trials on Aug. 8 in hopes of advancing to the finals on Aug. 11.

"At this point, it's a little surreal," Gardner, 41, said before he left. "It hasn't quite all sunk in, and I've just been sort of concentrated on getting everything squared away to get over there. I'm sure once we step inside the stadium that night, the nerves will definitely hit."

Though this will undoubtedly be a business trip, Gardner expects that he and Sanca will spend some down time in London watching other Cape Verdean athletes compete, catching up with friends from the international circuit and resting at the Olympic Village, a special housing compound designated for Olympic athletes, officials and trainers.

"We want to get the full Olympic experience, but at the same time (make) sure we're still focused on getting done what we have to get done," he said. "Once you get over there, it's easy to get carried away."

Gardner, who graduated from North Attleboro High School in 1989 and now lives in Auburn, works at UMass Lowell as director of track and field and cross country. He has been coaching Sanca for six years.

Though this is Gardner's first trip to the Olympics, last fall he got a taste of global competition when Sanca competed in the marathon at the World Championships, organized by the International Association of Athletics Federations.

He said the key to competing successfully at an elite level is sticking to the plan.

"After six years you figure out what works and what doesn't work, and not to change what got you there," he said. "You just want to keep things the same as much as you can and keep the nerves down as much as you can. Of course, that's a lot easier said than done."

Sanca's and Gardner's relationship extends beyond that of athlete and coach. Coincidentally - or not - Sanca's first practice with Gardner fell on the day that Gardner's first son, Kiernan, was born.

Sanca has since become a part of the extended family, so it's fitting the two would mark this major sports milestone together.

"Ruben kind of grew up with us," Gardner said. "He came in as a 17-year-old kid, and we're still working together. After this long, and growing up with us and my kids growing up with him, it's become a pretty special relationship."