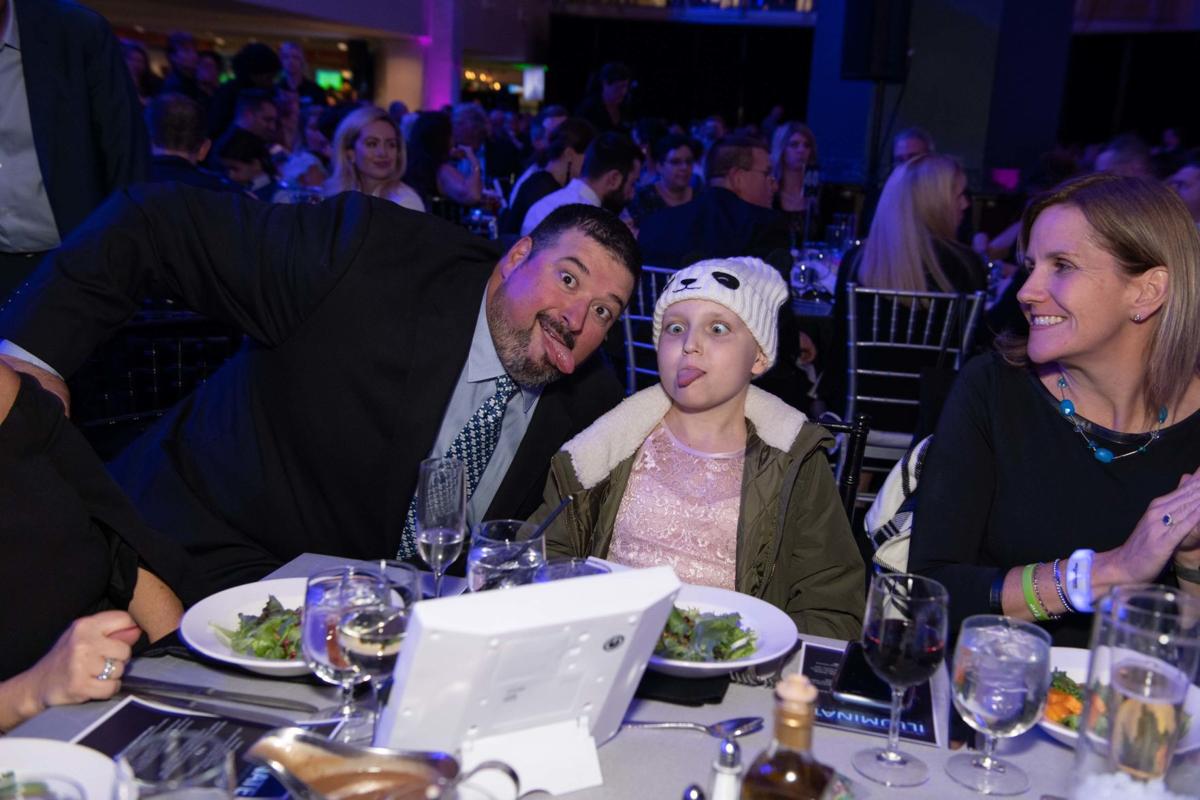 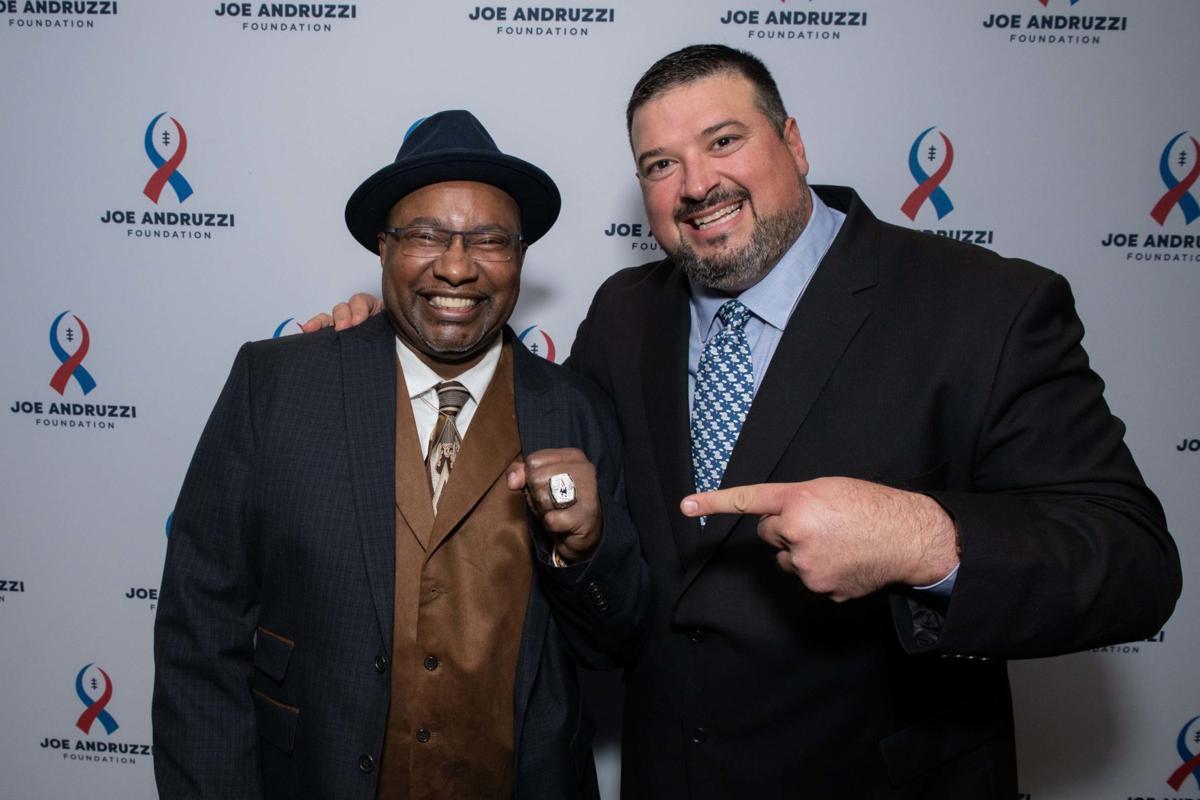 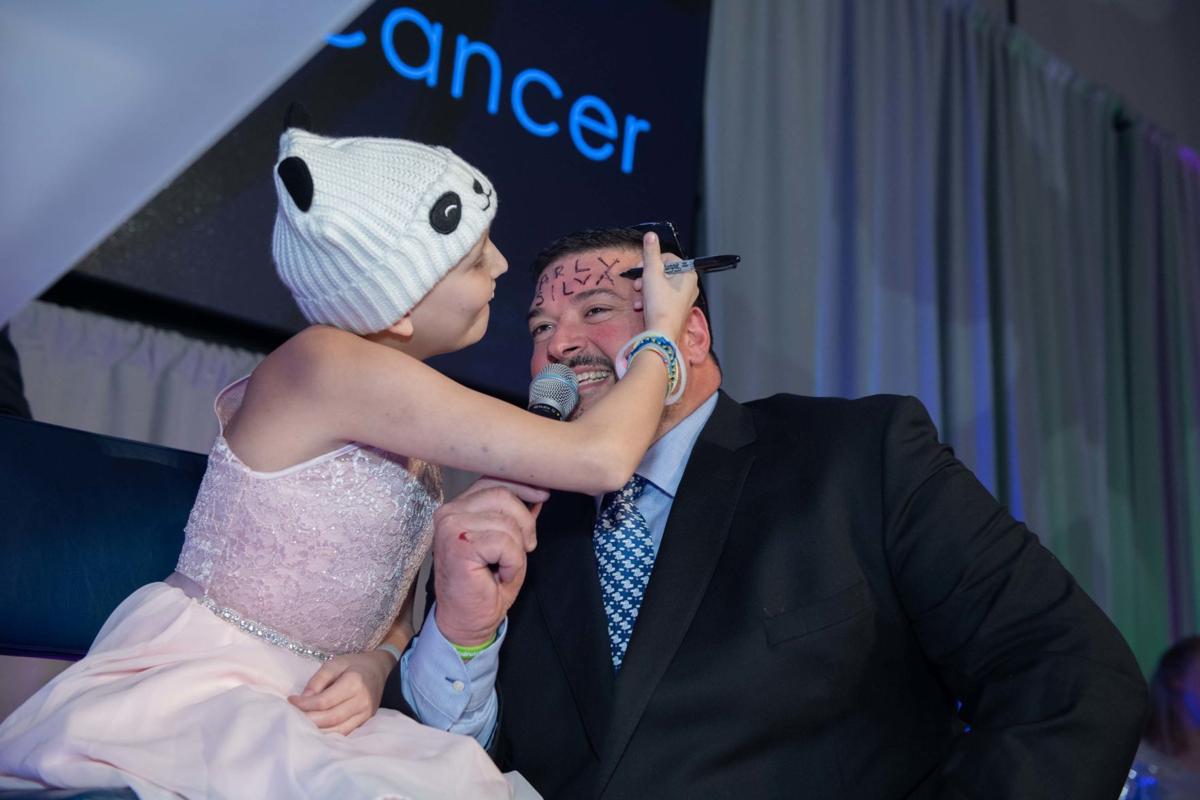 If you see former New England Patriots offensive guard Joe Andruzzi around town, don’t stare at his forehead — no matter how tempting it might be.

Andruzzi, who with his wife, Jen, hosted the 12th Annual Joe Andruzzi Foundation Gala at Gillette Stadium Thursday night, capped off the evening with a 13-year-old cancer patient autographing her name and drawing a smiley face in permanent marker across his forehead.

Andruzzi explained that the prank — which raised $9,000 at the annual fundraiser — was a quid pro quo of sorts, since when the teenager, Carly Silva, attended a Patriots training camp with Andruzzi over the summer, he autographed the top of her head, which was bald due to her cancer treatment.

While Andruzzi’s autograph on Silva’s head only lasted for three days, the Weymouth teen said she hopes her John Hancock remains on Andruzzi’s forehead for a full week — at least.

“That would be funny,” said Silva, who wore a shimmery pink dress and a white and black panda cap.

“She had five hours of chemo today,” said Silva’s mother, Lisa. “It’s been a long day for her, but she wanted to be here. Joe and Jen have been so amazing to her and to our family. They have been a great source of support emotionally and financially.”

That is what the foundation does.

Founded by Joe and Jen Andruzzi in 2008 after the three-time Super Bowl champion waged — and won — a hard-fought battle with Burkitt’s lymphoma, an aggressive form of non-Hodgkins lymphoma, the foundation offers financial help and other forms of support to cancer patients and their families.

In March, the nonprofit organization awarded its 10,000th grant.

The annual gala is the foundation’s largest fundraiser. The live auction — which included a cooking class and dinner at Davio’s with restaurant owner Steve DiFillippo and Patriots safety Patrick Chung, and a seven-night getaway at an eight-bedroom beachfront estate in Mexico — raised more than $100,000. A silent auction was also held, with items that ranged from autographed sports memorabilia to vacation packages. The total amount raised from the gala was more than $1 million.

This year’s theme was “Illuminate: Shining the Light on the Cost of Cancer.”

Several cancer survivors spoke about how the financial support provided by the Joe Andruzzi Foundation afforded them an opportunity to focus on treatment and getting better rather than worrying about bills.

“When I think of them personally and the work they do with JAF … it’s inspiring,” said North Attleboro resident Ed Hurley, who attends the fundraiser every year. “I get the chance, at this event, to hear the stories from people they’ve helped throughout the year. It’s so meaningful and so genuine. Joe and Jen are so giving of their time.”

Former Patriots linebacker Matt Chatham, an on-air analyst for NESN and writer for the sports website The Athletic, said that while many professional athletes raise money for charity, not many continue their philanthropic pursuits at the same level once they leave the game.

This year’s (Up)Beat Cancer award was given to Deborah Toffler, senior director of patient care services at Dana-Farber Cancer Institute, who Jen Andruzzi referred to as the “heart and soul” of patient care at the hospital.

“This is incredibly humbling,” Toffler said after receiving the award. “It symbolizes the partnership we have with JAF and the shared desire to address the financial toxicity of cancer.”