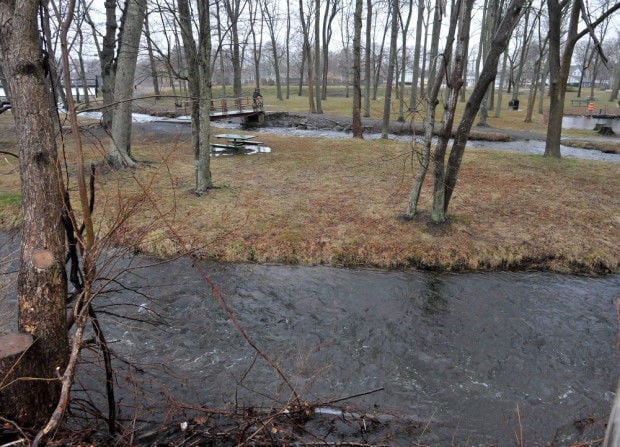 A boy rides his bike over the swollen Rumford River in Mansfield, fed by Fulton Pond, last week. 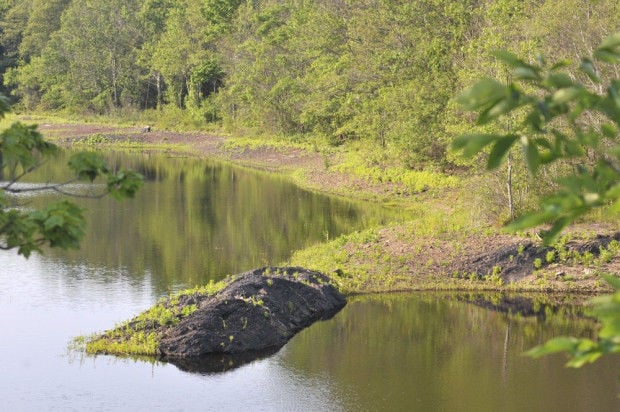 Water levels were down in July at Hoppin Hill Reservoir in North Attleboro, which serves as Attleboro's water supply. (Sun Chronicle file photo)

A boy rides his bike over the swollen Rumford River in Mansfield, fed by Fulton Pond, last week.

Water levels were down in July at Hoppin Hill Reservoir in North Attleboro, which serves as Attleboro's water supply. (Sun Chronicle file photo)

With the state downgrading the Attleboro area's drought status from a Drought Watch to a Drought Advisory, area water restrictions are being eased.

In Mansfield, gardeners and those trying to raise a lawn will benefit from new, more relaxed restrictions announced by selectmen Wednesday.

During last year's drought, the town imposed a complete ban on outdoor water use except for water taken from private wells. Selectmen this week voted to allow lawn and garden watering on an odd-even day basis beginning immediately.

Lawn watering will be allowed from 6-8 a.m. Mondays through Thursdays with odd numbered addresses permitted to water on odd days and even numbers on even days. Under the new rules vegetable gardens can be watered from 5-9 a.m. and 5-9 p.m., also on an odd-even basis.

In Wrentham, the town has also been able to ease some of the water restrictions.

Effective immediately, all outdoor water use is banned between the hours of 7 a.m. through 7 p.m.

But the ban does allow residents to use sprinklers one day per week for lawn watering between the hours of 7 p.m. and 7 a.m. on their scheduled trash days.

Permissive uses such as for irrigation of ball fields and installation of new lawns are still subject to restriction.

The ban also includes the use of private wells.

Contact the Department of Public Works at 508-384-5477 for more detailed information.

And in Plainville, its water and sewer department is keeping its Phase 2 water restrictions in place as a precaution.

Questions should be directed to the operations supervisor of the water department, Dennis Morton, at 508-695-6871 or by email at dmorton@plainville.ma.us.

A Drought Watch is the third of five designations for water status from the state's Drought Management Task Force, with normal the lowest and emergency the highest. A Drought Advisory is the next step down from a watch.

Precipitation the last few months has helped with the region's drought.

Last year ended with precipitation down about 12 inches from normal, with most months since last spring well below average, Attleboro Water Department records show.

It has really been a two-year drought, as 2015 clocked in with just 37.73 inches that nearly made the Top 10 lowest years for precipitation.

The first three months of this year, however, has seen it inching closer to the average of 11 1/2 inches with a total of 9.66 inches.

This month, the average amount of rainfall for April - about 4 inches - fell the first week of the month.

But until Wednesday night and Thursday's rain, there had been almost no rain for nearly two weeks.

The U.S. Drought Monitor no longer classifies the Attleboro area as being in a moderate drought.

"While recent precipitation has helped to reduce the severity of the drought in parts of the state, drought conditions continue and the public is urged to take steps to reduce indoor water usage," Massachusetts Emergency Management Director Kurt Schwartz said. "Recovery from this long-term drought will require both continued conservation measures and above-normal levels of precipitation for the foreseeable future."