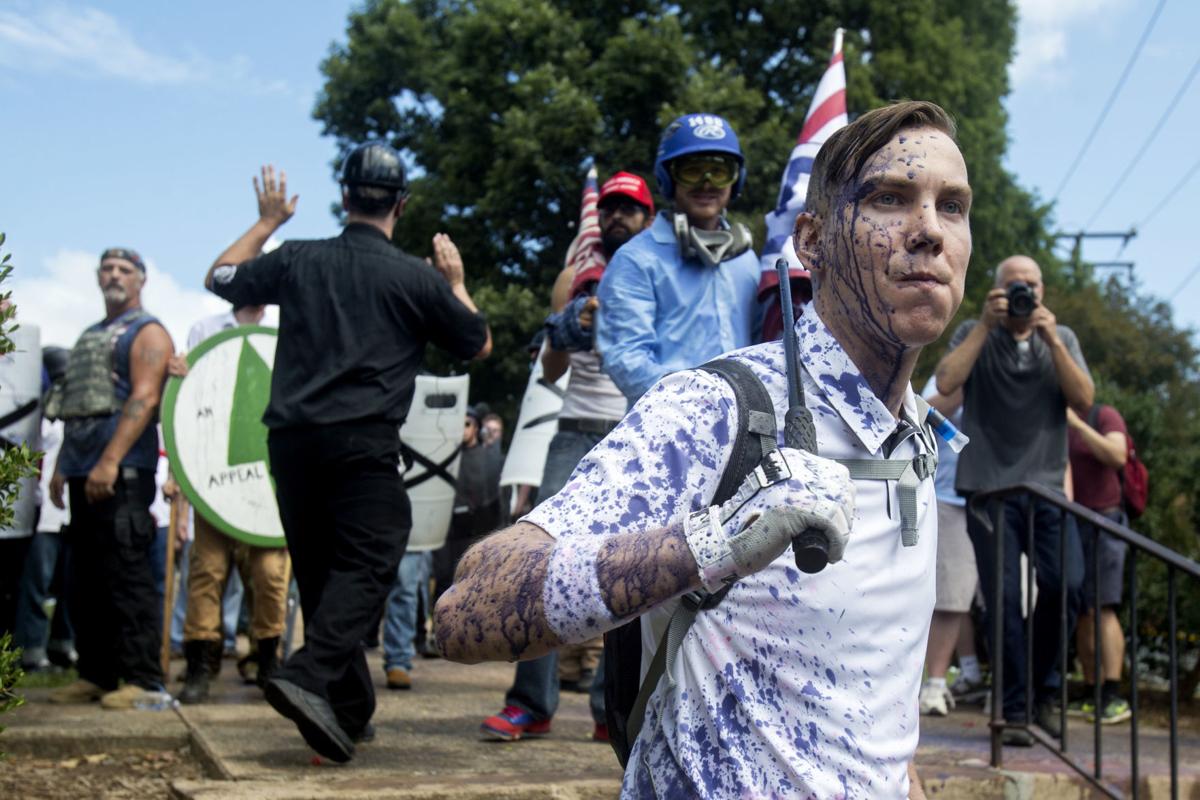 Protesters stand guard in front of the entrance to their gathering during a white nationalist rally on Saturday in Charlottesville, Va. Pictured is Attleboro High School grad Nigel Krofta. 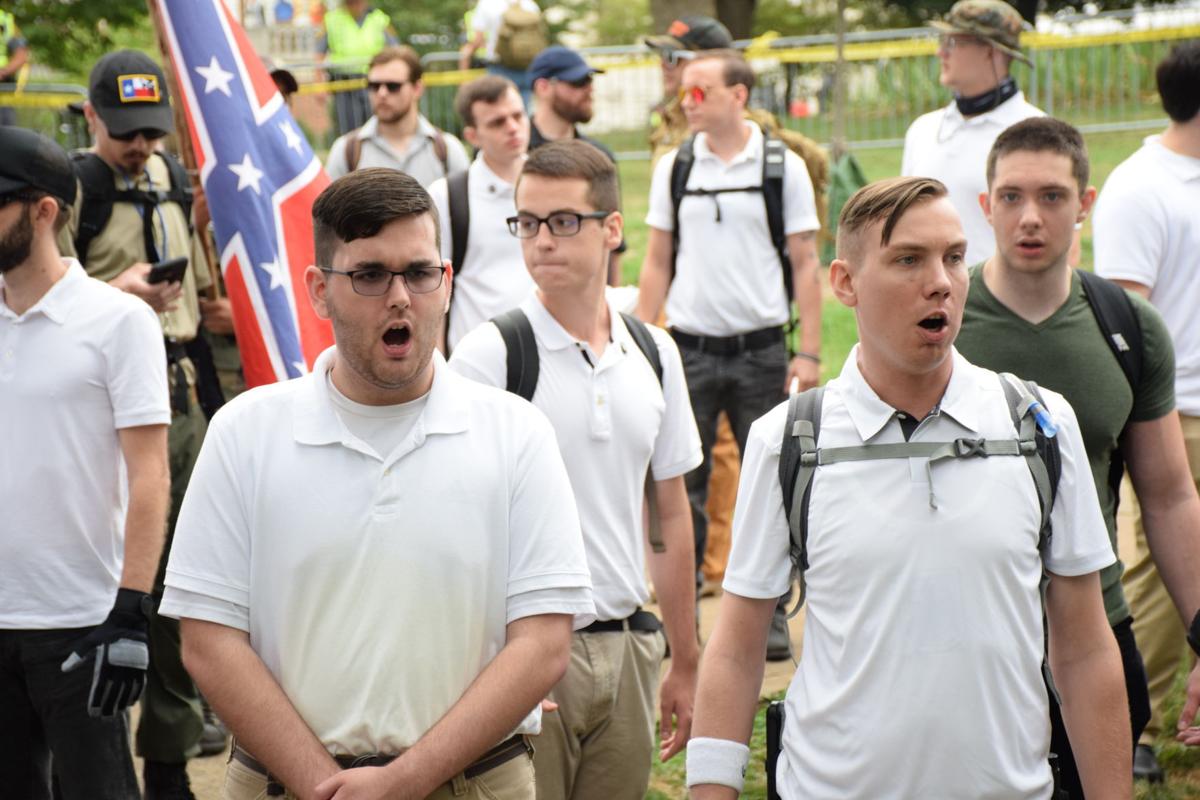 White nationalist Nigel Krofta, right, a 2008 graduate of Attleboro High School, stands alongside James Alex Fields Jr. at the white nationalists rally in Charlottesville, Va. Fields, authorities said, later drove his car into a crowd of counter-protesters, killing one and injuring dozens others. He now faces murder and other charges.

Protesters stand guard in front of the entrance to their gathering during a white nationalist rally on Saturday in Charlottesville, Va. Pictured is Attleboro High School grad Nigel Krofta.

White nationalist Nigel Krofta, right, a 2008 graduate of Attleboro High School, stands alongside James Alex Fields Jr. at the white nationalists rally in Charlottesville, Va. Fields, authorities said, later drove his car into a crowd of counter-protesters, killing one and injuring dozens others. He now faces murder and other charges.

Nigel E. Krofta identifies himself as an “unashamed, unabashed white devil,” and if it were up to him — all of Attleboro would be white.

Krofta, 27, who graduated Attleboro High School in 2008, readily declares himself a racist and neo-Nazi, and participated in the violent rally in Charlottesville, Va., this past weekend.

In fact, Krofta was captured standing next to James Alex Fields Jr. in a photo that would be published by the New York Times. Later in the day, Fields allegedly plowed his car into a group of counter-protesters at the rally, killing a young woman named Heather Heyer and injuring 19 others.

After the photo was shared on social media, former schoolmates, teachers and others in Attleboro recognized Krofta and word spread of his participation. The Sun Chronicle contacted him via Facebook, and he consented to a telephone interview on Tuesday afternoon.

For Krofta, rallying in Charlottesville was something he believed was necessary.

“There is a concerted effort to do injustice to white people — trying to destroy white identity and white culture,” Krofta said.

“We (white people) are under attack.”

Krofta believes the rally was a success from the alt-right perspective he identifies with.

“We did what we set out to do,” Krofta said. “We wanted to show that there are a lot of white people who are fed up with the way things are going.”

And he said he understands why people are scared of the white nationalist movement.

Views espoused by Krofta and others in the white nationalist movement, along with the violence that erupted in Virginia, have alarmed many Americans — including Krofta’s family. On Tuesday they issued a statement to The Sun Chronicle denouncing his views and lamenting his path.

“We condemn, in no uncertain terms, these hate groups and their ideology. The vile and hateful things they stand for, and stood for on Saturday, were never part of our family and have no place in it,” read the statement, issued by Krofta’s cousin, Alex Krofta, 37, also formerly of Attleboro and now living in Western Massachusetts.

“It is saddening and sickening to see a loved one standing for hate and violence, but surely nothing compares to losing a loved one to it. We are so heartbroken for Heather’s family, for the others who were injured, and for anyone else affected by this event and this hatred.”

Michele Lefebvre, 25, of Attleboro, said she dated Krofta in high school and believes his participation in the Charlottesville rally and the white nationalist movement is a shame and an embarrassment to her city.

Lefebvre said Krofta played the trombone in the high school marching band and was musically gifted, but eventually began to march to the beat of his own drum.

According to Lefebvre, Krofta always associated himself with a rebellious crowd and even hung around with some skinheads in high school.

When she saw his photo in the New York Times, standing next to Fields, she gasped.

“I was ashamed — more than that, embarrassed to be associated with him.”

Krofta is currently living in Ridgeville S.C. and, before Saturday’s rally, he worked as a welder and mechanic at Limehouse & Sons Inc. in Ladson, S.C. Once the company saw the photo of Krofta, he was terminated.

In a Facebook post, the company stated, “We do not condone the actions of the people involved in this horrific display that has taken place in Charlottesville, Va.

“We also do not knowingly hire criminals, but when it comes to our attention that we have someone within our organization that fits this description we deal with it in a timely manner. People like this have no place in our society.”

Now unemployed, Krofta said he will continue to advocate for the white race until victorious.

He said the photo in the Times was taken after he had introduced himself to Fields; otherwise, he didn’t speak to him at all. “My relation with James was just introductions, besides that we have no other ties.”

“I just can’t say that what he did was wrong,” Krofta said of Fields plowing into a crowd of counter-protesters. “To say whether it was wrong or right, I would need to know the facts. What I do know is that he had nowhere to go with the car and the area was blocked by protesters.”

Krofta openly admits he is a racist and proudly stands by it.

“My actions are mine and my beliefs are mine,” he said.

“Racism is standing up for your race,” he added. “In a multiracial society there will be people vying for power. We want the black community to have power over themselves, not us.”

“We are being replaced and we are being bred out with miscegenation,” he added.

Krofta said the alt-right will continue to advocate for their causes and that there has been several proposals on how to proceed.

The main goal is to have separation, he added.

Krofta also said he is a strong supporter of President Trump, who denounced white nationalist protesters in Charlottesville but only after saying counter-protesters deserved some of the blame for what occurred there.

“I like him,” Krofta said of Trump. “I mean, Trump gave a voice to a lot of people in this country who didn’t have a voice — so of course I like him. He gave us license to say what we believe.”

ATTLEBORO — As recent events demonstrate, race hatred and tolerance of extremist views has become epidemic in a country where former KKK wizar…