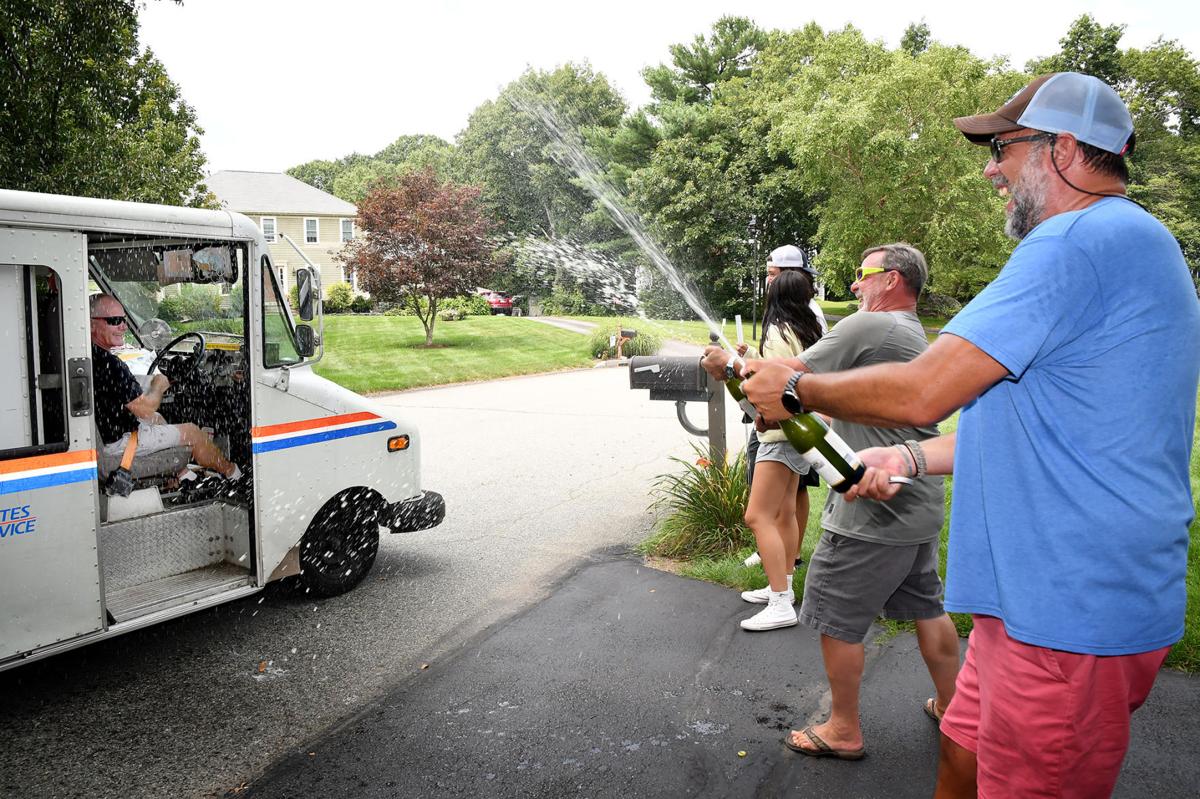 Attleboro mailman Joel Allard delivered his last route Friday after 25 years of postal service. Allard’s route consisted of the Meadowsweet Farms neighborhood where his customers posted signs of congratulations. Steve Guay, right, and his neighbor Don Trudeau spray Allard with sparking cider as Allard pulled up to deliver their mail for the last time. 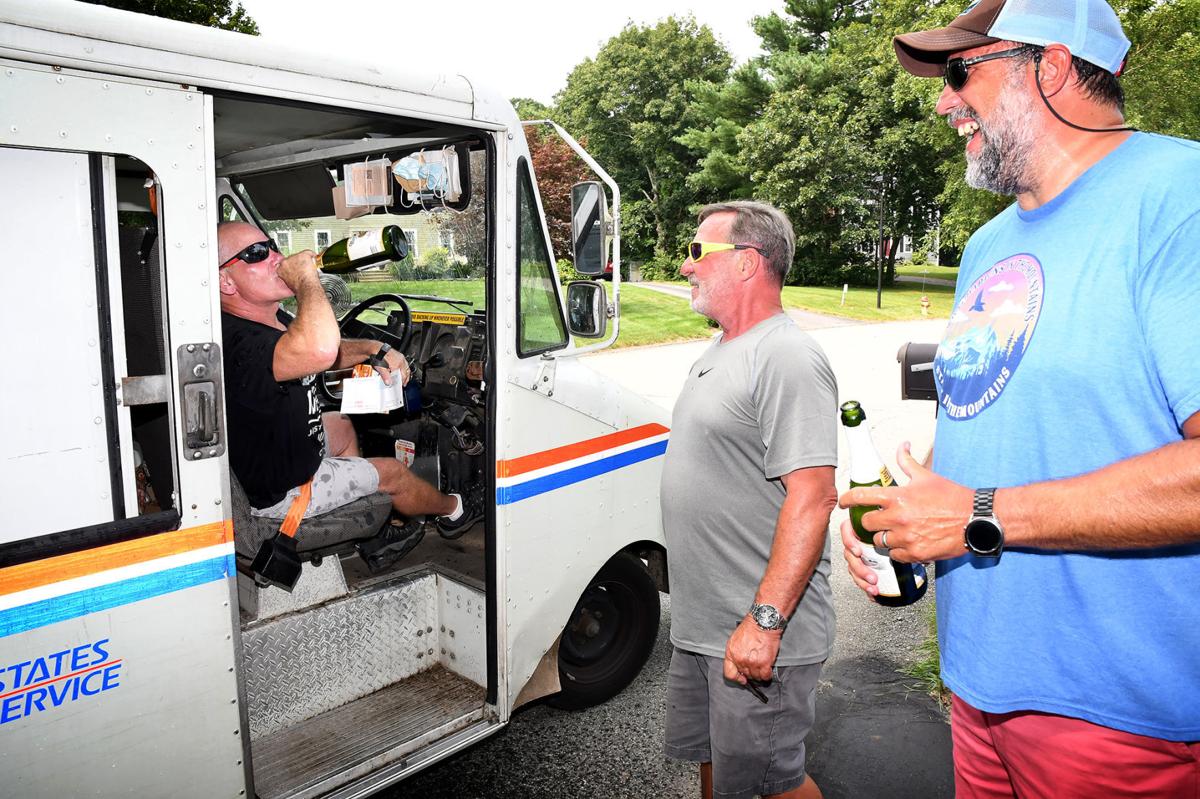 Steve Guay, right, and his neighbor Don Trudeau offer their congratulations and a swig of sparkling cider to postman Don Allard as he delivered their mail one last time. 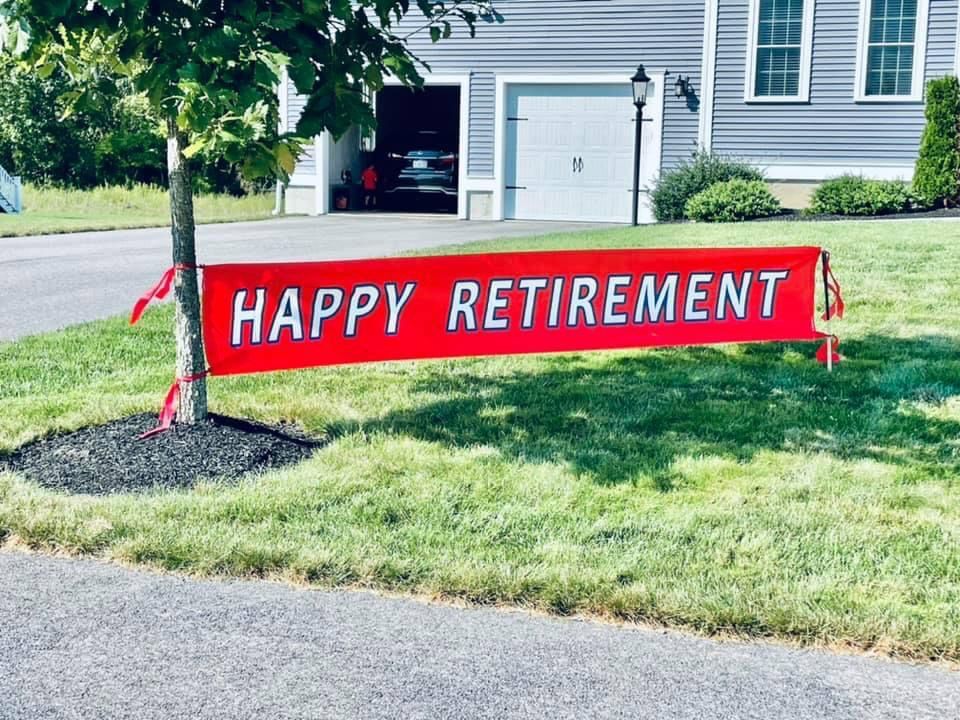 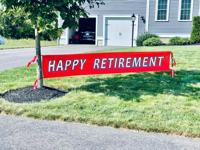 One of the signs in the neighborhood wishing retiring postman Don Allard well in retirement. 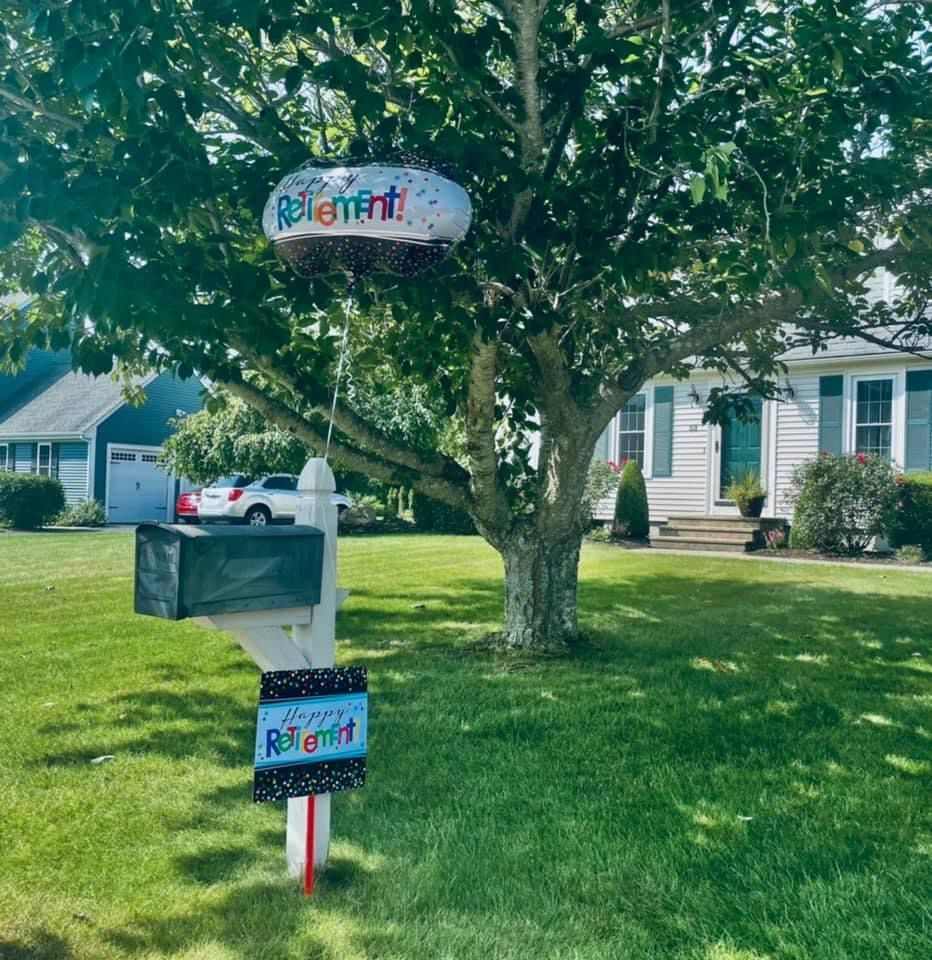 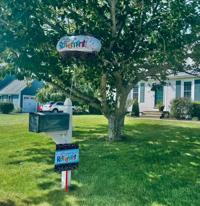 Attleboro mailman Joel Allard delivered his last route Friday after 25 years of postal service. Allard’s route consisted of the Meadowsweet Farms neighborhood where his customers posted signs of congratulations. Steve Guay, right, and his neighbor Don Trudeau spray Allard with sparking cider as Allard pulled up to deliver their mail for the last time.

Steve Guay, right, and his neighbor Don Trudeau offer their congratulations and a swig of sparkling cider to postman Don Allard as he delivered their mail one last time.

One of the signs in the neighborhood wishing retiring postman Don Allard well in retirement.

It comes everyday and not knowing what it may include creates a little anticipation, a little excitement about what may be in that box.

Maybe it will be something fun — a card from an old friend, an invitation to a party or maybe even a check!

But how many people love their mail carrier?

Most don’t know their names and for the most part they are unheralded, slipping from door to door or mailbox to mailbox like daytime phantoms in tiny trucks with tinny engines and steering wheels on the wrong side.

Sometimes the engine noise is the only way the mail customer knows they’re about.

They move quickly and quietly in the heat, cold, rain and snow, delivering whatever needs to be delivered, whether it’s “junk” mail, bills or something better.

They get Sunday off, but that means only one thing, all the more mail for Monday.

And so does the mail carrier.

And there’s one neighborhood that appreciates that effort and loves its mailman.

Meadowsweet Trail is one of the main roads in.

Joel Allard of Cumberland, R.I., has delivered mail to that part of the city for more than 25 years and has worked for the postal service for 28.

His last day on the job was Friday, and many of his customers said good-bye with hand-made signs, balloons and even manufactured signs posted on their lawns — all wishing the 60-year-old a “happy retirement.”

Many said “we’ll miss you.”

Allard said it was heartwarming.

“The outpouring of gratitude is absolutely phenomenal,” he said when a Sun Chronicle reporter tracked him down on Mary Rocha Way.

“I feel like I’m part of the family in this area.”

And in a very real sense he is.

He’s seen babies grow to toddlers and teens and adults who then started careers.

One of the women in the neighborhood was pregnant when he started the 670-customer route 25 years ago.

That baby, a girl, recently took the bar exam to become a lawyer, he said.

“I’ve made life-time friends on this route.”

Steve Guay of Turnstone Drive is one of those who appreciates Allard.

“He’s just a great guy,” Guay said as he stood on his stoop in the sweltering mid-day sun on Friday. “When you go on vacation he’ll hold your mail and deliver it all at once when you come back. If you get a package he’ll bring it right to the door.”

And he takes the time to stop and chat a bit, he said.

Guay has a dog named Duke and dogs are often the bane of mailmen.

But it’s different in this case.

“Duke likes Joel, too,” Guay said. “He’s the only mailman he doesn’t bark at.”

And when Allard’s kids were young, he brought them by on Halloween.

And why not? It’s clearly a candy-rich environment.

Guay’s neighbor across the street is a guy named Don who didn’t want his last name used.

On Friday, he made a special trip to the store to buy some sparkling apple cider.

Don said he planned shake up the bottle and give Allard a non-alcoholic “champagne blast.”

Don and Allard got off to a rocky start.

Soon after Don moved in on a snowy, slippery day 24 years ago, Allard’s mail truck slid into Don’s mail box and broke the post.

But no hard feelings here.

“He’s been a great guy and you can tell he’s liked in this neighborhood,” Don said gesturing to the lawn signs all around.

And Don said he’s well respected because of his veteran status.

Allard served as a paratrooper in the U.S. Army for four years in the 1980s and then served in the reserves until he retired from the service.

He has a wife and a blended family of six kids and six grandkids.

Allard said in his retirement he plans to help his sister take care of their aging mom who has Alzheimer’s disease.

And then there’s the house, which always has a “honey do” list, he said.

“I’ve got plenty to keep me busy,” Allard said.

And while he appreciates the affection from his customers, retirement will be welcome.