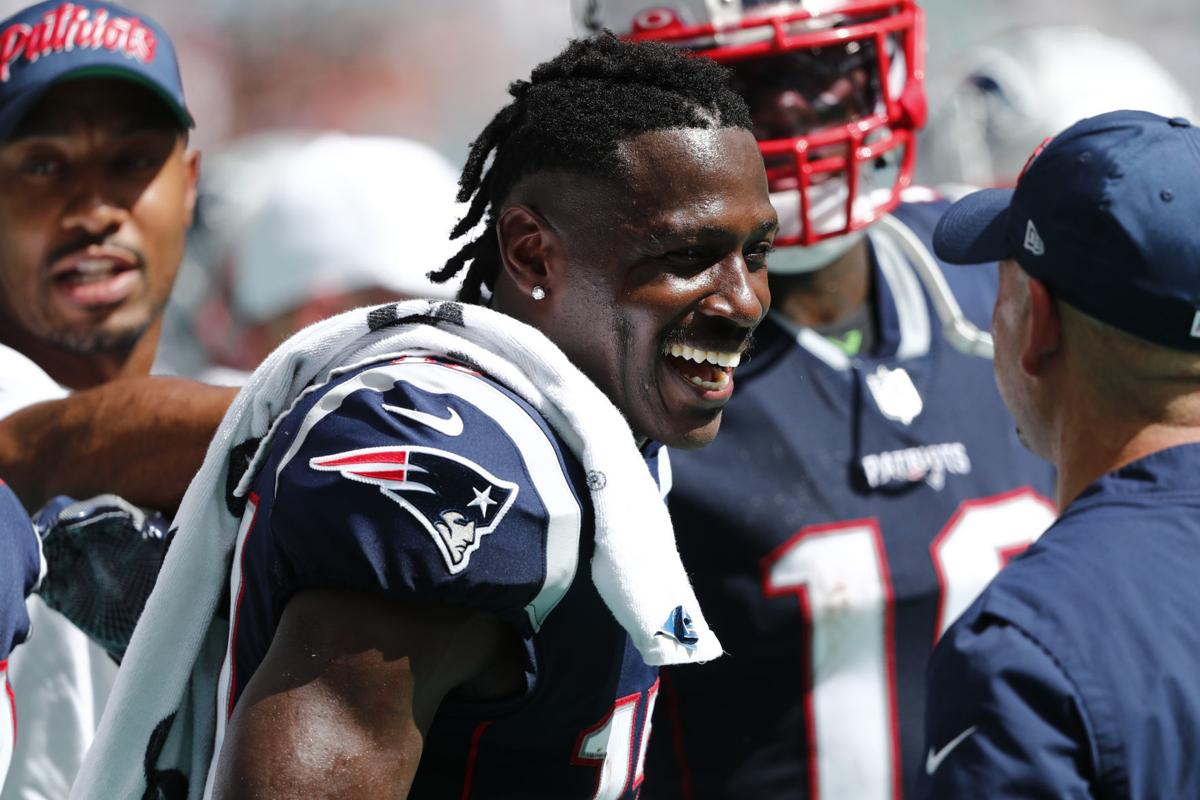 New England Patriots wide receiver Antonio Brown smiles on the sidelines during the second half of Sunday’s game against the Miami Dolphins in Miami Gardens, Fla. 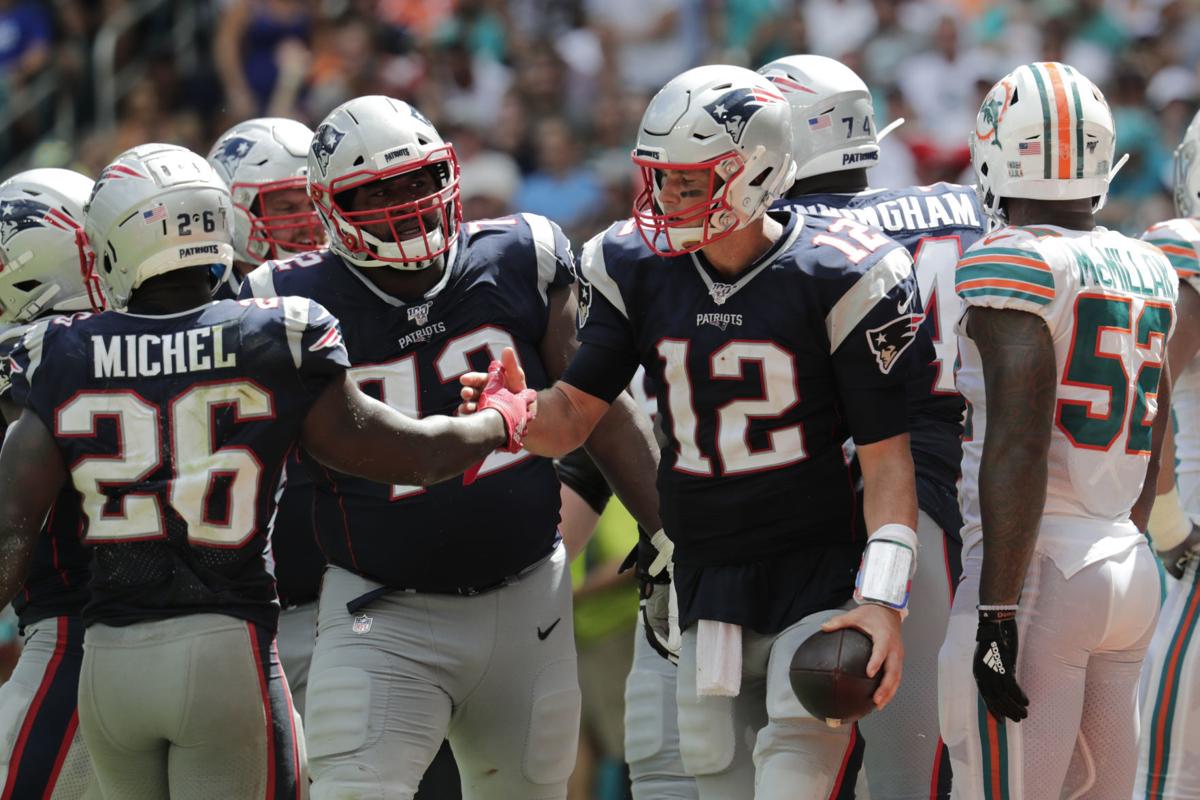 New England Patriots wide receiver Antonio Brown smiles on the sidelines during the second half of Sunday’s game against the Miami Dolphins in Miami Gardens, Fla.

With the addition of All-Pro receiver Antonio Brown, the New England Patriots’ offense had been the biggest storyline around the NFL for much of the past week. And rightfully so. That all changed Sunday.

It changed because of the New England defense.

The Patriots embarrassed the Miami Dolphins 43-0 behind two defensive touchdowns and 30 second-half points. The Patriots’ defense, which recorded a noteworthy four interceptions and seven sacks, has now allowed just three points in eight quarters of football this year. The 2019 team is only the second in franchise history to have allowed 10 points or fewer to start the season (1986 allowed nine).

Receiver Antonio Brown caught his first touchdown pass from quarterback Tom Brady, while cornerback Stephon Gilmore and Jamie Collins each caught touchdowns from Miami quarterback Ryan Fitzpatrick. The first pick-6 of the game was also the first of Gilmore’s career. His 54-yard return gave the Patriots a 30-0 lead with 10:45 remaining. The first of two interceptions recorded by Collins was returned 69 yards to give the Patriots a 37-0 lead less than two minutes later. At the time, the Patriots had 123 yards on two interception returns while the Dolphins had 93 yards of offense.

“It’s always good when you score on defense,” coach Bill Belichick told reporters after the game. “That’s being alert, being aware and taking advantage of opportunities.”

It was a suffocating, one-sided performance that marked a record for the fewest yards allowed through three quarters (38) in Belichick’s 20 years with the franchise. Not a typo. The Dolphins were actually limited to 38 yards in three quarters.

The Patriots intercepted four passes in the second half with Collins (two), Gilmore and Devin McCourty recording his second of the year, which could be half-credited to Gilmore, who made the pass break-up. And the secondary wasn’t the only dominating aspect: the Patriots’ defensive front added seven sacks for a total of 44 yards. Adam Butler (two), Chase Winovich (1.5), Michael Bennett, John Simon, Danny Shelton and Collins (.5) had sacks. The Dolphins were limited to just 3.0 yards per play while they were an abysmal 2-for-15 on third down. Despite finishing with 184 yards of offense, Miami did not cross the century threshold during the first 50 minutes of the game.

The second half, specifically, was especially dominant for the New England defensive unit. The Dolphins compiled minus-13 yards of offense in the third quarter. They quite literally would have had more yards of offense (0) if they did not play in the third quarter. McCourty’s interception came on the third play of the second half. On Miami’s second drive, the Dolphins traveled backwards two yards due to a sack by Shelton. On their third possession, the Pats recorded consecutive sacks by Butler and then Winovich/ Collins. It forced Miami backwards 11 more yards. Gilmore’s interception for a touchdown and Collins’ interception for another TD came on consecutive Miami possessions to start the fourth quarter.

In three quarters of play, Miami ran two total plays in Patriots territory. The first went for no gain and the second went for a sack by Butler.

“They were spectacular as always,” Brady told reporters after the game. “It takes some pressure off the offense. They’re doing an incredible job.”

The Patriots’ offense was nearly as impressive. Brady was 20-for-28 for 264 yards and two touchdowns while connecting with seven different receivers. Brady’s first touchdown pass of the game came on a perfectly-placed back-shoulder throw to Antonio Brown. Brown caught the first three balls thrown his way during the Patriots’ first scoring drive, but finished with four receptions on eight targets for a team-high 56 yards. It was a promising start for the quarterback-receiver combo, but still showed there’s clearly work to be done on the communication side of things. Julian Edelman caught all four balls thrown his way for 51 yards, and Phillip Dorsett continued to look as reliable as anyone on the field, catching all three balls thrown his way for 39 yards. Sony Michel bounced back following a rough Week One as the second-year running back rushed for 85 yards on 21 carries with one touchdown. Brown also took a first-half jet sweep for a five-yard first down.

Among the few bad performances was kicker Stephen Gostkowski. He missed two extra points and a 48-yard field goal. The offensive line depth was also tested for the Patriots with left tackle Isaiah Wynn leaving in the first quarter with a foot injury.