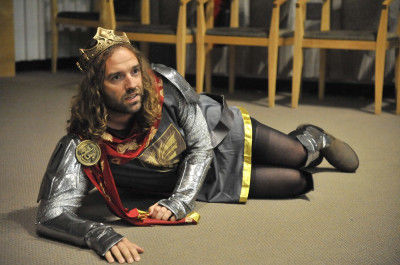 Chris Gaertner of North Carolina performs as King Arthur during Sunday's Mythcon activities held at Wheaton College in Norton. He won the "Once and Future King Award" for his costume. 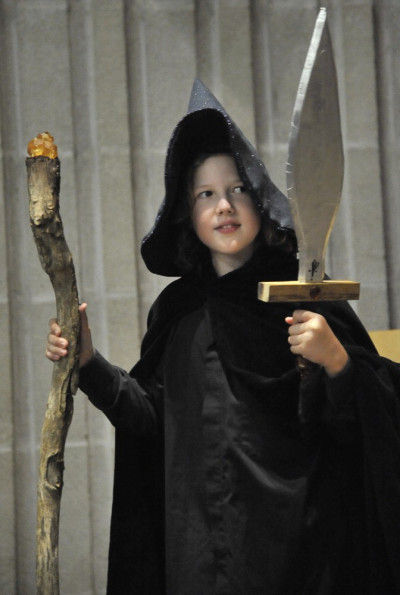 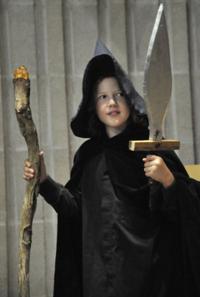 Aidan VanLoo, dressed as Young Gandalf, a character from J.R.R. Tolkiens Lord of the Rings, takes part in the Masquerade Presentation at MythCon at Wheaton College Sunday. 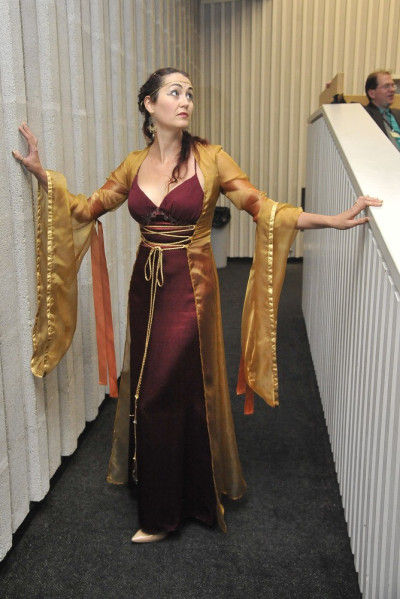 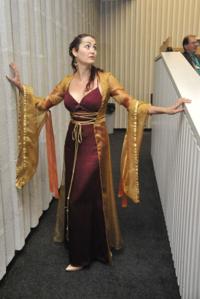 Sorina Higgins from Kutztown. Pa., readies herself from the Masquerade Presentation at Wheaton College Sunday.

Chris Gaertner of North Carolina performs as King Arthur during Sunday's Mythcon activities held at Wheaton College in Norton. He won the "Once and Future King Award" for his costume.

Aidan VanLoo, dressed as Young Gandalf, a character from J.R.R. Tolkiens Lord of the Rings, takes part in the Masquerade Presentation at MythCon at Wheaton College Sunday.

Sorina Higgins from Kutztown. Pa., readies herself from the Masquerade Presentation at Wheaton College Sunday.

NORTON - Wheaton College became a playground for those who love the works of author J.R.R. Tolkien over the weekend.

The 45th annual Mythcon, a conference based on fantasy and mythic literature topics organized by the nonprofit Mythopoeic Society, drew 150 from around the world seeking to immerse themselves in the world of their favorite author.

The conference's theme, "Where Does Fantasy Fit," discussed the place of fantasy in the literary world, which continues to defy a true definition and category in world culture.

The event, which began on Friday and concludes today, featured panels discussing papers presented by other scholars, as well as a banquet, an evening Bardic Circle, a masquerade and a late-night game of Golfimbul on the college's Dimple.

The college environment provided a way for Tolkien and fantasy fans to learn more about their chosen genre while meeting new friends who shared a common interest.

Mythcon does not have a costume requirement in order to attend, but rather requires participants to have an eager mind yearning to learn more about the genre of fantasy and their favorite authors.

Sara Hayes of Nashville, Tenn., was one of the presenters who has been an avid reader of Tolkien's works since she was in high school.

A highlight of the event occurred on Sunday night, where guest speaker, author Ursula Vernon, regaled the audience in the Hindle Auditorium as she discussed the influence of C.S. Lewis, and the world of fantasy novels, and how it led her to become a fantasy children's book writer.

The parallels between Tolkien's world, and its appeal to thousands of readers, and Vernon's literary influences, were obvious in the fact that Tolkien loved the fantasy world he created, which was palpable to anyone who had read his books.

"A really good fantasy will open a space in your head, and put a world inside of your head," Vernon said. "If the reader gives you the gift that your world matters to them, that's huge. When you go on a huge epic adventure ... it has to matter."

After Vernon's presentation, awards were given to seven participants who dressed in costume as characters from Tolkien's books or from the fantasy genre in general and participated in the masquerade.

For instance, Sorina Higgins of Pennsylvania won the "Best Use of Ribbons and Rope" award for her King Arthur legend Morgana costume, and the "One Who Is Too Bright To Fade" award went to Audrey Tibbets, who was dressed as Galadriel from "Lord of the Rings."

Mythcon chair and Wheaton professor Michael Drout is a lead scholar of Tolkien's work and was a guest speaker at the 42nd annual Mythcon, which was held in Albuquerque, N.M. in 2011. He was instrumental in bringing the conference to Wheaton for the first time.

"You get a wide variety of people here," Drout said. "You deal with experts in field in an atmosphere of goodwill."

What also moved Drout was seeing the enjoyment of the scholars and fans who could gather in one setting to learn and share their common ground.

"The biggest enjoyment is watching people have fun that you've facilitated," Drout said. "There's some interesting and eccentric people ... and it's an enormous opportunity to learn and to teach."