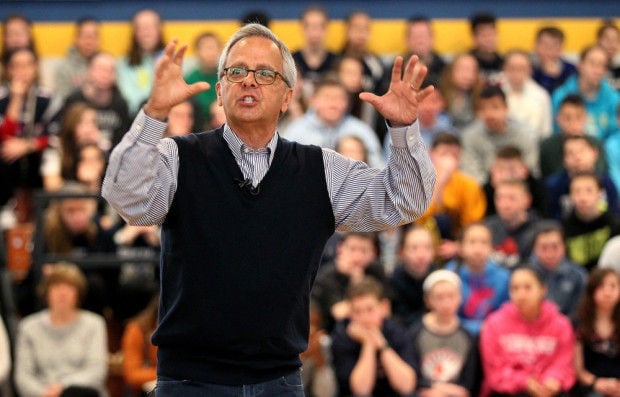 Author and sportswriter Mike Lupica tells Ahern Middle School students of the influence reading books has had on his life during a presentation in the schools gym on Wednesday. (Photos by Paul Connors) 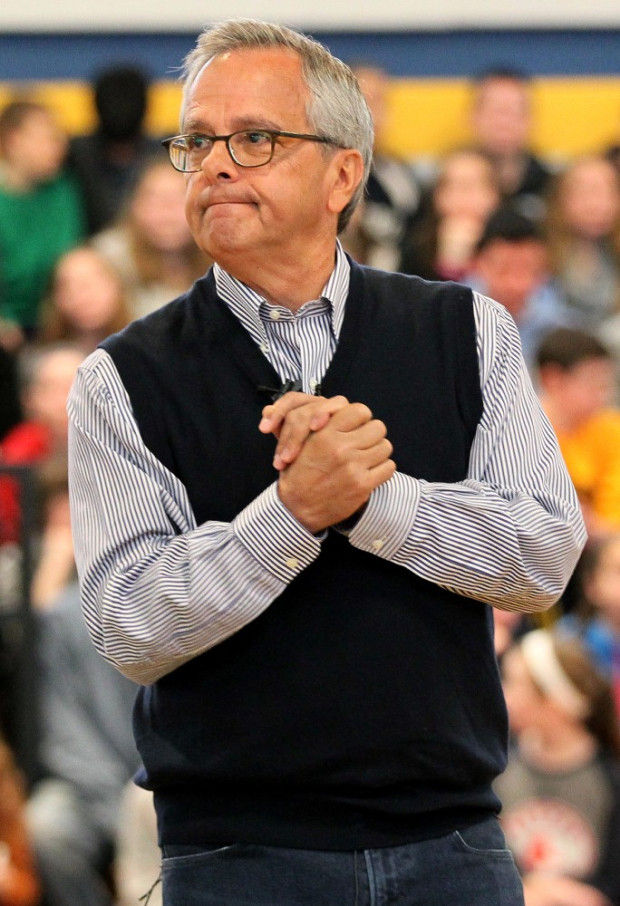 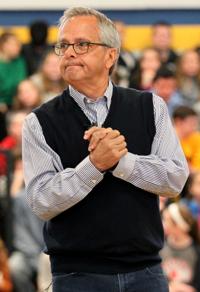 Author and sportswriter Mike Lupica tells Ahern Middle School students in Foxboro of the influence reading books has had on his life during a presentation in the school's gym in Foxboro. (Staff photo by Paul Connors)

Author and sportswriter Mike Lupica tells Ahern Middle School students of the influence reading books has had on his life during a presentation in the schools gym on Wednesday. (Photos by Paul Connors)

Author and sportswriter Mike Lupica tells Ahern Middle School students in Foxboro of the influence reading books has had on his life during a presentation in the school's gym in Foxboro. (Staff photo by Paul Connors)

FOXBORO - If there's one thing the protagonists in Mike Lupica's books have in common, the writer said, it's that they all get knocked down.

"I'm going to ask my main character, whether it's a boy or a girl, to overcome stuff," the sportswriter and author told a crowd of Foxboro middle-schoolers Wednesday. "Anybody in this gym can be a world champion at getting knocked down."

Lupica, the author of 31 books, visited Ahern Middle School on Read Across America Day to say that through resilience, everyone has a story to tell.

He said that's especially true in sports, his usual subject.

Lupica is a longtime columnist for The New York Daily News who, since 2004, has written 20 sports-themed books aimed at young readers.

His characters, he emphasized, are ordinary young people who turn small moments of setback into tales of overcoming adversity.

A great story doesn't need vampires, wizards or werewolves, Lupica said - though he quipped, "As soon as I figure out how to put a werewolf on quarterback, I'm going to do it."

Lupica recalled how he first got into penning books for young people, after decades writing for adults.

His son, 12 at the time, had received a letter saying that he had been cut from a travel basketball team that Lupica said was looking for larger players. It was the first time sports would knock down his son.

It occurred to Lupica that he could organize a team for the boys who had been cut, and give them the season they were missing out on. He hired a coach, and coordinated with other teams to arrange games.

The trouble was, he said, he didn't ask how good the opponents were. He recalled the boys trailing by as much as 35-3 at halftime.

"These kids feel worse now than when they got cut," he remembered thinking. "This is like a science experiment that has gone horribly, tragically wrong."

But the team started to get better with each game, and in their final matchup, a last-second free-throw gave them a one-point victory.

The experience became the inspiration for his first book, the New York Times bestseller "Travel Team."

Lupica said his wife was thankful he could finally use his immaturity to help his family.

As his son's team's eventual triumph started from a disheartening letter on the kitchen the table, Lupica said every great sports moment, from the Miracle on Ice to the Red Sox 2004 World Series victory, began with a small turning point.

"At the end of the day, sports is in the memory-making business," he said.

Questions from the students allowed the conversation to veer from his main themes.

Lupica declined a request to "dab on 'em," a dance used to flaunt one's swagger, but invited the student who asked to do so, himself, in front of the packed gymnasium.

In a gym that had been filled with ballot boxes just a day before, presidential politics were still on the minds of even middle-schoolers.

One of the day's last questions: "Do you support Donald Trump?"

"I've known Mr. Trump for a long time," he said, prompting some boos from the bleachers. "I like him as a person, but I cannot subscribe to some of his beliefs."

Despite the digressions, his main point remained the power of a good story despite the dominance of smart phones, the Internet and video games.

"With all that stuff, there is no greater magic than Page 1, Chapter 1 of a book you want to read," Lupica said.