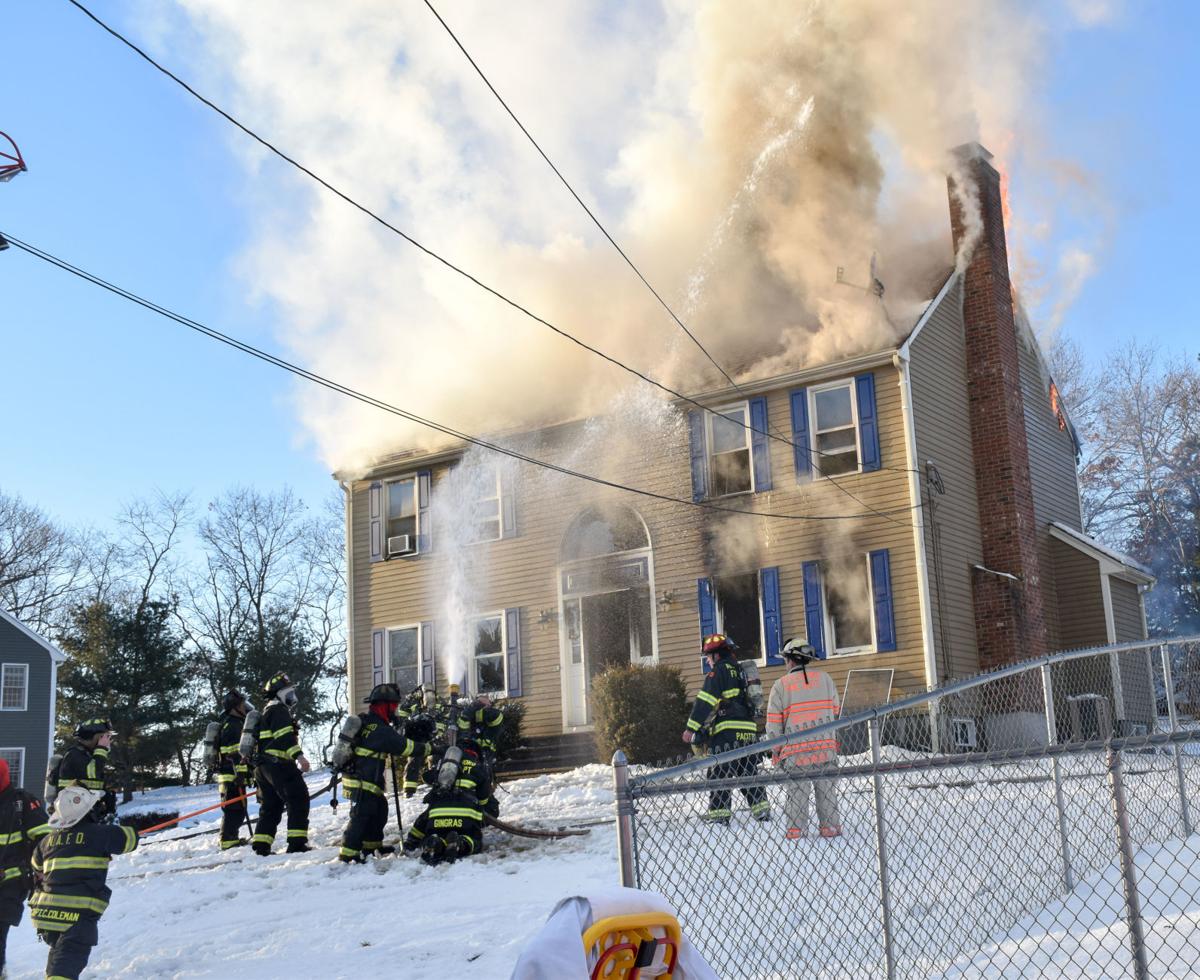 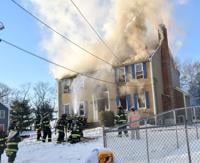 Firefighters battle the blaze at 19 Tanya Drive in Attleboro on Saturday afternoon. 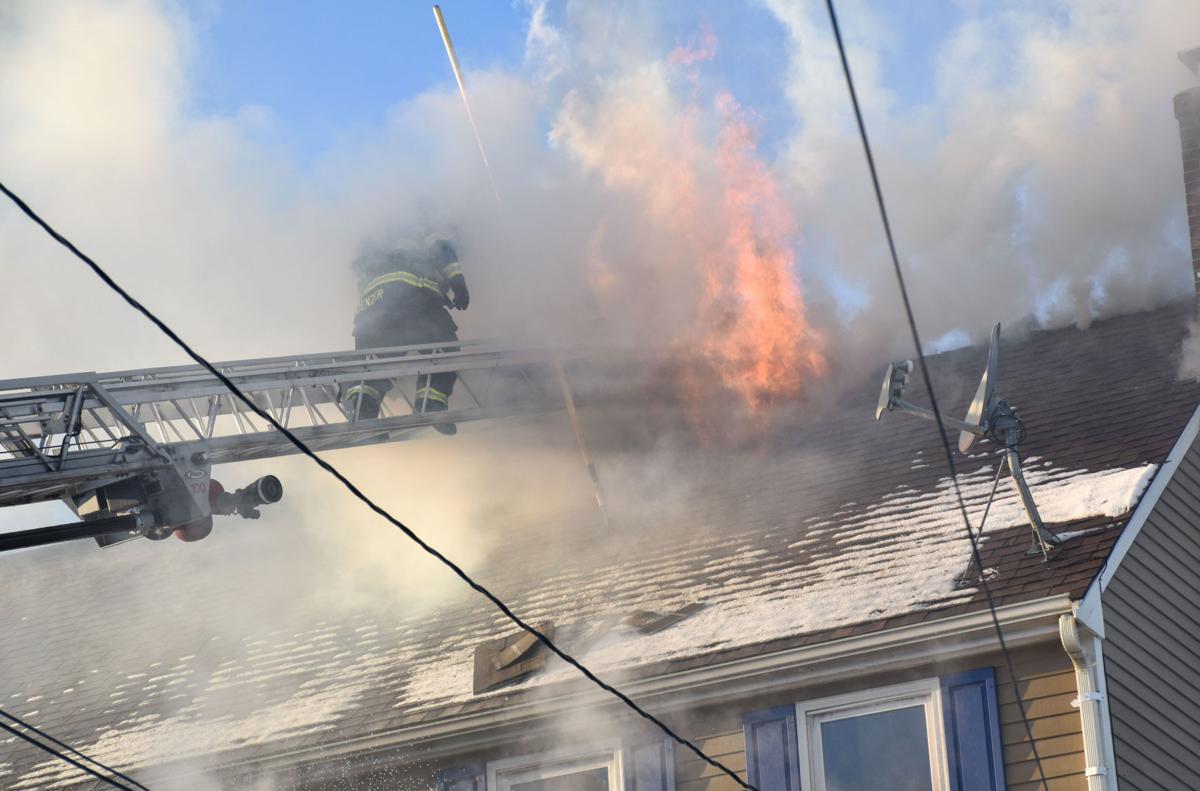 A firefighter atop an aerial ladder works to extinguish flames at the roof line of the home at 19 Tanya Drive in Attleboro. 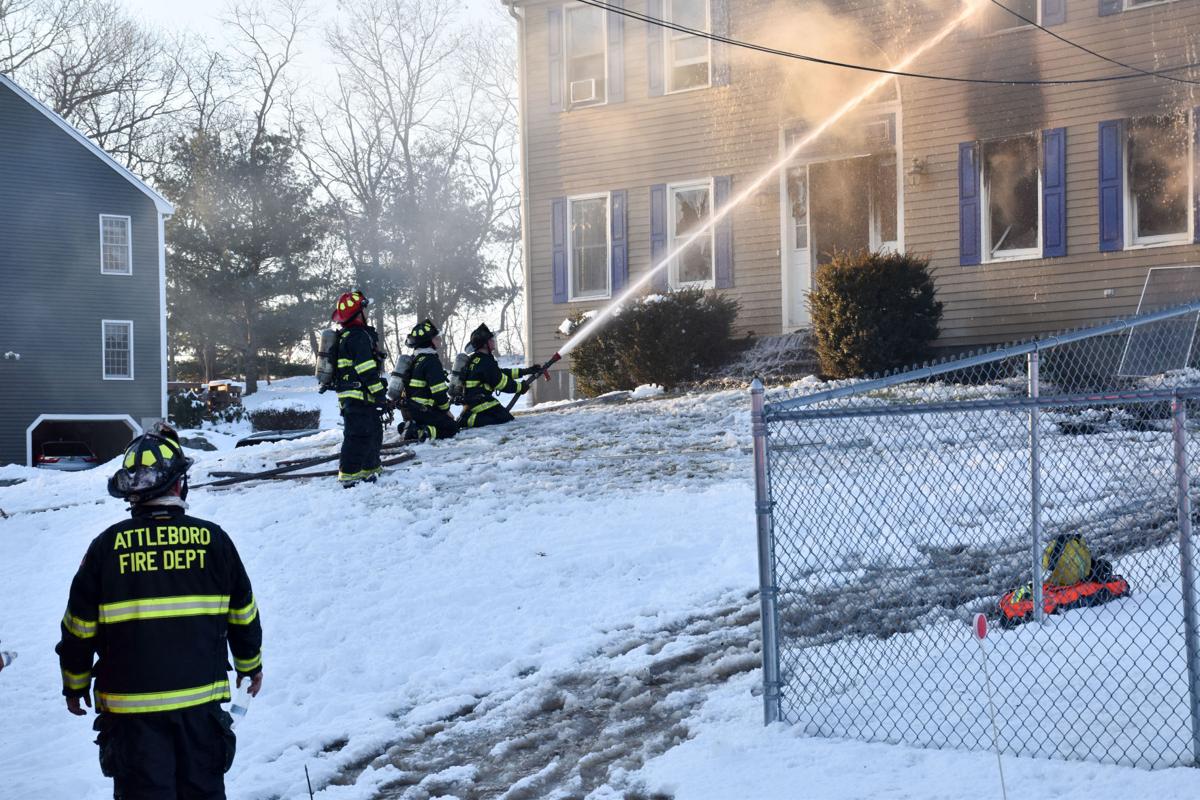 Firefighters train a hose on a fire at 19 Tanya Drive in Attleboro on Saturday.

Firefighters battle the blaze at 19 Tanya Drive in Attleboro on Saturday afternoon.

A firefighter atop an aerial ladder works to extinguish flames at the roof line of the home at 19 Tanya Drive in Attleboro.

Firefighters train a hose on a fire at 19 Tanya Drive in Attleboro on Saturday.

ATTLEBORO — At least seven people in a multi-generational household were displaced Saturday afternoon when a fire ripped through their home — the fourth fire since Christmas Eve in the area.

As firefighters poured water on stubborn flames at the home at 19 Tanya Drive about 3 p.m. Saturday, a lone man, dressed only in the clothes on his back, and wearing a face mask stood in the middle of the street, shaking and crying.

When asked if the man was alright, he could only respond that his house was on fire and that everyone had gotten out safely. Tanya Drive is off Read Street.

Firefighters from the South Attleboro fire station sounded a Code Red which sent more equipment and firefighters to the scene.

As crews from the ladder truck were working to cut the hole into the roof to vent the smoke, other firefighters were training hoses on the rear of the house where the fire is believed to have started.

As flames began to burst through the roof, fire crews working inside the house were ordered out of the structure for their own safety.

At least three large hose lines were trained on the blaze as firefighters worked to contain the flames that broke through the roof line of the two-and-a-half-story, wood-framed house, collapsing about a third of the roof.

About 40 minutes later, the man, now covered with a blanket provided from an ambulance, was able to explain he had just returned home when a family member spotted something bright.

The man, who didn’t give his name because fire investigators led him away, was able to say there were multiple people in the house and everyone made it out safely.

Deputy Fire Chief David Charest said there were multiple calls, at least one from a neighbor and another from a family member who ran to a neighbor’s home.

He said the house appears to be a total loss.

Charest said there was also a structural collapse of the roof.

He said fire investigators are looking for the cause of the fire, which possibly started in the rear of the property in a three-season room.

Charest said he didn’t believe there were any smoke detectors in that room, giving the fire a chance to get going.

While seven people are listed as displaced, a total of eight people live in the house. One person is away at college, he said.

Charest said the American Red Cross was at the scene offering aid to the family.

Dawn Bender of 437 Read St., said her two teenage children saw the smoke and flames from the deck of their house and called 911.

The Bender family also came out with blankets and shoes and whatever else they could provide for those who were displaced by the fire.

A next-door neighbor took those from the fire-ravaged house indoors to protect them from the cold while the firefighting efforts were underway.

The three victims were hospitalized in the burn unit at Rhode Island Hospital in Providence.

A fundraiser has been created at gofundme.com/f/family-injured-during-a-flash-fire-on-new-years, for the Amaral family, who live on Rocky Hill Road.

Also, in North Attleboro, six people were forced out into the snowy cold on Christmas Eve by a smoky, two-alarm fire.

That fire destroyed a car in the garage at 693 High St., and there was heavy smoke damage to the home. There were no injuries in that blaze.

A small fire, which was ignited by a stove burner, also damaged a room at the Pineapple Inn in North Attleboro on Jan. 4.

ATTLEBORO — A GoFundMe account has been set up to help two families displaced by a fire in their home over the weekend.